Just a few book and comic reviews this time, all stuff related to Oz or video games. 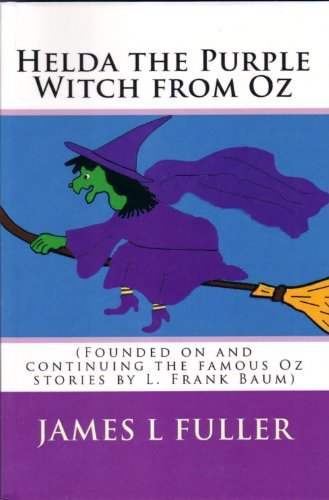 Helda the Witch of Oz, by James Fuller – This is a series of five books, each one with a different color in the title: Purple, Red, Yellow, Blue, and Green. They chronicle the adventures of Howard Diggs, a great-nephew of the Wizard of Oz living in Oregon, along with his wife Ida and their nieces and nephew. A woman named Helda Smith, who appears to be a witch but really just has a knack for discovering potent and often dangerous magic. She kidnaps Ida to be her cook, and Howard uses a box of magic that he got as a gift from his famous uncle to bring his vacuum cleaner to life and ride it to Oz. Both the Nome King and the King of the Winged Monkeys are obsessed with the flying vacuum cleaner, and Helda successfully argues that she isn’t a real witch. In the next book, Howard’s nieces and nephew use the existing magic to bring a carpet sweeper to life as well, and future titles mostly involve someone in Oz, like Bini Aru or Ruggedo, wanting to get their hands on the flying machines and their relatives coming to save them. There’s also quite a bit on the Wizard’s development of Magnoflex cars, which fly due to magnetic fields, and I guess are kind of a less wacky version of Scalawagons. And one of the books has a crossover with Peter Pan. I found the stories to be somewhat on the slow and repetitive side, like they might have worked better as one or two more compressed books instead of telling the same basic tale several times.

Dragon Quest Monsters+, Volume 3, by Mine Yoshizaki – This one gives us several new characters, with Kleo still involved but not always the focus. Another Monster Master, the tough, angry Dino from DeadTree, who uses beast monsters, is seeking to challenge both Kleo and Terry. And Terry himself is studying the Secret of Evolution to make much stronger monsters.

There are also some other Monster Masters who will likely become more prominent later, including a ninja named Scarab and a mysterious girl called Marumo. And Kleo runs into a swordsman named Loran who might be the hero of DQ2. It’s not totally clear yet, but he looks the same, has a name that’s sometimes used for that character, and is pursuing a monster called Pazuzu. Loran is also the name for a kingdom in <a href=https://vovatia.wordpress.com/2011/12/22/the-roto-ry/the Emblem of Roto manga, Loran is also the name of a kingdom built by descendants of Erdrick on the ruins of the Dragon Queen’s castle; and Dino is the full name of Dai in Dai no Daibouken. I don’t know that there’s any connection there, though, other than the franchise liking to reuse names. Similarly, there’s a brief appearance by a guy called Robbin’ Hood, which is the name in the newer translations for the character who used to be Kandar, but whether it’s the same person every time or just the same type is never stated.

But I do appreciate how the manga, like the Monsters series itself, crosses over with pretty much every main series DQ game at some point. 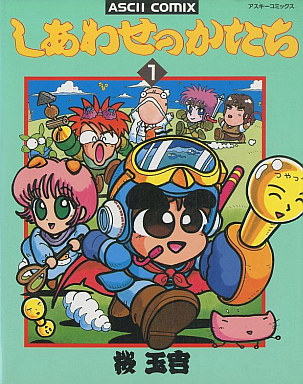 I’ve looked at some Metroid comics before, but I don’t think I’d come across The Shape of Happiness before. Drawn by Tamakichi Sakura, who also did the Super Mario Adventures comic, it’s an anthology of jokey takes on several different video games, but as far as I know only the Metroid chapters have been scanned and translated. There is a mention here that other games adapted in the volume include Castlevania, Gradius, and a shoot-’em-up game called Moero TwinBee. Anyway, Samus Aran infiltrates the employee cafeteria on Zebes, runs into the fake Kraid wearing a wig, and takes so long getting to Ridley that he dies of old age (the last joke being so ridiculous that even the comic criticizes it).

She also has an armadillo-like pet named Mari Yoshimura #2, possibly named after the actress, who is killed by an assassin. While I’ve never been any good at Metroid, I did watch people play the first game, and it seems like the fake Kraid might be harder to find than the real one. Incidentally, Emblem of Roto has a character named Aran, a descendant of Erdrick originally given the ill-fated name Jagan, but it might just be a mistranslation of the name Alan. Samus’ own last name apparently comes from the real name of the soccer player Pele, Edison Arantes do Nascimento. But if Samus is descended from Erdrick, that would be a fun crossover. I guess they’re both represented in Super Smash Bros. 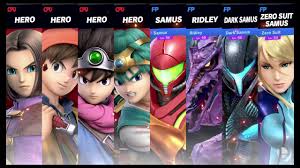