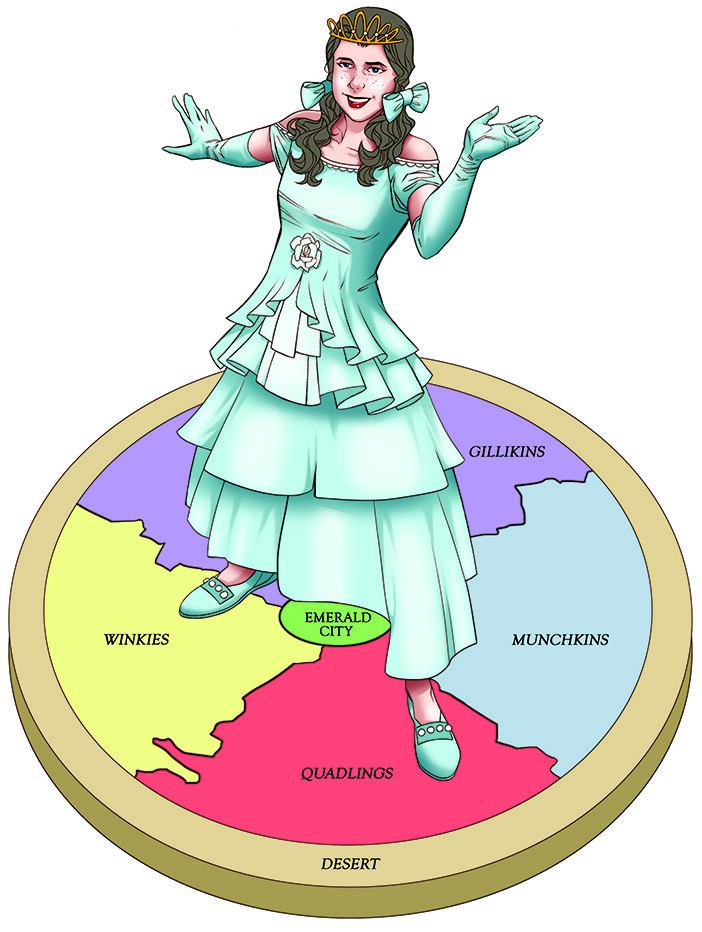 Picture by Jimmy Robinson
I had observed before how L. Frank Baum didn’t do a whole lot with the Gillikin Country after introducing it The Marvelous Land of Oz, then had a lot happen there in his last three Oz books. This led me to make a spreadsheet of which of the four Oz countries are featured significantly in which books. I’m not sure how to get the spreadsheet itself to show up in a WordPress post, but I can send it to anyone who’s interested. The problem is, there’s often a lot of room for interpretation. For instance, the trip through the Munchkin Country in Ozma is very brief, but long enough for the major characters to pay a visit to Jinjur. Should that count as much as when someone is in the Winkie Country just to visit the Tin Castle, which I did include, or not? What about the visits to the Wogglebug‘s College in Emerald City or Glinda’s palace in Glinda? I reasoned that they don’t really count because the journey to and from these places is barely mentioned (in the former it’s right on the border of the Emerald City territory and Quadling Country, and the latter is reached by quick Sawhorse trip), but that’s debatable. I’m really not big on statistics anyway, which is to say I’ll freely acknowledge that they’re important, but they tend to be meaningless to me without a heavy explanation of context. But anyway, even with the uncertainty, it looks like the Winkie Country plays an important part more often than the others, both in Baum’s books and the series in general. The Gillikin is almost certainly the one he used the least, but Ruth Plumly Thompson featured it much more often, aided partially by the fact that one of her most popular characters, Kabumpo, is established as living there in her second book. I suspect the Winkie Country has a boost due to three major characters living there by the time of Emerald City, and because events outside Oz tend to take place to the west. In Ozma, Baum placed Ev and the Nome Kingdom to the east of Oz, but after that they’re always mostly west (well, east in the books where the directions are mixed up, but that’s another story) and partially north. Thompson uses the Quadling Country less than others, and I don’t know of any particular reason why that should be. Even in her books that DO feature it, it tends to be explored much less than the others. In Grampa, Ragbad is central to the plot, but most of the story takes place in the Winkie Country. Speedy and Ozoplaning mostly occur outside Oz, with their events in the Quadling Country being fairly minor, and perhaps added in BECAUSE Thompson realized she wasn’t using the southern quadrant that much, although I have no proof of that. It does seem like Thompson tried to vary her settings from one book to another, rarely having two in a row that take place in the same part of Oz or primarily outside Oz itself. One exception to this is that there are visits to the Nome Kingdom in both Hungry Tiger and Gnome King. I’ll also note that Speedy, Wishing Horse, and Captain Salt all visit the Nonestic Ocean, although it’s only the main location in the latter, the only main series Oz book that takes place entirely outside Oz. Later authors didn’t really write enough to establish any particular pattern, although it’s interesting that neither of Jack Snow’s books has anything of note happen in Oz proper outside the Emerald City, unless you count Ozana‘s garden being magically relocated to the Quadling Country at the end of Magical Mimics. Shaggy Man takes place in the familiar locales of Ev and the Nonestic Ocean, but much of Mimics occurs in an area that had only been previously visited in Emerald City. I guess he’s somewhat balanced out by the McGraws, who, aside from the beginning of Merry Go Round that’s set in Oregon, never leave Oz in their books.