I noticed that one of the other monsters described in William Cox’s Fearsome Creatures of the Lumberwoods, the same book as the Squonk, is the Snoligoster. (WARNING: The passage is pretty racist.) That’s a name I thought I knew, but apparently there’s some debate on whether it’s the same as a Snallygaster. It’s likely that they have the same derivation, but the names are associated with different places and are described pretty differently. Of course, most creatures from folklore or tall tales can have vastly different descriptions. I’d actually first heard of the Snallygaster in a Flintstones book, one of those ones that came with a cassette that you could read along with. Fred and Barney belonged to the Society of Loyal Snallygasters (in addition to the Water Buffalo Lodge?), and when Wilma asked what one was, Fred, presumably making it up as he went along, describes it as a backwards-flying lion with a propeller nose that lived in old bowling alleys.

The more common description of the creature is that it’s part bird and part reptile, with a metallic beak and claws like steel hooks, and it makes a noise like a locomotive whistle. They’re known to carry off both chickens and human children, possibly sucking their blood.

It’s particularly associated with Frederick County, Maryland, and dates back to the eighteenth century. The name comes from the German “Schneller Geist,” or “fast ghost.” Other descriptions give it tentacles or a single eye, pretty standard ideas when making up something that looks creepy.

Picture by R.M. Hanson
Some accounts say that the main enemy of the Snallygaster is the Dewayo, a sort of wolf with human stature.

A 1909 newspaper hoax brought the Snallygaster back into public attention, and there’s a rumor that Theodore Roosevelt said he wanted to hunt one. Snallygaster was also the name of an ice cream soda in the 1960s, and it’s now a brand of blended whiskey.

The Snoligoster, while likely from the same derivation, is said to dwell in Lake Okeechobee, Florida. It looks like a giant crocodile, but with fur and no legs. It has a bone propeller on its tail in order to move quickly (that could be where the author of the Flintstones book got that feature) and a spike on its back that it uses to kill victims and store them until it’s ready to eat. 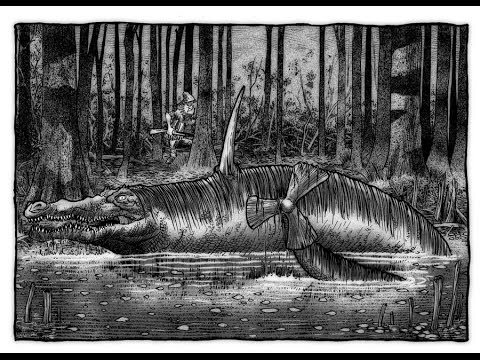 Picture by Richard Svennson
Oz fans will probably remember that L. Frank Baum also used the idea of a animal with a propeller tail for his Ork, although he flies and doesn’t like to get wet.