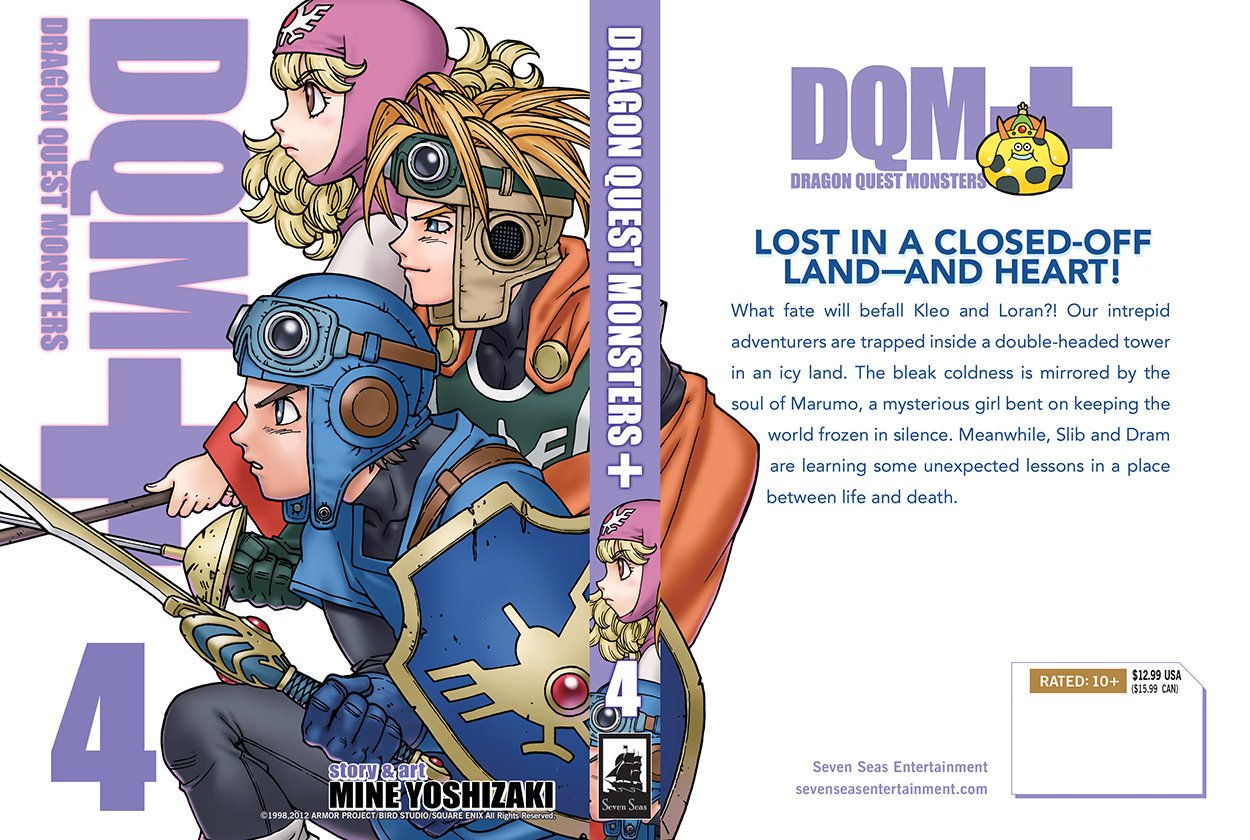 I’ve read Volume 4 of the Dragon Quest Monsters+ manga, which continues with the story of Marumo, Loran, and Pazuzu. Loran, the Prince of Lorasia and hero of Dragon Quest II, left home when the seeds of hate and fear that led to the rise of Malroth in the first place caused people to turn against him. Now, he’s back in Rendarak and once again fighting Pazuzu, who was revived through evil synthesis and absorbed the power of Malroth. The cold-hearted sage and former Monster Master Marumo is also living in Rendarak (I think?), and keeping the place frozen. I like how she calls Pazuzu “Mr. Monkey,” like she has no respect for him despite his power.

Kleo’s only monster companion at this point is the Mottle King Slime Mooki, as the Slime Slib and the Drake Slime Dram were killed in battle. They’re now in a place between life and death, where they are being taught by a Guardian of the Spirit World, a Healslime who became a human. There’s an odd bit where the Guardians claim that the human form is the apex of evolution, which every monster instinctively seeks to achieve, and that the most powerful monsters resemble humans.

Even though it’s fantasy, I can’t help but get a little annoyed at the idea that evolution operates toward an ultimate goal, since that’s a misunderstanding that Creationists use to discredit scientific evolution. But then, this is a world (really multiple worlds) where we know that gods exist. The idea of humans turning into monsters and vice versa is one that appears throughout the DQ series, but DQ4 is the first one to make evolution a plot point. When the alchemist Mahabala inadvertently rediscovers the Secret of Evolution, his apprentice Balzack, the Marquis de Leon, and Psaro all end up using it to take on more powerful monstrous forms.

Seems kind of strange if humans are more powerful than monsters, or the height of evolution. There’s also the character of Healie, a Healslime who hangs around humans in hopes of becoming one.

He eventually does, although we never find out how. In DQ5, Precaria, a town in the underworld of Nadiria, is inhabited by monsters who have become human with help from Madalena, the hero’s mother. It’s presented as a moral and spiritual change that leads to a physical one. Grandmaster Nimzo, the main villain, was originally a human who turned into a monster, then used the Secret of Evolution to obtain a more powerful form.

He and other Demon Lords, like the Dragonlord and Orgodemir, can take human or humanoid shape, but it’s suggested that the more demonic form is their true one. And dragons in particular taking human form isn’t all that uncommon in the series.

The manga actually states that no one is sure whether Hargon was a human or a monster.

Humans do manage to kill all these demons, at least temporarily, but usually only with the aid of magic. And there are certainly monsters in the games who look mostly human but aren’t that powerful. It’s not always that easy to draw the line, which I guess is why the first case we see of a monster becoming human is one whose original form is more like a jellyfish. Really, monsters in the series are such a strange assortment that I’m not sure we can generalize that much about them. Some are purposely malicious, some just wild, and some get along just fine with humans.