Hello, Chloe, What Do You Knowy? 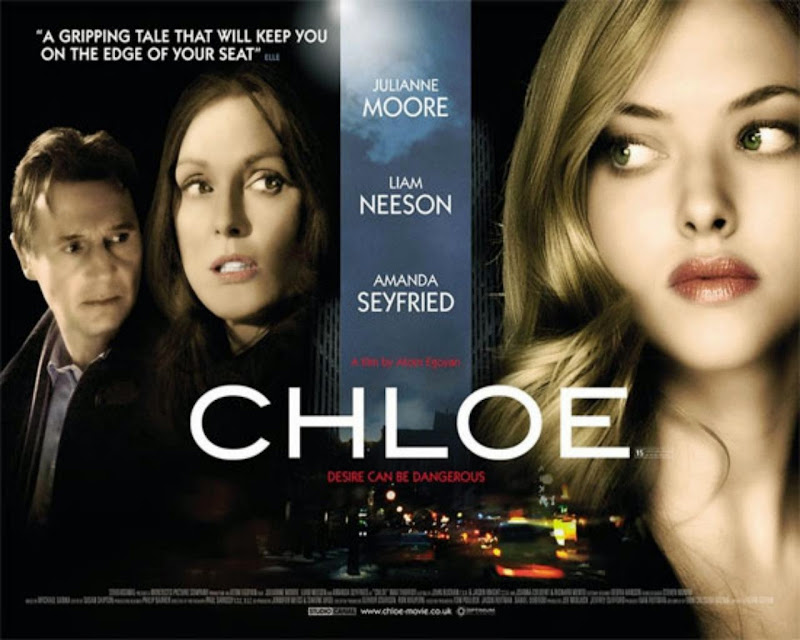 Chloe – SPOILERS! I put this on the Netflix queue years ago, and I’m not sure I remember why. I think it was mostly just that I was interested in Amanda Seyfried, and someone told me this was a good movie with her in it. Julianne Moore plays a gynecologist who’s afraid her flirtatious music professor husband, played by Liam Neeson, is cheating on her. When she runs into Chloe, a prostitute played by Seyfried, in a restaurant bathroom, she hires her to test her husband’s fidelity. Chloe goes on to tell elaborate stories of her sexual experiences with Neeson, and for some reason this makes Moore feel closer to both him and to Chloe, and the two women have sex. Eventually, Moore realizes that Chloe made up the stuff about her husband, and has developed feelings for her. When Moore turns her down, she goes kind of nuts, seducing and sleeping with her son, and then kills herself. I guess if it were just a story about a hooker getting a couple to reconcile, it wouldn’t be a thriller, but I kind of feel Chloe being a crazy stalker didn’t really work, when she seemed in control for most of the movie. Beth suggested that the film was kind of against women, as one of the main female characters was so paranoid as to launch a sting operation on her own husband, and the other a sex worker who turned out to have mental issues. Maybe I wouldn’t have even thought of that if I’d seen the movie when it was new; I’ve seen a lot of stuff online recently about how poorly sex workers are treated. I understand it was based on an earlier French film, so maybe that’s to blame. A weird bit of trivia is that Neeson played Jean Valjean and Seyfried Cosette, but in two different Les Miserables movies.