I’m continuing with the Disney Masters series as available on Comixology, and I don’t have too much to say about the third and fourth volumes. Some good stories, but it’s more fun to write about the really crazy ones, and there were some in Volumes 4 and 5. 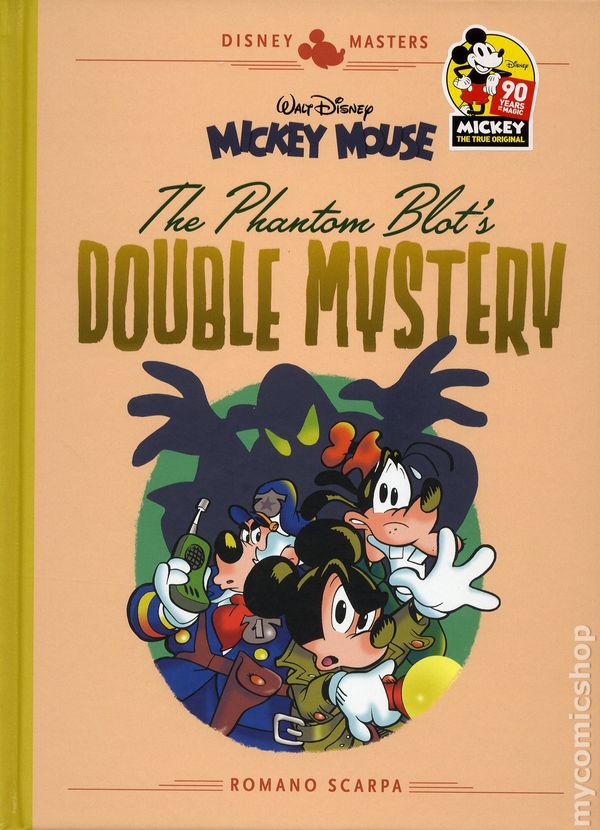 Mickey Mouse: The Phantom Blot’s Double Mystery, by Romano Scarpa – The main story here has the Phantom Blot, who’s known for his convoluted schemes, trying to frame Mickey. I get the impression that Scarpa is also known for convoluted plots, but he didn’t write this one; that was Guido Martina. The tale involves hypnotism, various stolen items, a night in a spooky castle, and invisibility. While there are explanations for much of what the Blot does, it still seems somewhat random in many respects, with a lot of false leads. And it isn’t Mickey’s sleuthing but Eega Beeva’s supernatural powers that are the key to cracking the case. The Mad Hatter makes a cameo appearance, as mad as ever, and here he has the name Thomas Topper.

One amusing page has Goofy whittling while waiting in Police Chief O’Hara’s office for a message from the Blot, and the room increasingly fills with wood shavings.

Another story, “The Eternal Flame of Kalhoa,” teams Mickey with two well-meaning but bumbling sailors, who have stumbled across an island with an eternal flame that the Mouse had read about in a book of legends. There’s a lot of slapstick with the sailors, including their trying to signal with semaphore flags while driving a car. The story gets going when the three of them set sail for the island, with a sea captain who’s heard their story following them, but having to help them out of all kinds of trouble along the way due to their general incompetence. Uncle Scrooge: King of the Golden River, by Giovan Battista Carpi – Another Italian artist draws these stories, with Martina as the writer on two of them. The title story, not to be confused with the Carl Barks comic with a similar name, begins with Huey, Dewey, and Louie trying to build their own satellite, but instead accidentally freeing Donald’s ancestor Dondorado, who was imprisoned as punishment for his greed and selfishness. Kind of strange that they’d introduce such a character when Barks had already used the actual El Dorado, but whatever. Donald, Scrooge, and the nephews travel to South America to find Dondorado’s lost treasure, which can only be uncovered through acts of selflessness. The general theme is that Donald and Scrooge only want the treasure for themselves, while the nephews’ desire to share it makes them successful in finding it, and this is reinforced over and over again, to the point of making the adults thoroughly unlikeable. And it’s not like they learn anything, either.

What’s strange is how many elements are basically extraneous to the plot. It gets off to a few false starts, first appearing to have something to do with space travel, then with Donald entering a contest to win a vacation. Donald gets anti-gravity pills from Gyro Gearloose early on, but they don’t come into play until much later, for an escape and then for a gag. It really seems like they would have been more significant to the plot. And the story goes on after the Ducks get back home, but with no further plot developments of any significance. Another comic stars Mickey and Goofy’s identical ancestors, Mickey the Kid and Six-Shot Goofy, on the trail of bandits in the Old West.

Scrooge makes a brief appearance in this tale as well, tying in with his time in the West before he’d made his fortune. The final story, “Me, Myself–and Why?”, is a strange one, with Scrooge claiming he’s three different people so he’ll be in a lower tax bracket, which works, but then he thinks he actually is all three and starts losing business to himself. Does this make any sense? Not particularly, but it’s kind of funny how lazy Scrooge’s alternate personalities are. The writer on this one is Rodolfo Cimino.