If Wishes Were Streetcars

The Wish Express, by Ruth Plumly Thompson – This could essentially be considered the author’s first book, although it wasn’t published in that form during her lifetime. Before she took over the Oz series from L. Frank Baum, she serialized this tale as Marvelous Travels on a Wish in her children’s page in the Philadelphia Public Ledger in 1916, and it was later published in abridged form in her Wonder Book in 1929. The protagonist is a boy named Berens (is that a name people actually had?), who wishes to be someone else when he’s bored and having trouble with his division homework. This takes him and his dog Rags (who gains the ability to talk during the adventure) to the Wish, a sort of flying trolley bound for Somewhere Else, where everyone’s wishes would be granted. An assortment of other passengers have their own desires: a girl named Sarah Ann who wants to be named Florabelle Elizabeth and no longer have freckles, a poet who wants to be famous, an old lady who wants to be young again, an elephant who wants to discover something new, a donkey who wants to be a Bull Moose, a horse who wants to ride in a carriage instead of pulling one, a serving maid who wants to be a lady, a farmer’s boy who wants to be a millionaire, and a man who wants to be king. The Wish is driven by the Dissatisfied Bug, and conducted by a monstrous creature called N.V.

Not surprisingly, puns and metaphors are in heavy supply, with a lot of the dialogue being rather vaudevillian. The streetcar part seems to take a lot of influence from when Alice is on the train in Through the Looking-Glass. Before reaching their destination, the Wish stops in Talktown, where people talk constantly but never do anything; and the State of Discontentment, where everyone is sad, angry, and pessimistic. There’s some similarity to the many unpleasant pun-filled places in Thompson’s Oz books, although here they come across as much more moralistic, the heavy-handed sort that Baum claimed to want to avoid. When everyone reaches Somewhere Else, they realize that their wishes haven’t made them any happier, although it does seem to have been set up specifically so circumstances would work against them. I guess it’s kind of like a precursor to Fantasy Island, not that I’ve ever watched that show. (Why would you trust Khan to fulfill your wishes, anyway?) When Berens takes the place of Some One Else, his parents come across as abusive, although I’m not sure whether that was Thompson’s intent. They yell at him, ignore him during dinner because they think he’s lied about where he’s been, and beat him for stealing jam. It’s supposed to be an unpleasant experience, and Thompson simply says of the beating, “It makes me feel very bad, so I’ll just tell you there was a cane in it and let it go at that.” But it’s not entirely clear whether the issue is that Berens’ parents dole out such harsh punishments, or just that he’s being punished for things he didn’t do (as the real Some One Else did them). The 2007 Hungry Tiger Press edition includes the illustrations by Hammon, and an interesting gimmick with a trolley car that advances along the tops of the pages as the book progresses.

The elephant and donkey are particularly interesting because of their relation to the Republican and Democratic Parties.

These animal symbols were popularized by Thomas Nast, who is also at least partially responsible for the modern conceptions of Santa Claus and Jack Frost. 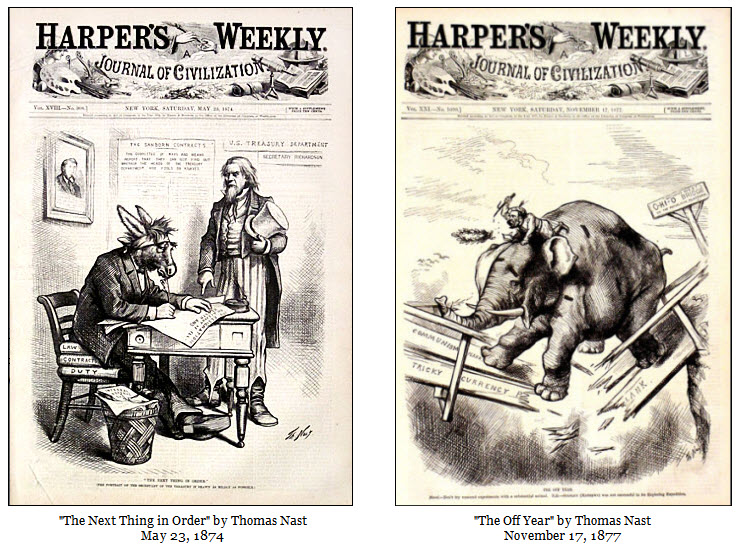 In the story, as Ruth Berman indicates in her Wonder Book introduction, the elephant indicates that going Somewhere Else is “the thing to do since he’s (waving his trunk in the donkey’s direction) been running things,” referencing Woodrow Wilson winning the 1912 election. One possibility for a new thing to discover that the elephant mentions is “a platform.” The donkey cheers on a guy in Talktown repeatedly yelling “Peace!”, while the elephant says it’s nonsense, possibly relating to Wilson’s policy of keeping the United States out of World War I, while 1916 Republican candidate Charles Evan Hughes criticized him for being unprepared for conflict. I don’t know that it really goes much deeper than that, though. It’s the donkey who wants to be a Bull Moose, even though that party was started by Republican Theodore Roosevelt. I believe Thompson herself was a Republican (as was Baum), but both characters are played for laughs and, while they quarrel, seem to be friendly most of the time. And Thompson obviously liked using elephants in children’s stories anyway.

This also wasn’t the last time Thompson wrote of Somewhere as a physical location, as one appears in The Enchanted Island of Oz as well. Somewhere Else is a place that looks beautiful and exciting but is not really what it seems. The King and Queen are called Illusion and Delusion, and their Prime Minister is Something Else Jus Tas Bad. When Berens walks down the street, all the more interesting or enticing buildings are on the other side. Joe Bongiorno has suggested that the two Somewheres could be the same place, which would presumably mean Queen Else had taken over from the two unpleasant monarchs. Maybe that was due to Ozma’s interference. Somewhere Else actually bears some resemblance to the Emerald City in The Wonderful Wizard of Oz. An American child and her dog go to a mystical place where they hope to have their dreams come true, only to find that it’s a city of scams and illusions. But then, the Emerald City is still an impressive place, and Dorothy’s companions are happy enough with the symbols the Wizard of Oz gives them, so the tone isn’t as dark despite the common themes. As Somewhere in Enchanted Island is in the Gillikin Country, that also raises the question of where the other places mentioned in the story are. After leaving the State of Discontentment, the Wish crosses Dreamland, which could be the same as the Kingdom of Dreams on the map of the countries surrounding Oz, in which case the State and Talktown would likely be outside Oz as well. There are also brief mentions of the Duke of Fuddle Duddle, a war in Euphasia, and the place the elephant discovered. Assuming these are real instead of illusory places (the latter of which would fit the theme of the story but wouldn’t be as much fun in terms of world-building), those could also be in or around Oz. I briefly used the Wish and its driver and conductor in a Christmas story I wrote but haven’t yet shared with the public. Hopefully I’ll be able to work on revising it in December or so; I can’t say I’m really in the mood the rest of the year.