Life with the Luminary

I’ve finally started playing Dragon Quest XI for the Nintendo Switch. Since it’s Dragon Quest, there’s a lot that’s familiar, but there are also some changes to the mechanics that I think might make things a little easier. Battles are still turn-based, but instead of choosing everyone’s actions before the round, you do so when a party member’s turn comes up, which can prevent stuff like trying to heal someone who dies before the healer can perform the action. There are campfires out in the wild where you can sleep and save the game, instead of having to go back to town every time; and you can return to these with the Zoom spell. You can often speed up travel in the wild by riding a horse, which will even gallop over enemies, although you don’t get any experience that way. I’ve always kind of wondered why games with steeds or vehicles DON’T let you run them over the monsters, but here you can. And the people who give you information on what you have to do next and those who have mini-quests for you are indicated on the map. You can also do a preemptive strike, sort of like in Mario RPGs, when you’re on foot, although it sometimes seems a bit unfair when the monsters are just hanging around being cute. 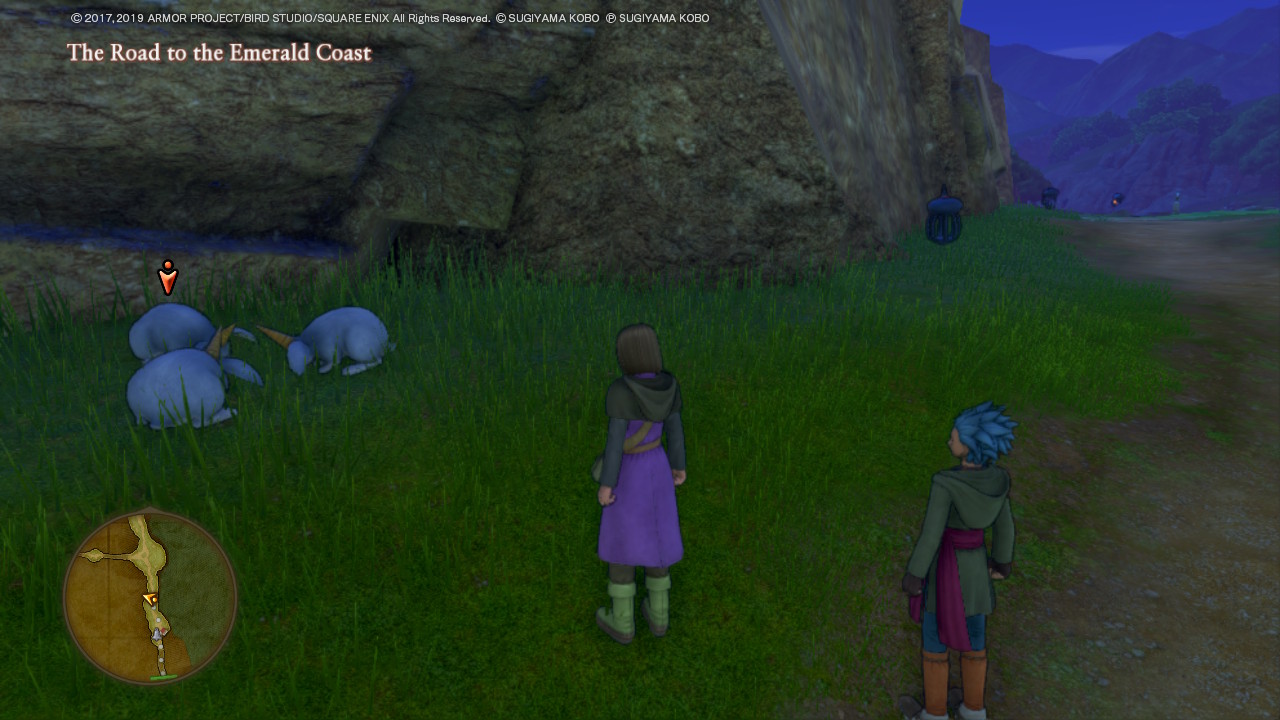 You need the experience to grow in power and face actual threats, though! The 3D environment is taking some getting used to, as the most recent RPGs I’ve played had top-down views. There actually is a way to play it in 2D, but I haven’t tried that yet. While exploring, your party can jump and sometimes climb on roofs. The graphics have a lot more detail than I’m used to with this series.

The story starts with a baby being set afloat on the river, Moses-style, who is then adopted by someone in a rural village called Cobblestone. You start playing as this character, fulfilling his coming-of-age ritual with his best friend Gemma, in what’s essentially a tutorial. The hero learns that he’s the reincarnation of someone called the Luminary, which was a particular job you could learn in earlier games, but here is a specific title. You go to see the King of Heliodor, but instead of being somewhat helpful like other monarchs in the franchise, he sees the coming of the Luminary as a sign of evil and throws him in the dungeon, also destroying his hometown. What a jerk! 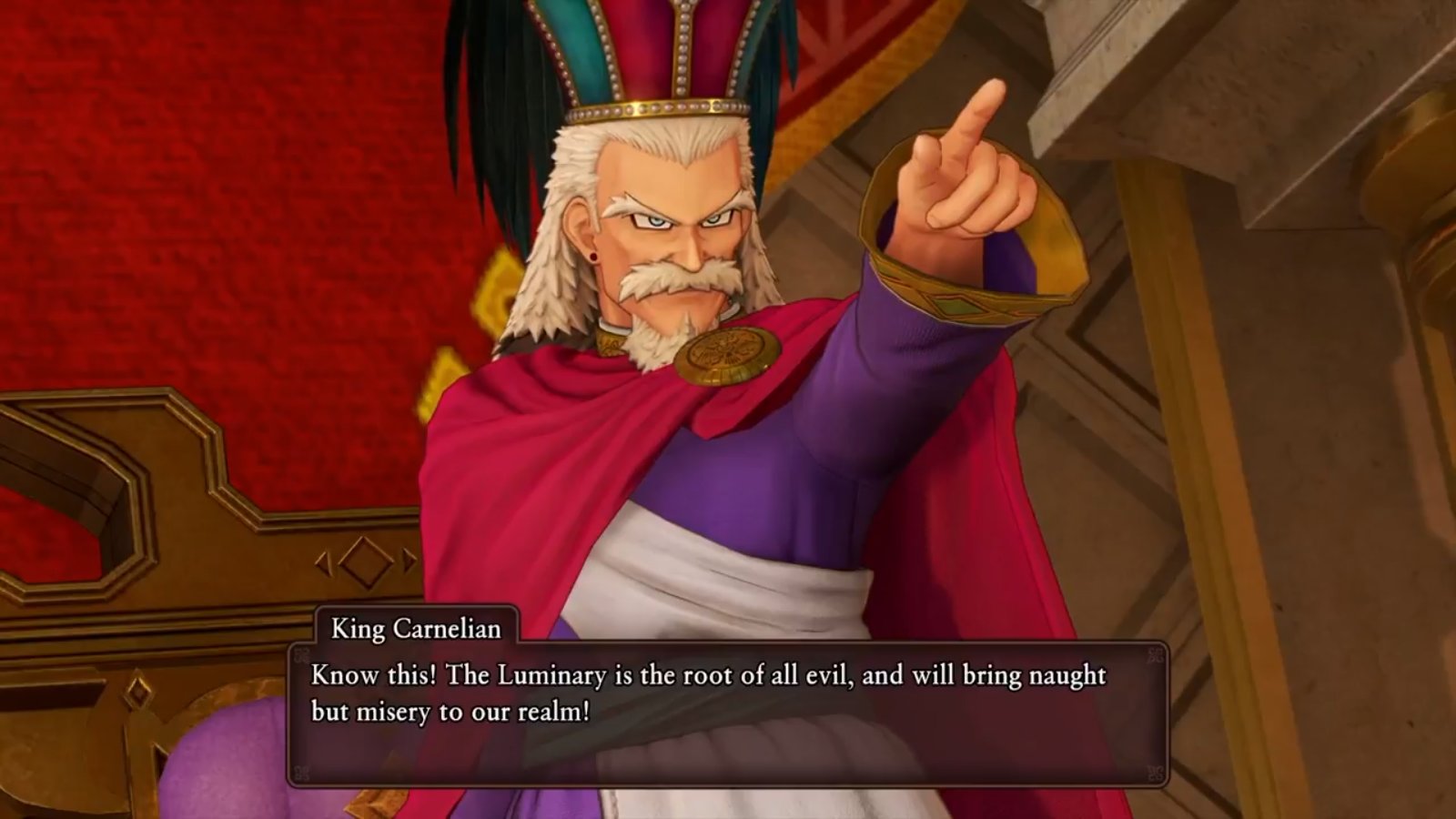 I think that’s money, Your Majesty.
You escape with the help of a thief named Erik, who’s a much stronger character than you might expect from someone of that vocation. I read that his name in Japanese was Camus, but the translators changed it because he was supposed to seem Scandinavian. If that’s the case, though, why does the voice actor give him an English accent? Eventually, the two of you reach a travel door to Hotto, a country with a volcano where forging is the main occupation and the natives speak in haiku. Here, you meet with Veronica, a mage from Arboria who was somehow made younger; and her twin sister Serena (although of course they now don’t look like twins), who specializes in healing magic and playing the harp.

Then, in the desert Sultanate of Gallopolis, a place obsessed with horse racing, you have to help out another cowardly, useless prince. This one does redeem himself somewhat, though. This is also where you meet another future party member, Sylando, a flamboyant circus performer with hidden talents. 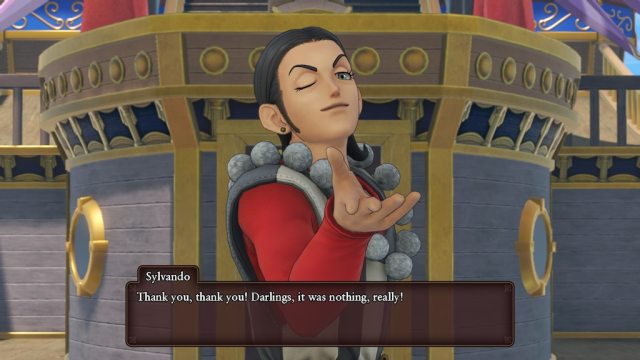 So far, every one of the characters has tagged along and participated in battles without player input before they joined for good, and Sylvando still hasn’t been controllable yet. Having non-player characters help out in battle is fairly common in the DQ games, but I can’t think of other instances where main party members start out that way. The Luminary has a special ability to touch parts of the World Tree Yggdrasil and learn back stories, which also usually give hints on how to proceed. 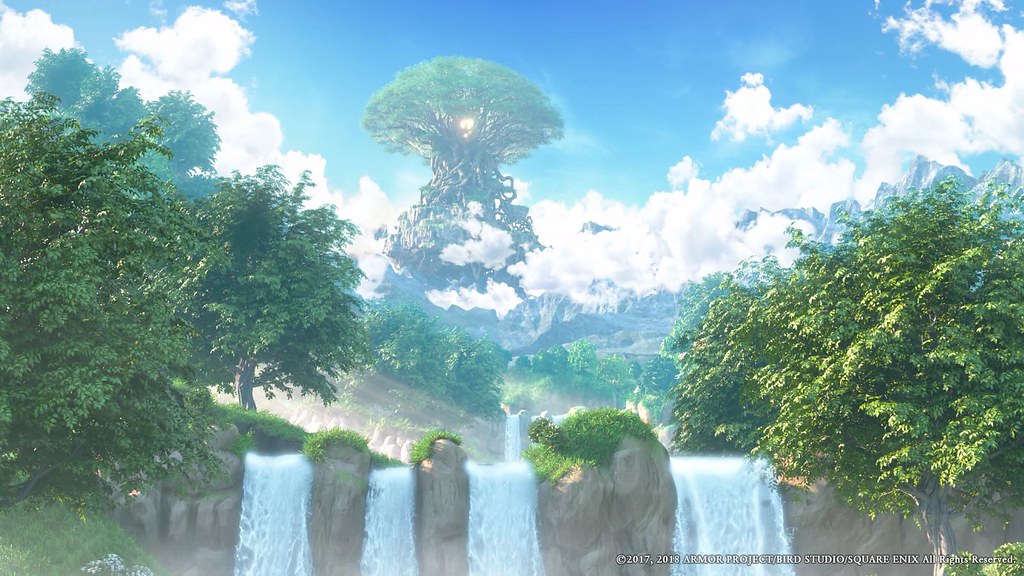 By the way, I’ve known of Yggdrasil for years from both Norse mythology and video games, but I think this might be the first time I’ve heard it said out loud. In the game, the emphasis is on the last syllable (ig-dra-SIL), but I don’t know whether that’s the usual pronunciation. It’s probably totally different in Old Norse, like how “Ragnarok” was apparently something like “rug-na-rook.” There’s also a bit of nostalgia in a place called Tickington, where you can travel to places from previous games to solve problems and help restore the flow of time.

It kind of reminds me of the bits with the fairies in DQV, although that didn’t have all the callbacks. So far, I’ve done the mini-quests in Galenholm from 1 and Moonahan (AKA Hamlin) from DQ2. What’s particularly interesting is that they use the mechanics from the earlier games as well. I am a little confused because the Tockles refer to these events as taking place in the past, but I’ve heard elsewhere that XI is a prequel to 3, and hence 1 and 2 as well. I guess I’ll avoid trying to riddle that one out until I’ve finished the game.

1 Response to Life with the Luminary