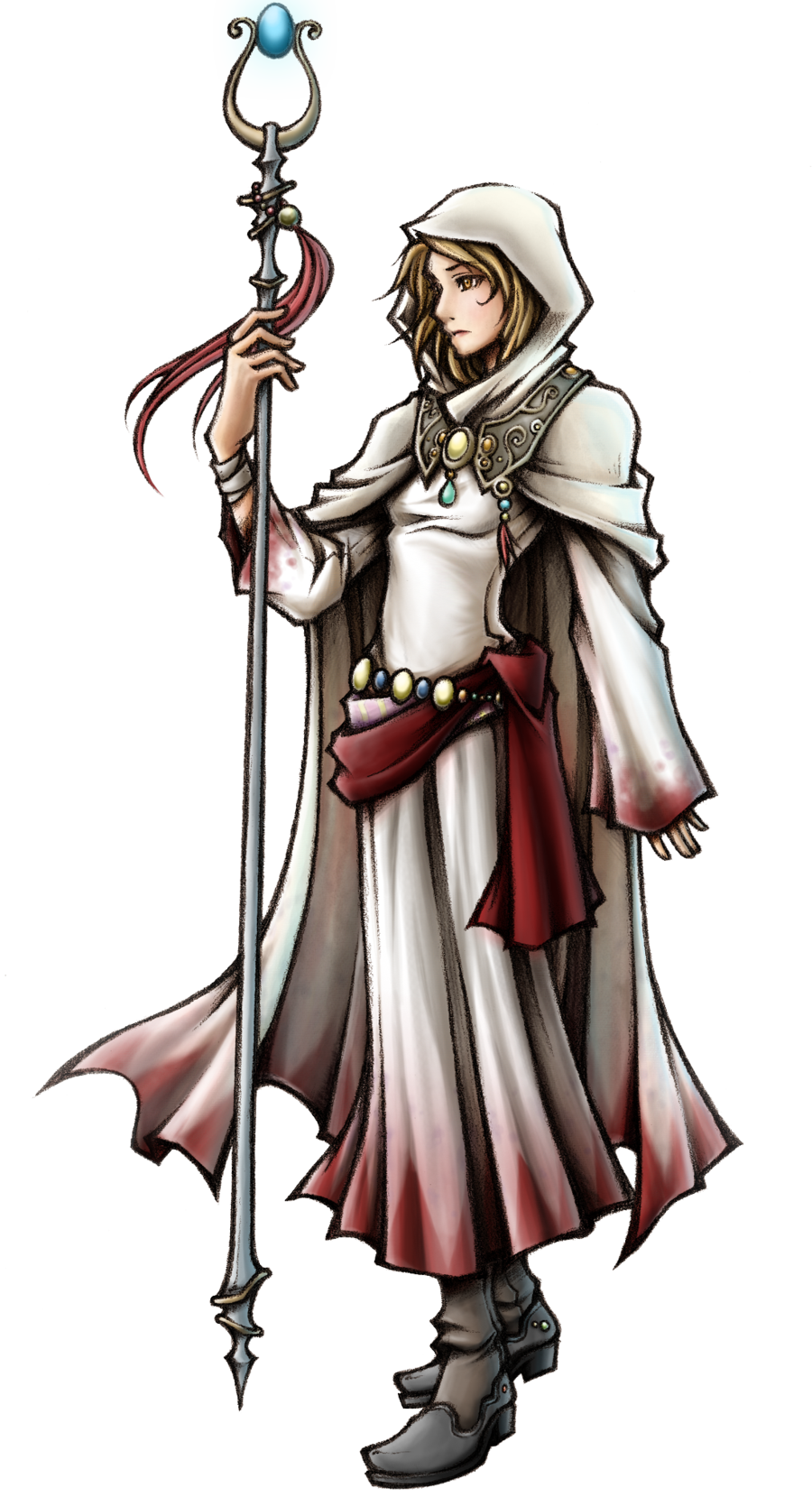 I get the impression that the general depiction of a white mage in the Final Fantasy series is female. I thought of this when I recently talked about Mario Hoops 3-on-3 and Mario Sports Mix, which have a generic white mage character who is clearly a woman. 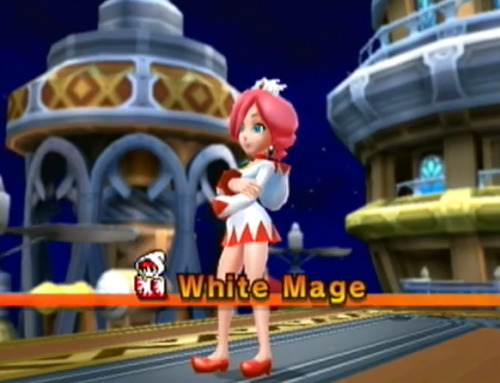 The thing is, the very first FF game strongly suggests the white mage is male, like all the other playable characters, as is made more apparent after class change.

FF2 has a white mage character named Minwu who travels with your party for a while (i.e., until he dies breaking the seal on the Ultima Tome), and is also male.

In FF4, however, there are two playable white mage characters, Rosa and Porom, both of whom are female. 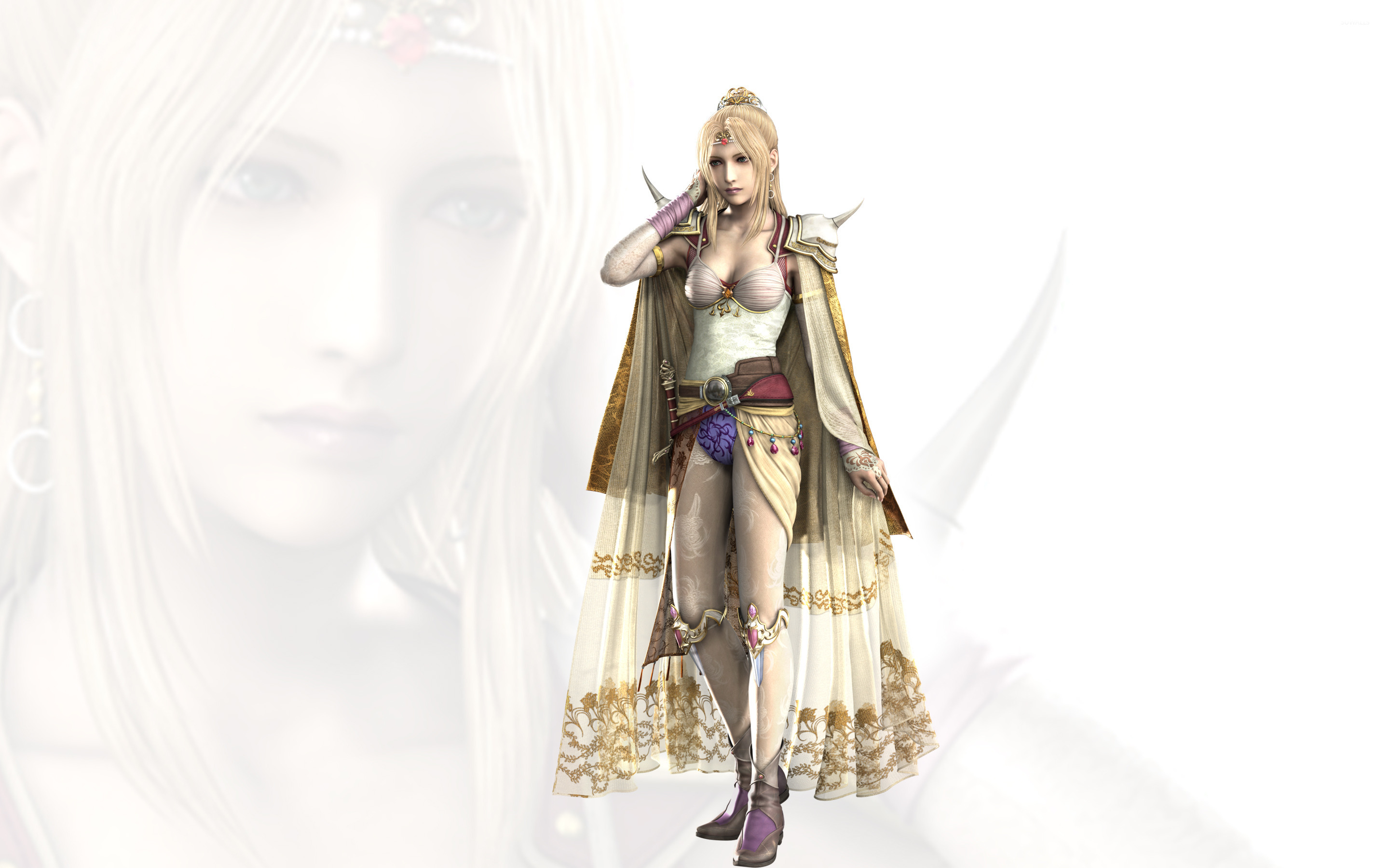 Aerith in 7 mostly uses healing and support magic; and the two main healers in 9 are Dagger and Eiko, although they’re also summoners. 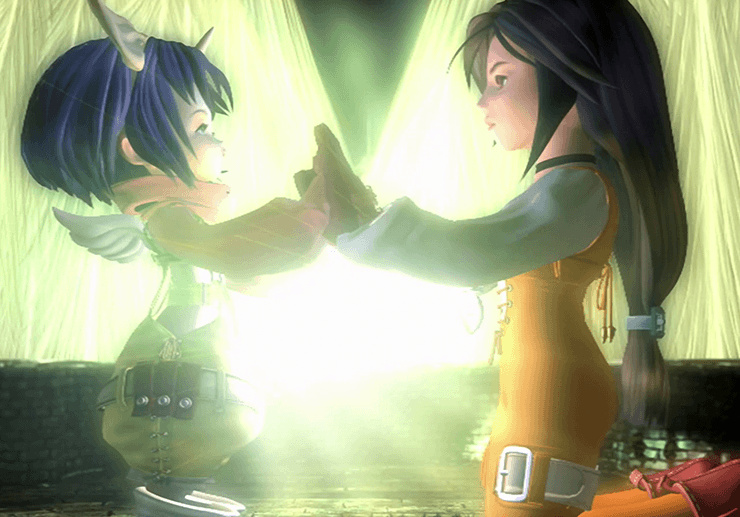 And in remakes of the first game, the white mage sprites look more feminine, so the designers apparently went along with the association. 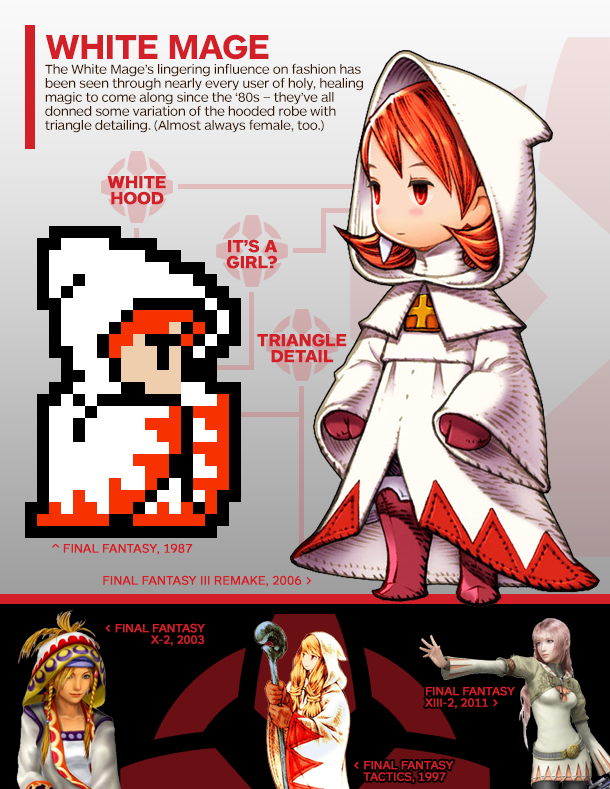 White Mage in 8-Bit Theater, which uses sprites from the original NES FF1, is female.

The issue with leveled-up the leveled-up White Wizard doesn’t arise in the comic, as White Mage never changes class and the White Wizard sprite is used for a minor character instead. I think there’s a somewhat sexist association between women and healing, part of the whole maternal, nurturing thing. In FF4, Porom has a twin brother who’s a black mage, and he’s willful and bratty while she’s dutiful.

It’s kind of a yin-yang thing, except in the original Chinese philosophy, it’s the male principle that’s light and the female that’s dark. In FF9, the Black Mages are artificial creations, but the self-aware ones all identify as male, from what I can recall. (I really need to try to finish that game at some point.) 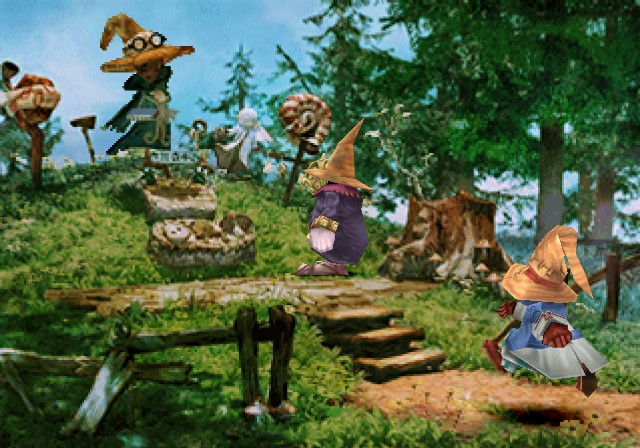 And yes, the resemblance of FF black mages to Orko from Masters of the Universe is something I’ve come across, but I don’t know that there’s any actual connection.

In the Dragon Quest series, it often seems to be men who are healers, probably because they’re identified as priests in a religion that bears obvious similarities to Catholicism. Kiryl in DQ4, Nevan in 6, and Angelo in 8 are priests who specialize in healing magic.

The closest equivalent of the black mage is class is the wizard, or simply mage. In both series, neither sort of mage has that much in the way of attack or defense stats, although the offensive magic users are considerably worse. This seems to be a role-playing tradition, I guess because the spells somewhat balance out the other weaknesses, but the fact that magic power is usually limited makes the black mage types rather less useful for grinding, but invaluable against bosses. While the FF connection between healers and religion isn’t quite as blatant (okay, I haven’t played FFX, which I know has a religious theme, but I don’t think it has classes), it’s still there, as they tend to have the Prayer ability and the Holy spell. DQ also gives priests some offensive spells, including instant death ones.

I guess it’s supposed to be okay if you use them to vanquish evil, but theirs presumably isn’t a religion that promotes forgiveness of enemies. Then again, Christianity DOES promote that, and there was still a lot of violence done supposedly in its service. It’s not like all DQ priests are good anyway. Hargon in DQ2 is an evil priest who summons a god of destruction, and there’s a lot of corruption in the church in 8. 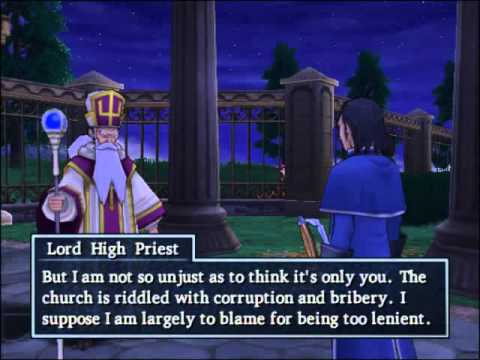 I don’t recall any association between black magic and religion, though.

Many games in both series don’t really stick to magical gender roles either. Some allow job changes, and both male and female characters can become white mages or priests as easily as they can anything else.

DQ4 has a male priest and wizard, but also a female fortune teller and dancer who can use healing/support and offensive magic respectively. 6 and 8 both have redheaded girls who use primarily offensive spells, and XI female twins who each focus on one sort. 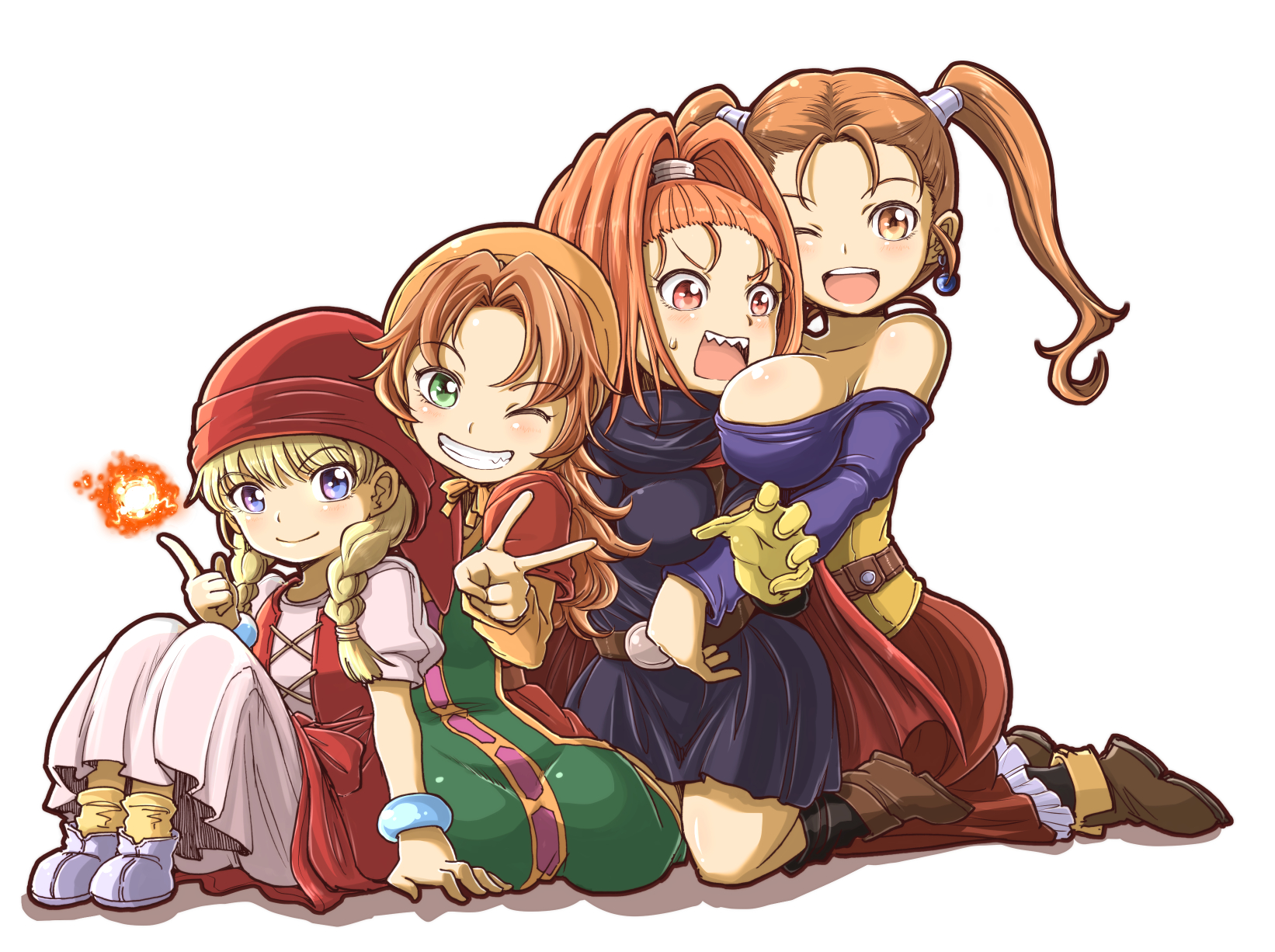 And while it does have the gendered white and black mages, FF4 also has Tellah and Fusoya, male sages who can use both black and white magic; and Rydia, who specializes in summoning magic but can use white and black as a child. For some reason, she loses the ability to cast white spells as an adult. And that’s not even getting into all the specialty magic.