This Life Is for Squirrels

Shakespeare for Squirrels, by Christopher Moore – The third of the author’s Shakespeare parodies, after Fool and The Serpent of Venice, takes on A Midsummer Night’s Dream. I’m interested in this play as it’s sort of a mythological crossover, mixing characters from Greek mythology with Western European fairy lore. The novel has Pocket, his apprentice Drool, and his monkey Jeff wash up near Athens, and meet up with the Rude Mechanicals and the fairies of the forest. The title comes in because the fairies turn into squirrels during the daytime. Puck has been shot to death, and Pocket finds himself investigating the death and running missions for Theseus and Hippolyta, and dealing with Titania and Oberon, the latter of whom rules goblins. There’s a bit of Hamlet as well, with Pocket and the Mechanicals using their play to try to uncover truths. Not surprisingly, Nick Bottom’s donkey head is used quite a bit for comedy. It’s a quite raunchy adventure (not out of place for Shakespeare), with a lot of amusing running gags, including fairies being bad with numbers. Honestly, I think it’s probably a bit weaker than its two predecessors, but still worth a read for any Moore fan. 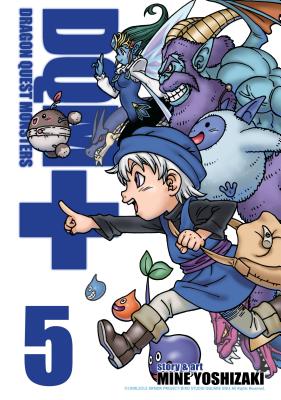 Dragon Quest Monsters+, Volume 5, by Mine Yoshizaki – The final volume of this series sees Kleo help Marumo come to her senses, while Loran’s two previous companions, the Prince of Cannock and Princess of Moonbrooke, help him to defeat the fused Pazuzu. When he’s defeated, Marumo has to help to destroy the remaining fused monsters, Atlas and Belial. These three are mini-bosses in Hargon’s castle in Dragon Quest II, and the manga describes them as having abilities beyond others of their kind, a good in-universe explanation for why they’re just pallet swaps of other enemies.

Kleo and the resurrected Slib and Dram battle a few of the other Monsters Masters who had previously appeared, and eventually returns home, with the promise of later adventures in the future. Kleo finds himself in one of his old books alongside the DQ1 hero, and for some reason the picture caption is in English spelled with Greek letters.

I wonder if it’s the same in the Japanese version. Honestly, the ending feels a bit abrupt, as there are so many characters and possible plot threads that were never developed. The volume ends with a story about Terry that I guess is an alternate universe sort of thing where he doesn’t make his turn into darkness. Terry’s sister Milly makes an appearance, and the appendix points out cameo appearances of Erdrick from DQ3 and the DQ5 protagonist, the latter of whom is training Villede of the Winged Folk.

The names given for the DQ2 companions are Satori for the Prince and Luna for the Princess. They’re definitely better names than Princeton and Princessa, as they were called in downloadable content for DQ9. Satori (basically Japanese for nirvana) is also the name for the Book of Sages, which had appeared earlier in the manga.