Why Won’t You Die?

It would become a thing in the Oz books that no one in that fairyland could die, but it wasn’t immediate. The Wonderful Wizard of Oz mentions the threat of death quite often, in fact. The first book to establish immortality there is Road, where Dorothy, upon seeing Jack Pumpkinhead’s graveyard for his old heads, says she thought no one died in Oz, to which the Tin Woodman replies, “Nor do they; although if one is bad, he may be condemned and killed by the good citizens.” So you can’t die, but you can be killed? It’s also a really casual mention of capital punishment by someone who’s supposed to be kind-hearted. I guess it goes along with the previous book when Nick Chopper was about to execute Eureka with his axe, and this was after serving as her defender at the trial. And Roadalso has a reference to the Crooked Magician having fallen off a precipice and died, which turns out not to be true as per Patchwork Girl. Emerald City expands on this idea: “No disease of any sort was ever known among the Ozites, and so no one ever died unless he met with an accident that prevented him from living. This happened very seldom, indeed.” Did something actually change in-universe regarding death within the first few books? Some fans have suggested that certain aspects of Lurline’s enchantment were suspended during the reign of the Wizard of Oz and were restored with Ozma. Or perhaps the instances of death in the earlier books could be retconned into something less permanent.

Tin Woodman claims “Accidents might happen to some, on rare occasions, it is true, and while no one could die naturally, as other people do, it was possible that one might be totally destroyed.” It’s a little unclear here what counts as a natural death, and whether being destroyed means you’re still technically alive or not. I always read it as Ozites being immortal but not indestructible. This book also explains that the Wicked Witches could die because they were practically dead before Oz became a fairyland, and only still alive due to their magical arts. 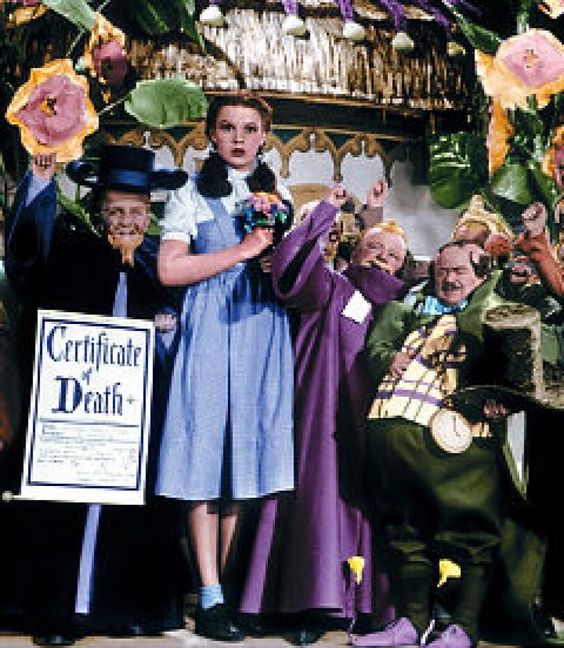 I would say being crushed and drying up or melted might also count as total destruction.

Glinda tells us: “The very fact that Dorothy lived in Oz, and had been made a Princess by her friend Ozma, prevented her from being killed or suffering any great bodily pain as long as she lived in that fairyland. She could not grow big, either, and would always remain the same little girl who had come to Oz, unless in some way she left that fairyland or was spirited away from it. But Dorothy was a mortal, nevertheless, and might possibly be destroyed, or hidden where none of her friends could ever find her. She could, for instance, be cut into pieces, and the pieces, while still alive and free from pain, could be widely scattered; or she might be buried deep underground, or ‘destroyed’ in other ways by evil magicians, were she not properly protected.” The indication elsewhere is that this can happen to natives of Oz as well, so perhaps the reference to her as “mortal” means as opposed to natural immortals like Ozma herself, rather than to normal people born in Oz. In Tik-Tok, Private Files tells his officers that, if they were ripped into pieces and swallowed, each piece would still be alive, only for Colonel Banjo to reply, “A hamburger steak is a hamburger steak, whether it is alive or not!” I assume being eaten would count as total destruction, but whether a digested person is still technically alive isn’t clear. It does presumably mean that, if someone is eaten without being torn apart first, they’re certainly alive while being eaten. Later on, Kaliko speaks of having a conversation with another Nome who’d been torn to pieces by a dragon, and was able to answer because his mouth was on the piece. Since Nomes are naturally immortal, the rules might be a little different for them, but this seems to follow the same basic rules we find with people from Oz. But what if, instead of being ripped into pieces, someone is burned to ashes or blown up, as Glegg is at the end of Kabumpo?

Before L. Frank Baum had introduced immortality into Oz, he had used it in the Land of Mo, which is also where he had trees growing unusual items prior to placing the lunchbox trees in Ev in Ozma. In The Magical Monarch of Mo, people can be torn apart and still function. The Purple Dragon tears off the King’s head and later puts it on a woodcutter’s body, which leads to identity confusion.

Prince Fiddlecumdoo is flattened in a giant’s laundry press, and has to be inflated, after which he eats a lot to bring his internal organs back into shape.

And Prince Jollikin, when his body is cut apart by the Gigaboo, places his head on his legs in order to find his other body parts.

Interestingly, the Gigaboo itself does die, Baum explains that “wild and ferocious beasts may be killed in Mo as well as in other parts of the world.” It sounds like a judgment call to determine which beasts count as wild and ferocious, though. There’s a later mention of a fish dying, or at least “expiring,” but foxes are able to remove their children’s necks and turn them inside out with no lasting harm to them. Ozites might be a little more difficult to restore, as Tin Woodman mentions a magic glue that can reattach body parts, which presumably wouldn’t be necessary if people could reattach them on their own.

There’s also the question of whether severed heads being able to go on living means Ozites don’t really need to breathe, which I find unlikely. To give one possible counterexample I thought of, Dorothy and Sir Hokus have trouble breathing after falling into a river in Royal Book. For that matter, would the ability of the Skeezers‘ city to sink have been that much of a defense if everyone could breathe just fine underwater? Is there a period of adjustment before a disembodied head starts showing signs of life? In Ojo, Realbad cuts the head off a Snoctorotomus, which temporarily puts it out of commission, but Snufferbux thinks that it might come back to life, with Ruth Plumly Thompson confirming that “no person or creature in Oz can be permanently destroyed,” and that “the Snoctorotomus would still be as lively and as dangerous as ever,” not specifying whether the head and body would be operating separately. And in Cowardly Lion, Tazzywaller cuts a lion in half with his scimitar to protect himself, and the front half runs away, leaving both halves “quite unhurt and lively.”

The front half later shows up and claims he’s missing half his heart, yet there was no mention of the lion bleeding, perhaps just to make it less disturbing for child readers. I’ve generally figured that people and animals in Oz can still get seriously injured, and perhaps the fact that they can’t die could prolong agony. People certainly still feel hunger pangs even though they presumably can’t die of starvation. But sometimes the authors make it seem like Ozites have heightened pain resistance and healing abilities, although it’s never really explained. If we take Thompson’s descriptions of both the Snoctorotomus and the Combinoceros in Purple Prince being likely to recover after what would normally be mortal injuries back to the original Wizard, we could possibly apply them to the wildcat and wolves Nick beheads and the crows whose necks the Scarecrow snaps.

Philip Lewin’s Master Crafters has the Kalidahs who fell into the gulf in the forest reappearing, alive but severely disfigured.

And we do know that magic can sometimes heal injuries that would be fatal in a mortal country, as with the glue. In Eric Shanower’s Giant Garden, Imogene and Magda are flattened into a lifeless state that the Wizard determines only the gas of the extinct velp vine can cure, although the cow’s Milk of Human Kindness turns out to work as well. And in March Laumer’s Good Witch, there are a few cases of a destroyed person’s consciousness being transferred to a nearby object. I think there’s a lot we don’t know about this issue, and some of it could be quite disturbing.

3 Responses to Why Won’t You Die?