Falling for the Fairy Fellowship

I’ve mentioned the fairyland on the other side of the world from Oz a few times, but since I’m planning on writing some fiction that takes place there, I might as well detail what we know about it. It first appears in Tik-Tok of Oz, when the Nome King tricks the protagonists into falling down a tube through the world, ending in the mysterious fairyland.

L. Frank Baum writes that it is “a lovely place, indeed,” and Queen Erma confirms that it “in beauty almost equals the Fairyland of Oz, and in power quite surpasses it.” We’re not given much physical description of it beyond “vistas of trees and shrubbery,” and that’s really only the view from Tubekins’ garden. The fairies living there are mostly kings or queens or servants of these monarchs, so the only Private Citizen, more famously known as the Great Jinjin Tititi-Hoochoo, is their ruler. It’s described as “one of the chief residences of fairies who minister to the needs of mankind.” Tubekins is the King of the Tube and its surrounding gardens, and the other monarchs we meet are the Queen of Light and the King of Animals. They’re described as largely identical in appearance, with beautiful but inexpressive faces, large blue eyes, curly black hair, and arms and legs of various colors. Betsy Bobbin is unable to tell if the colors are natural or the result of dyes. The fairies wear scarlet robes with embroidered dragons on them, and open sandals on their feet. They also spend a lot of time invisible, however. Despite this, John R. Neill doesn’t draw Erma fitting that description at all, and the text indicates that she does use facial expressions to convey her mood.

Her handmaidens also have different hair colors and clothes, but maybe the general fashion only applies to the kings and queens.

The land is also home to the Original Dragon, its first inhabitant, and many of his descendants, who are held in great respect there. The Tube was built by a magician named Hiergargo, who slid out and hit a star after the first time he tried it, and Tititi-Hoochoo says he was “properly punished for his folly,” with no further details.

Baum never returned to this land, nor did any of the other official authors. Later writers who did visit there were Phyllis Ann Karr, Onyx Madden, Melody Grandy, and Paul Dana. Madden’s Mysterious Chronicles calls the country the Empire of the Fairy Fellowship, even though it’s not ruled by an emperor. He refers to it as a meso terra-lunar realm, probably a reference to Plato and Aristotle‘s cosmology, in which the Earth is the center of the universe and the other planets (including the Sun and Moon) have their own spheres surrounding it. The sublunar realm is that within the sphere of the Moon, and is a place of constantly changing nature, while the outer spheres are unchanging. Followers of this cosmology also sometimes mentioned heavens and supernatural beings in the sublunar area, between the Earth and the Moon. These areas would presumably be the meso terra-lunar realms. This sort of cosmology was also used by Gilbert Sprague in his Emerald City Mirror serial about the Empyrean Plane. Madden also reports that the Tube is a sort of black hole, Tubekins’ garden contains flowers that produce musical tones and sacred sunflowers guarded by bumblebees, and dragons are descended from “the so-called dinosaurs who disappeared many millions of years before even the first of the fairies appeared.” This last point seems unlikely, as Quox says that the Original Dragon has been around since the beginning of the world, and Baum elsewhere says the same of fairies. 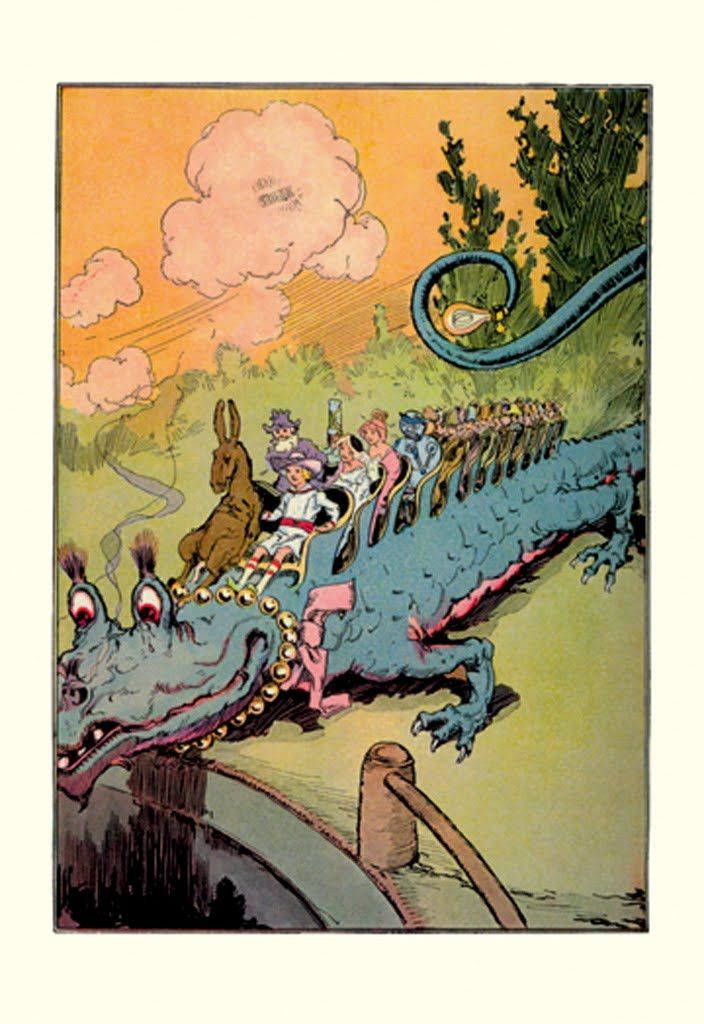 But then, the natural history of Baum’s rather loose mythology isn’t entirely clear. Baum was writing at a time when radiometric dating was just being developed, and there were many different estimates for the age of the Earth. The Life and Adventures of Santa Claus refers to the world being young at a time when not only did humans exist, but so so did Christmas, and I assume the Flintstones celebrating that holiday doesn’t relate to Baum’s universe. In the same book, Ak says that the world was made for humans, which suggests either a young Earth or humans being around way longer than science indicates. Otherwise, wouldn’t the fairies have gotten really bored hanging around with single-celled organisms, just waiting for people to show up? And the Dragonettes claim that their pedigree “extends back about twenty thousand years, to the time of the famous Green Dragon of Atlantis, who lived in a time when humans had not yet been created.” And we still don’t know the meaning of “the Year of the World 19625478,” when Hiergargo built the Tube.

Paul Dana’s books give more information on the history of the Empire of the Fairy Fellowship, which he calls An. According to this, Lurline is Tititi-Hoochoo’s sister, but the two parted ways due to disagreements, and a schism between the fairies resulted.

Part of this was because of Lurline’s decision to use the eggs of the Phoenix of An to enchant various lands, including Oz, Ev, and Mo. This actually fits in with Madden’s ideas, as he makes the country home not only to the Original Dragon, but also the Original Unicorn, Phoenix, and Tortoise. The Dragon, Skanderbeg (who shares that name with an Albanian nobleman who rebelled against the Ottoman Empire), is Lord of All Creatures, the Unicorn of beasts, the Phoenix of birds, and the Tortoise of reptiles. This combination of animals is a reference to the Four Guardians from Chinese astrology, constellations that are associated with the four cardinal directions. From what I’ve seen, the tiger was traditionally the representative of beasts; but it was sometimes the kirin, an animal with similarities to the unicorn, instead. Much the same is true of the phoenix, as that’s actually Greek, but came to be associated with a similar bird in Chinese mythology. The Unicorn is given a Greek name, Monokeros.

The Phoenix lives in the north of An on top of Mount Phoenix, the tallest peak in a mountain range. The bird has two heads, one of which sees the past and the other the future.

Karr’s Gardener’s Boy introduces Flora, the Queen of Gardens, whose home is near the border with the Land of Sour Notes, marked by a fence. She claims that the reason An is so isolated is that they don’t want humans showing up there to seek their favors, the only ways to get there outside being over the fence from the Land of Sour Notes, through the Tube, or down the Great Gulf surrounding Jinxland. I would suspect the fairies themselves have other means of travel in and out, though. Flora also indicates that the scarlet robes and multi-colored arms and legs are the fashion in the capital, and not everyone in the land conforms to it. In Grandy’s Zim Greenleaf, when Zim gives the Great Jinjin a heart, he’s given materials by Flora and the hitherto unmentioned King of Forests, almost certainly not the same as the Master Woodsman of the World.

It’s interesting to me that nobody, including Baum himself, ever tried to identify most of the fairy monarchs who dwell in the land; and the ones we do meet seem a bit redundant. And while light, animals, and forests are definitely useful to mankind, they were also part of nature well before humans. I suppose gardens are sort of a specifically human thing, however, even though the plants themselves aren’t.

1 Response to Falling for the Fairy Fellowship