Halloween is over now, but there are still a few horror movies I wanted to talk about.

Witchboard – A movie based on summoning spirits with a Ouija board, although there were some legal issues with using the brand name in the title, even though they did many times in the film itself. There are two different Ouija boards in the movie, but no witches. The back story is that a guy is dating his best friend’s ex, causing the two of them to become estranged. The girlfriend invites the ex-friend to a party, and he brings out a Ouija board and shows how he uses it to contact a little boy who died. This guy is incredibly pretentious, right down to his voice. But anyway, the girlfriend borrows the board and tries to contact the child’s spirit, only to accidentally make contact with a serial killer instead. People surrounding James start dying in mysterious ways, and the police suspect him. He has to team up with the pretentious guy and find out what’s going on, making peace with him in the process. And for some reason, it takes the guy’s death for him to be able to express love. Rose Marie has a brief appearance as the landlady. If you want to see people fall out of windows and get hit with hatchets, this is the movie for you! 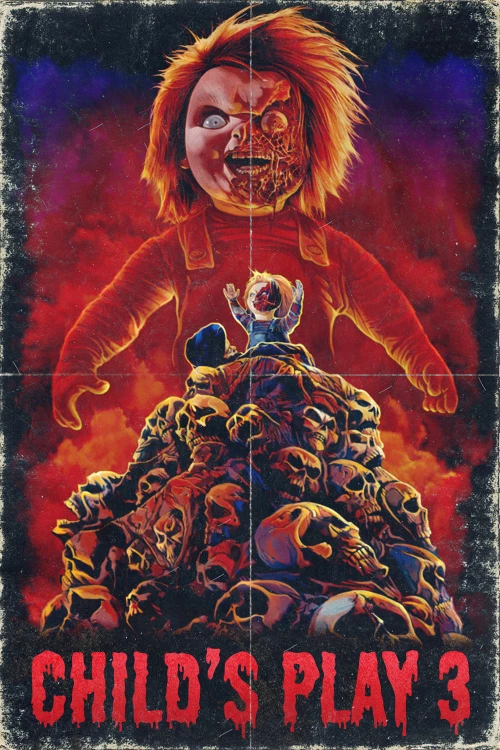 Child’s Play 3 – In a weird time skip, this movie released a year after Child’s Play 2 takes place eight years later. I’m sure we’re not supposed to think about it too much. The toy company wants to bring back Good Guys dolls, but they somehow mix Chucky’s blood into a new doll, once again restoring him to life. Andy has, after being kicked out of multiple foster homes, been sent to a military academy, and Chucky has himself mailed there. He realizes that he could try for a new host since he has a new body, and instead focuses on a kid living at the academy, who’s thrilled about the doll and rather nonplussed by his violent tendencies. Like most movies about military school, this one makes it look brutal, unfair, and terrifying. The colonel bullying cadets might be scarier than the killer doll. During the war games, Chucky puts live ammunition into some of the rifles being used, and also gets his hands on a grenade, trying to cause chaos so he can do his voodoo bit with the kid. Andy’s dorky roommate (who really never seems as pathetic as the dialogue makes him out to be, but hey, informed attributes combined with military abuse), Harold Whitehurst, sacrifices himself to save everyone else from the grenade. Andy chases Chucky to a nearby carnival, which is shown earlier in the film so it doesn’t TOTALLY come out of nowhere but still kind of breaks the theme, where the doll ends up being shredded by a giant fan. There’s also some romantic chemistry between Andy and a female cadet, even though it felt like they were shipping her with Whitehurst earlier on. The film ends with Andy being taken by the police for questioning, and I don’t think we see him again for twenty-two years. It’s some time before there’s another movie in the series at all, and I understand that one, like many later horror sequels, focuses on the killer. 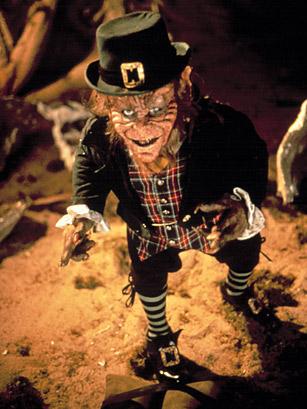 Leprechaun – This one is a horror comedy that isn’t particularly scary or funny, but I think it deserves a watch for the weird novelty value. I’m not sure anyone knew what kind of movie this was supposed to be, or how it would work. The titular leprechaun, played by Warwick Davis, is trapped in a box by an Irish guy living in North Dakota who stole his gold, but not until after the fairy kills his wife. Ten years later, a guy rents the house, and his daughter, a pre-Friends Jennifer Aniston initially hates the idea but starts to warm to it because she thinks a local painter (named Nathan, giving my name a better showing than Sophie’s Choice did) is hot. He works with his little brother Alex and a mentally challenged guy named Ozzie, with the kid acting like the adult of the two. When Ozzie inadvertently frees the leprechaun, the little person is still obsessed with finding his gold, which turns up in an old truck. The leprechaun goes off to murder a bunch of people who have no idea what he’s talking about, or at best know about the gold but don’t know it’s his. I’m not sure why he doesn’t ask people nicely first, but I guess that’s just not his personality. It was generally unclear what the extent of the Leprechaun’s powers were. Why is he sometimes able to teleport, and other times has to ride a tricycle or a toy car? Does he just go for whatever looks the most ridiculous? He does mention that he doesn’t have the full extent of his power without the gold, but it’s still not defined what he can and can’t do in either situation. One thing they did take from actual Irish folklore is that leprechauns are shoemakers, although I don’t know that there’s any precedent for their having to stop and polish every shoe they come across. I guess it’s because of this that you see people’s feet a lot, even in scenes where the Leprechaun isn’t around. It’s worth noting that there was a bit where the Leprechaun tries Lucky Charms and doesn’t like them, but it’s actually the generic brand “Lucky Clovers,” I guess because General Mills wouldn’t play ball. LA Gear, on the other hand, was apparently perfectly willing to be involved with this.