Today, I’m back from the dead (that might have worked better if I hadn’t just written yesterday) to talk about three Frankenstein movies. There are SPOILERS for all of them, as well as the original novel. 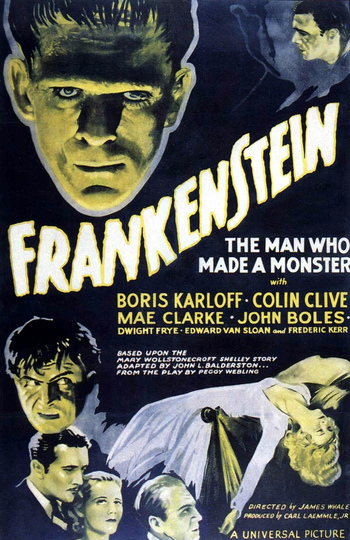 Frankenstein – The original 1931 film that made Boris Karloff famous, even though his name isn’t even in the opening credits. They also identify the author of the original novel as “Mrs. Percy B. Shelley,” which is pretty sexist. I read the book some years ago, and while there’s a lot I don’t remember so well, it’s obvious they made some significant changes. That’s par for the course, obviously, especially considering how short the film is. Still, it’s weird that they switched the first names of the titular character and his best friend, so he’s become Henry Frankenstein. Apparently Victor sounded too foreign for American audiences at the time, at least for the protagonist. I guess it didn’t matter for a supporting character. Speaking of names, this introduces the goofy hunchbacked lab assistant with no equivalent in the book who’s become a staple of the genre in general, but he’s called Fritz, not Igor. It gets right into things with Victor…sorry, HENRY, and Fritz digging up the corpse of a hanged man to use in their experiment. Then Fritz accidentally drops the brain he was trying to steal and takes a criminal’s brain instead, making me wonder if the moral is no longer that there are matters in which humanity should not meddle, and instead that they shouldn’t use inferior parts while meddling in such matters. We get the cool effects with the Monster being brought to life, and learn that he’s afraid of fire. I don’t think there’s any precedent for that in the book, but if someone were waving a lit torch in my face, I’d be pretty terrified too. Maybe it also has something to do with the Prometheus connection. There’s a line in the creation scene, “Now I know what it feels like to be God!”, that was edited out back in the 1930s but restored for the DVD release I watched. The same goes for the Monster throwing a little girl in a lake. Anyway, Frankenstein goes back to his family estate, leaving his old teacher Dr. Waldman to kill the Monster, but the creature strangles Waldman, escapes, and wanders around, killing people often without meaning to. The movie wraps up with the angry townspeople setting fire to a windmill with the Monster inside, with Frankenstein’s life being saved when his creation throws him to the ground. A brief, abrupt scene at the end shows Henry recovering, which I guess is supposed to be a happy ending even though the whole thing was largely his fault. But then, he’s from a rich family, so he doesn’t necessarily have to face consequences. The Monster’s appearance is iconic, with the greenish-gray makeup used on his face leading to the idea of his being green in color, even though promotional material from the time made his skin yellow as per Shelley’s description.

Bride of Frankenstein – The movie begins with a rather hammy scene of Shelley, her husband Percy, and Lord Byron discussing the novel, except the recap includes stuff from the first movie that wasn’t in the book. The actress playing Mary Shelley is Elsa Lanchester, who is also the Bride, but we don’t see her until very late in the game. I had forgotten that the Monster does try to force his creator to make him a wife in the novel, although he never finishes doing this, so the scenario here is kind of a what-if. The Monster befriending a blind man and learning to speak were also from the book, although Karloff’s Monster never becomes as much of a chatterbox as Shelley made the characters. While I guess the intent of the original film’s ending was that the Monster died in the fire, here he turns out to be alive, and continues with his rampage, but also saves someone. Dr. Septimus Pretorius, a teacher of Henry Frankenstein’s who had been kicked out of the university, recruits his old student to make a mate for the Monster. He points out that the murders were really Henry’s fault, but that’s apparently to blackmail him rather than because he’s actually concerned about the scientist’s culpability. It turns out that Pretorius has created a bunch of tiny people with chipmunk voices whom he keeps in jars, which seems way wackier to me than anything else in the story, but they end up not playing a significant role. When the Bride is finally created, her reaction to the Monster makes him think she hates him. A little premature, perhaps, but who said one reanimated corpse creature would automatically have feelings for another? The Monster then destroys the laboratory with him and the Bride in it, letting the humans escape. One thing I found particularly notable in this one was the prominence of old ladies who complain about everything. It’s been said many times by pedantic people that Frankenstein is the name of the doctor, not the Monster, which is true in the book, the first movie, and most of this one. But towards the end, Pretorius says the film’s title, and the Bride is clearly intended for the Monster and not the scientist. But I understand that the title of the next sequel, Son of Frankenstein, refers to the son of the scientist. Can’t they make up their minds? Really, it would make sense for the Monster to share the surname of his creator, who’s basically his father, but of course this is complicated by Victor/Henry’s rejection of him. And I’m not sure Frankenstein ever earned his doctorate anyway; he’s a medical student when he performs his experiment in the book, and I don’t know that the films specify.

Mary Shelley’s Frankenstein – As the title suggests, this 1994 film makes more of an attempt to faithfully adapt the novel, which isn’t to say that it’s entirely faithful. The name was probably inspired by Bram Stoker’s Dracula, released a few years earlier (although it wasn’t the first film of that title). It includes many of the elements that the Universal films omitted in order to streamline things, including the frame story with Frankenstein meeting an explorer trying to find the North Pole, and a look into Victor’s childhood and study in medicine. And while his fiancee Elizabeth was a character in those other two movies, they were ambiguous about her origins, probably because she was raised as his sister in the novel (although they aren’t related by blood; she was adopted from an Italian family). In this one, however, they make a point of how they’ve changed from siblings to lovers. But then, how often does Helena Bonham Carter play a character who isn’t disturbing? I think the filmmakers purposely tried to distance the creation of the Monster from the iconic Universal approach (the book glosses over this part), but the process involves so much running around that I suspect Kenneth Branagh’s Frankenstein WISHED he had a hunchbacked lab assistant to help him. The boarding house where Victor sets all this up is incredibly large, but hey, rich and indulgent parents. The Monster escapes and Victor assumes he’s dead, so he returns home to take over his father’s practice, which I guess means this is one case where he really can accurately be called Dr. Frankenstein, although admittedly this is AFTER his most famous work. Another bit that isn’t in the book is his bringing Elizabeth back to life after she’s killed by the Monster, which is combined with his aborted attempt to make a wife for the Creature. And it’s pretty timely now that the movie involves a pandemic (cholera in this case) breaking out in the area where Frankenstein is studying, a quarantine, and a guy so against being vaccinated that he murders Dr. Waldman for trying to do so. I liked the movie pretty well, but I don’t think it made much of an impact on the story in popular culture. Robert De Niro as the Monster lacked Karloff’s distinctive look, but I do think he was a more accurate portrayal of a guy made from parts of corpses. I know Beth, who had seen the movie before, really liked Tom Hulce’s portrayal of Henry Clerval.

I looked up the name “Frankenstein,” and it is a real name that apparently means “Frankish stone,” being a place name before people started using it as a surname. “Franks” was a name that was used for people from many different Germanic tribes, and of course the country of France took its name from them. Although it’s debatable, the name might come from a word meaning “free,” so “Frankenstein” would be “stone of the free.” There were nobles of this name in and around Germany. In some adaptations, including the Universal movies, the famous Frankenstein’s father is a baron. This wasn’t the case in the original novel, which had the family living in Geneva in a time when the nobility were losing influence. I don’t think the Universal films specify the Swiss setting, at least not in the first two.

2 Responses to We Belong Dead