It’s Thanksgiving, and we were originally planning to visit Beth’s mom and uncle today, but then we both tested positive for COVID. So we’re staying at home, and I’m not even sure what we’re going to have for dinner. At least I don’t have to drive, I guess. Anyway, here are the rest of the Thanksgiving-related media we watched recently: 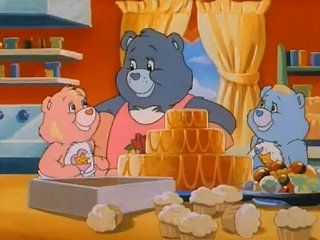 Care Bears Family: Grams Bear’s Thanksgiving Surprise – Share Bear goes to an American town to help out a kid who’s giving a speech on the meaning of Thanksgiving. In the same town, a baker called Sour Sam is giving away crabby apple pies that make anyone who eats them mean and nasty. 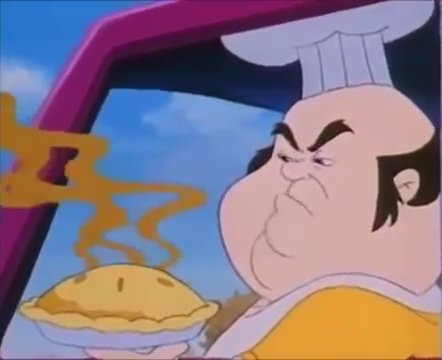 How does he keep that hat on his head?
Meanwhile, Grams Bear is coming to visit Care-a-Lot (so she doesn’t live there?), and Tenderheart is shocked to find out that she’s taken up dancing and playing electric guitar. The secondary lesson for this episode is apparently not to get worried when old people get new hobbies. Share Bear has to call for reinforcements, and it turns out that Grams’s happy apple pies are an antidote to the crabby ones. When Sam learns this, he kidnaps her and puts her in a pie, but the Care Bears and their cousins are able to destroy his factory with the formidable Care Bear Stare. The kid then cures everyone who’s still enchanted with his impassioned speech on the meaning of Thanksgiving.

The Berenstain Bears Meet Bigpaw – Yeah, they apparently couldn’t get enough of bears celebrating Thanksgiving back in the eighties. I hadn’t seen a Berenstain Bears cartoon in a long time, but this one didn’t totally fit with how I remembered their world. It has talking animals, but they’re basically just stand-ins for people in a generally realistic setting, despite the surreal appearance of their home. 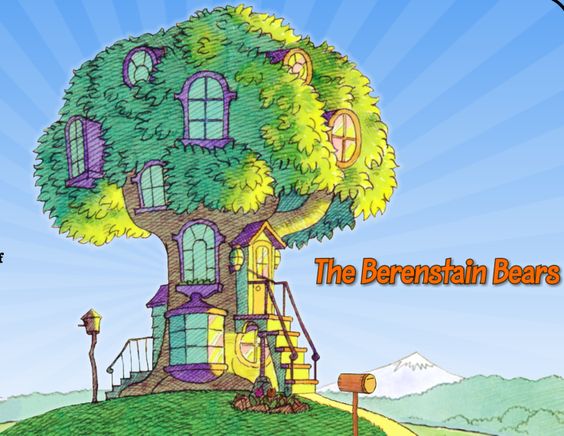 How do those top windows work?
But here we have plants weeding themselves and mixed nuts growing on a single tree. The Bigpaw of the title is first introduced as a sort of boogeyman, with Mama telling the kids that he’ll destroy their entire civilization if the bears aren’t nice to each other. It turns out that Bigpaw is real, and really big, but he’s also friendly.

Brother and Sister find this out and manage to stop the angry mob of townsfolk who want to kill him, after which he shares Thanksgiving dinner with the Bear family. The story is told in verse with several songs, one of which has Papa claiming that Bigpaw “makes King Kong look like Singer’s midgets,” a bizarre line for multiple reasons. It also really plays up Papa’s buffoonery. Hey, were they called Papa and Mama before having cubs? Brother Bear was Small Bear before Sister was born, so is it just common in this world to change your name based on your role in the family? I guess you could ask the same about Grams Bear, who I don’t think is even explicitly stated to be Hugs and Tugs’s biological grandmother, just their caretaker. And yes, it’s definitely Berenstain, not Berenstein, although I can see why people would misremember it as the latter, as not too many names end in -stain. Ockham’s Razor and all that, you know.

Addams Family Values – While this movie doesn’t take place during Thanksgiving, it does address the holiday. Gomez and Morticia have a new baby, Pubert, apparently the name Charles Addams originally suggested for Pugsley. Wednesday and Pugsley are jealous, homicidally so, and Morticia wants time to herself, so they hire a nanny, the very perky Debbie. She’s actually a black widow who had murdered three husbands previously, and wants to do the same to Fester. When Wednesday starts to catch on to her plan, Debbie talks the parents into sending the kids to a summer camp run by a disturbingly cheerful couple. They put on a play about the first Thanksgiving, during which Wednesday points out the hypocrisy of the story’s attitude toward Native Americans, and leads the outcast children in launching a revolution at the camp. 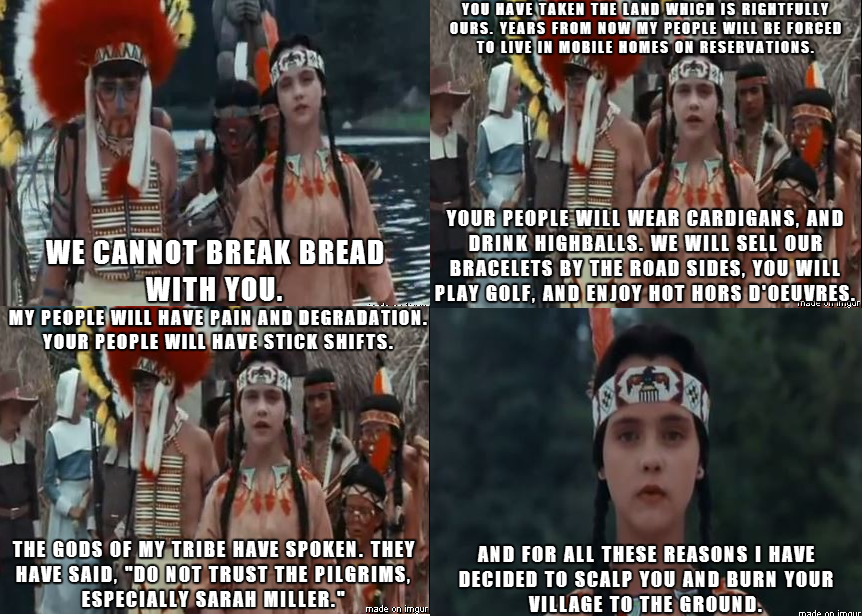 She also has a budding romance with a nerdy kid. Debbie succeeds in seducing and marrying Fester, but finds him incredibly difficult to kill, although she does break his spirit. 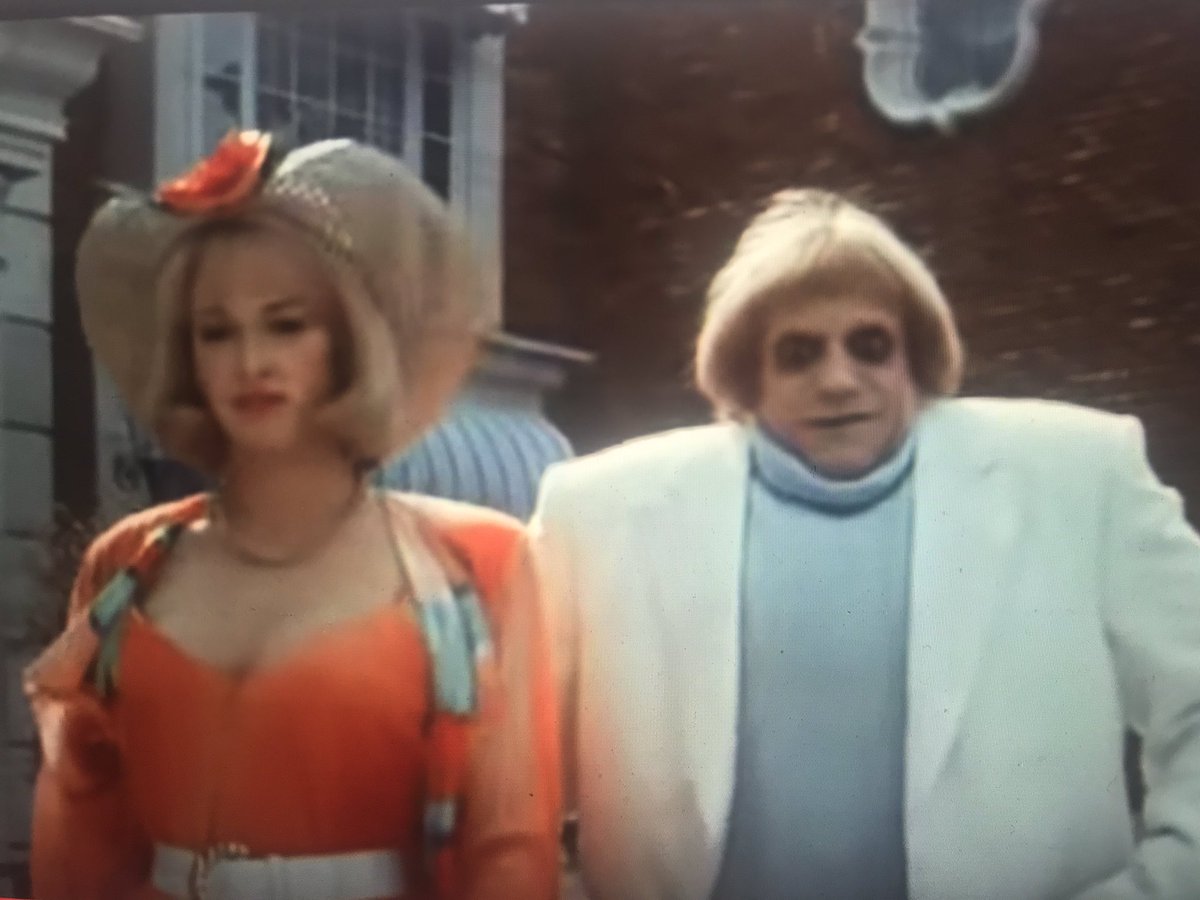 Thing helps Fester to escape, but Pubert has to save the family when Debbie tries to electrocute all of them. I appreciated that the Addamses don’t mind that Debbie is psychotic, and even respect it to an extent, but they hate that she has terrible taste and is keeping Fester away from his loved ones. I haven’t seen that many episodes of the sixties sitcom, so I was a little surprised when I recently saw a mention online of how Wednesday’s cynicism was new for the nineties movies. It’s a little out of place for the family, as despite their morbid aesthetic and sometimes casual attitude toward death and destruction, they tend to like everyone they meet and see the best in everyone, often naively so. That’s still true of the adults in this film, I guess Wednesday has become a grunge-era teenager. And the revenge against the camp directors works because they’re essentially anti-Addams, very bright and cheerful in appearance but not so subtly hiding incredible intolerance, as opposed to the creepy but good-hearted and accepting protagonists. Another change from the show is that Fester is Gomez’s brother instead of Morticia’s uncle, and I’m not sure why they did that, but it’s apparently not the only incarnation of the family where this is the case. 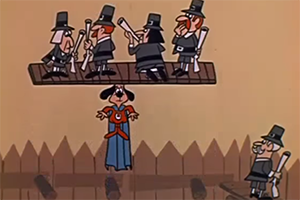 Underdog: Simon Says “No Thanksgiving” – Beth has a thing for the late Wally Cox, who did the voice of Underdog, so we pretty much had to watch this one. Simon Bar Sinister has an evil plot to take over the city that constantly becomes more ridiculous. He has a small army that would be pretty easy to defeat on their own, but he’s also using two buttons, one of which creates an air raid siren, while the other locks everyone inside. But Simon didn’t consider that the day he wanted to implement the plan was Thanksgiving, and he’s unable to get across the street to the buttons because of the parade. So his solution to this is to go back in time to 1621 and stop the first Thanksgiving. Underdog and Polly Purebred follow him back, though, and are able to prevent his attempt to sow discord between the Pilgrims and Indians.

B.C.: The First Thanksgiving – Johnny Hart’s comic strip is about cavemen living in a barren wasteland alongside talking animals, and contains a lot of anachronisms. The gags are often simple puns or sarcasm, but other times they seem to be total non-sequiturs. And once Hart became a born-again Christian, it was also a way for him to proselytize, but I believe that came after this 1973 holiday special. You might think it would be difficult to turn such a weird comic into a half-hour cartoon, and you’d be right. It does sort of have a plot, with B.C. discovering fire (after burning his hand with it), then a woman using it to cook soup, sending the men out to find a turkey to flavor it. The only turkey in the area can talk, and constantly eludes the cavemen, as they aren’t too bright. The whole thing moves very slowly, with a bunch of bits that are sort of structured like jokes. By the way, the woman cooking the soup was apparently officially named Fat Broad, although that’s not mentioned in the special.

2 Responses to Quit Jiving Me, Turkey