Mickey Mouse: The Ice Sword Saga, by Massimo De Vita – The ninth in the Disney Masters series highlights this Italian artist, in a tale where Mickey and Goofy are transported to an alternate world based on Norse mythology. The evil Prince of Mists is demanding tribute from the people of Ululand, and the sage Yor tries to summon the ancient hero Alph who had defeated the Prince ages earlier. When he brings back the Mouse and the Goof instead, the latter turns out to have an uncanny power to dispel the Prince’s illusions simply by not believing in them.

They encounter giants, a yeti, and the Queen of Hel who wants to marry Goofy, before saving the day by plunging a magic sword into a stone.

In the follow-up, “The Great Tournament of Argaar,” Mickey and Goofy return to the magical land to find that it’s now a futuristic place with flying cars and elevated highways. Unfortunately, it’s on the brink of destruction, and the mineral needed to prevent apocalypse is being kept by the cruel King of the Bedi, and he’ll only agree to help out if Goofy takes his place in a tournament. A toy he’s obsessed with turns out to be key to winning. De Vita does an excellent job at creating an entire new world for familiar characters to explore, and introducing some of his own entertaining creations.

There’s a second collection of stories in this series, but since it’s not free with a subscription on Comixology, I haven’t read it yet. 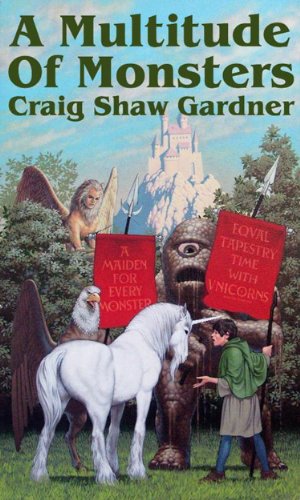 A Multitude of Monsters, by Craig Shaw Gardner – The second book in the Ebenezum Trilogy sees the wizard and his apprentice Wuntvor continuing the travel to Vushta to find a cure for Ebenezum’s allergy to magic and stop the demons of the Netherhells from invading the surface world. They meet up with a group of monsters demanding equal treatment, including griffins, hippogriffs, rocs, satyrs, and centaurs, as well as a Bog Wombler. We never quite find out what one of those actually is, but there’s a picture of the cover (it’s the gray thing with one eye), and wombling turns out to be quite powerful. It also introduces Tap the Brownie, an annoyingly cheerful little guy with a desire to prove how formidable his shoe-based magic is. As with the other Gardner books I’ve read, not all of the jokes land, but enough do to make it an amusing light read. 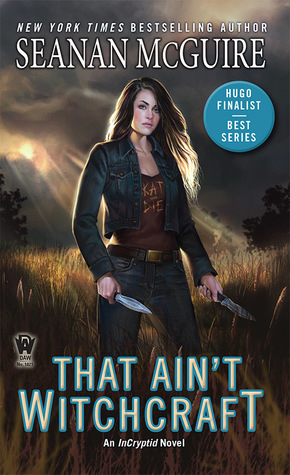 That Ain’t Witchcraft, by Seanan McGuire – The eighth book in the InCryptid series, and the third to feature Antimony Price as the protagonist, has her, her friends, and her boyfriend Sam renting a cabin in Maine. This leads to their meeting James Smith, sorcerer with ice powers and son of the local chief of police. Antimony has made a deal with the crossroads in return for an unspecified favor, which turns out to be killing James. To prevent this, she instead comes up with a plan to defeat the supernatural parasite that’s taken control of the crossroads. This also involves making a temporary truce with Leonard Cunningham, heir to the Covenant of St. George, who is determined to bring Annie back into their cryptid-killing fold. While Annie’s friends include some cryptids, there does seem to be a bit of a focus shift in her arc, focusing more on sorcery and ghosts. That’s all right, though, as the stories are still quite enjoyable. And there’s also some killer wheat.