Goodness Makes the Badness Go Away

Babes in Toyland (1961) – My friend Jared Davis actually wrote about a whole bunch of different adaptations of this story, and how they differ, so you might want to check that out for some additional details and opinions. It started out as an operetta around the turn of the twentieth century, sort of a follow-up to the original stage version of The Wizard of Oz. As was typical of shows of the day, the plot was pretty loose and songs would often have nothing to do with the story. Beth was interested in seeing the version from the fifties with Wally Cox as the Toymaker, but that one wasn’t available on streaming services. This was Disney’s first live-action musical film, but it had a lot of cartoonish gags. There are also a lot of long song-and-dance sequences, to be expected in a musical, but the pacing seemed rather weak. It included several songs from the original stage show, but usually with different lyrics or at least different arrangements. It starred Annette Funicello as Mary Mary Quite Contrary, Ed Wynn as the Toymaker, and Ray Bolger as the villainous Barnaby. It starts out with the nursery rhyme characters gathering for Mary’s wedding to Tom Tom the Piper’s Son. Barnaby somehow knows that Mary is due to inherit a bunch of money when she gets married, so he sends his goofy and greedy henchmen Gonzorgo and Rodrigo to kidnap and drown Tom.

They do the former, but decide to sell Tom to some gypsies to make extra money. They also steal Bo Peep’s sheep, their wool being the only source of income for the nursery rhyme folks live. I’m not totally sure how this arrangement works, but I guess Mother Goose runs a boarding house for a bunch of children, and Mary also lives there? Or are they all related? I know some versions include the old woman who lived in a shoe and all her children, so all the kids living together could be a holdover from that. Since they need money, Mary agrees to marry Barnaby, at least until Tom turns up alive with the gypsies. The kids go into the Forest of No Return to look for the lost sheep, and…they never find them, making a weird plot hole. I guess they don’t technically need them when Mary finds out about her inheritance, but it’s a real lack of resolution. Instead, they’re captured by walking, talking trees and taken to Toyland, where the Toymaker’s assistant Grumio has just made a machine to automate toy production. No, it’s not a commentary on how automation puts people out of work, but instead the setup for a gag where the Toymaker overloads the machine and it explodes. He worries that they won’t be able to meet the production deadline, but the kids are only too thrilled to help out in the factory, child labor laws be damned. And there are only, like, five of them anyway, when the Toymaker was earlier talking about needing millions of toys.

He mentions Christmas as a deadline, and I think that might be the only mention of the holiday in this version, although it’s much more significant in others. What little plot there was largely goes by the wayside here, but Barnaby does show up and use a shrinking ray that Grumio invents to force the Toymaker into marrying him to Mary. But Tom and the kids, along with Barnaby’s henchmen who think he’s going too far, use the toys to stop him. I have to say that the talking trees looked better in the 1939 Wizard of Oz over twenty years earlier, but I suppose that had a bigger budget.

And I think they kind of wanted it to look like a stage play, what with the curtain at the beginning and everything. As for other versions of this story, I’ve heard the Laurel and Hardy one is good, and I’m kind of interested in revisiting the generally reviled one with Drew Barrymore and Keanu Reeves that I remember seeing at least part of years ago.

The Glo Friends Save Christmas – This was a toy line that started with Glo Worms, then expanded into other glowing animals. There was a cartoon that ran alongside My Little Pony, but this special actually came before the show. As an introduction to the characters, it doesn’t work, because there are a whole lot of them and we don’t learn anything about most of their personalities. Maybe we’re supposed to already know them from the boxes the toys come in. Their village appears to be near the North Pole, where a wicked witch is plotting to capture Santa Claus and destroy Christmas. Hey, I thought Jesus was the reason for the season! Leave it to a cartoon about toys to make this materialistic! Seriously, I’m down with secular Christmas, but it’s sometimes weird how these specials suggest the holiday just doesn’t happen if Santa is somehow incapacitated. And I don’t think it’s even necessarily about the presents, just that he IS Christmas. It’s part of how the modern Santa figure is a combination of two originally different figures, the gift-giving St. Nicholas and the anthropomorphic personification Father Christmas. Not that the writers necessarily thought about that when coming up with this. What’s interesting about this special is that Santa is voiced by Carroll O’Connor and the witch Blanche by Sally Struthers, AKA Archie and Gloria from All in the Family. The witch is accompanied by a live mink she wears and a moose with the voice of Garfield.

She has a song about wanting to be famous, and Santa a blues song about not having Christmas. The Glo Friends combine their powers (similar to the Care Bear Stare, but without the belly symbols) to melt the ice cage in which Blanche traps Santa and his reindeer, with some help from the moose, who switches sides. Since Blanche looks like she lives really close to Santa, why is she only getting the idea to capture him this year? Or does she do that regularly?

Saved by the Bell: Home for Christmas – I haven’t watched that much of this show, but I’ve seen enough to know how terrible it is. It’s lazily made and nothing in it makes sense. Television executives think kids will watch anything. And this show was popular enough to be revived a few times, so they’re probably right. Tis one is a message episode, probably a network mandate, so it tries to teach a lesson. It’s also a two-parter. Zack Morris, everyone’s favorite psychopath (okay, he’s probably actually one of the less popular psychopaths), gets a crush on a girl who turns out to be homeless. So the audience is heavy-handedly informed that being homeless doesn’t mean you’re a thief or a junkie (and right after the Reagan administration put in all that work to make us think they were!). It really seems like they go out of their way to make the girl’s father basically perfect. He’s friendly, helpful, can play the piano, and is only out of work due to his previous workplace closing. At the end of the second part, Zack’s mom decides to let the two homeless people stay at her house. And no, they don’t ever show up again after that. I guess the generous interpretation is that he got a job the next week or something, but I’m sure that’s more thought than the writers put into it. And while this is going on, we get the usual really terrible jokes, including a painful sequence where a baby doll won’t stop wetting itself. Screech in particular seems to have been written as if he’s not just dumb and awkward, but an alien trying to adapt to life on Earth. If I’m interpreting it correctly (and who knows with this show?), one bit hinges on his not having heard of Christmas wrapping. The best part is probably a lady trying to strangle Slater.

The Smurfs’ Christmas Special – This was from 1982, in the second season of the Smurfs cartoon show, which I did watch as a kid. I can’t remember whether or not I saw this one, though. The Smurfs are preparing for Christmas, while nearby an old man is riding a sleigh with his grandchildren. When he gets injured by wolves, the kids go to find help, and end up meeting with the Smurfs. Meanwhile, Gargamel wants to destroy the Smurfs, as usual. Looking back, it’s weird how sad they made Gargamel. He lives all alone, admittedly in a castle, but a rather shabby one. He walks with a stoop, wears patched clothing, and his cat is his only friend. He needs some kind of hobby other than chasing little blue men around. It was apparently explained in the cartoon show that his mother abused him. He’s sometimes said to want the Smurfs to turn them into gold or to eat them, but often he just wants to hurt them because they piss him off. This time, he’s particularly annoyed by how happy they are at Christmas. He meets with an unnamed villain who seems to be more evil than he is, who offers to give him directions to the Smurf village and a spell to destroy it in exchange for Gargamel kidnapping the two kids, so the guy can get revenge on their uncle. 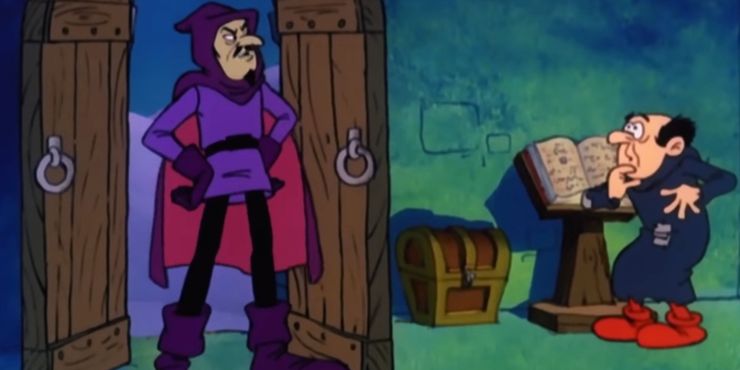 When he tries to double-cross the more evil guy by leading the kids’ uncle to him so he can collect the reward money, the cloaked man captures the wizard and the children and traps them in a circle of fire. The Smurfs save the day by singing a song, making the kids and Gargamel join in. His revulsion at the song is pretty amusing. I’m a little surprised Santa doesn’t show up at all, although the children mistake Papa Smurf for him.