I usually don’t like to make two of the same kind of post in a row, but ’tis the season, so here are some more reviews of Christmas-related audiovisual media.

Santa Claus – I’d heard of this 1959 Mexican movie, sometimes called Santa Claus vs. the Devil because of how vague the original title is, but hadn’t seen it before. I was just thinking maybe I should, and Beth noticed the Mads from Mystery Science Theatre 2000 were doing a live riff on Tuesday, so we watched that. 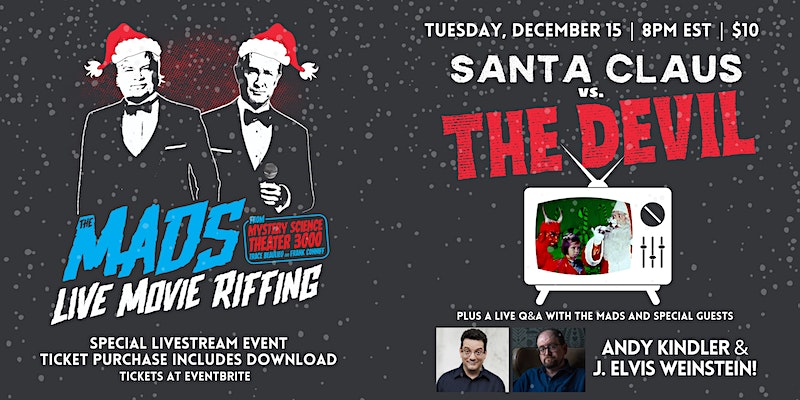 It was done as an MST3K episode years ago, but I never saw that either. They did say the jokes they did this time were new as far as they could remember. The movie is insane enough without the commentary, but it’s also kind of slow, so the humor helps. The version shown was really crisp-looking, and had about twenty minutes cut out. It simultaneously tries to make Santa more epic for the space age AND limits its scope to just a few kids in Mexico City. Santa lives in a cloud in space above the North Pole, and instead of elves has a bunch of children from around the world helping him, as well as Merlin.

They use equipment that looks like a creepier version of the living furniture from Pee-wee’s Playhouse, and Santa’s laugh sounds rather sinister. Not only can they watch and listen to anyone on Earth, but could also see into their dreams. The reindeer are mechanical and will turn to dust if they don’t get back to the castle by sunrise, and Santa tells the kids that he’ll starve to death if he stays on Earth because he only eats food made from clouds. I guess that means it’s pointless to leave out milk and cookies. His enemy is the Devil, or more specifically a devil called Pitch, who is charged by Lucifer with thwarting Santa’s mission. Did whoever wrote this just pull characters from folklore out of a hat? And the two opposing forces seem strangely underpowered. Pitch is able to influence people, but he only gets three bullying brothers on his side. So he mostly relies on setting booby traps for St. Nick. Santa is able to disappear and put people to sleep, but only with magic he received from Merlin and loses part of the way through. The biggest conflict is when Pitch sets a dog on Santa, who hides in a tree and looks like he’ll be stuck there all night until Merlin gives him the idea to distract it with a toy cat. It’s a slow, low-key battle between good and evil. 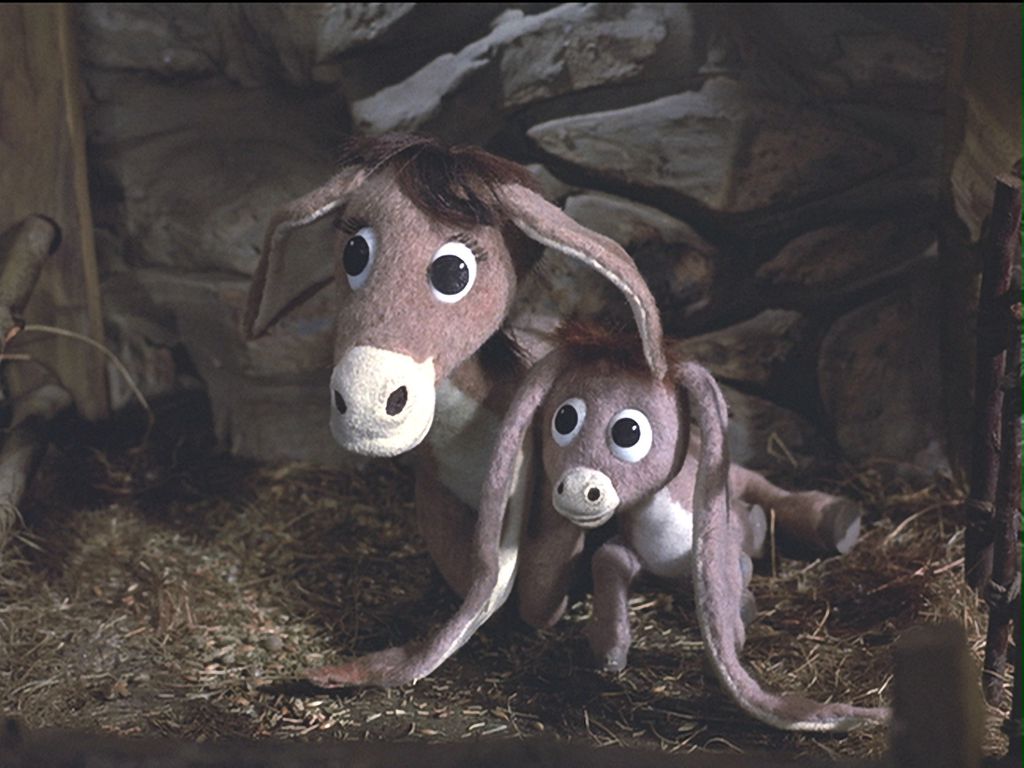 Nestor, the Long-Eared Christmas Donkey – There are still a few Rankin/Bass Christmas specials I haven’t seen, and this was one of them. It’s based on a song that was basically an admitted rip-off of “Rudolph the Red-Nosed Reindeer.” Gene Autry sang it, it mentions Rudolph in the first verse, and it’s about an animal who’s belittled for a disability. It kind of links the secular and religious aspects of the holiday, as the narrator is a donkey who lives with Santa at the North Pole, but the story is about his ancestor who brought Mary and Joseph to Bethlehem. It’s a story that’s been told a few times; I remember reading a picture book called The Small One that was also about this donkey. Roger Miller narrates the special and sings the songs. As the tale starts, even Nestor’s own family makes fun of him, except for his mom. After a centurion takes the rest of the family for the Emperor, Nestor’s mom saves him during a blizzard, but at the expense of her own life. Yeah, this one is dark, and it doesn’t help that the donkey puppets are really cute. Nestor then meets a cherub named Tilly who accompanies him to Nazareth or thereabouts, passing some dolphins on the way.

Because of his ears, he’s able to get Mary and Joseph through a sandstorm by following the voices of angels, also protecting the mother-to-be by wrapping his ears around her. Is this like how the Hylia have elf-like ears to better hear messages from the gods?

I noticed that the star the Wise Men followed was over Bethlehem when Nestor and company were on their way there, when I thought it was only supposed to have appeared when Jesus was born. But then, the Nativity story isn’t even consistent across Gospels, so how can we expect it to be in animated specials? The story is, as already established, rather derivative, but it gets credit for the animals being adorable. Tilly might be a little TOO cutesy, though. Are there any other media about disabled animals saving Christmas? Maybe a polar bear with brightly colored fur, or a Yule goat with extra horns? 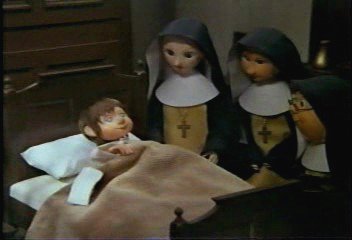 The First Christmas: The Story of the First Christmas Snow – I’d only ever seen this one on lists on Rankin/Bass productions, having no idea what it was about. That title is pretty bizarre. I mean, is it about the first CHRISTMAS, or the first time it SNOWED on Christmas? Both, sort of, but more so the latter. And even then, it’s not about the first time it EVER snowed on Christmas, but is specific to one small village near the sea. Its tone is more low-key and serious than most of its compatriots, which obviously tend toward silliness, wacky characters, and magic. A shepherd boy named Lucas is struck by lightning during a storm, which results in his going blind. He’s also an orphan, so the nuns at a nearby abbey, one of them voiced by Angela Lansbury, take him in, along with his flock and dog. When some kids from the nearby village decide to play a prank on him and hide his sheep, they end up running into the woods, and the boys have to help Lucas get them back. When they find that one of them has fallen into a hole, one child comes up with an idea that immediately works. You’d think they’d want to build some tension, but I guess it had to fit a half-hour time slot. During a pageant in which Lucas and the villagers participate, it miraculously snows for the first time in anyone’s memory, and the snow heals Lucas’ eyes. The priest, who had intended to send Lucas to an orphanage once he recovered, lets him stay at the abbey indefinitely, reasoning that someone needed to care for the sheep. The song “White Christmas” features prominently in this one, although apparently Irving Berlin initially didn’t want them to use it.