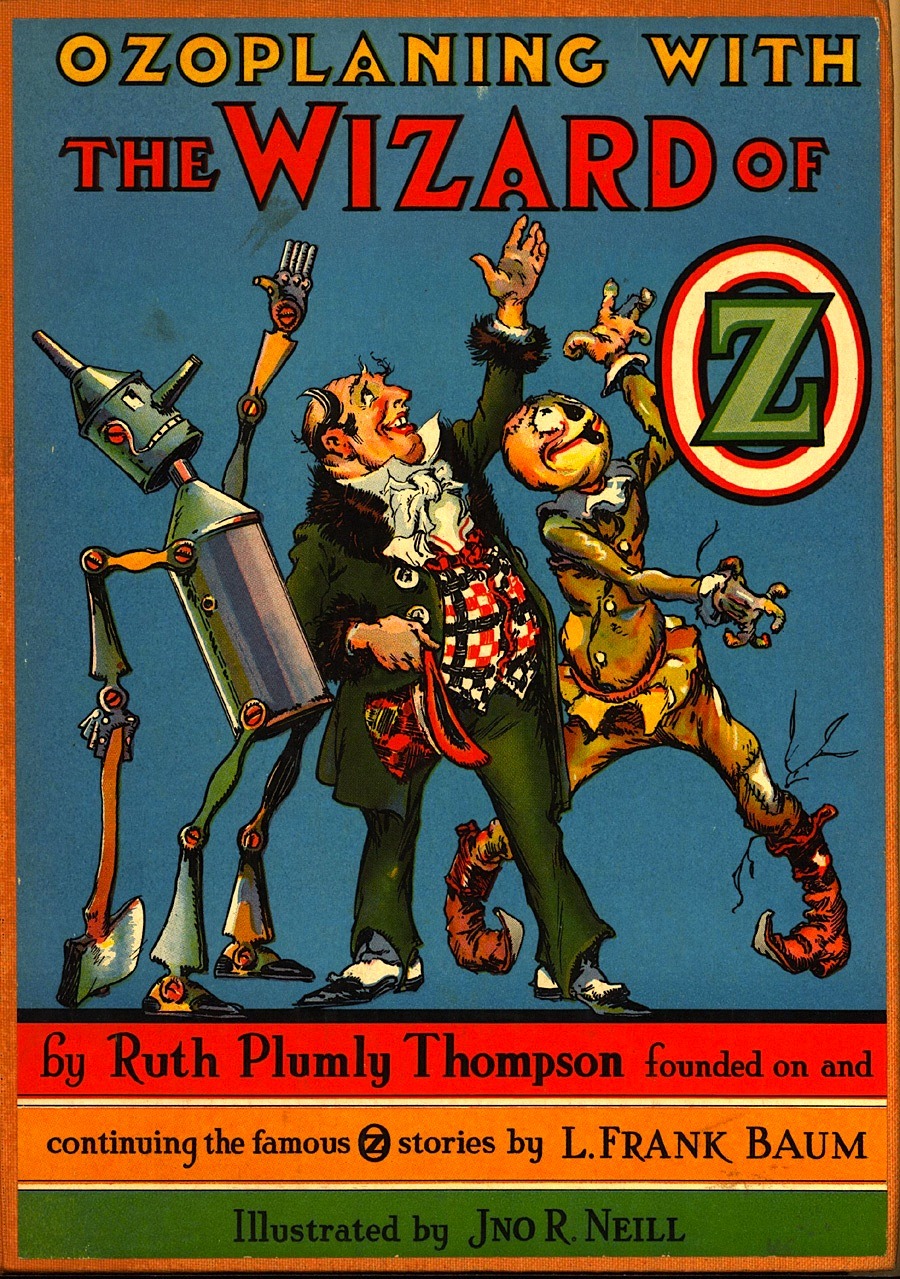 Ozoplaning with the Wizard of Oz, by Ruth Plumly Thompson – I can’t remember for sure why I wanted to give this one a reread, but it had been a while since I’d looked at it. It’s the last Oz book Thompson wrote for Reilly & Lee (she later had two others published by the International Wizard of Oz Club), and shows signs of having been written rather hurriedly, which is true according to Martin Gardner’s afterword for the Oz Club edition. It uses the old standby of someone trying to take over a country twice, with Strut of the Strat invading Oz and Bustabo usurping Red Top Mountain. The latter seems to be there mostly as a distraction for the protagonists to build up suspense, but it does make up a much more complete narrative than all the tiny communities in other Oz books, where the story is basically just the heroes entering the place, seeing how weird the inhabitants are, and then leaving. There’s not too much that distinguishes Strut from other terrible-tempered tyrants, perhaps the most interesting thing about him being how his wife Kabebe gets jealous of the attention he’s giving Jellia Jamb, but Thompson never goes as far as actually saying he’s a polygamist.

He’s powerful and persistent in his attempt at conquest, but no match for the magical defenses of Ozma’s regime.

It’s strange that Betsy Bobbin and Trot lead an evacuation of the Emerald City when Strut’s army arrives, and I get the impression it was mostly to keep the cast small when the Airlanders break into the castle. Granted, Ozma and the Wizard aren’t present at the time, but I would think her courtiers could seek help instead of just going to hide. It’s a recurring theme that it’s really easy for attempted invaders to get into the palace, but they’re all thwarted with magic before they can do that much damage.

Thompson used some science fiction themes in the book, as L. Frank Baum did a few times and she herself had in Speedy and Silver Princess. Her introduction to the book starts with, “I often have wondered about the Strat, have not you? Bet a bushel of peanuts you have!” Was public interest in the stratosphere a big thing in the late 1930s? Regardless, Thompson gives Stratovania an altitude that places it firmly in the stratosphere, and uses the idea that temperature decreases the higher you fly. It actually gets warmer above the ozone layer, though. The story makes use of solid air, even though the temperature in the stratosphere isn’t cold enough to freeze nitrogen or oxygen. Also, Stratovania has a warm climate, which would presumably melt the air used in its construction. It’s probably more common to the magical solid air that forms the wall around Nimmie Amee’s house in Tin Woodman. And there’s the prominence of moons and stars in Stratovanian decoration, when the distance to the upper stratosphere is negligible in relation to the distance to the Moon, let alone the stars. The magic gas the Wizard uses to inflate the balloons for the Ozoplanes is said to be “lighter than helium,” although I guess that’s technically true of hydrogen as well.

So it’s not good science, but it does use some scientific principles in fun ways.

And there’s a pulp feel to it in that it’s full of gadgets and action, and John R. Neill’s illustrations have more of a comic book feel to them than usual.

Stratovania itself has some familiar aspects, but a generally otherworldly feel to it.

The book was purposely released to tie in with the MGM film that came out the same year, although the publishers presumably didn’t have any knowledge of the movie’s script, so that mostly just means it’s presented as a reunion of some of the main characters from The Wonderful Wizard of Oz. The connection to the original book is the reason for the unwieldy title as well. The afterword lists some of the publisher’s suggested titles, one of them being “The Wizard of Oz and His Magic Skates.” Since there’s nothing resembling magic skates in the finished book, I wonder if that was a reference to an earlier idea that didn’t make it into the final product, or just the result of someone trying to come up with a title without knowing what the book was about.

Anyway, the story starts with the Wizard giving a party for the others associated with that journey, most likely the ones who could get there on short notice, so no Boq or Queen of the Field-Mice, and Toto and the Guardian of the Gates are unable to attend. Thompson gives significant roles to Jellia and the Soldier with Green Whiskers, who hadn’t been used all that much in previous books. I think this is the first specific confirmation that Jellia is the same as the green girl at the palace in Wizard, yet Thompson somehow misses the indication in Dorothy and the Wizard that the Soldier is the same as Omby Amby, instead giving him the name Wantowin Battles. His characterization seems a little off as well, but he’s not entirely consistent throughout Baum either. Thompson mainly seems to have taken his personality primarily from Land, where he runs away from Jinjur’s army and tries to make excuses for it. While the Soldier sort of appears in the film in the form of the palace guard, Jellia isn’t in it at all. The Tin Woodman is mentioned in nearly every Thompson book but doesn’t have a major role until this one, and he also comes across as a little out of character. His excessive pride is a recurring theme in Baum’s books, but Thompson pretty much ignores his gentler traits, even though he does mention his heart. The plot hinges on his being unaware of someone else’s feelings even when they’re literally displayed on his forehead. Dorothy is present, but downplayed; and the Scarecrow and Cowardly Lion provide occasional comic relief.

I find it interesting that the MGM film has the Wizard tell his subjects that he’s visiting a brother wizard in the outer stratosphere, when in the book it’s just “in the clouds.” Probably a coincidence, but it’s another indication that the stratosphere might have been part of the zeitgeist. Dorothy says near the beginning of the book, “Kansas, when I think of it, seems very far away–as much like a dream, I suppose, as Oz seems like a dream to boys and girls in Kansas who read Oz history,” and the MGM Oz turned out to be a dream. Bustabo dismisses Dorothy as unable to sing, and of course the film was a musical, but I doubt it was a jab at Judy Garland.

0 Responses to Leaving on an Ozoplane