Uncle Scrooge: The Twenty-Four Carat Moon – The title story here has a rather wacky plot, Astronomers discover another moon behind the regular one that’s made entirely out of gold. Scrooge, the Rajah of Eyesore, a cattle king in Texas, and the Beagle Boys all have their own rockets constructed to try to reach it first.

Hey, why isn’t Gyro Gearloose building Scrooge’s rocket? I like that the Beagles’ engineers look like evil caricatures of Mickey Mouse.
Scrooge and his family manage to trick their competitors, but it turns out that the golden moon is already owned by the King of Venus. He’s willing to trade it for a bit of dirt, which sounds unfair, but he’s able to use the elements in it to create a tiny planet. There’s another space story that teams up Scrooge with Gyro, who builds him a money bin that can’t be penetrated by any substance on Earth. But Scrooge locks himself out, so he and Gyro have to go to the Moon to find a harder mineral. Gyro’s insect-shaped rocket is an interesting creation.

Flintheart Glomgold, in his second-ever appearance, challenges Scrooge to another wealth contest in “The Money Champ,” this time converting as many of their assets as possible into silver dollars in order to compare them. There was an arc on the original DuckTales with a similar premise (I probably should watch the new version of that, but I already have a few shows on my plate, so to speak), but there it made even less sense. There’s some poetic justice for Glomgold when his pile of coins turns out to be smaller by just the amount he paid to cheat. “Uncle Scrooge and His Handy Andy” has the tycoon enter a yacht race just to sell things to the other participants. And in another hunt for a legendary treasure, Scrooge and company find the Flying Dutchman and discover why it appears to be sailing against the wind. 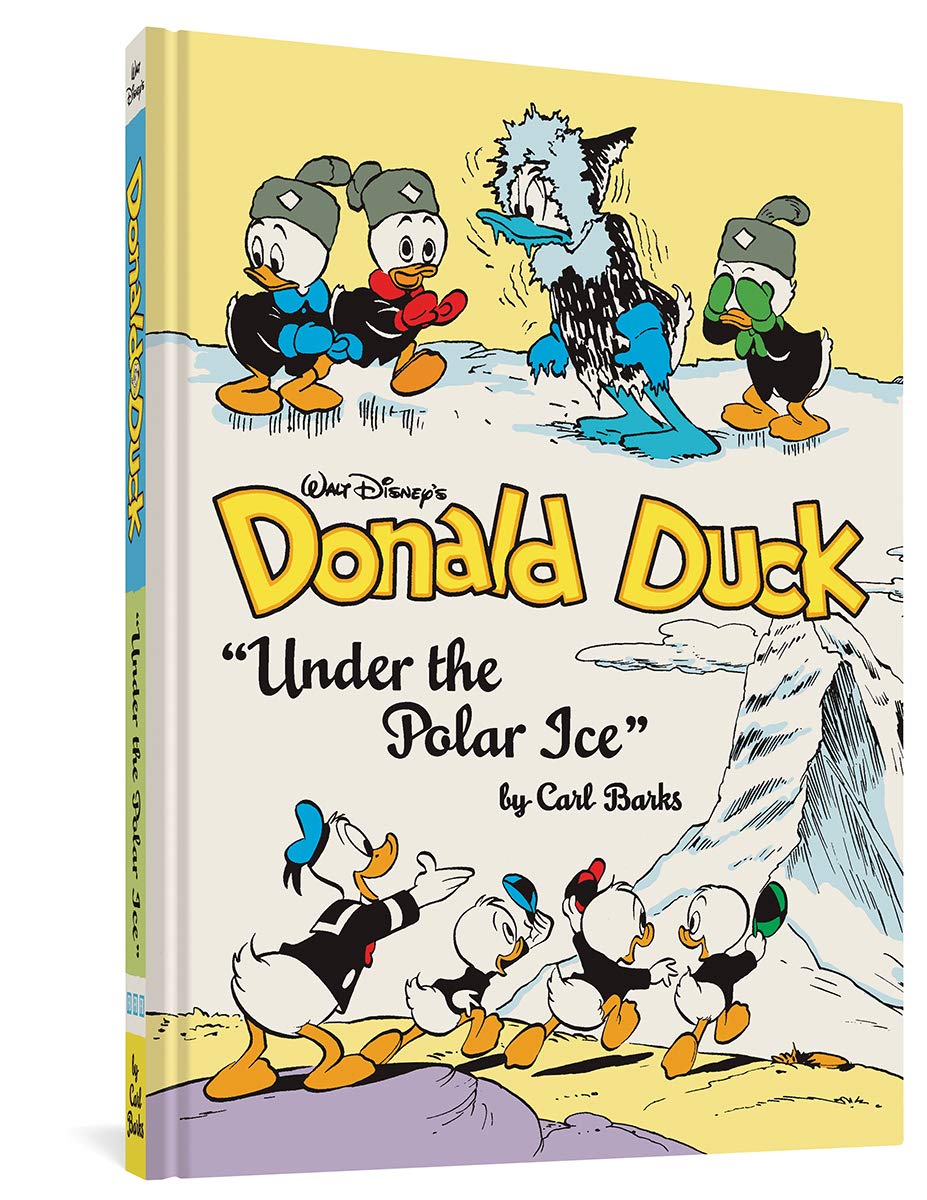 Donald Duck: Under the Polar Ice – The collection begins with the titular tale, in which Donald stows away on a submarine and finds that peeling potatoes isn’t as bad as freezing to death. It also includes “Black Wednesday,” which I mentioned before as never having been reprinted in the United States prior to this, and where the explanation for the plot really doesn’t make any sense. Scrooge fumigates his money on Black Wednesday because nobody else is around, but Black Wednesday started because of his money fumigation. I don’t think Barks intended it to be a logical paradox. In “The Wax Museum,” Donald takes a job as a night watchman, and when his nephews try to keep him awake by moving around the sculptures, he’s confused by a masquerade party next door. Notable in this one is that most of the sculptures and the masqueraders are drawn as human, only a few of them having the dog noses typical of background characters in Disney comics. Donald and nephews climb the Matterhorn, and find the Beagle Boys using a rocket sled, in a tie-in with the then-new Matterhorn ride at Disneyland. “Riding the Pony Express” has Donald doing a historical reenactment and stumbling across actual diplomatic mail. Along much the same lines, “Want to Buy an Island?”, has Donald buying one sight unseen, only for it to turn out to be a trick, with the island being a site of government experiments. Oddly, in this one, Huey, Dewey, and Louie are specifically stated to be in kindergarten, which doesn’t seem to fit with their general portrayal. Maybe this takes place before all the others. “The Christmas Cha Cha” has several intersecting plots. Donald is simultaneously practicing the cha-cha for a contest and selling Christmas cards while rhyming, and he and the nephews are pressed into service placing a tree on a pavilion roof for Daisy.

Also, Scrooge enters the cha-cha contest himself in hopes that he won’t have to provide the first prize, a silver punch bowl. There’s another one of Barks’s recurring jokes about rich people eating unusual animals.

Closing out the volume are a few comics with Daisy as the main focus, and others starring Grandma Duck, the latter of which were drawn but not written by Barks. Clara Cluck and Clarabelle Cow show up in the Daisy stories. 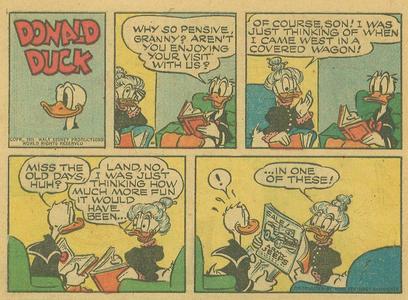 As the latter book notes, Grandma first appeared in person (or in duck) in Al Taliaferro’s newspaper comic in 1943, where she reveals that she came west in a covered wagon and has a stash of Confederate money.

Her exact relation to Donald varies from one source to another, but Don Rosa made her the granddaughter of Cornelius Coot, founder of Duckburg, and mother to Donald’s father Quackmore. Scrooge isn’t actually related to her in that continuity, but in some European comics, she’s his sister. In one of these comics, Grandma’s neighbor, Farmer Bumpkin, is a chicken who keeps his own chickens, and wears a toupee. Kind of weird considering that the Ducks treat the feathers on top of their heads as hair. Then again, Gyro is presumably a chicken, and he has hair.

When I was a kid, my dad brought a book back from Germany, Donald auf dem Bauernhof (“Donald on the Farm”), from which I learned that Donald’s nephews are Tick, Trick, and Track in German, while Grandma is Oma Duck. Come to think of it, I remember a few other Duck books I had in my youth, mostly Little Golden Books. 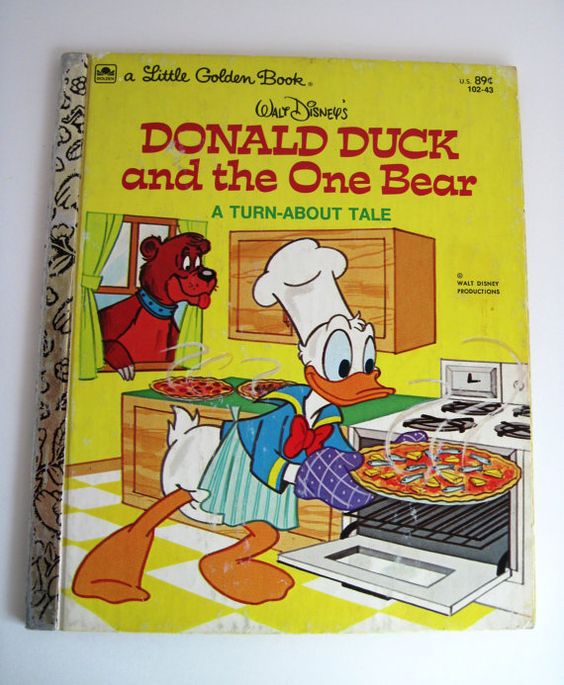 Donald Duck and the One Bear was put a twist on the Goldilocks story when a pizza-loving bear breaks into Donald’s house. According to this book, Donald is a big fan of pineapple and sardine pizza. In another one, Donald Duck: Instant Millionaire, Donald and his nephews stayed at Scrooge’s automated house, which had a creepy robot butler. 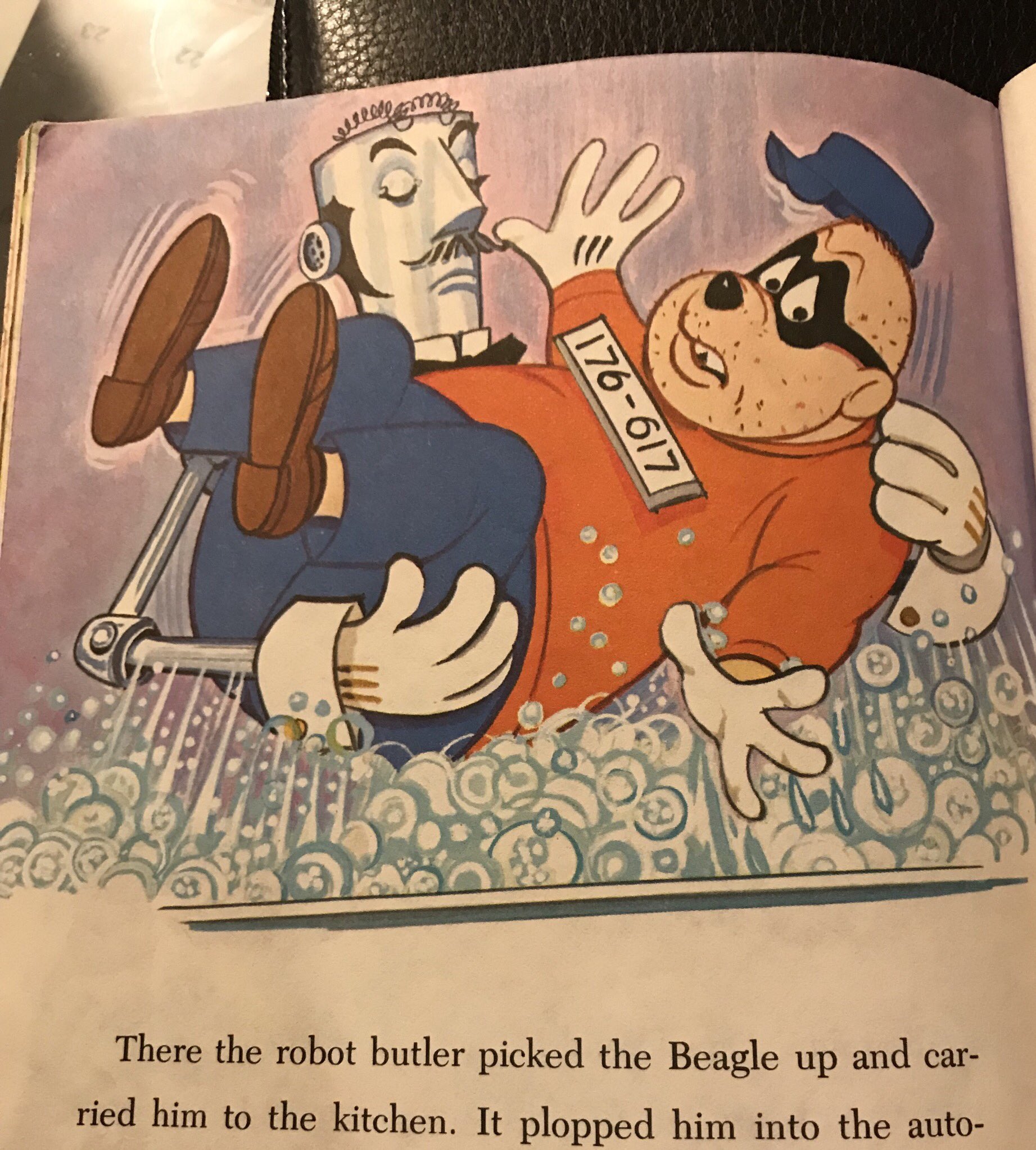 And Donald Duck and the Witch Next Door had Madam Mim from The Sword in the Stone move in next door to the Ducks.