Ostriches and Old Ones and Vampires, Oh My!

I’ve read a few new-to-me Oz books recently, and I’d like to share my thoughts on them. There are potential SPOILERS for all of them. 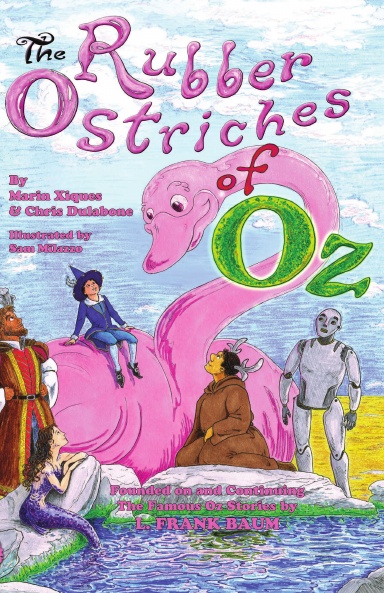 The Rubber Ostriches of Oz, by Marin Xiques and Chris Dulabone – Greg Hunter’s “Unc Nunkie and the White King of Oz” promised a follow-up addressing the plight of the rubber ostriches living in the Deadly Desert, and now it’s finally here. Co-author Chris actually died not too long ago, which makes the experience of reading this kind of sad by association, although the book itself is pretty cheerful. It also involves the robots from R.K. Lionel’s Braided Man. While Oscar Higher tries to seek help from Gayelette and thwart an energy-draining machine, the Shah of Lopperwomp and his attendant Brother Portcasa are sailing toward Oz for a visit. They come across the locations from John Dough and the Cherub, and accidentally set in motion the events of And Justice for Oz.The ending is the sort of thing that’s common for Chris’s books, where everybody (well, okay, not EVERYBODY) turns out to be enchanted and to have connections to each other. Not that that’s necessarily bad, just that it seems a bit rushed, and means that the new characters aren’t even quite the ones we’d been following throughout the story. I’m also curious about how the Shah mentions that Lopperwomp has only three inhabitants, and two of them turn out to be enchanted. I wonder what the story is for the other one, the Old Stag. Sam Milazzo did the illustrations for the book, giving his interpretations of many John Dough characters as well as others.

Dorothy of Oz Prequel, by Denton J. Tipton and Blair Shedd – This was released to promote the CGI film Legends of Oz: Dorothy’s Return, which obviously hadn’t yet had its title finalized at the time. Reading it after seeing the movie (years after, in fact) makes it clear that there really isn’t anything particularly significant there that isn’t addressed in the film itself. It tells how the Jester came to power, and how the Scarecrow, Tin Woodman, and Cowardly Lion built the Rainbow Mover that they used to bring Dorothy back to Oz. Why they necessarily need Dorothy isn’t explained. Wiser, Marshall Mallow, and the China Princess all make appearances. There are also a few elements that weren’t in the film, like the cursed Gamekeeper incident from Roger Baum’s book and an encounter with the Fighting Trees. Candy County (Candy Country in the book) is said to be located in the Valley of Bonbons, which is the name of one of the valleys in Merryland. Additional appeal comes in covers drawn by Eric Shanower. Like the movie itself, it’s slight, but pretty fun.

Cthulhu Invades Oz, by Travis Gibb, et al. – This graphic novel by multiple artists is a crossover between the worlds of L. Frank Baum and H.P. Lovecraft. The former is obviously one of my favorites, but I’ll admit I could never really get into Lovecraft. And it’s not even because of the racism, but that I find his style hard to read. He had some interesting creations, though, and the idea of mixing two such disparate properties is bound to be fascinating. It’s not even the first time it’s been done, as Phyllis Ann Karr wrote a story called “The Eldritch Horror of Oz,” although that was more of a parody in many ways. In this new work, the Great Old One learns about Oz from Dorothy and invades it with his minions. The inhabitants make a valiant stand against the invaders, but ultimately fail, although the experience does change Cthulhu. While there are some clear MGM references, including a story featuring the Lollipop Guild, the creators definitely show some familiarity with books beyond the first. There are appearances by Fuddles, Flutterbudgets, Rigmaroles, the Frogman, the Shaggy Man, and Ozga. There are some new recurring characters in a swarm of bees who rebuild broken things.

Vampires and Oz, by Nikki Kay Richardson – This is also the name of the narrator and protagonist of the story, so I suspect it’s not the author’s real name, but I don’t know who actually wrote it. It’s an interesting take on vampire mythology, featuring a vampire born into a normal human family who desires to be good and helpful. She attends historical events, runs afoul of self-righteous killers, and offers opinions on how the media portray her kind. It’s interesting that, in this take, vampires can change into a greater variety of forms than just bats and sometimes wolves. Partway through, the book changes focus to Vookey Volcano, a lemonade-drinking vampire from Egor’s Funhouse, which shows up from time to time in Chris Dulabone’s Oz books. He’s explained to have been switched with Nikki at birth, so he was raised by vampire parents who are upset that he lacks the usual powers. There’s plenty of bigotry, often of the violent sort, in both the human and undead communities. It’s a weird mix in that it combines serious issues with corny humor, but I think it works pretty well. What’s disappointing is how minor the Oz content is. While Oz is mentioned from time to time, nobody actually visits it until close to the end. There is, however, a guest appearance by two other Dulabone characters, Lunarr Bernstein and his girlfriend Maureen.

2 Responses to Ostriches and Old Ones and Vampires, Oh My!