Shake Out the Sillies 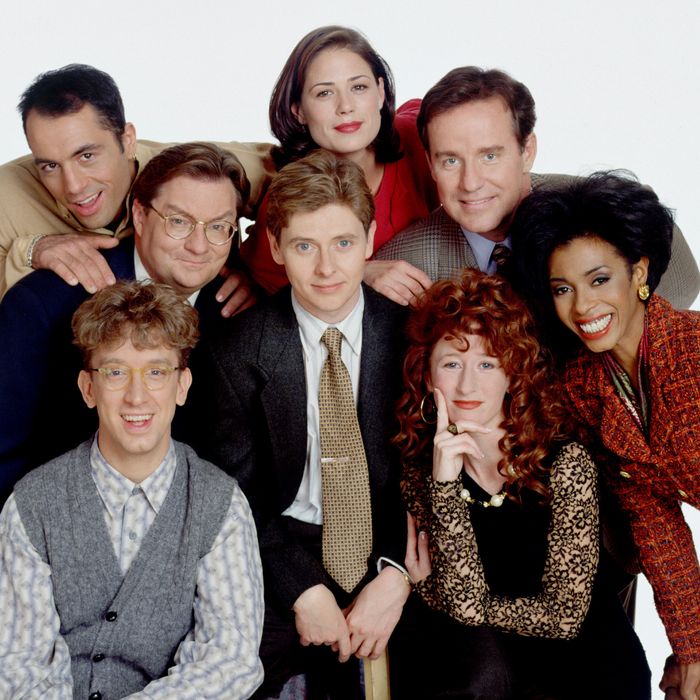 NewsRadio – This was a show Beth (my wife, not Vicki Lewis’ character) watched when it was current, and she quotes it a lot in her day-to-day life, so now I actually know what she’s referencing. There’s overlap with Kids in the Hall fandom, which makes sense as Dave Foley was in both. It’s absurd comedy, not fantastically absurd (the space and Titanic episodes notwithstanding, as they were clearly outside continuity), but still. I’m sure there are categories of absurdity, but I’m not going to look that up right now. It’s also sarcastic and witty, which I guess makes sense for a show from the nineties. A lot of the humor is based around bizarre dialogue, but there are other sorts of jokes as well. Beth has mentioned liking that it’s not sentimental; the characters generally don’t learn lessons, and there aren’t any Very Special Episodes. On the other hand, it’s not exceptionally mean, either. The characters usually get along and get things done, in a way that probably shouldn’t work but somehow does. I noticed that the characters’ main traits were established very early on, but there were still some changes and developments over time. Matthew was always the naive, clumsy guy, but it was more common early on to see him actually working. While we didn’t exactly watch the show straight through (there was some Brady Bunch and other stuff in between), it was in a short enough period that I noticed some seeming contradictions that I might not have normally. There’s an early episode where Jimmy James (Stephen Root) says Bill McNeal (Phil Hartman) is good at sniffing out frauds, then in the third season Halloween episode Bill freaks out when a phone psychic predicts his death. Also in the first season, Matthew helps Catherine get back at Bill for revealing her age on the air by giving her a copy of Bill’s birth certificate, while he later hero-worships Bill and probably wouldn’t have done anything like that. Dave started out as kind of an everyman, but was quickly fleshed out as a geeky guy with strange hobbies and a passion for classic television. Then, in the final season, he was really mean. The cast remained mostly constant, but Khandi Alexander left in the fourth season, allegedly because she wasn’t getting many good lines, which I can’t really argue with, she was underutilized. And of course Phil Hartman was murdered during the summer of 1999, so his friend Jon Lovitz took over in the fifth and final season as Max Louis, Bill’s replacement as on-air talent. He’d actually played two similar characters previously, all brash and neurotic guys. Reusing guest stars for multiple parts was something they did a few other times as well. David Cross appeared as one of Jimmy’s nephews, then later as an old friend of Dave’s. And Toby Huss played a security guard early on and a compulsive impostor in the last season (well, unless he was impersonating a guard the first time). It was late in the show’s run that they started having story arcs with recurring characters, notably the mom from Gilmore Girls as an efficiency expert who fires Matthew and shakes up everyone else, and Patrick Warburton as Jimmy’s equally strange rival Johnny Johnson. The ending of the fourth season seemed to suggest that Jimmy’s nephew (not David Cross, a different nephew) would stay on as part of the cast, but that didn’t happen. It was a great comic ensemble cast, but I’ve heard less than flattering things about some of the actors outside the show. I know Jon Lovitz blames Andy Dick for Phil’s death, and Lovitz himself famously criticized President Obama for not being nice enough to rich guys. I’m not even sure what’s up with Joe Rogan, but from what I’ve read he’s liberal on some issues, but thinks conservatives are being silenced, or something like that. So he’s like if Bill Maher knew martial arts? I don’t know. And I really don’t have much idea what Maura Tierney and Vicki Lewis are doing these days. NewsRadio still holds up despite that, however.