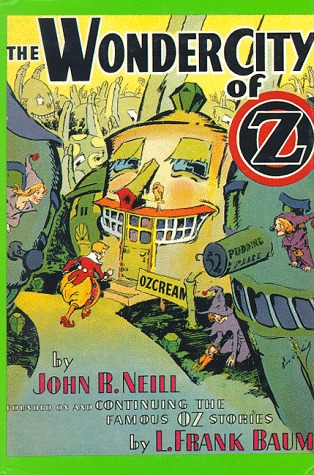 The Wonder City of Oz, by John R. Neill – After Ruth Plumly Thompson gave up writing Oz books, the publishers turned to the illustrator. I understand they’d been considering signing on Neill as the new writer before settling on Thompson, and I have to wonder how different things would have been if that had happened. Anyway, as Mari Ness pointed out in her review, Neill’s books were much more nonsensical than Baum’s or Thompson’s, and this is the wackiest of all. In this book alone, there are fighting houses, shoes that sing and play instruments, a boy throwing his hat in the air and flying up with it (well, hey, Marvel’s Thor does that sort of thing), a disembodied voice having its own personality, the Wizard of Oz dressing in costumes for no apparent reason, and Jellia Jamb crying candy tears and talking out of her ear.

It’s not that Baum or Thompson didn’t include similarly strange ideas in their books, but here they’re all in a short period and apparently not at all unusual. It makes the generally pleasant-sounding capital of Oz seem downright violent and dangerous. The houses smash each other, sponge creatures eat everybody’s shoes on a moonless night, chocolate soldiers from the sky invade the city, and a bunch of wild animals run loose.

Even Scraps has somehow picked up an odd obsession with trying to box everyone she runs into.

That said, there aren’t too many consequences to any of this. Some of this can probably be blamed on the fact that there are essentially two writers involved. Neill’s original manuscript wasn’t that good, so an editor heavily rewrote it before publication, allegedly without Neill’s consent or input. I don’t know exactly how much was changed, but based on the analysis of people who have read the original manuscript (I think there are actually two in existence, neither of them complete; but I’m not totally sure of this), the election and Jenny Jump‘s lobotomy weren’t Neill’s ideas at all, and they make so little sense that I don’t think they improve things. The ozlection plot does tie together incidents that were presumably originally unconnected, but they also switch around the order. I have to wonder if Jenny’s character development makes more sense in the original, as there’s really no rhyme or reason to it in the published book. I do enjoy some passages that I think were written by the editor (in that they involve the ozlection and aren’t illustrated), particularly the invasion of the amusingly creepy Heelers. On the other hand, there’s some pretty choppy writing that I don’t recall from the other Neill books, but I’ll have to double-check that when I next reread those.

I do really quite like Jenny and Number Nine as characters, although their relationship here is weird. He’s hopelessly infatuated with her, and she’s abusive to him. From what I remember, it’s much less disturbing in the next two books. Jenny’s fairy powers have sort of a superhero element to them, as she’s given extra abilities and/or senses in various parts of her body (in a G-rated way). There’s also a lot of exaggeration; fairyland or not, I highly doubt that the sign for Jenny’s style shop is “the biggest sign there ever was in Oz,” or that the Wogglebug’s book has over a million pages. And I believe that does continue in Neill’s other Oz books, at least to some extent. Also present in all of Neill’s books is an obsession with putting “Oz” into words, something Baum did occasionally and Thompson more often, but neither did to anywhere near the same extent.

One interesting thing about the style of this book is how it picks up where Thompson left off, not in the sense that it’s what she would have written, but that it has much the same energy as Ozoplaning, and appears to borrow elements from there. Whether it was Neill, the editor, or both (probably the latter) doing this, we have Jellia as a fairly significant character, the Soldier with Green Whiskers being comically arrogant, the Wizard using sci-fi devices, and a trip in an Ozoplane to a hostile country in the sky.

Neill doesn’t use that many Thompson characters; but Sir Hokus (drawn as his old self, not the youthened Yellow Knight), Kabumpo, and Captain Salt all show up.

A bear drawn on the endpapers and labeled “Sniffer” might be intended to be Snufferbux from Ojo, but he doesn’t appear in the story. Aunt Em and Uncle Henry appear quite a bit in the book, while they were relegated to mere mentions in Thompson. Glinda shows up, but doesn’t really do anything. I do give credit to Neill for developing the Emerald City itself, as he gives the streets names and appears to have some sense of its layout.

I’m not sure why Jack Pumpkinhead seems to live inside the city now, though. David Maxine suggested that it could be a second home for him closer to his father. I’d say it doesn’t affect the plot much to say it was just a mistake, but there hardly even IS a plot to this book.

3 Responses to Jump Into Cha-Oz