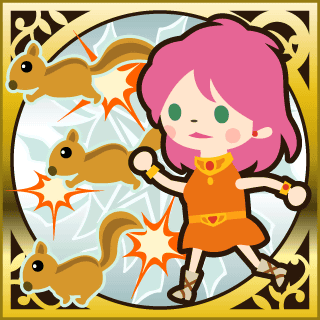 I saw a squirrel in a graveyard last weekend. That’s not really that strange, as Green-Wood Cemetery is also an arboretum, so it gets a lot of wildlife.

Still, a squirrel around gravestones made me think of the Skull Eaters from Final Fantasy. 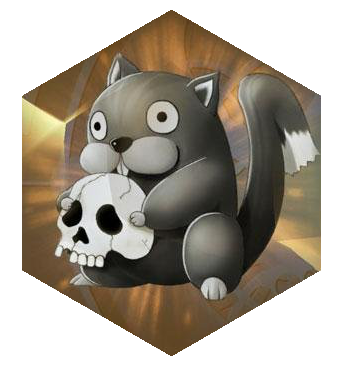 Introduced in Final Fantasy V, they’re related to the Nutkin, a fairly harmless enemy that doesn’t even annoy you with riddles.

Maybe that’s only for owls.

Anyway, the Skull Eater is a surprisingly dangerous rodent found in a cave. It has only one hit point, but they’re very difficult to hit, and can spawn others of their kind when attacked with magic. The enemy’s incisor attack never misses, and not only is it frequently a one-hit kill, but it also poisons the victim. They’re also prone to eat and run. I guess people don’t usually think of squirrels as dangerous, since they’re small and cute, but even real squirrels can bite and scratch.

The Squirrel King is the main antagonist in “Jack Pumpkinhead and the Sawhorse,” one of the Little Wizard Stories of Oz. He captures some children who ate the nuts the children had gathered, and the titular characters have to rescue them. They DID have to work to collect those nuts, but the squirrels also laugh when Jack’s head is broken.

I know he can (and does) get a new head, but that picture is still disturbing
Bill Campbell and Irwin Terry reuse the Squirrel King as a villain in The Lavender Bear of Oz, and there he has a magic eight-ball that actually works.

Getting back to Final Fantasy, FF6 doesn’t have the Nutkin or Skull Eater enemies, but it does have a Nutkin Suit that Strago or Relm can wear. 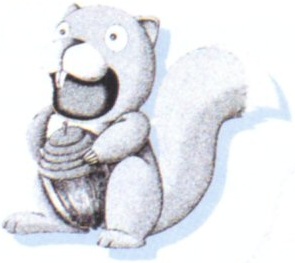 And Kaori Tanaka, the guy who originally designed Sabin, said the martial artist was bitten by a squirrel in his youth and still has a fear of them. He must hate that suit. This game introduces another squirrel-type monster, the fairly harmless Mu. 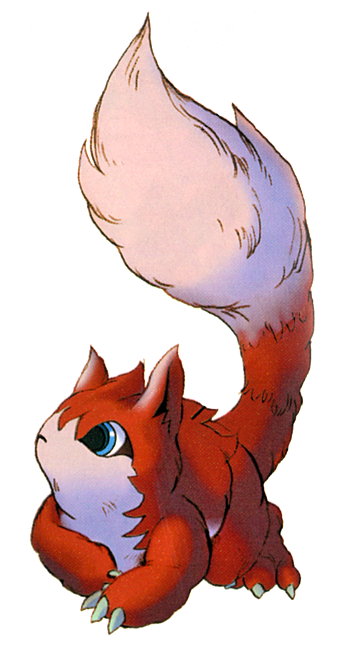 In FF9, there’s a friendly Mu who will give you AP in exchange for an ore. 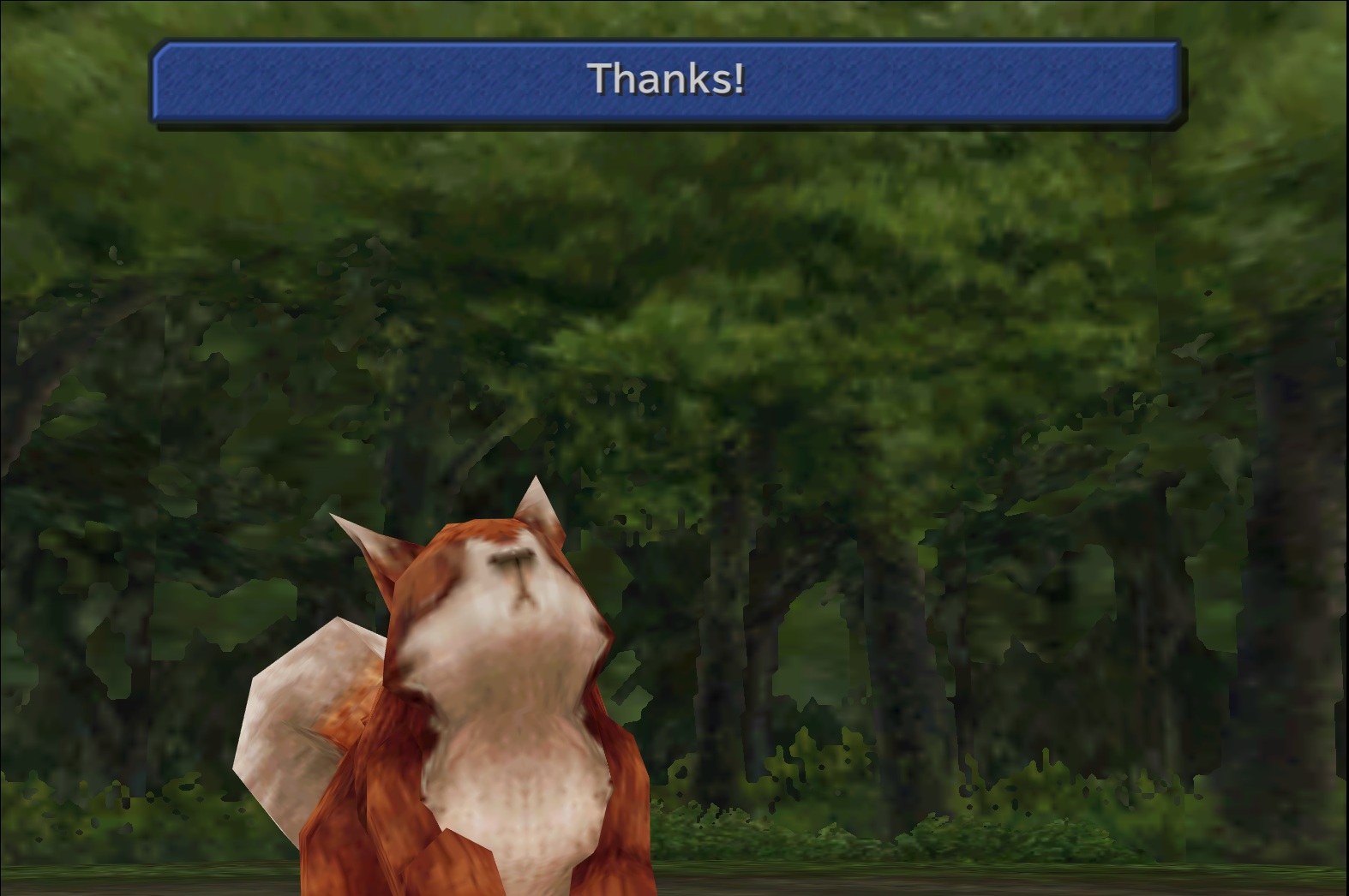 Why a squirrel wants ore, I’m not sure. It’s similar to a nut, but much less edible. I’m not sure where that name comes from; the Final Fantasy Wiki mentions the lost continent of Mu, but I can’t see what the connection would be. Maybe “mu” is supposed to be the sound it makes? 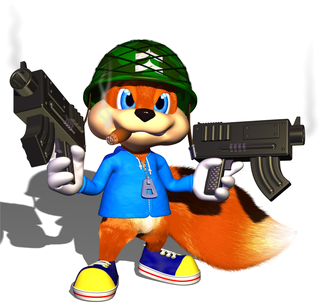 I looked a bit into other video game squirrels, and it looks like the most prominent one is Conker, whom I know very little about. Created by Rare, he was introduced as a cheerful cartoon squirrel. But when an early game was dismissed as another kiddie platformer, they made him an alcoholic and added a lot of raunchy and edgy elements to what became Conker’s Bad Fur Day, where, among other things, he fights Nazi teddy bears and a giant singing turd.

He actually first appeared in Diddy Kong Racing, which potentially makes him part of the Mario universe. 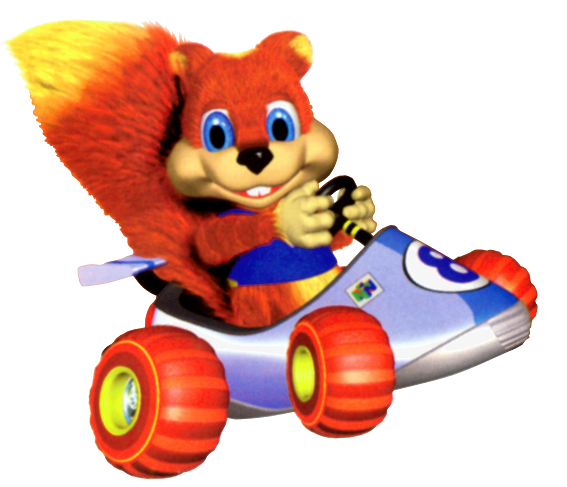 I suppose Mario and Luigi face toilet clogs as part of their day job, but I assume most of them don’t sing. 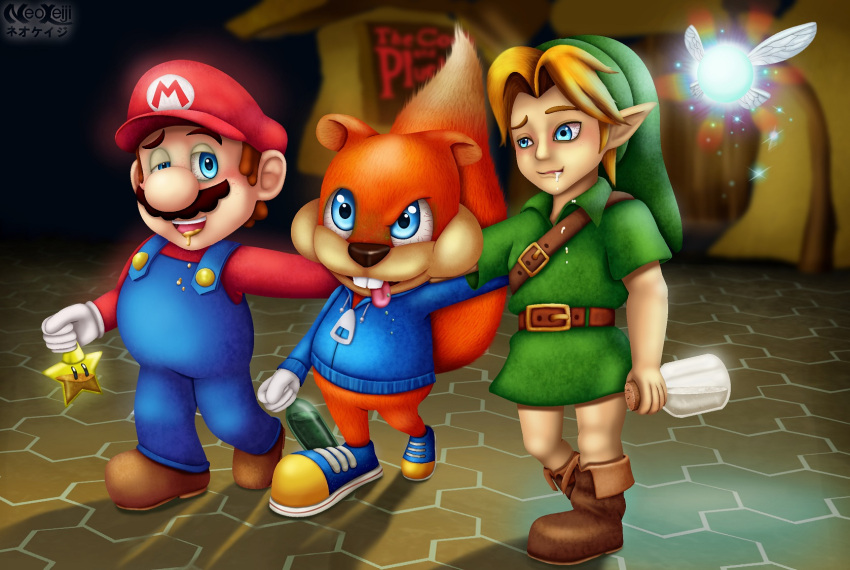 Picture source
In the 2007 DS remake of DKR, Conker and Banjo were replaced with Dixie and Tiny Kong due to rights issues. According to this list on Wikipedia, there’s also a squirrel character in Donkey Kong Jungle Beat, a friendly fellow named Flurl whom DK can use as a parachute.

The flight-granting power-up in New Super Mario Bros. U is an acorn that turns Mario and his companions into flying squirrels. 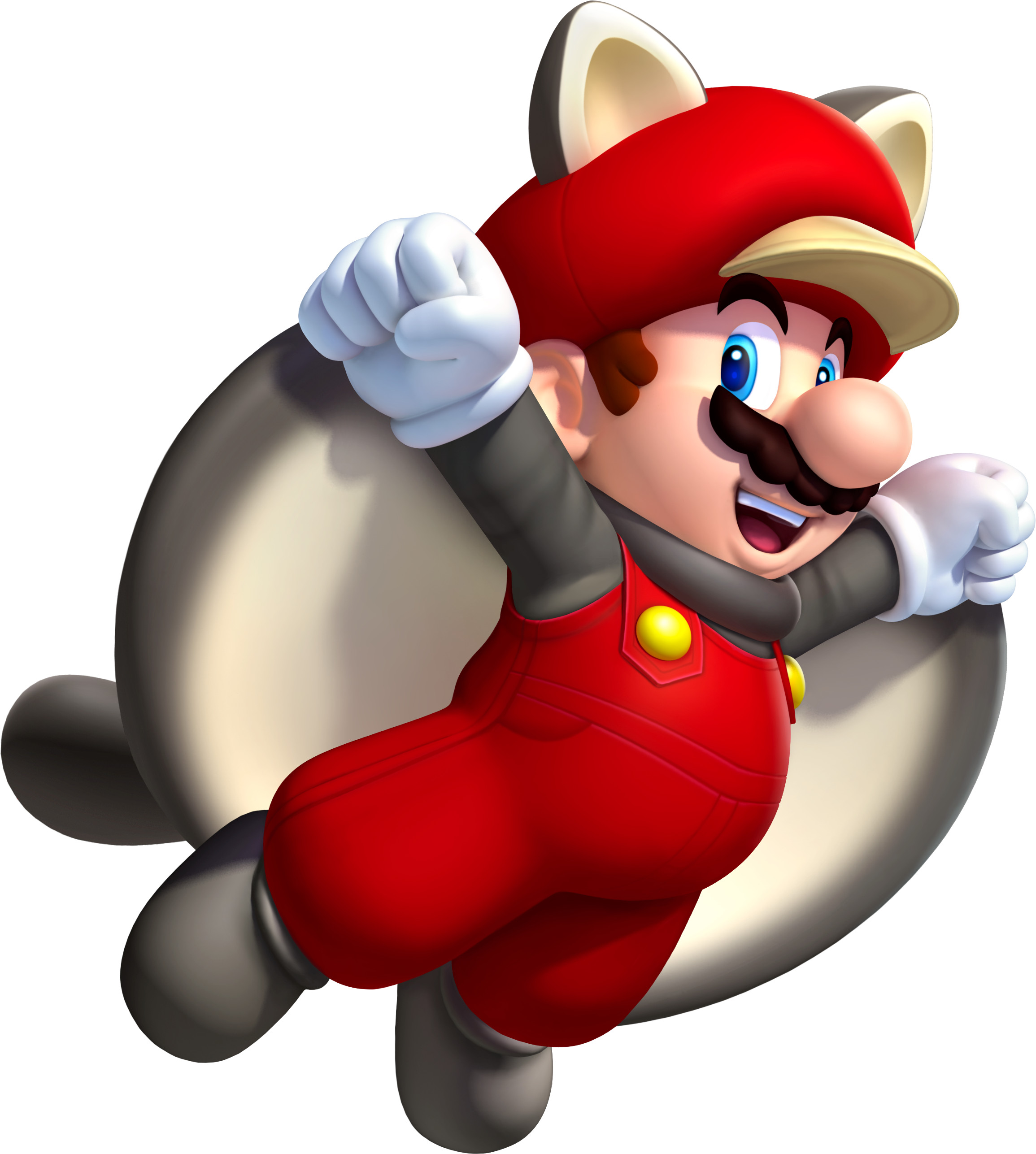 Ray the Flying Squirrel is a playable character and ally of Sonic’s in the 1993 arcade game SegaSonic the Hedgehog. 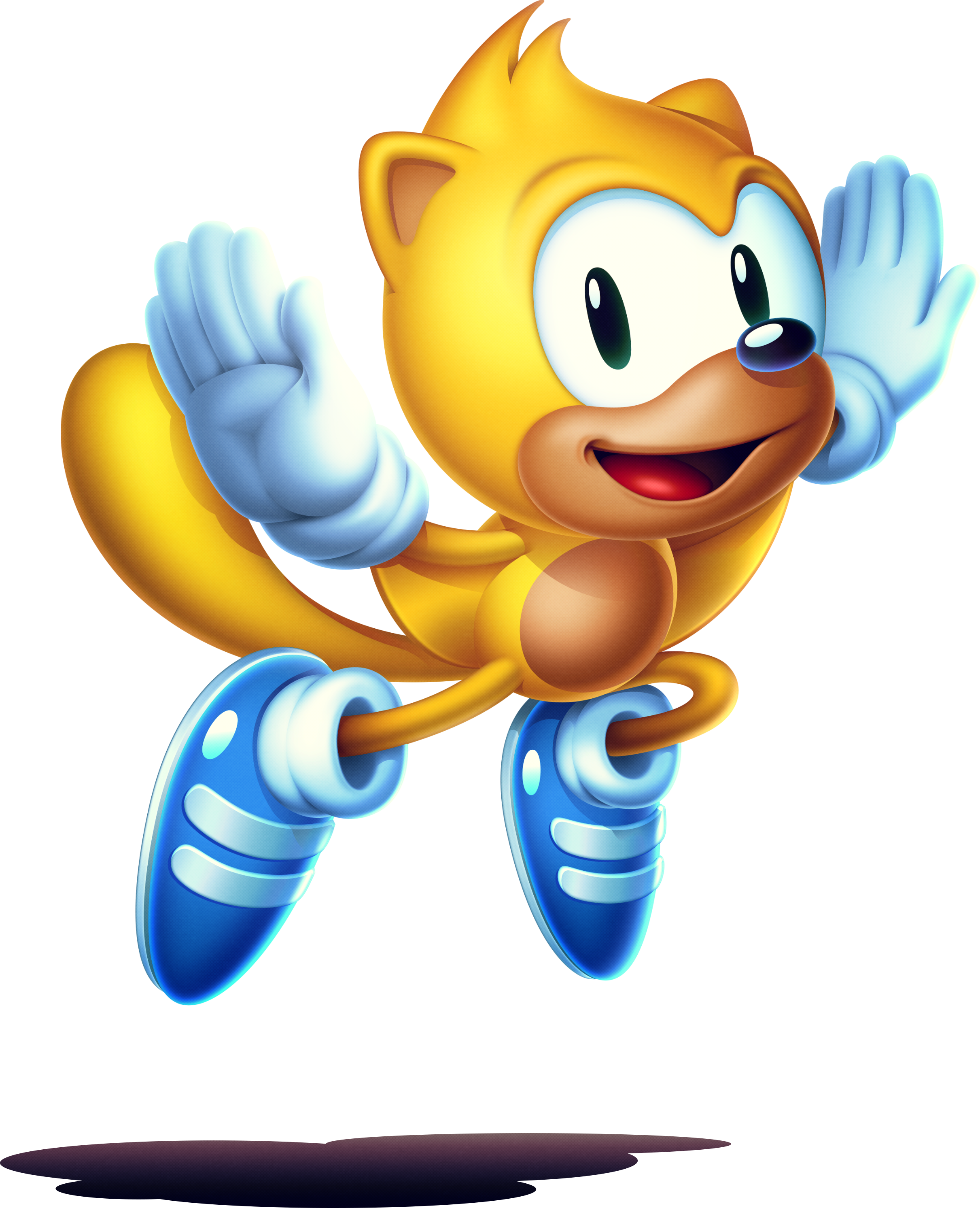 Squirrels are among the animals Sonic rescues back in the first game, and in the Saturday morning Sonic cartoon and Archie Comics, there’s a squirrel ruler of the Acorn Kingdom who was deposed by Dr. Robotnik. His name in the comics was originally Maximillian, but after some strife with the writer who came up with that name, it was changed to Colin. 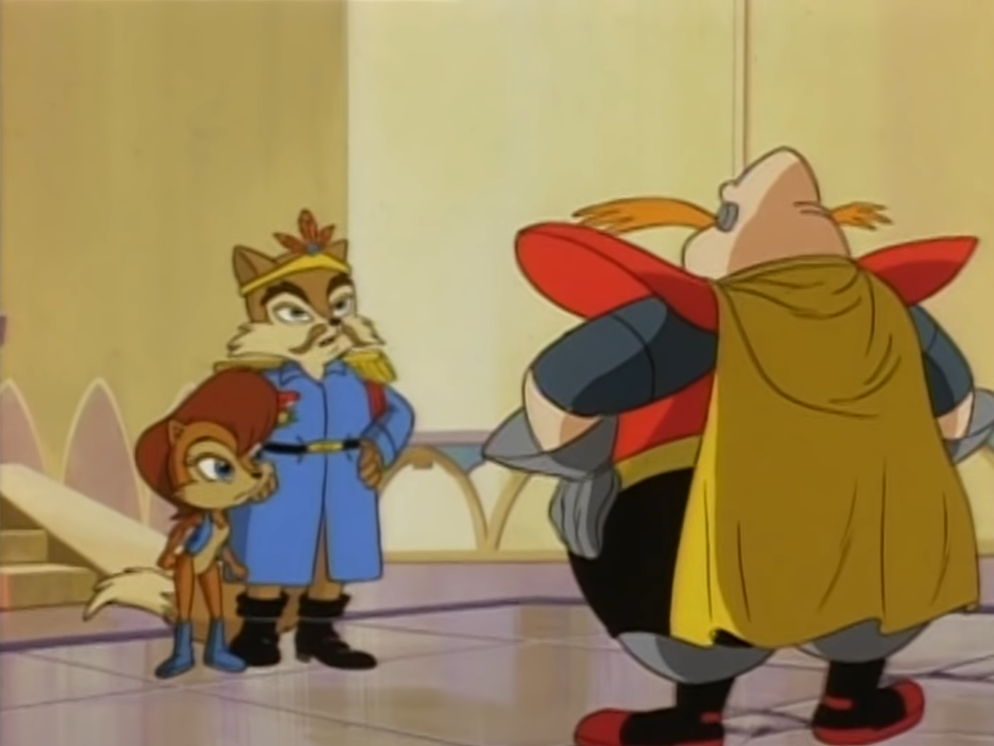 His daughter Sally is a friend of the hedgehog’s and member of the Freedom Fighters, but she’s generally identified as a chipmunk. Technically, I guess she’s a squirrel/chipmunk hybrid, not something that occurs in real life, even though both animals are in the same family (taxonomic family, that is). But hey, if Donald Duck’s family tree can include geese, swans, grebes, coots, and loons, then why not? Conker’s girlfriend is (was?) also a chipmunk, who is somehow bigger than he is.

I haven’t played Dragon Quest of the Stars, one of several DQ games made for cell phones, but your guide in that one is a pink squirrel-like creature called Cyril. 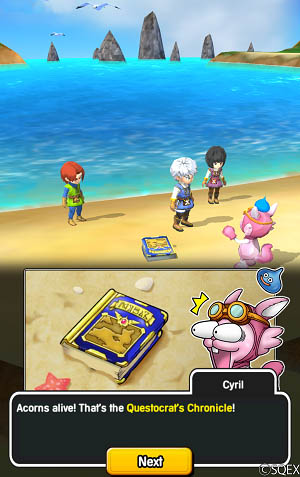