The Ecosystem of Yggdrasil

A comment on my post about video game squirrels mentioned Ratatosk (or Ratatoskr, probably a more accurate transliteration, but not how I originally knew it), the squirrel from Norse mythology. He’s a red squirrel who runs up and down the World Tree Yggdrasil, spreading scurrilous gossip. Apparently the call of a red squirrel, particularly when in distress, is very piercing, the kind of thing humans might interpret as insults. The name might possibly mean “drill-tooth,” “rat-tooth,” or “climber tusk.” I’d somehow gotten the idea that he brought food to Odin while he was hanging on the tree, which would make sense, but what I’ve read recently indicates that he didn’t eat anything during his sacrifice, and indeed might not eat at all. A few sites compare Ratatosk to another squirrel, Miko from the legends of the Wabanaki Confederacy, a group of Eastern Algonquin tribes in Maine and eastern Canada. Miko was originally the size of a bear, and was so destructive that the hero Glooscap decided to shrink him down, as part of a process of modifying different animals. Even in his current small size, however, he remains a bad-tempered troublemaker. Ratatosk does appear in some video games, the ones I’m familiar with being the 2018 God of War that crosses over with Norse mythology, and the adventure game Heroine’s Quest. 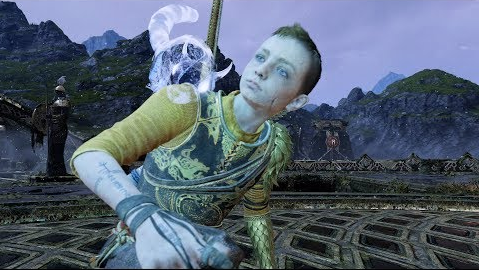 I haven’t played any of the GoW games, but I looked a bit into the lore before. I tried to play Heroine’s Quest, but froze to death. Well, technically, the character I was playing froze to death.

In Final Fantasy XIV, the name is used for a dragon. 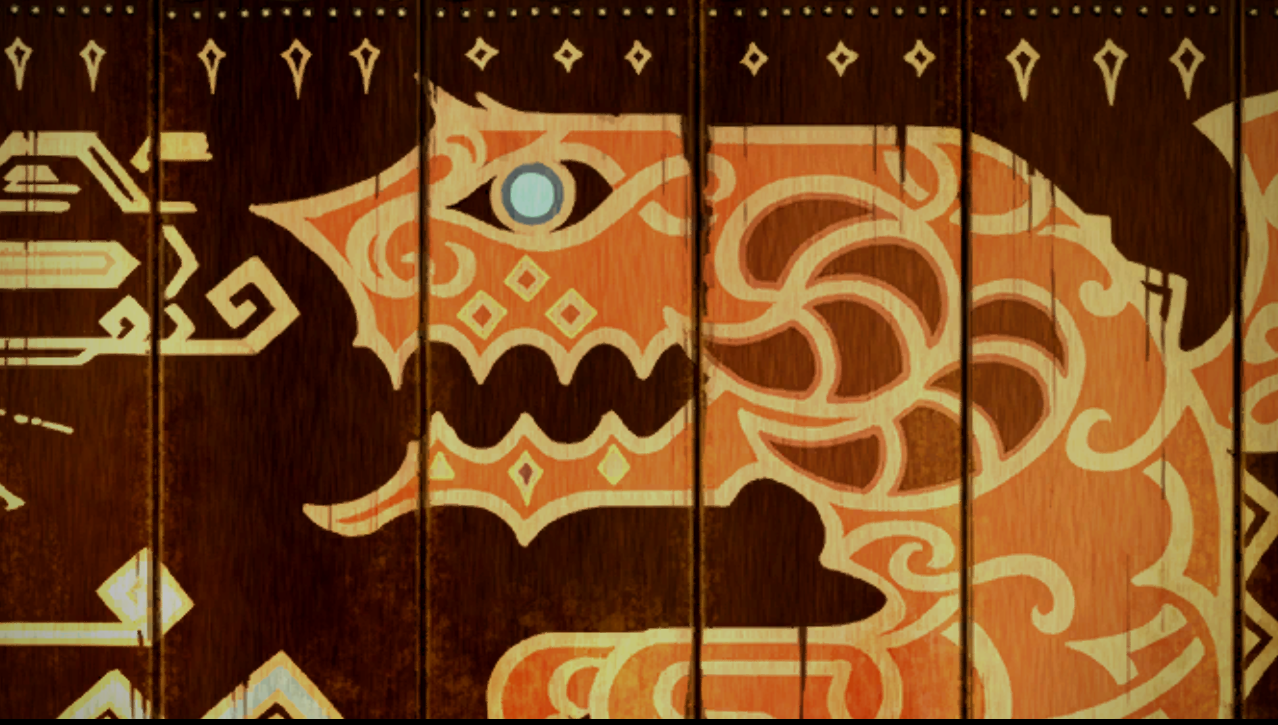 Ratatosk also shows up in the Squirrel Girl comic, which makes sense as the Marvel universe already incorporates Norse cosmology.

There are other animals associated with Yggdrasil as well, although there isn’t a lot of detail available on most of them. I guess it makes sense that, if the universe is represented with a tree, there would be animals there, because they’re in and around real trees. Indeed, cosmologies that include animals tend to have several, like the world turtle with elephants on its back, or the fish with the world-supporting bull on top. 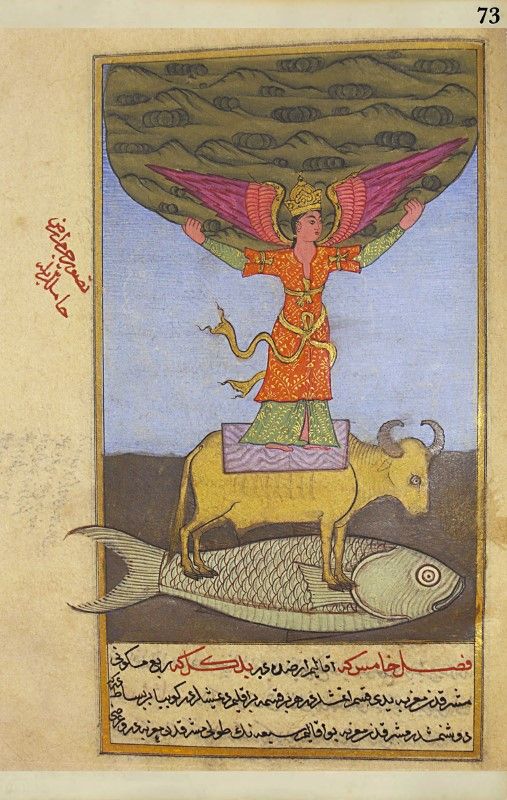 In the branches of Yggdrasil lives a wise eagle with a hawk named Vedrfolnir perched between its eyes. The eagle itself has no name that we know of, which is strange for a mythology where everything has a name. Even the drill Odin used to steal the mead of poetry is named Rati, which has sometimes been associated with Ratatosk. The hawk is only mentioned in Snorri Sturluson‘s Prose Edda, so maybe there was only one bird before that. The relative size of the birds suggests the eagle is of enormous size, which would work for an animal living in a tree that encompasses the entire world. I don’t know that the size of the other animals is specified, though. It would make a certain amount of sense for a squirrel who constantly runs up and down a planet-sized tree to be proportionally big. It’s said to take Odin nine days to ride down to Niflheim, and that’s on an eight-legged horse. Still, it also sounds like Ratatosk has a lot of free time on his paws. I guess this is a universe where the Jotun are sometimes described as big enough for people to mistake their gloves as buildings, and sometimes not much bigger than humans. And there is a Jotun named Hraesvelgr who takes the form of an eagle and produces wind by flapping his wings, so these could be the same eagle. On the other end of Ratatosk’s path is Nidhogg, a dragon who lives in the underworld of Niflheim, specifically on Nastrond (meaning “Corpse Shore”) and spends most of his time gnawing on a root of the World Tree. 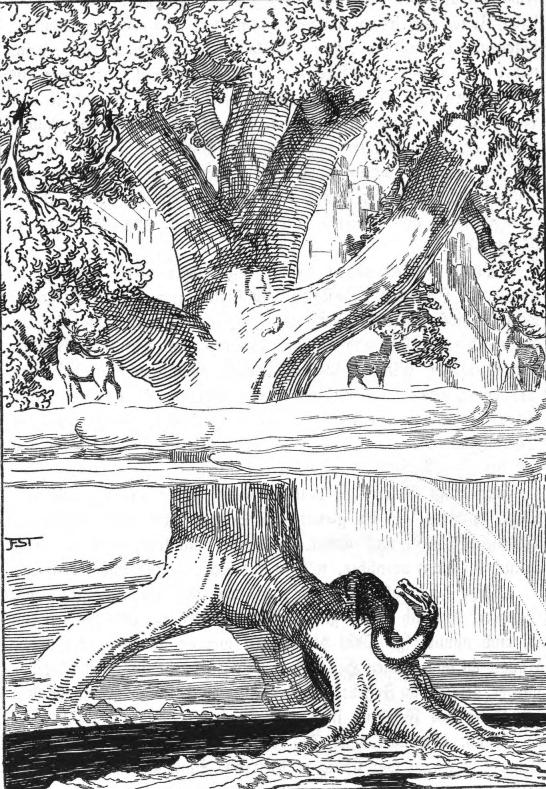 One interpretation is that the root is blocking Nidhogg’s access to the world above. The serpent is also said to eat the corpses of the worst of the dead, murderers, adulterers, and oath breakers. I suppose the root by itself doesn’t give him all the nutrients he needs. Anyway, by creating strife between the eagle and the dragon, who never meet face-to-face, the squirrel is sowing chaos for some reason. It’s also sometimes said that Ratatosk himself gnaws on the tree. If Yggdrasil is where he lives, why would he want it to be gradually destroyed? Did he not think this through? But that sense of futility is common in Norse mythology. 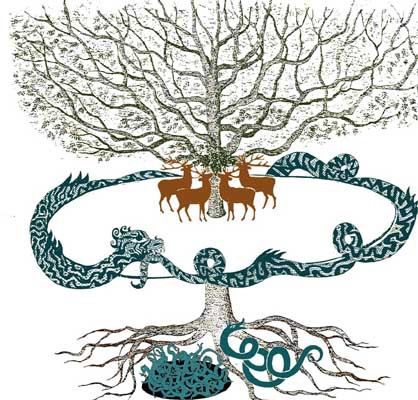 Four stags, named Dainn, Dvalinn, Duneyrr, and Durathror, are said to eat from the branches of Yggdrasil, further causing slight damage to the tree over time. Dain and Dvalin, by the way, are also names of Dwarves. Also living on the foliage is a goat named Heidrun. Actually, it’s not clear that the tree where the goat lives is the same as Yggdrasil, but I’m including her anyway. 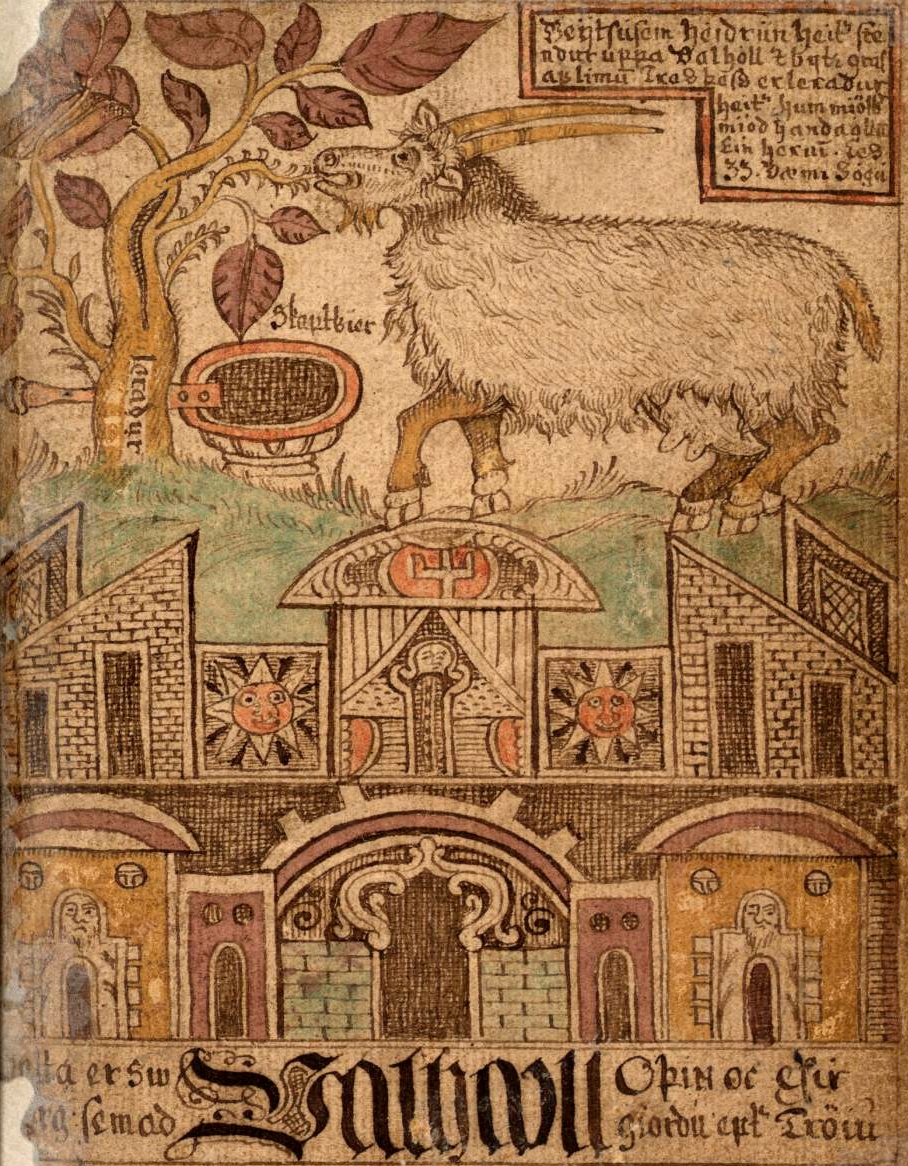 She produces mead instead of milk, which provides a constant supply to the inhabitants of Valhalla. While the tree is said to be resistant to fire and iron, it’s described as having a rotting trunk as well as all the other slow means of destruction, and pretty much everything decays in Norse mythology. Still, while it’s said that Yggdrasil shaking will signify the end of the world, it’s also said that the two humans who will repopulate the world will survive Ragnarok by hiding inside it. But then, a dead tree could still provide shelter.

3 Responses to The Ecosystem of Yggdrasil