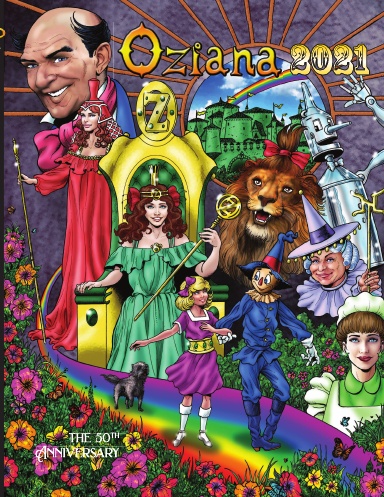 The 2021 issue of Oziana, the fiftieth anniversary edition of the publication, has been released, and I’m in it quite a bit. I’m flattered, but I kind of wonder if my stuff wouldn’t have been better off spaced out somewhat. Oh, well. It’s not like I’ve been published anywhere else. And while I’m credited as co-author of the second part of “The Wizards of Silver and Gold in Oz,” and it started with a story I wrote years ago, this section contains mostly Joe’s ideas. As such, I’m not sure why Psychopompus is helping the enemies of Oz or who Feah really is, although perhaps I’m the only one particularly concerned with that. The name of Satan’s Hollow seems a little out of place for Oz, but then I’m the one who wrote “The Uplift of Iblis” with a character loosely based on the Devil in Islamic legend. For what it’s worth, there was an arcade shoot-’em-up game called Satan’s Hollow back in 1982. I wrote a rough draft of the account of Sir Hokus and the Grand Gheewizard’s visit to Tititi-Hoochoo’s country, but I’d forgotten that Ozma specifically says here that she can’t send people there by magic, so I guess I’ll have to change the beginning. “The Butter Lamb of Oz” combines a few different ideas I’d wanted to expand upon in my Oz writing, starting with the Eastern European tradition of making lambs out of butter for Easter, then adding in other stuff that I could relate to that. I have a version of this one with some edits done by Joe, but this wasn’t the one Marcus Mebes received. Does this one being published make it the definitive version? David Valentin’s illustration for this story can be found in color on the back cover. Laura DeNooyer’s “A Week with Mr. Baum” is fanfiction about L. Frank Baum himself rather than his creations, telling the story of a girl with overly strict parents learning from the author at Macatawa. I don’t know how accurate the portrayal of Baum is, but the writer of the tale did incorporate a good amount of research. The 2020 issue has a story about Baum meeting a sea captain at the Hotel Del Coronado, and there’s a review in the Winter 2020 Baum Bugle of a book that tells a fictionalized version of Maud Baum’s life, so I guess this is becoming more of a thing. “Heartless,” by Templeton Moss, is a more detailed retelling of the Tin Woodman’s back story and relationship with Nimmie Amee. This story is told differently in The Wonderful Wizard of Oz and The Tin Woodman of Oz, the former saying that Nimmie’s employer was a woman who paid the Wicked Witch of the East for help, and the latter that she actually was the WWE. Moss’s solution is that they were both witches, but the WWE much more powerful. My interpretation is that the WWE was living incognito, so Nick Chopper didn’t realize they were one and the same until later. I’m not sure how the two sheep and the cow would fit into this. Isn’t trading sentient animals essentially slavery anyway? “Christmas, Toys, and Oz” is another holiday story of mine, this time focused on trying to harmonize the different characterizations of Santa Claus in Baum’s and Ruth Plumly Thompson’s writing. I’m not sure how well I succeeded, but I hope people will enjoy my account of the meeting of Captain Santa, Captain Salt, and Captain Cooky. Mitchell Mayle is the illustrator for this one. Mebes’ “Buckethead in Oz” is a tribute to Chris Dulabone, writer and publisher of many new Oz books, who died last year. It makes a lot of inside references, and incorporates the character of Bumble the Clown from Jane Albright’s “Billy Bumble in Oz,” which itself is about a fictionalized version of Oz fan and illustrator Bill Eubank. And I know Chris had mentioned Buckethead as a character in at least one of his own books. This is followed by memories of Chris by Mebes, Sam Milazzo, Nate Barlow, Eric Gjovaag, Marin Xiques, Tyler Jones, and Chris’s brother Dana. Finally, L. Frank’s great-grandson Robert A. Baum contributes “The Trunk in the Attic…”, about a magic chest that can reproduce invaluable documents from the elder Baum’s life. The cover is by Alejandro Garcia, paying tribute to W.W. Denslow, John R. Neill, and Eric Shanower.