Theater of the Oblivious 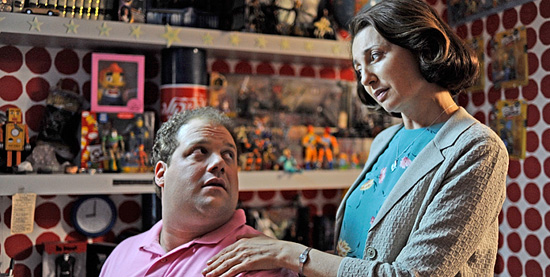 Dark Horse – This movie is awkward and uncomfortable, but I guess that’s pretty much always the case with Todd Solondz’ work. It focuses on a pathetic man-child who lives with his wealthy parents, played by Christopher Walken and Mia Farrow. He works at his dad’s company, but mostly just seems to show up and goof around. He collects toys, has a lot of trouble with social cues, and is prone to tantrums and combative behavior with others. This guy meets a woman at a wedding, and she tries to shake him off, but he persists. She later finds herself so depressed that she goes ahead with dating him, despite being really awkward around each other. The movie is confusing in that he has a vivid imagination, and it’s not always clear what’s real, although there are often clues in his dreams that things aren’t quite right. He frequently dreams about his dad’s secretary, who’s sympathetic to him and does a lot of his work, showing up out of nowhere and giving him advice. When it starts to get really weird, with pretty much every other character criticizing him, it turns out he’s been in a coma for a while. While he blames other people for his problems in his waking life, his dreams reveal that he inwardly sees himself as lazy and mean. It’s never really discussed what actual mental condition he might have; I know from experience that social awkwardness and feelings of being overwhelmed by pretty much everything can be pretty damaging even if life gives you advantages in other ways. I’ve read reviews that point out how this was at least partially a satire of movies from the time when immature men were basically cured due to a relationship, because here he just drags the woman down with him. 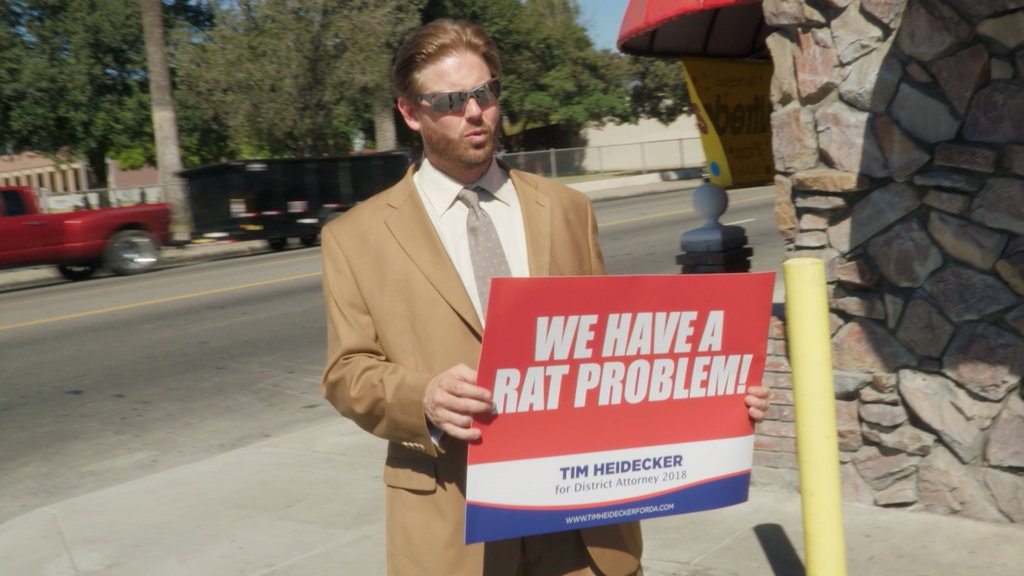 Mister America – This is a tie-in to On Cinema, which started out as a podcast and then became an online video show with Tim Heidecker and Gregg Turkington (who’s also known for his Neil Hamburger character) reviewing movies rather cluelessly. Beth has watched a fair amount of the show, but since she often did so while I was looking at something else or trying to get to sleep, I’ve mostly just heard it. It became more darkly satirical over time, with Tim revealing himself to be prone to anger, abusive to his co-workers, and susceptible to conspiracy theories. In one arc, he has a kid with an exchange student, who then dies because he refuses to get him vaccinated and keeps using treatments prescribed by a quack. Prior to this film, he holds an electronic music festival where he distributes vapes made by the same quack, resulting in twenty deaths. Even though he avoids punishment due to a hung jury, he still wants revenge on the prosecutor, and runs for District Attorney of San Bernadino County despite not being a lawyer or a county resident. The movie is an an in-universe documentary about his desperate campaign, using a lot of people who aren’t professional actors. Gregg does a few bits where the film crew interviews him about Tim, but he always tries to segue into talking incessantly about movies. Originally not planned as a feature film, it expanded into one as it was being made. That said, despite its occasional more universal satirical elements, I don’t think it would work as a stand-alone.

Vamp – Beth had seen this 1986 film when she was a kid, but didn’t remember much about it. She had thought there was a fingernail-scraping scene in it, but there wasn’t, unless that was cut from the DVD release or something. It features Grace Jones, who isn’t in it all that much, but is the highlight as the artistic and bizarrely fashionable leader of a vampire strip club.

I really don’t know much about her, but I definitely remember her coming out of a box and singing “The Little Drummer Boy” while doing a robotic dance in the Pee-wee’s Playhouse Christmas special. (By the way, the main writer on that special was John Paragon, who just recently died.) The plot focuses on two college students trying to find a stripper to get into a fraternity, and they go to a dive bar with Gedde Watanabe. He doesn’t do a goofy accent here; he’s just a dorky guy who has money but is desperate for companionship. It has some funny lines and scenes, but overall it’s kind of slow, a lot of it just consisting of the one guy running away from the vampires. I’m also not entirely sure what the purpose was of some of the characters, like the pale-skinned gang leader, the little vampire girl who attacks him, and the bartender who longs for the old days. There’s also a girl who’s new at the club and knows one of the students from a party when they were kids, but he doesn’t remember her. She’s played by Michelle Pfeiffer’s sister.

Helvetica – Beth put this on the Netflix queue a long time ago, probably when it was relatively new. I have to admit that a lot of it went over my head, as I don’t really have the mind for typography or graphic design, although I have experimented with various fonts in Microsoft Word. I did find it interesting how many things Helvetica is used for, although I can’t recall ever using it. It does succeed at being clean and clear. While not mentioned in the film, it came to my mind that it was Swiss, and therefore neutral. There were also some critics of the overuse and dullness of the font. There was one guy, a modernist, who was pointing out how bad old magazine ads with wacky fonts and colors were; but I thought they were a lot more eye-catching. Fonts aren’t that big a deal for me, except for the ones that are noticeable off-putting.

3 Responses to Theater of the Oblivious