The Sins of Silver Island 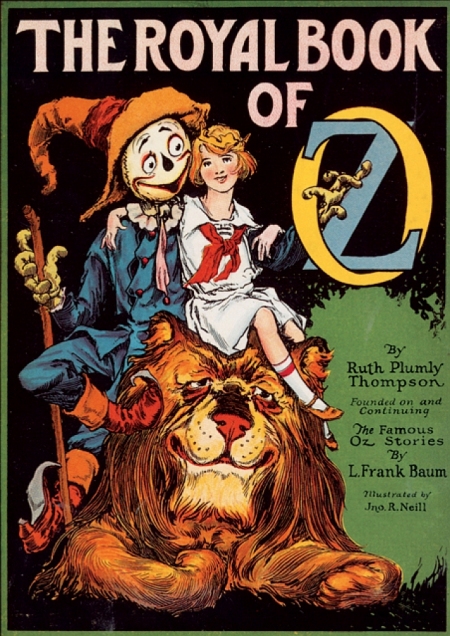 The Royal Book of Oz, by Ruth Plumly Thompson – I’d gotten into the habit a few years ago of starting to reread the hundredth-anniversary Oz book around L. Frank Baum’s birthday, 15 May. Since the last one was published in 1920, however, this is now a Thompson book, but I kept up the pattern even though her birthday is in July. Some materials, including Who’s Who in Oz, claim that she was born in 1900, but it was actually 1891. There was also a fiction by the editors that Royal Book was based on notes by Baum, but it wasn’t. I’ve heard that Thompson refused to have her Oz books edited, not that Reilly & Lee did all that much in that department anyway. She improved as a writer over her tenure as Royal Historian of Oz, but she always had a sense of whimsy and fun. This story starts with the Wogglebug deciding to write about the genealogy of the Ozian celebrities, with the Scarecrow feeling left out because he doesn’t know his origins.

Of course, a lot of famous Ozites don’t really have ancestries as such, but the book kind of glosses over that by mostly just having them respond to the bug with jokes. The Patchwork Girl and Glass Cat know who made them and brought them to life, but don’t seem to consider the Pipts their parents. Jack thinks of Ozma, who made him but didn’t animate him, as his parent. It seems like the Scarecrow could claim the farmer who made him as his father, but he doesn’t, even though this is the only official book in which he actually has lines.

In a search for his family tree, he finds out the beanpole where Dorothy found him is actually the top of a magic beanstalk that leads to the Silver Island, a sort of Chinese fairyland where the Scarecrow is regarded as the reincarnation of the Emperor. The treatment of the Silver Islanders people is rather insensitive, and the pictures are worse. I think part of why she went with the Chinese theme is that it’s presented as kind of the opposite of Oz, hierarchical, unimaginative, and obsessed with tedious ritual, whether or not there’s any fairness to this association. I suspect there was also influence from Gilbert and Sullivan’s The Mikado, which was set in Japan, but Western media often combine the two. I have to wonder if the Scarecrow blowing away an invading fleet with a magic fan is a reference to the Kamikaze, the typhoon that protected Japan from the Mongols, or that was just a coincidence. For the most part, the Silver Island segments are kind of boring. The other plot involves Dorothy and the Cowardly Lion getting lost in a storm and visiting a few of the themed communities in the Winkie Country. The first one, Pokes, is a town where everyone moves slowly and just being there makes people (and lions) sleepy. Here, they find and rescue Sir Hokus, a knight from English romance who has a bit of Don Quixote to him in that he’s old and out of his element. They then come to Fix City, a place where the people barely move at all (perhaps a little too close to Pokes to appear in the same book), instead letting their furniture and accessories move around. There are also encounters with a giant made of candy, the brothers Memo and Randum, and the Comfortable Camel and Doubtful Dromedary. Thompson seems to have been in a bit of a rush to wrap things up. Dorothy and company magically transport themselves to the Silver Island, find themselves suddenly able to understand the language with no explanation, stop the plot to turn the Scarecrow back into a human, return to Oz, and speed along back to the Emerald City when Hokus grows a beanstalk in his back.

I totally understand having trouble with endings, but streamlining the whole thing might have been something an editor could have helped with. And some simple proofreading could have caught weird inconsistencies like whether it’s the Silver Island, singular, or Islands, plural (maybe it’s one big island with several small ones around it?), and whether the King of Fix City is named Fix Sit or Fix It. While Baum wasn’t always the most careful writer either, it seems like he was more likely to contradict things between books, while Thompson would write herself into a corner within a single narrative and then come up with a lazy solution. In fairness to both of them, it wasn’t quite as easy to revise texts back then as it is now. I could understand someone not liking this book, both because of the casual racism and the general sloppiness, but I had already read and enjoyed some of her other books before this one, and was interested to learn how she’d gotten started with the franchise.

1 Response to The Sins of Silver Island