In light of my recent post about dragons in the Mario series, which addresses the confusion between those and dinosaurs, I find it interesting that the franchise has two separate creatures based on the Loch Ness Monster. The first one, Dorrie, is introduced in Super Mario 64, identified by a sign as a friendly water dragon. And this Dorrie is indeed found, specifically by Mario in a lake in the Hazy Maze Cave beneath Peach’s castle. Based on a plesiosaur, a prehistoric marine reptile that isn’t a dinosaur but often gets lumped in with them, his design is simple and cute, but still a little intimidating. 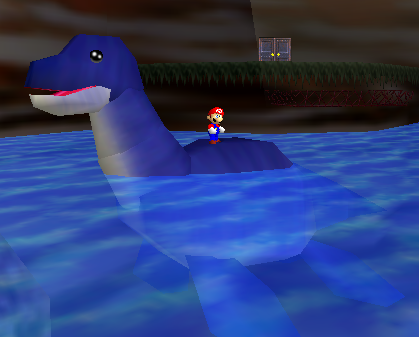 Mario can control Dorrie to an extent by jumping on him, causing him to change direction or raise or lower his neck. When he reappears in Super Mario 64 DS, the designers continued the trend that started with Cheep Cheeps in Super Mario World of something that should be naturally able to see underwater wearing goggles. He also looks more like a Yoshi. I saw a rumor online that the original, less humanized design scared kids, but I don’t know how true this is. The sign DOES give the possibility that Dorrie might eat you, even though this can’t happen in the game. 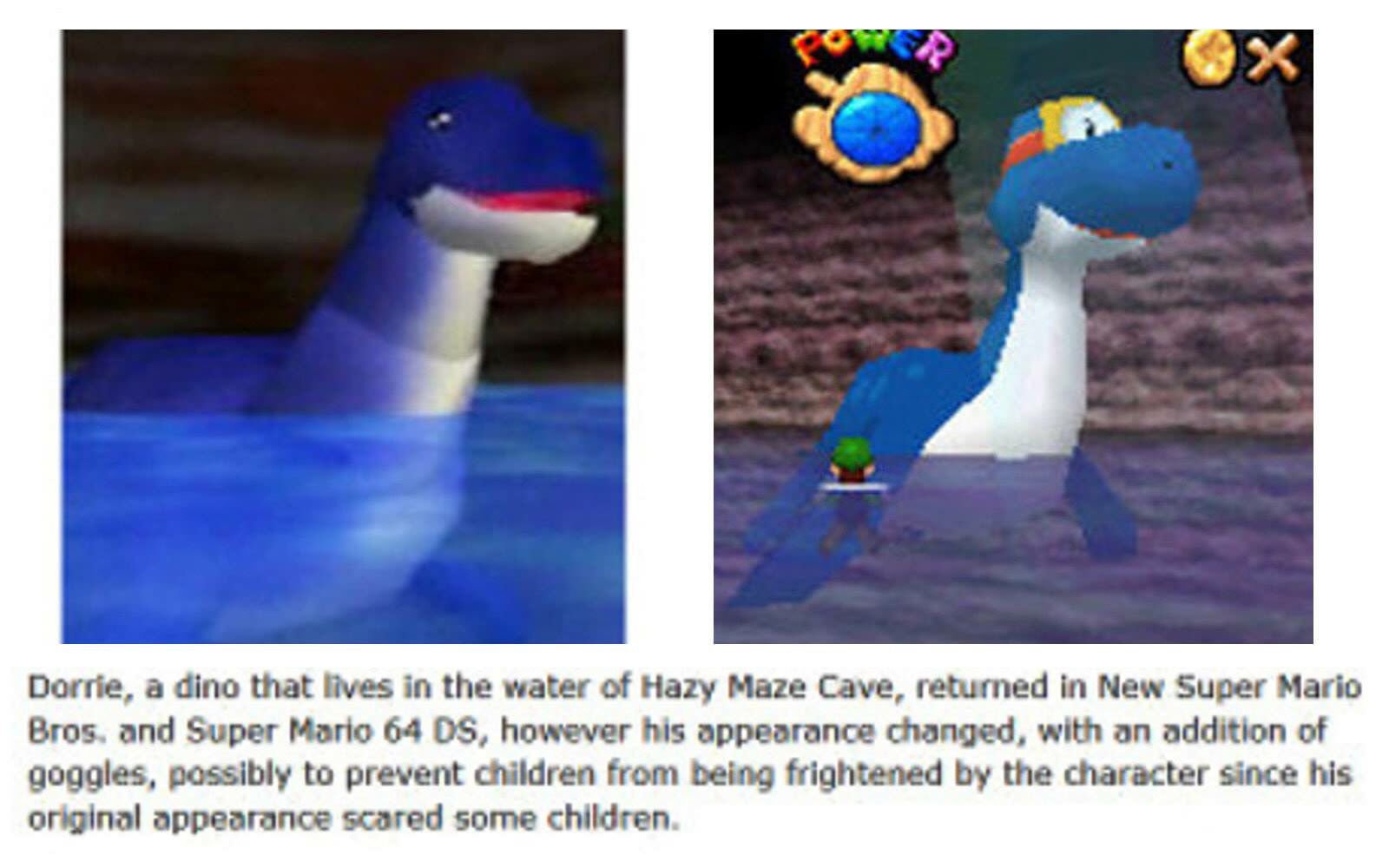 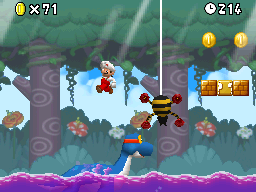 In addition, Dorrie appears, or is at least referenced, in several Mario Party games. MP Advance has a location called Loch Dorrie in Shroom City, where a Toad explorer called Mr. E discovers the animal and then runs away. He wants another dinosaur for a friend (despite the fact that, as discussed, he’s not a dinosaur), and Yoshi can choose to accept.

There are several Dorries in Super Mario Odyssey, many of them working for Crazy Cap and wearing hats to match. 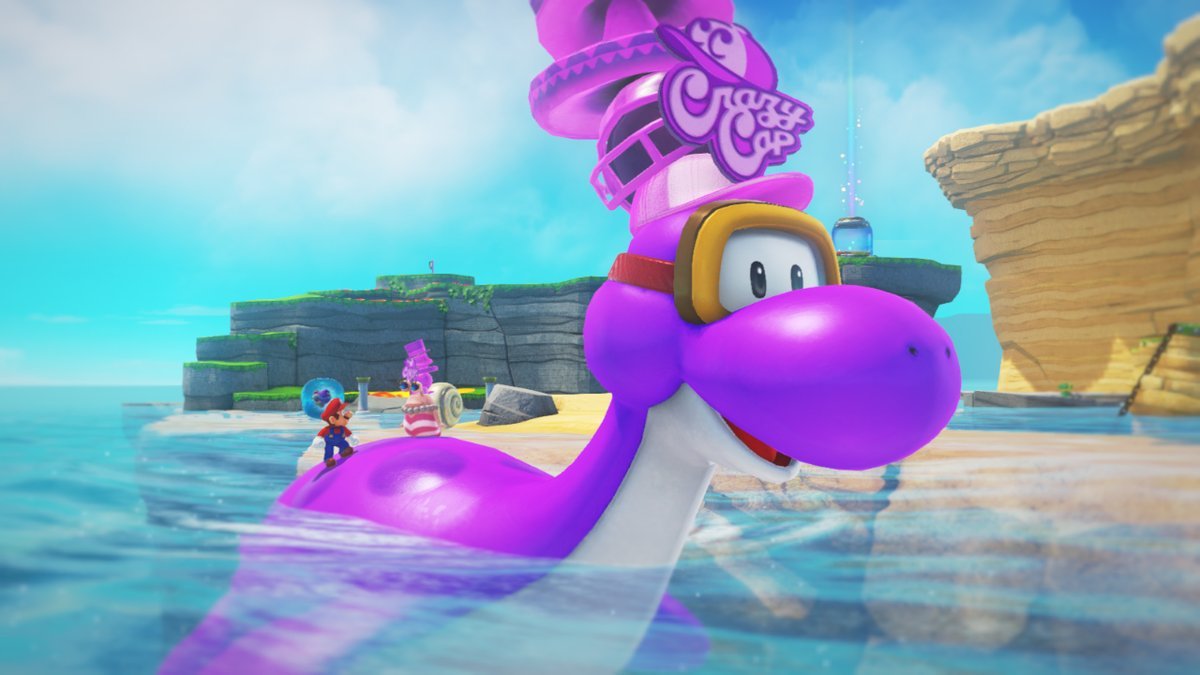 They speak in moans made up entirely of vowels, but these are translated for the player’s benefit.

I generally used “he” in this paragraph because the sign in 64 does, but there are specific references to the reptile as “she” as well, and Dorrie is more commonly a woman’s name in this country. I assume there are some of both sexes, but as with other characters in the franchise who are named after their species, it’s not always clear how often we’re seeing the original Dorrie from 64. 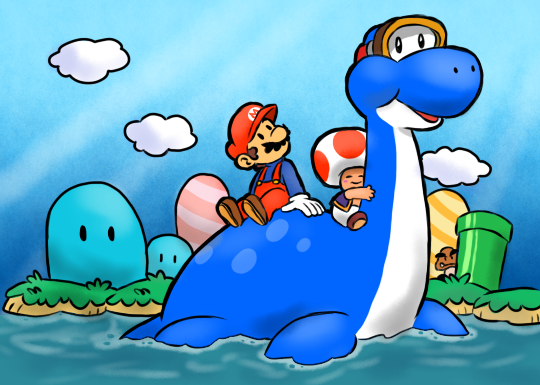 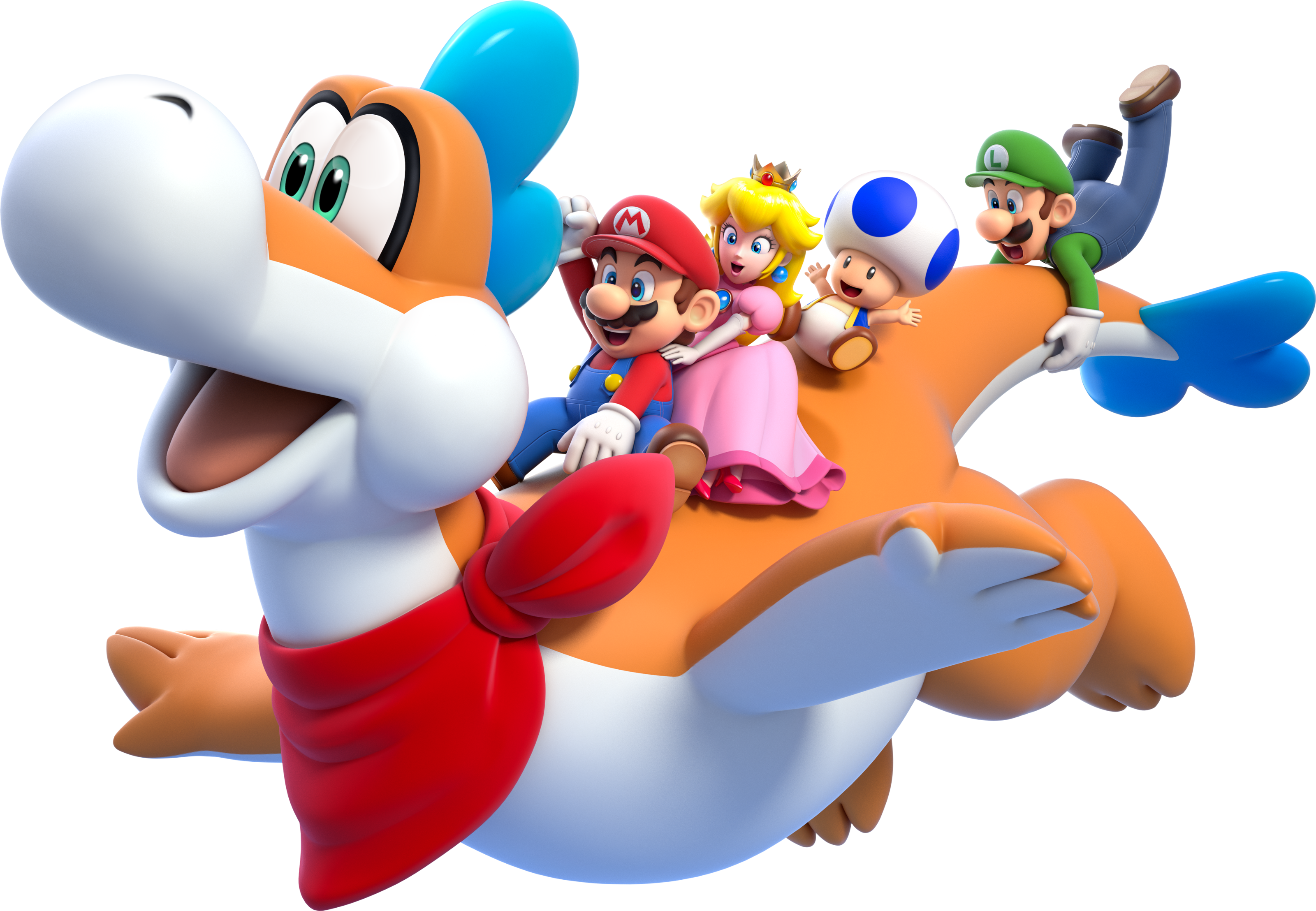 Hang on, Luigi!
While the name is a combination of “Nessie” and “plesiosaur” (and not, I hope, a reference to Jim Crow laws), it actually more resembles a nothosaurus, a much older species from which plesiosaurs evolved.

The name means “false lizard,” and they had webbed feet. This is also the case with Plessie, who’s there to help Mario and company traverse waterfalls and other such areas, but can also move around on land. 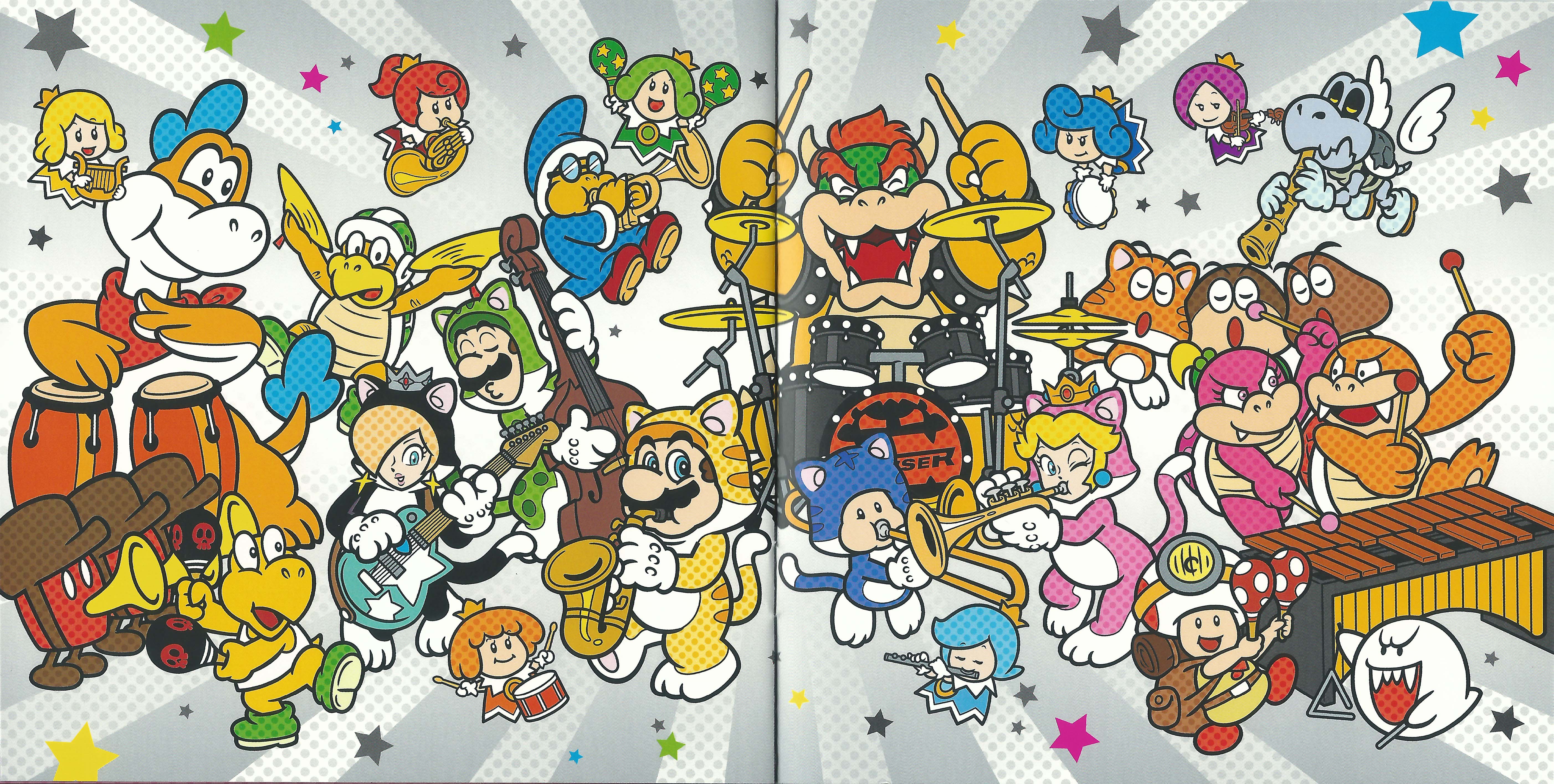 And play the bongos.
It wears a bandana, which must get awfully wet when it’s submerged. And in Bowser’s Fury, Plessie can obtain cat powers. 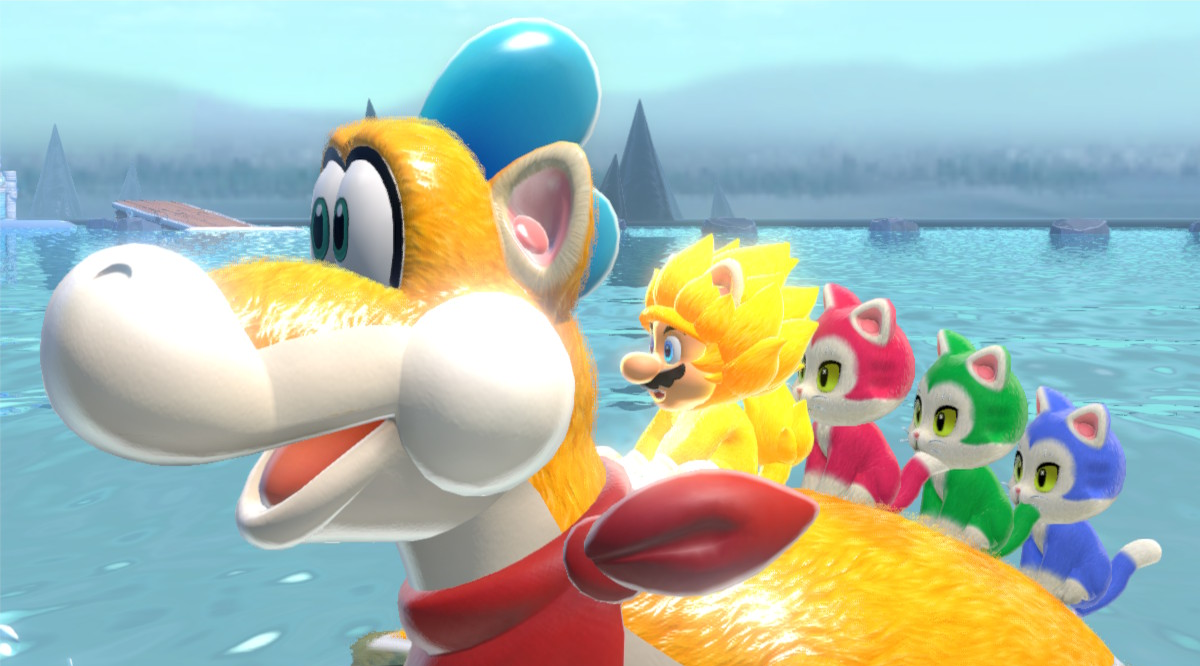 Those are some very Disney-esque kittens.

1 Response to Please Plesiosaur Me