It’s a Small Video World After All

One thing you might have noticed about video games that ostensibly show the entire world is that these worlds are really small. That’s not too surprising, especially in earlier games with limited space, but it still raises some questions. The standard role-playing game tends to have a small number of towns surrounded by huge swaths of wilderness.

The towns themselves have hardly any people, and businesses are strictly geared toward what the player might need.

Pictured: The sprawling capital of the Kingdom of Alefgard
There have certainly been some improvements in this respect over time. For instance, Dragon Quest III has a day-night cycle and townspeople are often in different places at different times of day. Shops will close and their owners will go home. This usually only requires each person to have one new position and line of dialogue, but it lends verisimilitude. Even in DQ1, there’s a guy in Cantlin selling radishes.

You can’t buy radishes, but it does indicate that not everything merchants sell is related to battle. If you could buy them, I suspect they’d just be healing items. Come to think of it, are medical herbs really that impressive when you can get the same basic effect from eating an apple or something? I guess that’s why they’re so cheap. Sometimes games even show farms, mines, or other places people obtain resources, usually when they play a role in the plot. Still, the distribution of goods must be difficult with monsters all over. Maybe that’s why merchants sometimes journey with armed warriors. 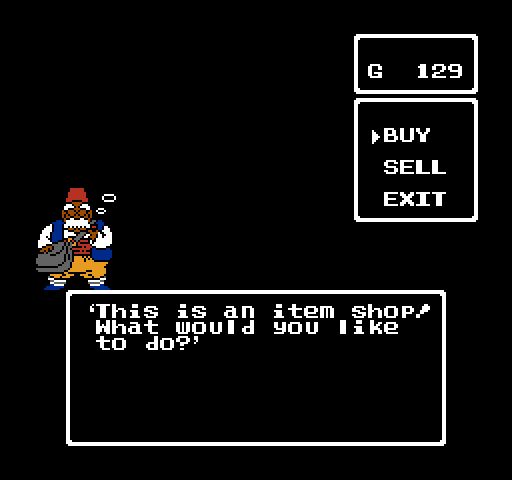 Maybe the presence of monsters means each town has to be self-sufficient, but sometimes there are indications that there is interaction between them. You just don’t generally see it in the course of the gameplay.

I’m mostly thinking of role-playing and adventure games here, but someone on the Marioverse Discord tried to work out the size of Mario’s world based on the distance between Bonneton and Fossil Falls in Super Mario Odyssey, and the place appears to be really small, like a radius of 141 kilometers for the entire planet. I tend to doubt this was done intentionally by the developers. It is worth noting that you don’t explore the entire world in the game, only specific places that you reach by airship. This map makes New Donk City look only slightly bigger than Brecconary.
Apparently the Japanese for each area basically meant “country,” but they’re kingdoms in English, even though they don’t seem to have rulers. Is Pauline in charge of the entire Metro Kingdom, for instance?

Still not as big as Coruscant, I guess, but still pretty impressive.
Anytime you move around on an overworld map, it’s obviously not to scale, and you’re only getting a sample of what’s actually there and no indication as to actual distances. What I have to wonder, partially due to how DQ2 lets you visit the kingdom from the first game but only access four locations, is whether what you see in the game is all there is, or you’re supposed to assume other people and settlements exist but are glossed over because they aren’t relevant. This is a bit trickier in games where you do see pretty much everything to scale, like DQ11. But even there I don’t think you can rely all that heavily on relative sprite sizes. People have come up with some really clever ways of measuring areas in games, but is what we see an accurate representation of what would be there if it were real? As you’ve probably gathered, I like consistency in fiction. But then, how many different layouts have we seen for Peach’s Castle and Toad Town? There’s probably stuff it’s better not to see even if the memory allowed for it, like how the characters use the bathroom (although that didn’t stop them from including a bunch of toilets in Breath of Fire II). A town of 1000 people would be more realistic, but it would make the game tedious, unless it’s one of those massive multiplayer things that I’ve never tried. The political situation can also be confusing.

In DQ2, there are five kingdoms with rulers: Alefgard, Midenhall, Cannock, Moonbrooke, and Dirkandor. Hargon has presumably taken over the country of Rendarak. But who rules Beran, Rippleport, Slewse, Burrowell, or Zahan? Chrono Trigger has so few locations that they had to create a whole new archipelago when they revisited the world in Chrono Cross.

This is obviously because you’re visiting multiple times, but still, is Guardia the only country of any significance in the world from 600 through 1000 AD? Even the Mystics, who give Guardia a run for its money in 600, don’t seem to control much territory. Porre becomes an independent military power before the events of Chrono Cross, but in 1000 the mayor seems to be the only government. I guess a lot of it remains up to the player’s imagination.