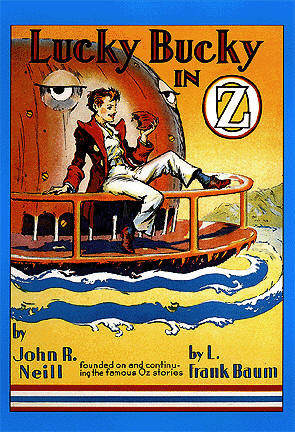 Lucky Bucky in Oz, by John R. Neill – I was thinking that maybe I should save this one for its eightieth anniversary next year, but I decided to go ahead and reread it anyway. It’s my favorite of the Neill Oz books (well, the ones published by Reilly & Lee, anyway), and the first one of his I read. In fact, I think it might have been only the second non-Baum Oz book I read, after Ruth Plumly Thompson’s The Cowardly Lion of Oz (so the least bizarre Neill and the most bizarre Thompson, or at least close). I have fond memories of reading this in my grandparents’ house, and while it does contain some of the typical Neill weirdness, it actually has a plot. Not a particularly in-depth one, but still more than the previous two have. A lot of what I find appealing about this book is the character of Davy Jones, the wooden whale. He’s determined and loveable, and the pictures demonstrate his affability.

Davy journeys from the Nonestic Ocean to the Emerald City with the titular character, Bucky Jones, who is blown from his uncle’s tugboat in New York Harbor by a boiler explosion, and apparently doesn’t think about whether anyone else was hurt or killed. In addition to being lucky, he’s also resourceful and adaptable. I remember hearing a rumor that Neill asked Thompson for ideas for his books, and while I don’t know if that’s true, this one does kind of have a Thompsonian structure. A young boy befriends a big animal, they have to keep escaping from strange beings who want to trap them, and pirates are involved. J.L. Bell also pointed out before that it can be seen as a tall tale about a fish getting away (Davy is called a fish and a whale interchangeably, but I guess it’s okay since he lacks the organs and such anyway), which could help to explain away some of the inconsistencies and temporal anomalies, as well as explaining why we never really know much about Bucky’s feelings. Bucky and Davy are joined by the Gabooches, wind-blowing bellows birds who seem to also have human forms, although it’s not really clear.

There’s a subplot where Ozma and the Wizard of Oz, seeing the children of the Emerald City draw pictures to make fun of the Soldier with Green Whiskers, put them to work painting the walls of the palace. This seems reflective of the Roosevelt administration’s policies, and the celebrities all join in. Jack Pumpkinhead paints a surprisingly lifelike picture of Mombi, and she escapes from the wall, several other painted magicians joining her.

This ties into the main story somewhat when Mombi hides in Davy’s cabin, then after being discovered flies to the same volcano where Bucky arrived in fairyland; but really it’s mostly independent. Number Nine plays a fairly significant role as the Wizard’s assistant, and the Scarecrow and Tin Woodman accompany Bucky and Davy on the last leg of their journey.

There’s also an unplanned visit to Kaliko in the Nome Kingdom.

One bit of strangeness that appears is that the Wizard has actually removed some of the rivers in the Winkie Country, and when Davy drags a spare river along with him, it ends up running into the Emerald City. Or something like that, anyway; that part of the book is pretty confusing. Overall, though, it shows Neill clearly improving as a writer of Oz books. He’d only get to write one other before he died, however, and it wouldn’t be published for another sixty years. I’m rereading that one now, so I’ll have more on it in the near future.

1 Response to Oz High, Oz Low, A-Whaling We Will Go