Scraps on the Run 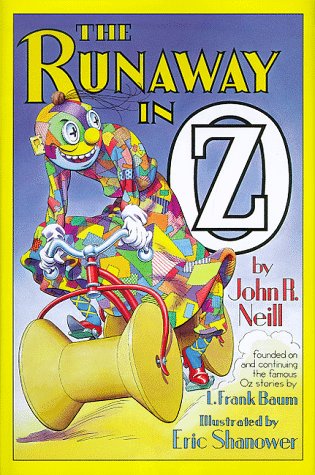 The Runaway in Oz, by John R. Neill – Before Neill’s death in 1943, he had completed a manuscript for this, his fourth Oz book. He hadn’t finished the illustrations, however, and that and other factors led to its not being published for another fifty years. There were some versions of the manuscript circulating before that, mostly ones with edits by Fred Meyer and Robert R. Pattrick, under the title A Runaway in Oz. I have a photocopied and stapled copy that was even further revised by Marcus Mebes. Finally, Books of Wonder published an official edition with consent from Neill’s daughters, with Eric Shanower as editor and illustrator. The story is about Scraps messing up the palace floors and generally annoying everyone right before a reception for some visiting Gillikin monarchs, so she runs away on her Spoolicle, a vehicle designed by Jack Pumpkinhead.

It’s interesting that Neill seems to have been purposely giving the generally simple Jack some hidden talents, as he’s building a pipe organ and conducting an orchestra (one comprised of shoes, but still) in Wonder City, has an uncanny painting ability in Lucky Bucky, and here designed a vehicle. There’s some precedent for it in a brief mention in Emerald City that Jack designed the Scarecrow’s home, but I don’t know whether Neill would have remembered that. Finding that everyone she wants to stay with expects her to take some responsibility, she seeks out the Weather Witch on her mountaintop, hoping to ride the wind outside Oz. (Sorry, Scraps, but I think most people in the rest of the world also expect that.) She meets along with the way with an incredibly strong Power Plant (sort of a mobile bush with a human-like face) named Popla, and her attraction to her new friend seems to go beyond the platonic, although they don’t like each other’s rhymes. An accident results in Scraps and Popla being blown into the sky instead, where they ride on a mechanical shooting star and befriend the Twinkler, then spend time in an air castle that the Wogglebug dreamed up for a vacation, but that the Patchwork Girl and the student Alexample unintentionally set loose.

Meanwhile, the Wogglebug, Jack, and Jenny Jump go looking for Scraps, but wind up in an enchanted orchard where a bunch of sour quinces have revolted.

While better plotted than Neill’s other Oz books, the stakes really aren’t that high for anyone. Scraps is the main protagonist, but she’s rude and reckless throughout most of the adventure. It would have been pretty simple to just have her learn responsibility, especially as she kind of does toward her new companions, but it’s downplayed. She does stop the quinces, but she isn’t trying to, and the sacrifice she makes (her patches are covered in gunk from smoke bombs) is only temporary. And other books have already shown that Scraps is perfectly capable of being serious when she needs to be, although less so than usual in the Neill books. The character who gets the most of the experience might be the Twinkler, who becomes a skilled cook, and he’s not even there for the conclusion. But it’s fun, and the book looks great.

2 Responses to Scraps on the Run