Shave and a Haircut, Two Squits

Jenny Jump might well be the foremost stylist in Oz, but there are other mentions of hairstyling being a thing in Oz even before her arrival, if perhaps less creative. There’s a pun in The Patchwork Girl of Oz when Bungle says Unc Nunkie needs a haircut, and Dr. Pipt replies that, while the forest he’s been living in “is a barbarous country, there are no barbers there.” For what it’s worth, the two words are not etymologically related; “barber” derives from the Latin for “beard,” while “barbarian” was a Greek insult that implied foreigners stutter, or at least that’s the common explanation. There’s a barber character in Ruth Plumly Thompson’s Hungry Tiger, a resident of Rash who is thrown to the Tiger for accidentally cutting the Pasha’s cheek while shaving him. As expected, the Tiger isn’t the sort to eat a person, and the barber escapes the country for Down Town with him and some others. He and a singer decide to stay there and make some money. There’s no illustration of this character as far as I know, but there is one accompanying his profile in Who’s Who in Oz. This picture is from Purple Prince, of Jinnicky‘s barber.

The Jinn’s Advizier, Alibabble, is constantly advising his master to get a haircut, and his response is to order his barber to cut Alibabble’s hair off and the head with it, although he later relents on the latter.

At this point, the Jinn is still a rather unpredictable character who makes casual threats that are PROBABLY jokes, but we don’t know for sure. The Advizier, however, apparently has been through this before and is totally unconcerned. The thing is, there’s no reason why this barber COULDN’T be the same as the one from Rash, although there’s nothing in the text of any of the three books to indicate that. I like the idea, though.

Karyl Carlson and Eric Gjovaag talked about their book, Queen Ann, at the most recent Virtual OzCon, and this one has a town of barbers. Eric’s original idea was to call it Seville, but then changed it to Barberville after Garberville in northern California. It’s a Thompson-inspired, pun-filled episode where the inhabitants initially come across as friendly and eager to practice their trade, but end up insisting on changing people’s hairstyles whether they want them to or not, and are willing to keep them prisoner to do so. Our heroes get away when Jo Musket scares the barbers away with one of his guns, and then hide behind mirrors. The main street is black-and-white checkered; and scissors, razors, combs, mugs, and other haircutting equipment grow on bushes in this town. The ruler is King Harold. According to Karyl’s follow-up, Jodie, the inhabitants later decide to spread out of their community and give haircuts elsewhere in Oz.

The closest they have to a guard is the Shampoo Brigade. The population is only 218, but that might still be more than live in Barberville. A barber named Brussle was rewarded by Princess Ayala with a law that he had to cut the hair of anyone in the kingdom who didn’t cut their own, but he wasn’t allowed to if they did. As such, there was a resulting paradox over whether or not he could legally cut his own hair, so he just let it keep growing.

This is based on a paradox devised by Bertrand Russell, hence the barber’s name. Glinda solved the problem by magically making his hair stop growing entirely, but he got so used to it being floor-length that it remained that way. Since pretty much everyone in Tonsoria cuts their own hair, he’s basically limited to cutting that of the two princesses. Also living there are two wigmakers, Old and Young Wolliwag, who are actually twins but the latter is proud of being three minutes younger. Nobody else cares for Old Wolliwag’s wigs, while Young Wolliwag just uses food items, tastier but even less practical. 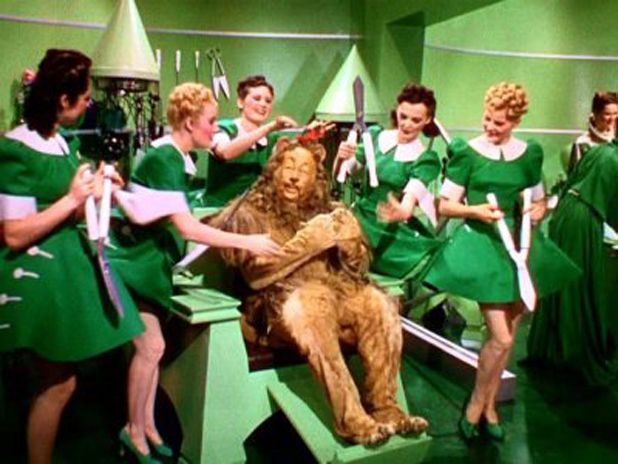 I suppose I should also mention the Wash & Brush-Up Company from the MGM movie, where the employees cut the Cowardly Lion’s hair and give him a permanent, as well as style Dorothy’s. In response to Dorothy’s question, they say they could dye her eyes to match her gown, but they don’t. The Dorothy of the books already has blue eyes, at least according to Thompson. The Lion’s mane bow comes from W.W. Denslow’s illustrations, and first appears in the Emerald City, although I don’t think it’s mentioned in the text.

Ozma does say he “had a big bow of blue ribbon fastened to the long hair between his ears.”

The men restuffing the Scarecrow in this scene are apparently wearing some of the first T-shirts with logos on them, at least according to Wikipedia.