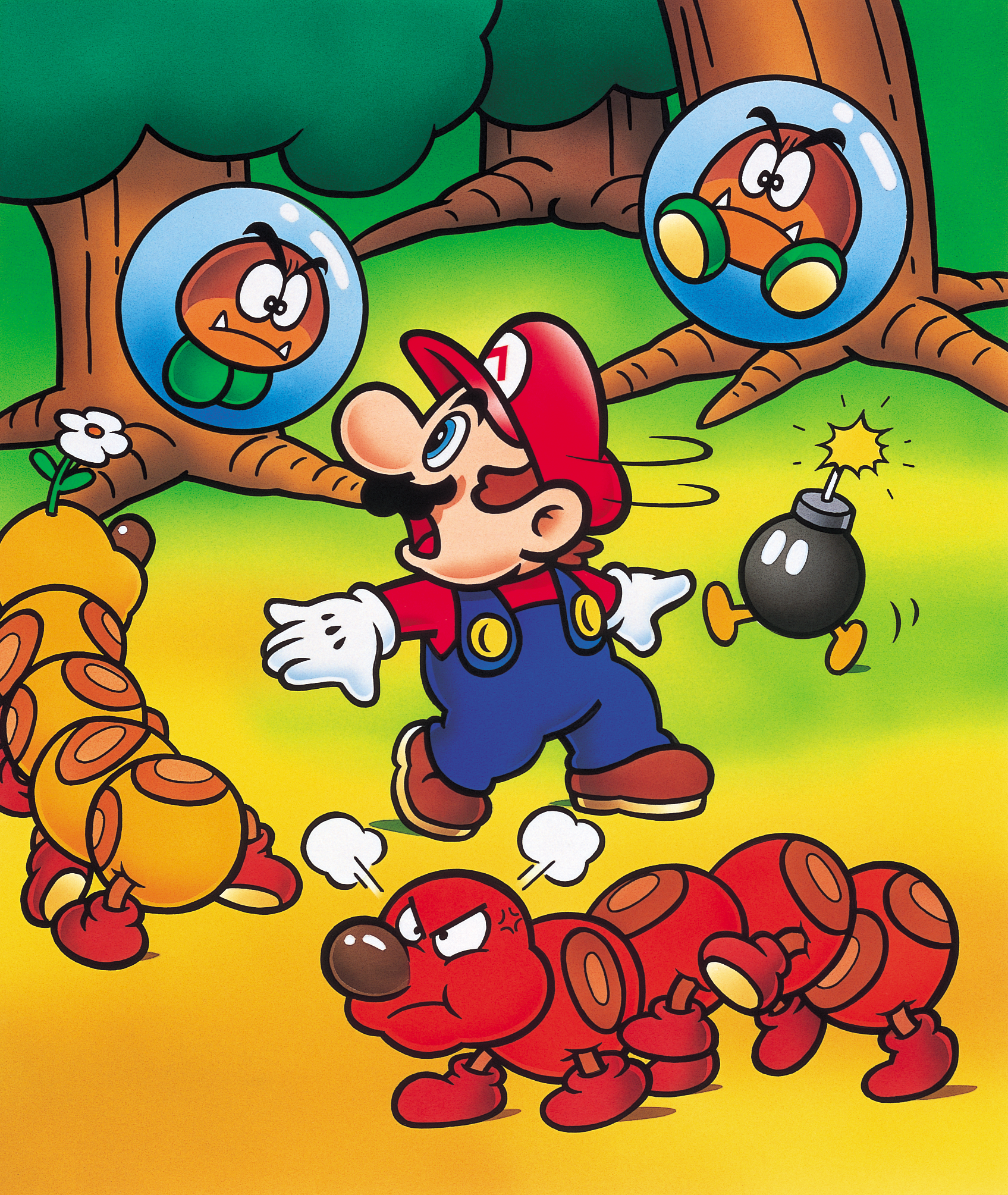 I’ve discussed many enemies from the Super Mario franchise over the years, but I don’t think I’ve said that much about Wigglers, the giant caterpillars introduced in Super Mario World. 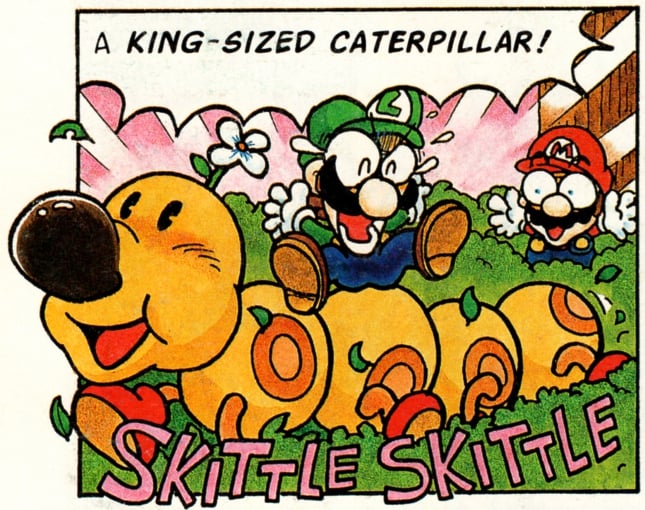 Their thing is basically that they’re normally cute, yellow, and peaceful, with flowers on their heads. If you jump on one, though, they turn red and get really angry. And they wear shoes, because that’s pretty standard practice in this world. At least some of them can also turn their front feet into hands when they need to. 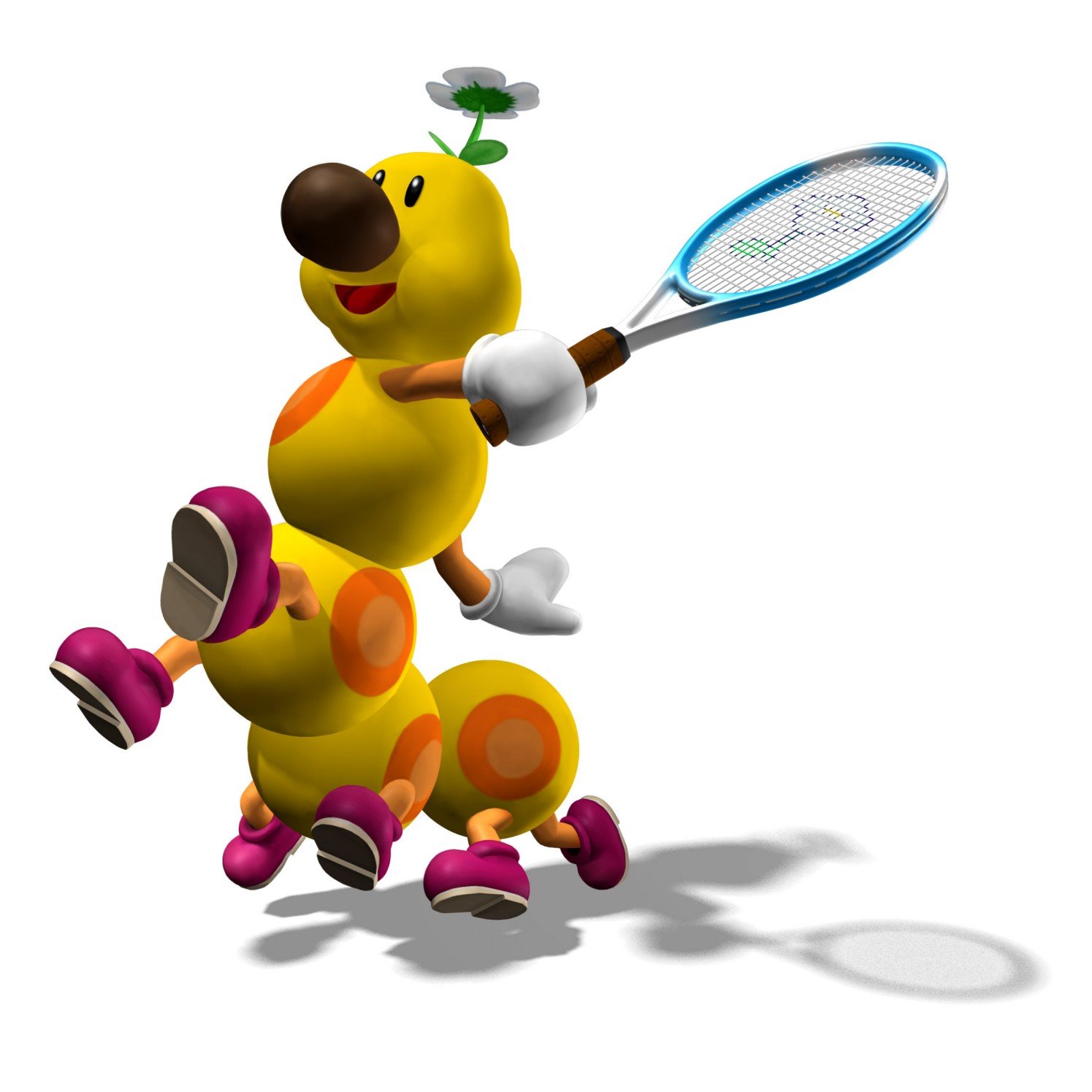 They can’t be killed with fireballs, but Yoshi will gladly eat them.

They come in several different sizes, and some of them are bosses. 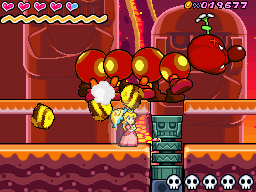 The much bigger ones often don’t react when jumped on, presumably because you’re too small for them to notice. 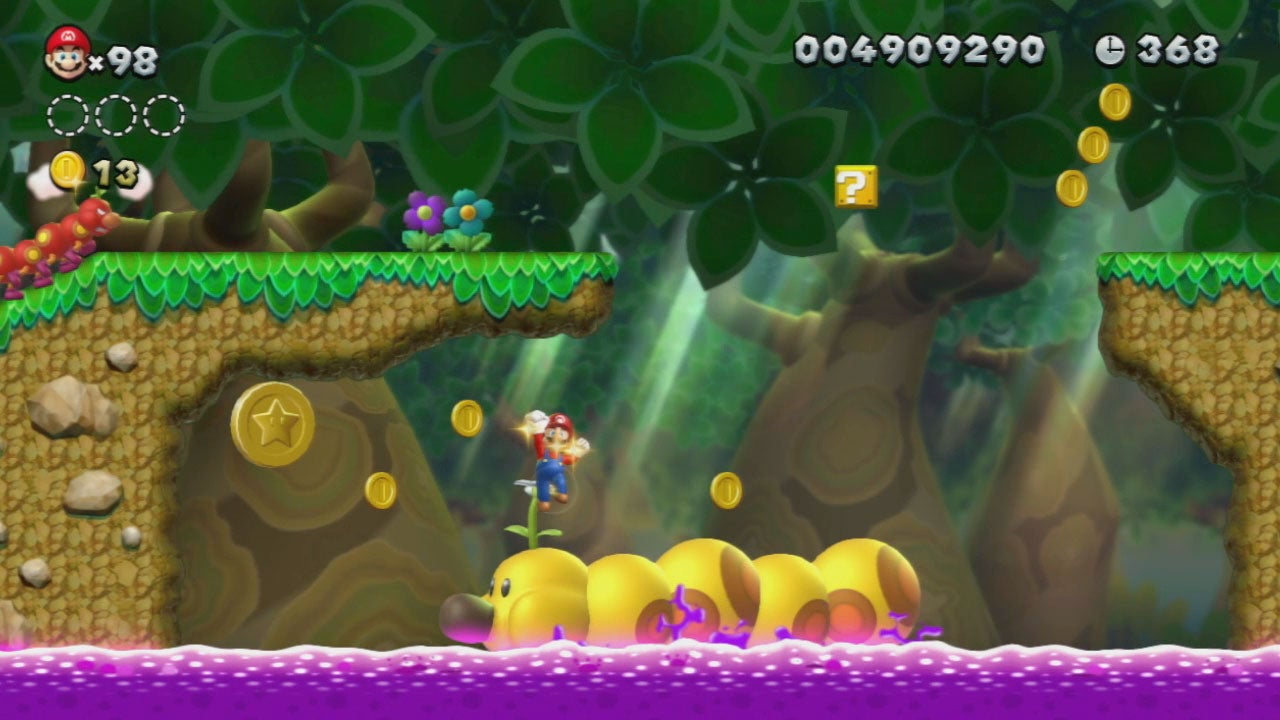 One especially big one can be ridden across a level in New Super Mario Bros. 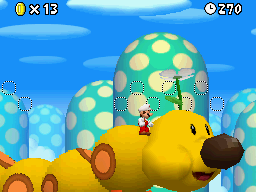 Squigglers are a smaller variety of Wiggler. 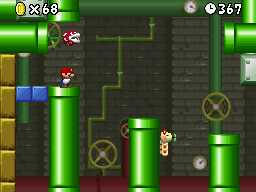 The SMW cartoon had one Wiggler that was small enough to fit inside an apple, and the Princess misidentifies it as a worm.

She’s a schoolteacher in that episode, and she doesn’t even get the right phylum. The Wigglers in the series were always in enraged mode, perhaps because of the sloppy animation. They’re never called Wigglers either, probably because the enemy names hadn’t been officially translated when they made the show. In Japanese, they’re called Hanachan, which is “flower” plus an honorific suffix. Several games indicate that Wigglers often have a passion for gardening. In Bowser’s Inside Story, Bowser comes across a Wiggler-run family farm in Dimble Wood, where the caterpillars grow vegetables. The Koopa King has to fight one particular Wiggler after being scolded for eating the giant carrot that the caterpillar told him to eat in the first place. Not only do you have to get the Wiggler out of enraged mode, but he also grows plants to use against Bowser. He’s the last boss in this game I’ve managed to beat so far, but it took a long time. There’s just so much to watch out for, including Fly Guys who will attack from time to time.

In Mario Party DS, you have to defeat a Piranha Plant who’s wreaking havoc on a Wiggler’s farm. 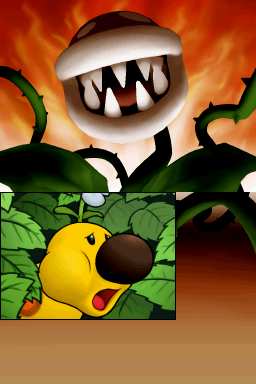 And a Wiggler in Mario and Luigi: Dream Team dreams of starting a flower garden. 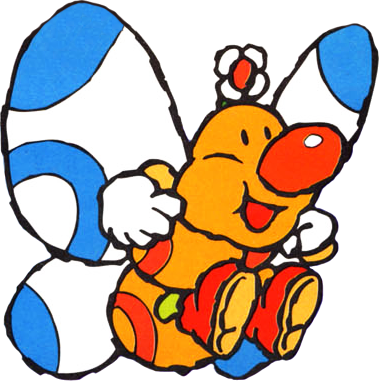 Seeing as how they’re caterpillars, Wigglers do have a butterfly form, Flutters, although they don’t show up that often and I don’t think you ever see a chrysalis. They first appear in Yoshi’s Island, and they also get angry when jumped on. I suppose I would be as well, especially if it knocked off the flower I was wearing. The Wiggler in Mario Power Tennis is capable of turning into a Flutter for a power shot. 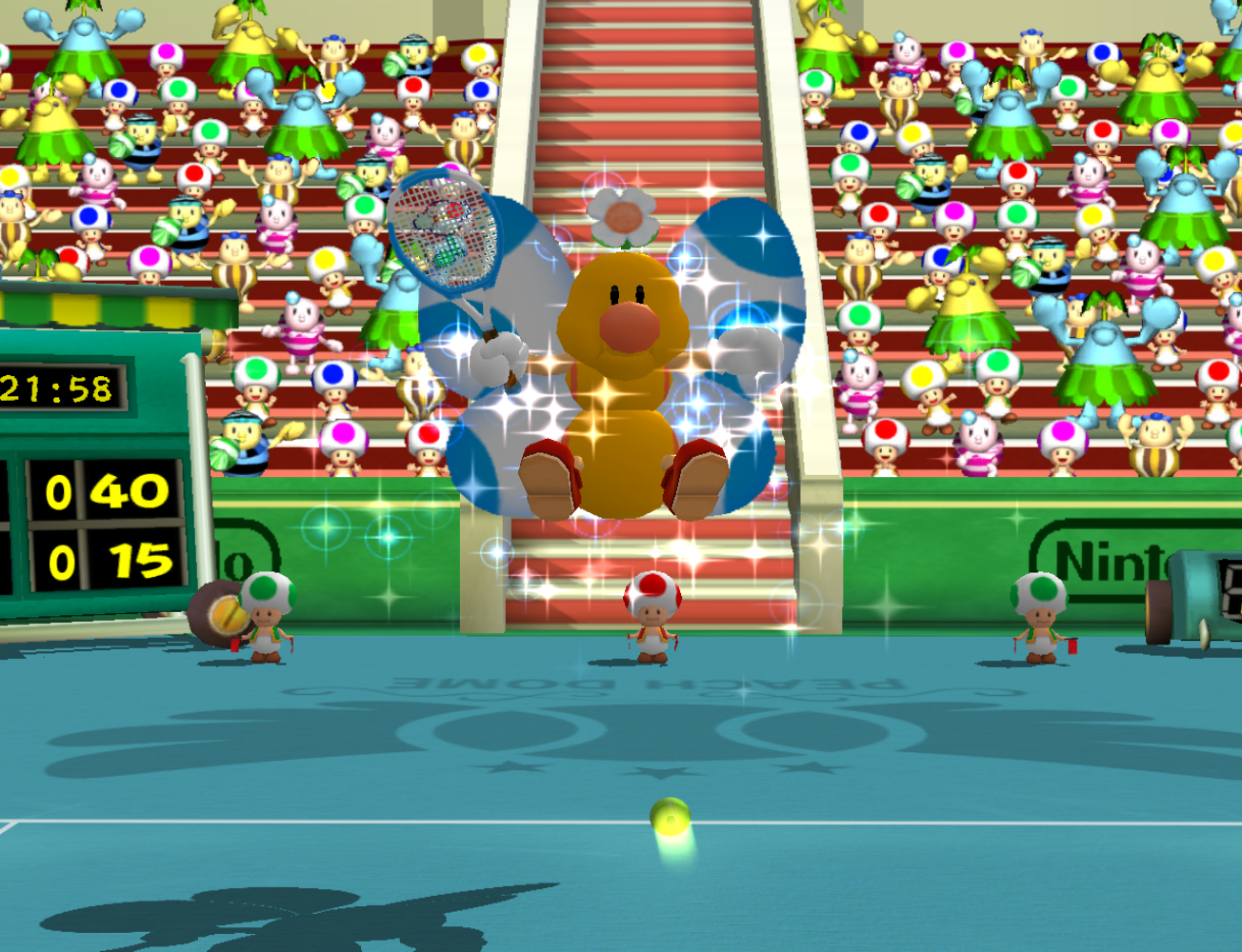 Both Sticker Star and Paper Jam have Wigglers who turn into Flutters and will give Mario (and Luigi) a ride.

The one in the former is a simple fellow who lives in a tree and keeps an illustrated diary, but Kamek makes his segments move around separately in order to cause trouble. 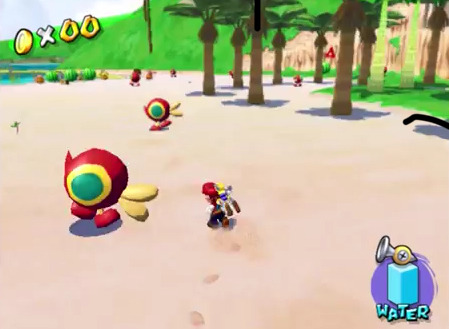 Speaking of separated Wiggler segments, that’s what the Cataquacks in Super Mario Sunshine look like, except with duck bills on them. They also resemble Tony Millionaire’s Drinky Crow. 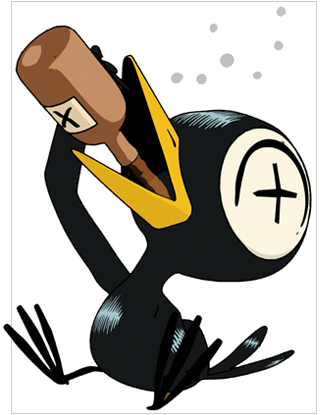 The “cat” part of their name comes not from any feline trait, but from their habit of catapulting anyone who touches them into the air. I guess it could also be due to their connection to caterpillars. 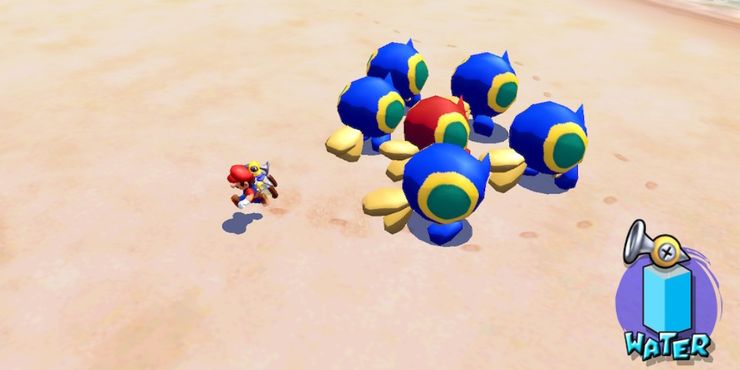 There are both blue and red Cataquacks, but there really should be pink ones, for when you want to go riding on the Freeway of Love.
The similar Plungelos have parrot beaks and plungers for feet. 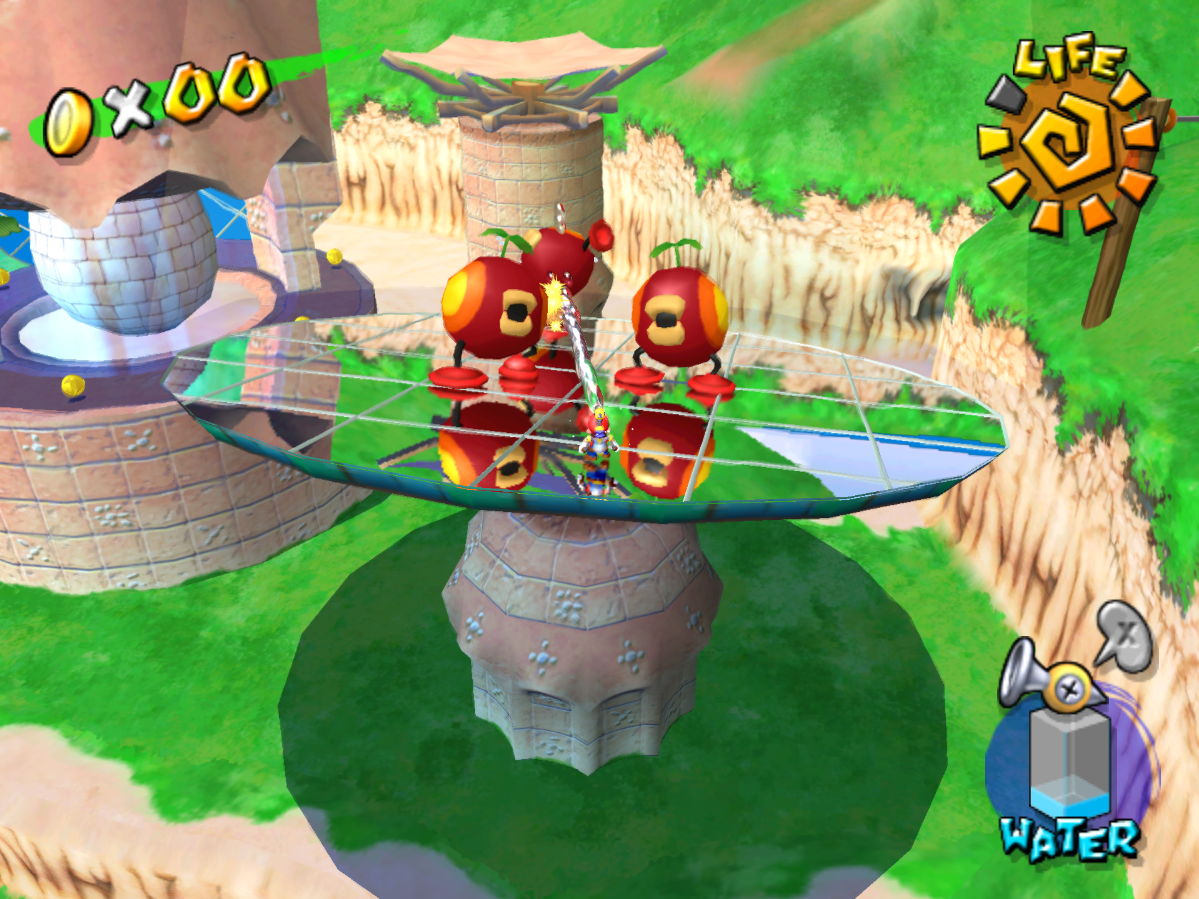 I don’t know whether either of them are actually related to Wigglers, but the space bees of Super Mario Galaxy apparently keep Cataquacks as pets. 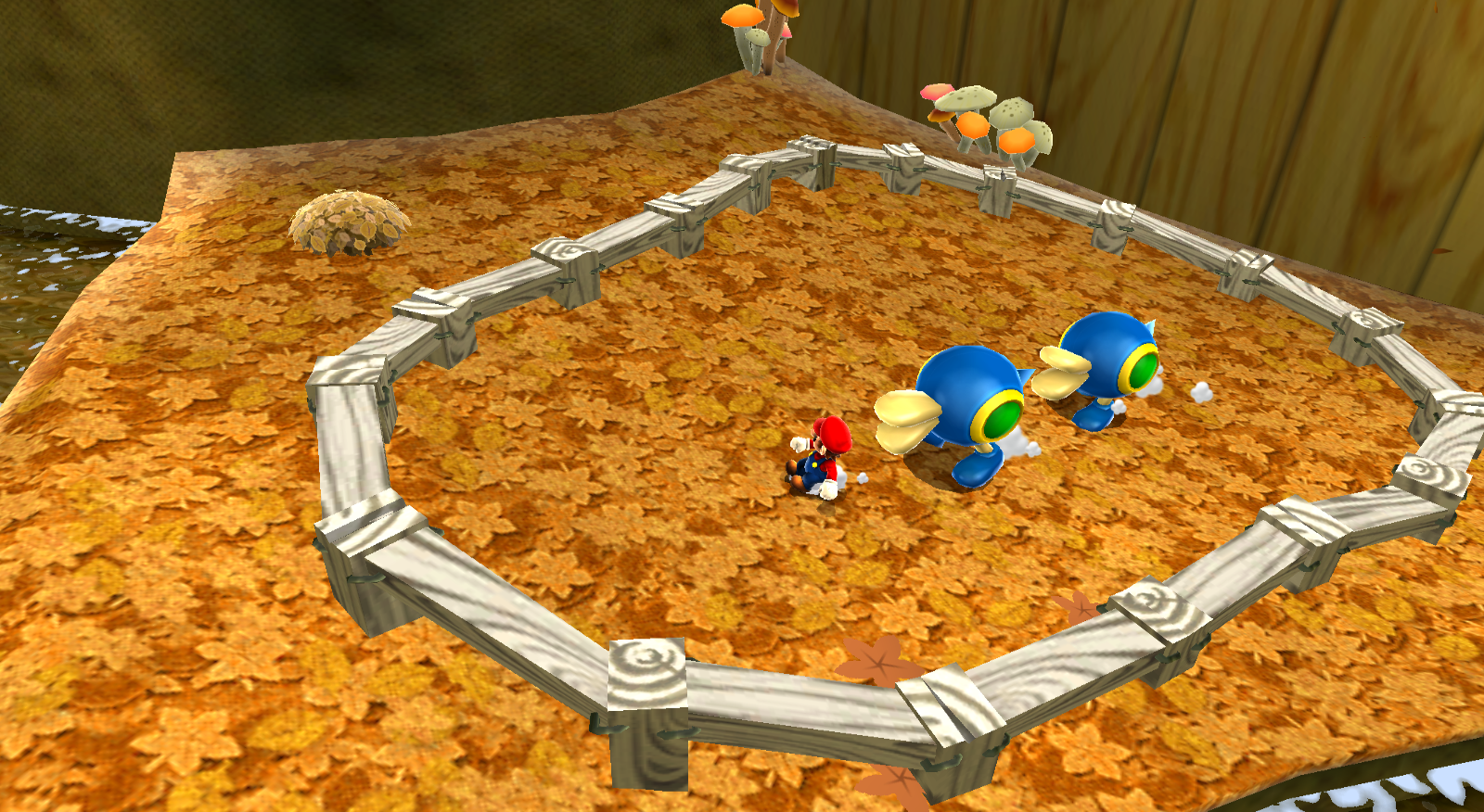 Another variety is the Tropical Wiggler you can find in the Lost Kingdom in Super Mario Odyssey. These caterpillars have spiked bodies that they have a habit of expanding and contracting. The brochure for the kingdom compares them to traffic lights, and a biologist to accordions. 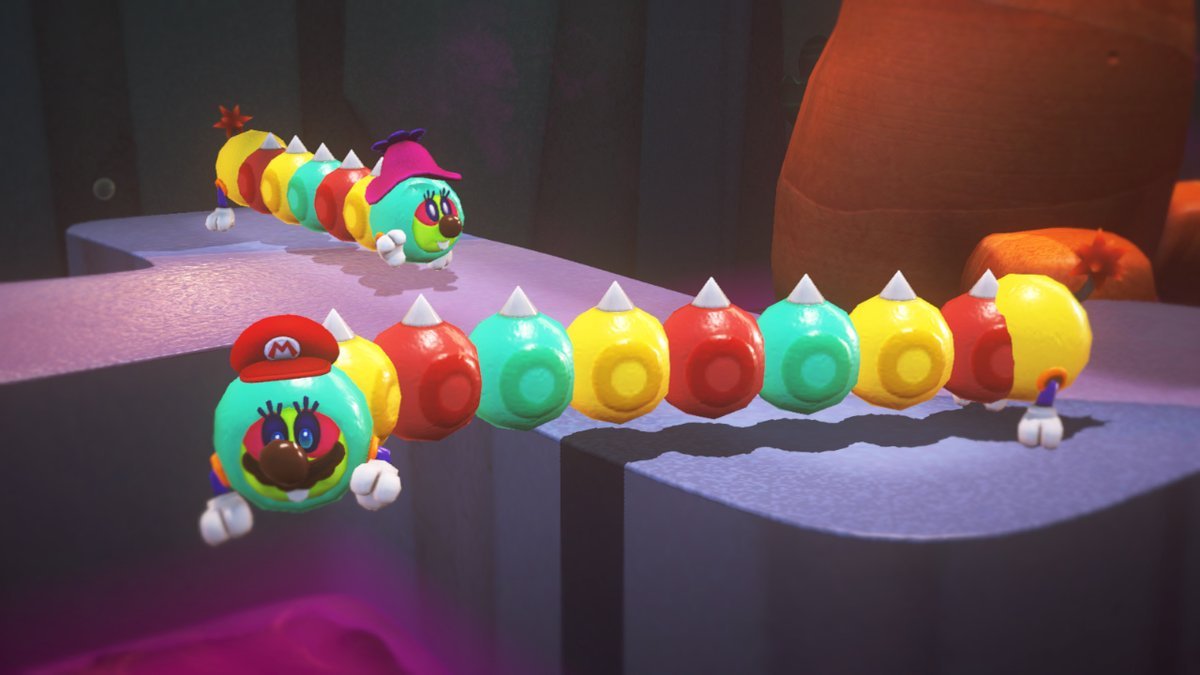 They don’t attack anybody, but they can unintentionally hurt you if you run into them. Capturing them provides an interesting mechanic and a temporary way to avoid the poison that’s all over the tropical islands. They also seem to have a butterfly form, but you only see one of them. 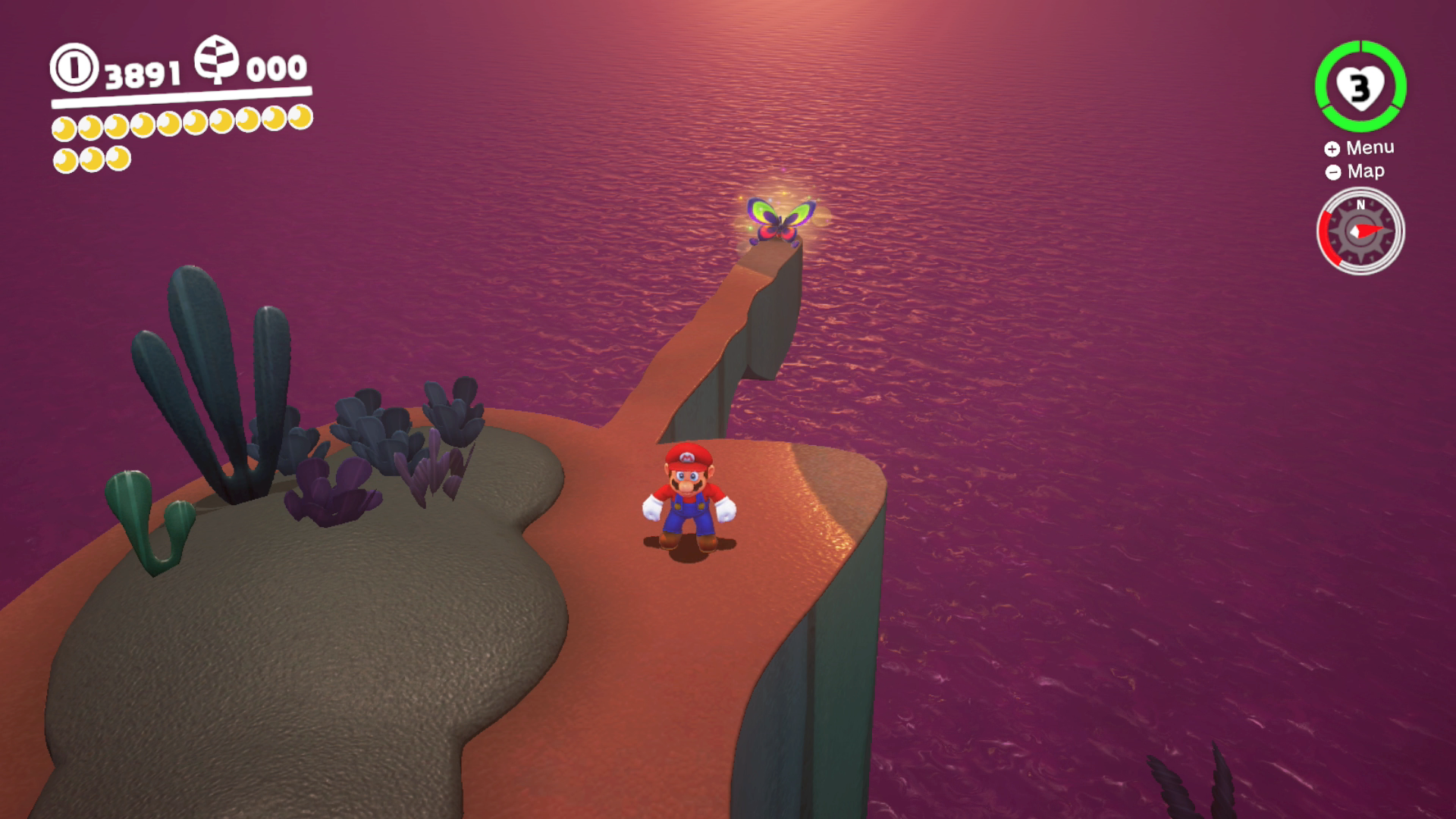 This game also has a robotic Mechawiggler that’s trying to suck the power from New Donk City. You have to shoot all the segments, sort of like in Centipede. And Fuzzlers in Super Mario 3D World are a sort of cross between Wigglers and Fuzzies (not the Yoshi’s Island kind that make dinosaurs dizzy). 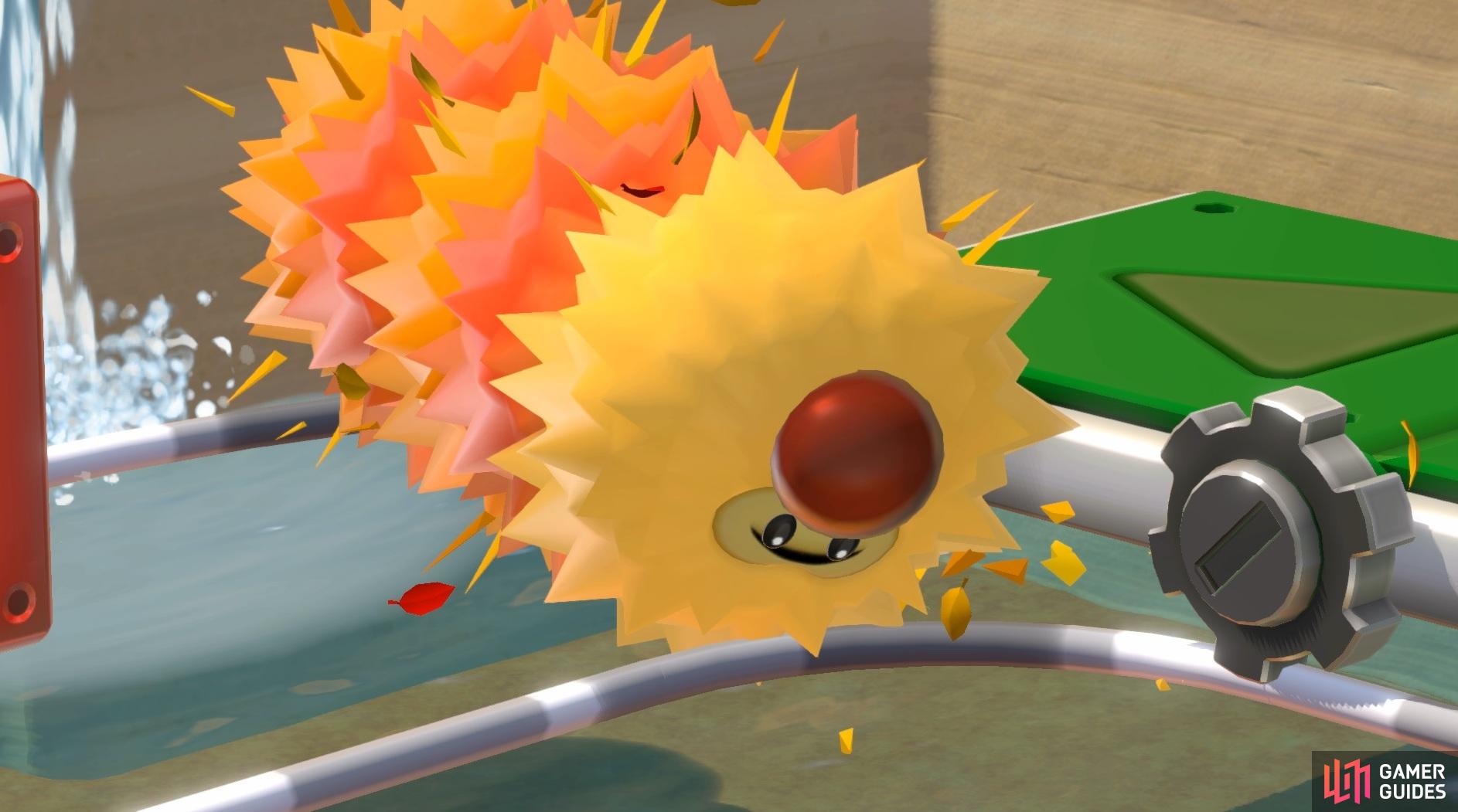 I’m also interested in the Wiggler Wagons, which are long, segmented buses that show up in Mario Kart: Double Dash! 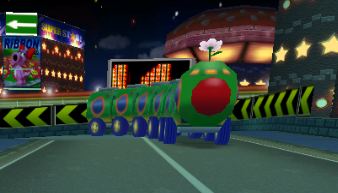 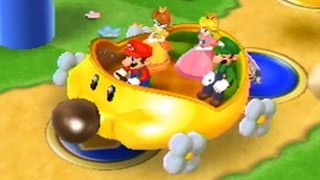