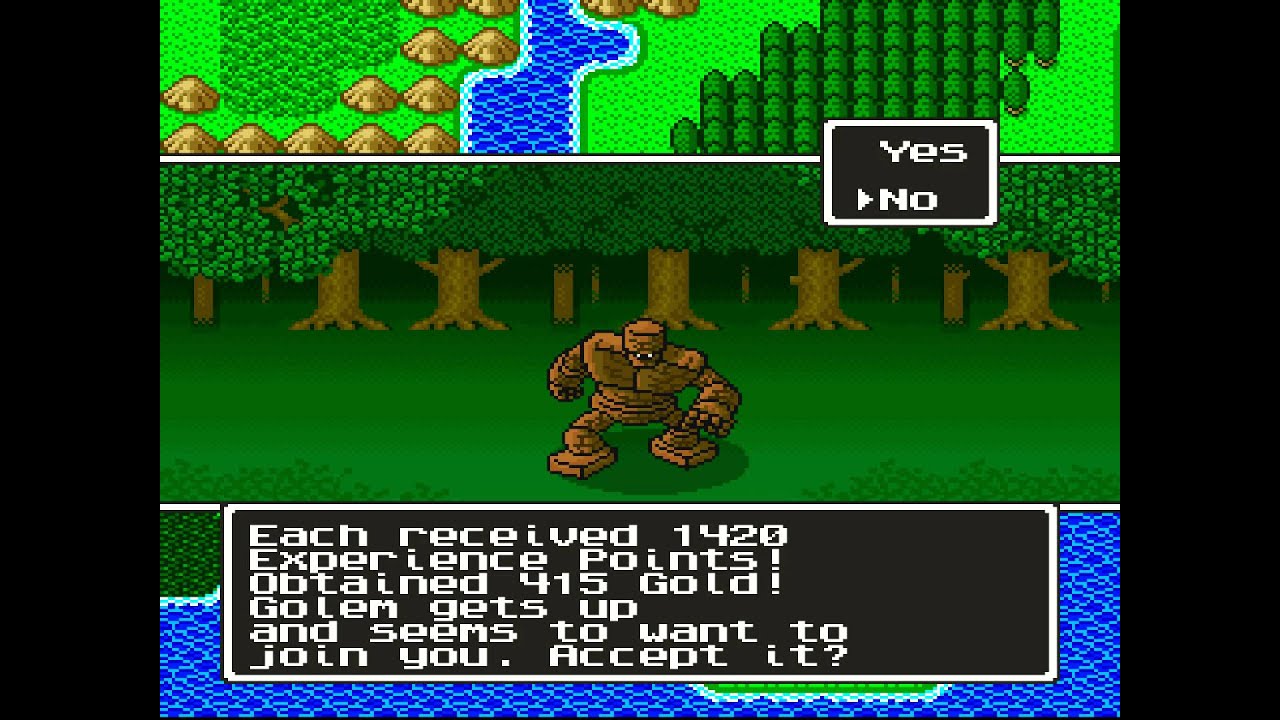 Someone proposed on a Facebook post that you don’t actually kill the monsters in the Dragon Quest series. I don’t think I can link to it, since it’s on a private group. It generally seems like you are killing them, despite the fact that some of them are cute, and won’t even necessarily attack you.

Khalamari Kids often prefer to draw in the sand, Candy Cats will sometimes use up their turns cleaning themselves and rolling around.

Don’t cats usually only roll onto their backs if they trust who’s around them? But you get experience from beating up these creatures, so I do it anyway. But one point the post’s author made was that, in DQ5, sometimes a monster will get up after being defeated and offer to join your party, which seems like it would be hard to do if they were dead. The monster-recruiting mechanic is said to have inspired Pokémon, where the monsters can’t die, just faint.

You can’t catch a Pokémon after they’ve fainted, however, while in DQ games, most notably the Monsters subseries (but not the Monsters: Joker games), you usually have to defeat them first. In DQ7, defeated monsters will sometimes get up and express interest in the monster sanctuary.

It’s traditional in video games for defeated enemies to just fade out of existence. Better graphics and more mature themes mean that isn’t always the case these days, but although it has discussed death rather seriously, the DQ series tends not to be gory. Baramos just says he’ll eat your intestines; you don’t see him do it. And while older games just had monsters disappear after they were defeated, newer ones have them fall over and THEN disappear. The way role-playing games often work, however, some of the more significant enemies will disappear on the battle screen, but then show up after that to deliver some more dialogue. In the case of the Slayer of the Sands in DQ11, Prince Faris’ entourage loads the knocked-out monster onto a cart and brings it back to town, where it wakes up and attacks him. 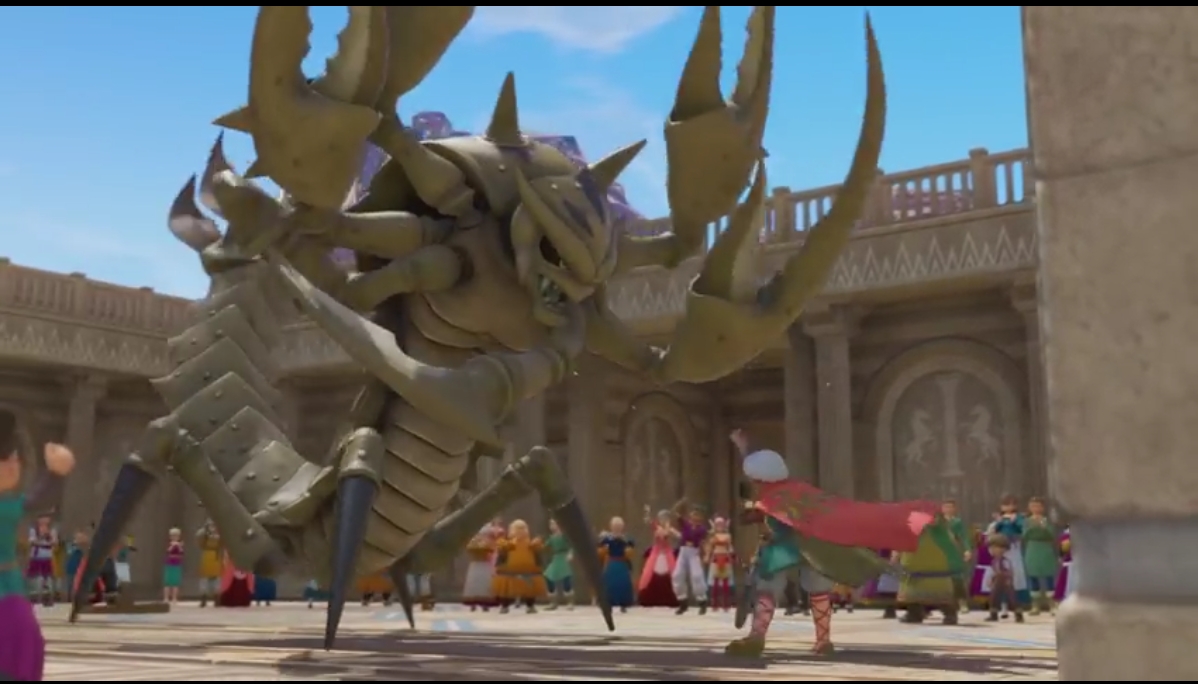 And sometimes you can get items that were presumably part of a monster’s body, especially with the alchemy ingredients in 9. I’m reminded of how, in Rick Riordan’s books based on Greek mythology, monsters will return to Hades when they’re defeated, but will sometimes leave something behind as spoils of war, like Medusa’s head or the Minotaur’s horn. In the DS version of DQ4, Aamon tells Psaro that Estark will see him in Hell, but I don’t know whether that’s an accurate statement on monster afterlives. 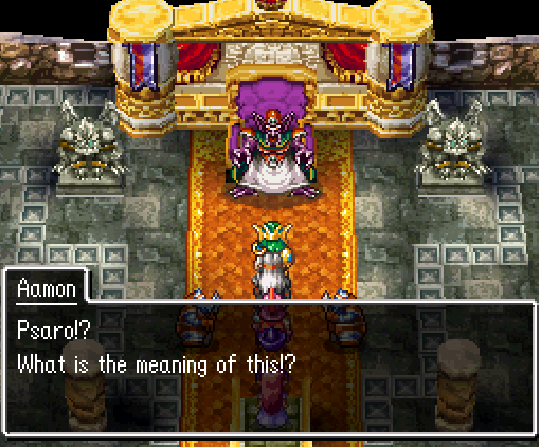 And there are spells that are specifically said to cause instant death, not just instant defeat or vanishing. On the other hand, if your characters can be brought back to life, maybe monsters can as well. There are monster priests, after all.

Demon Lords will often return in later games as legacy bosses, but whether that means they’re actually being resurrected or in-universe isn’t entirely clear. I wouldn’t think a being that’s essentially an evil god would be easy to keep down forever, but if it were that easy to revive them, it would make your victories against them rather more hollow. 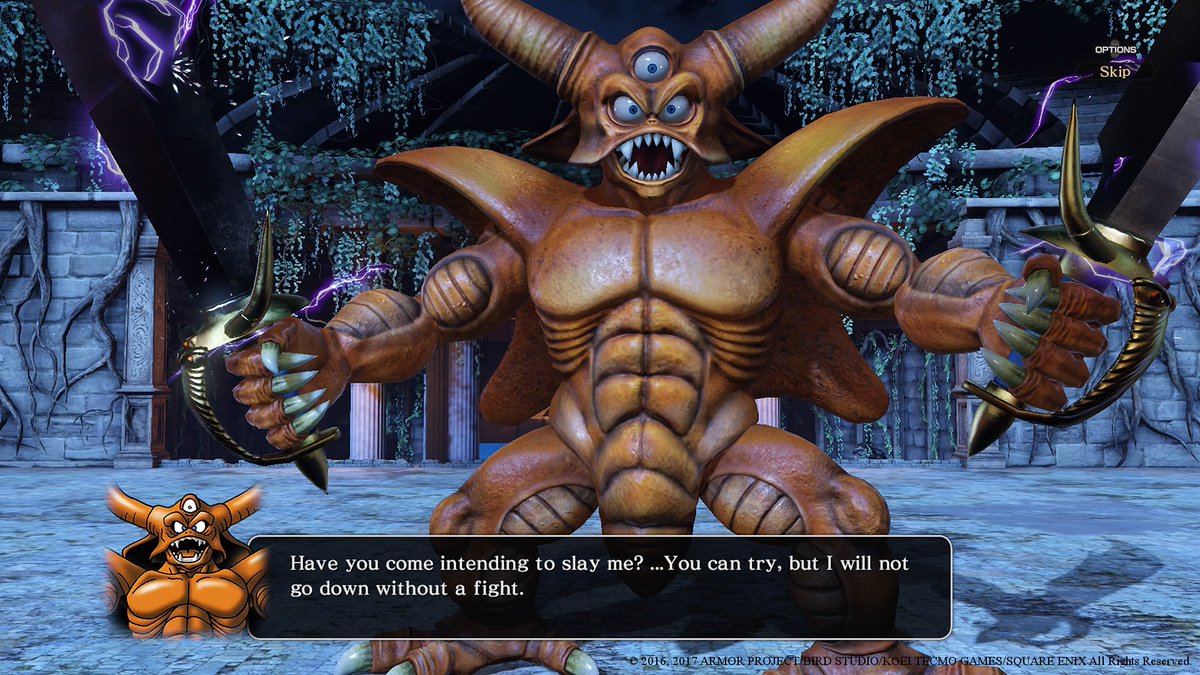 The Mario series is another one where I’ve seen this topic discussed. Shigeru Miyamoto has apparently said before that Mario doesn’t kill, although he later clarified that this doesn’t mean he wouldn’t necessarily kill, say, a bug. Still, many of the monsters he meets in the games are sentient and capable of speaking, so that’s hardly the same. 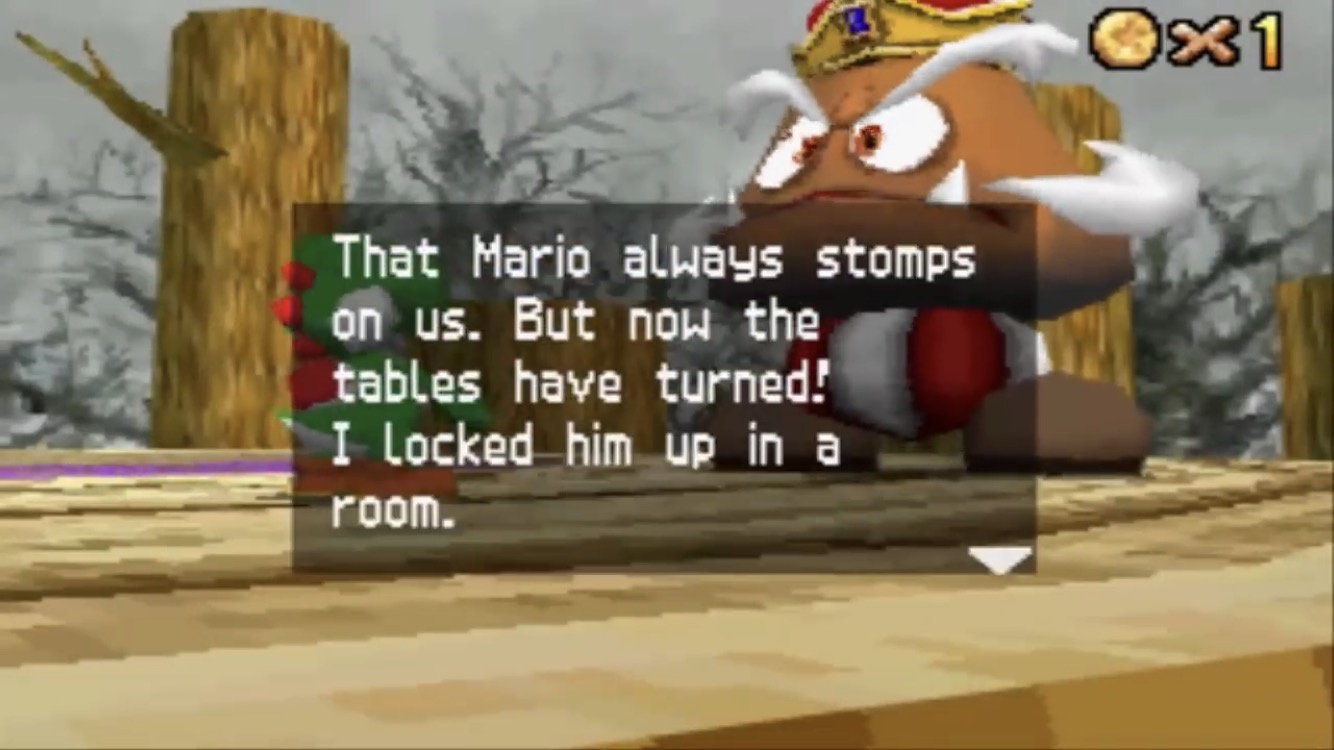 There’s a line in Paper Mario: Color Splash that seems particularly relevant here, where a Goomba says he’s tired of being stomped on. 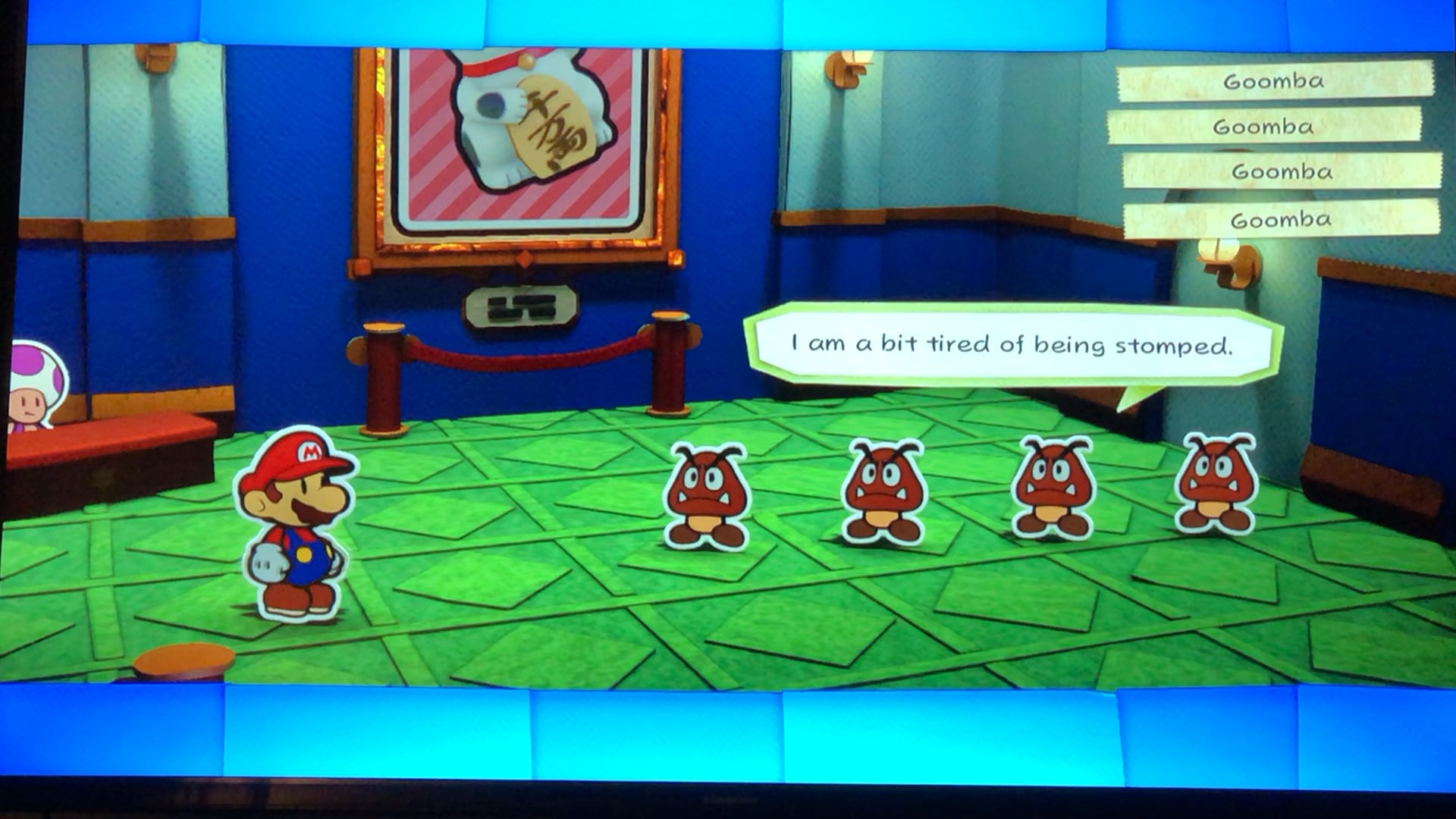 There are other lines like this that could probably be interpreted as just referring to Goombas in general, but here it definitely seems to be this one individual Goomba who’s been stomped on, perhaps multiple times, and survived.

And of course there are major characters who will disappear after a fight, but then show up again later no worse for wear. Extra lives could be an explanation, but it might also be the case that the enemies are knocked out instead of dying.

As Michael Palin might say, they’re not dead, just resting. And there’s always Bowser Jr. using magic to bring his father back to life from a skeletal form in New Super Mario Bros. 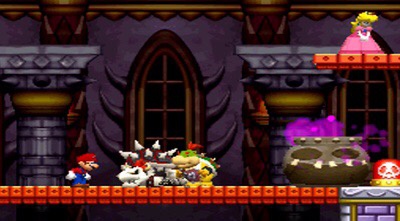 In the Nintendo Comics System, enemies would sometimes still talk and move around after being stomped on or otherwise attacked.

I’m also reminded of the old Legend of Zelda cartoon, where, probably due to network standards or something, Ganon’s minions wouldn’t die when zapped with Link’s sword but just disappear and reappear in a big jar in their boss’s lair. Even Ganon himself ended up there sometimes. I guess that could also be an in-universe way to explain respawning. On the other hand, I remember one of the Nintendo Adventure Books describing some monsters (Tektites, maybe?) oozing blood after being shot with arrows by Zelda, which seemed a little out of place.

3 Responses to Not Dying Today