I’d been interested in the story of the Mahabharata, even more so since reading the Aru Shah books, in which the Pandavas are reincarnated as teenage girls. So I checked out an abridged edition translated by William Buck. While much shorter than the full epic, it was still a little difficult to follow. The Pandava brothers were exiled numerous times, there were a lot of tangents, and it was sometimes hard to remember who was who. Maybe it’s just me. It tells the story of the Kurukshetra War between two branches of the same family for the throne of Hastinapura in northern India. The name of that place means “city of elephants,” but it’s not where Babar rules. There have been attempts to date the conflict that might have inspired the story, but nothing has been determined for certain. When an earlier king, Vichitravirya, dies without an heir, his mother gets her oldest son, the sage Vyasa, to father children with the late king’s two widows. This results in the birth of two sons, Dhritarashta and Pandu. The former is blind because his mother closed her eyes during sex (not really how genetics work, as far as I know), which prevents him from inheriting the throne. The latter is born pale, as his mother turned pale upon seeing the sage. And this Vyasa is credited with writing the epic, so I suppose this is some self-deprecation. A later tradition was that Ganesh wrote down the poem with his broken-off tusk. 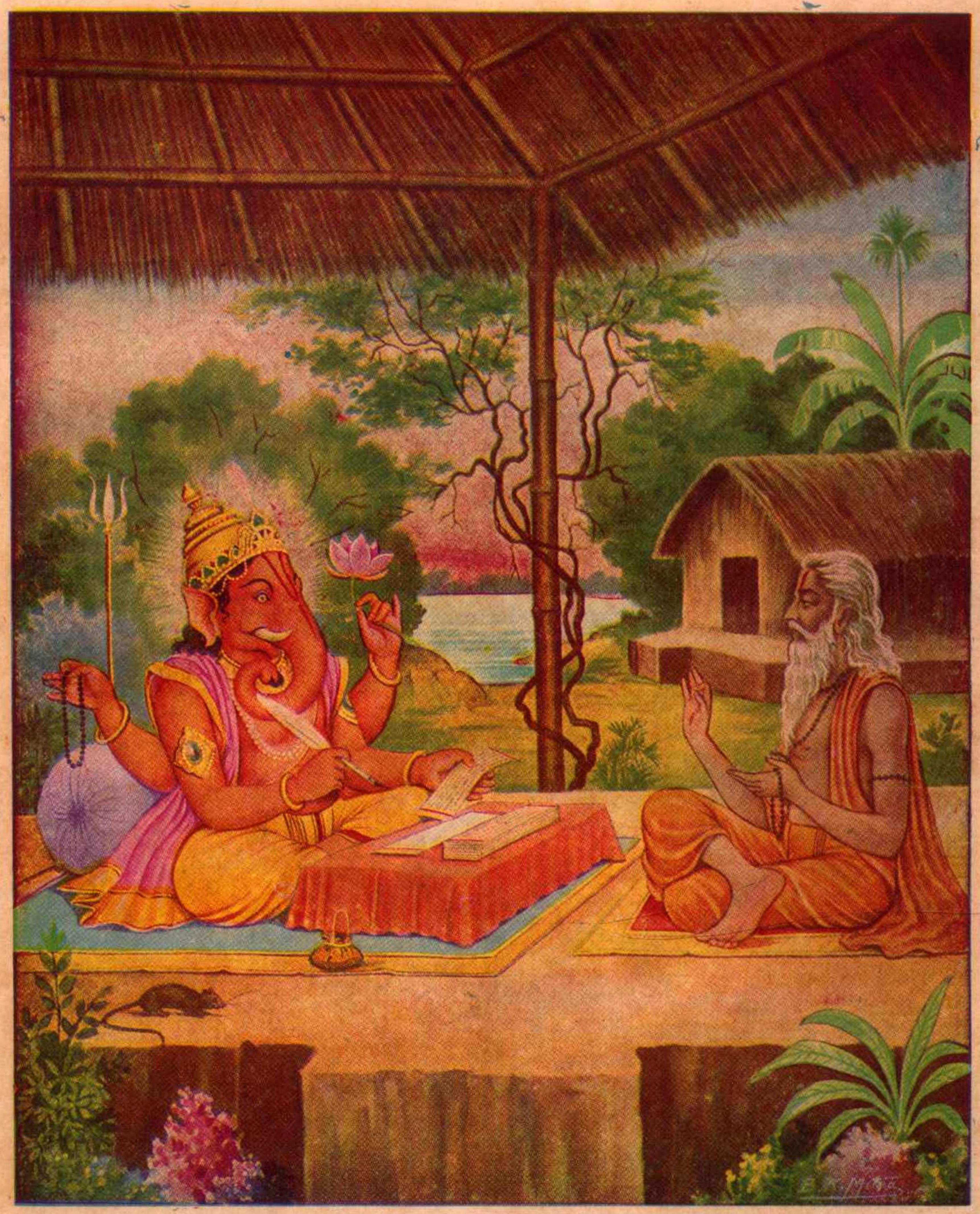 Dhritarashta has one hundred sons, while Pandu is cursed by a sage he accidentally shoots with an arrow to die if he ever has sex. Fortunately for him, his wife Kunti has access to a mantra that she can use to summon gods to impregnate her, so she has Yudhisthira with Dharma Raja, Bhima with the wind god Vayu, and Arjuna with Indra. She shared her secret with Pandu’s other wife, Madri, and she had Nakula and Sahadeva with the twin gods known as the Ashvins.

Kunti had actually had another son out of wedlock before this, Karna, son of the sun god Surya, whom she placed in a basket on the river like Moses, Sargon, Romulus and Remus, and the Luminary.

He allies himself with the Pandavas’ cousins, the Kauravas, due to his friendship with Duryodhana and rivalry in archery with Arjuna. He’s written as kind of a noble villain, someone who’s intent on doing the right thing but is on the wrong side. Arjuna wins the hand of the Princess Draupadi by winning an archery contest, but since Kunti tells him to share his prize with his brothers without knowing what it is, all five brothers end up married to the same woman.

Some of them end up with other wives as well, by the way, although these wives aren’t allowed to live in the same place with Draupadi. The Pandavas go into exile, turn a barren tract of land into a prosperous kingdom, and go into exile again after Yudhisthira gambles away his and his brothers’ freedom, their kingdom, and their wife. I think ancient India could have used some stricter gambling laws. Draupadi actually did challenge the legality of her being gambled away after her husband had already lost his own freedom, but she just ends up being abused by her captors. She seems to be a somewhat divisive figure, with whether it was right of a woman to protest injustice being in question. Retellings of the story also tended to make Draupadi appear worse, although she really was the one who was done wrong. Women never do seem to be treated very well by these old epics. Anyway, I’ve seen some indications that the game Yudhisthira played was a version of Pachisi, which I used to play as a kid, although I’m sure the rules have changed over the centuries.

During the long, bloody war between the cousins, Arjuna’s charioteer Krishna told him he had to do his duty as a member of the warrior caste, and that part of the tale is the Bhagavad Gita.

An article I came across points out that, while here the Gita encourages killing, Gandhi used it as support for nonviolent resistance. Of course, he was in a different caste than the Pandavas. I’ve never been comfortable with the idea of birth determining your lot in life, even though that’s somewhat the case even in our culture, where most people don’t believe in dharma. There’s no official class system, but your fate is still largely determined by the situation you’re born into, unless you happen to be one of the lucky ones who gets other opportunities. I sometimes wonder whether there’s something in which I could really make a difference, but I’ll never know what it is. And as a white guy born in the United States, I don’t even face the barriers many of my fellows do.

2 Responses to Pandering to Pandavas