The Sopranos – WARNING! SPOILERS! I’ve seen headlines recently that a lot of young people have started watching this show. Beth and I just finished watching it recently, but I don’t think we count as young people anymore. I didn’t realize how old it was, really; I was still in college when it started. It’s the whole thing with my generation especially where everything after 2000 still seems kind of new. It was Beth’s idea to watch it, and she was more invested in it than I was, but I did enjoy it. I think the main things I knew about it beforehand were Tony being in therapy, people yelling “OH!”,and “gabbagool.” It’s also interesting to me that, when they kept playing Journey’s “Don’t Stop Believing” in the commercials for Glee, people would have already known it as the song playing when Tony Soprano was probably killed. I don’t really have a deep analysis of its themes or anything, but there were things I felt worthy of mention. Beth commented on how a lot of it is kind of everyday and mundane despite the violent crime constantly going on. The gangsters aren’t glorified, but they’re humanized. There’s also a genre-savvy layer to it; the characters talk about mob movies and how they’re not entirely accurate, yet a lot of the same attitudes and tropes come into play. Everything comes across as ultimately futile, not because crime doesn’t pay (as we can see, it plays plenty), but that a profession that fosters violence and secrecy can’t possibly end well. The hypocrisy of the emphasis on family and loyalty is obvious, particularly with Tony and Uncle Junior maintaining a level of civility with each other while in a constant deadly struggle for power. Tony ends up killing some of his best friends. And Adriana, who sticks with Christopher through his constant abuse and cheating, and is then betrayed and murdered for something she really had no control over, is especially screwed. Another bit of hypocrisy that stuck out for Beth was how Phil Leotardo kept insisting that homosexuality is a sin, as if stealing and murder somehow aren’t. (Hey, those two made the Top Ten!) With the therapy, Tony tries to work through his everyday problems without touching on the root causes, and his therapist somehow sticks with him for years when he alternately threatens and hits on her, presumably out of some underlying belief that she can help him. Apparently people falling in love with their therapists is a thing, sort of a less R-rated equivalent of thinking a stripper likes you. But then, Tony DID have sex with strippers. What’s my point here? I’m not sure. I have heard that the therapy itself isn’t all that accurately portrayed, and while that’s not something on which I have a lot of knowledge, it did seem a little overly Freudian. But part of that might be because the fictional narrative structure is kind of Freudian, every dream being symbolic and problems often coming down to issues with parents. Tony’s dreams come into play a lot, sometimes being almost an entire episode. I wasn’t sure I’d seen Lorraine Bracco in anything else, but she was actually in Goodfellas, there playing a character who wasn’t Italian. She’s second in the opening credits, despite appearing much less often than other characters. I also remember seeing something recently about how “gabbagool” comes from a southern Italian accent that’s common among people in the New York area. I suspect that’s also why a lot of Italian-Americans (including in the show) say “Mare-io” when he himself clearly says “Mah-rio.”

I suppose Mah-rio likes capicola and Mare-io likes gabbagool. You know, a Gabba Ghoul sounds like it would be a Dragon Quest monster. 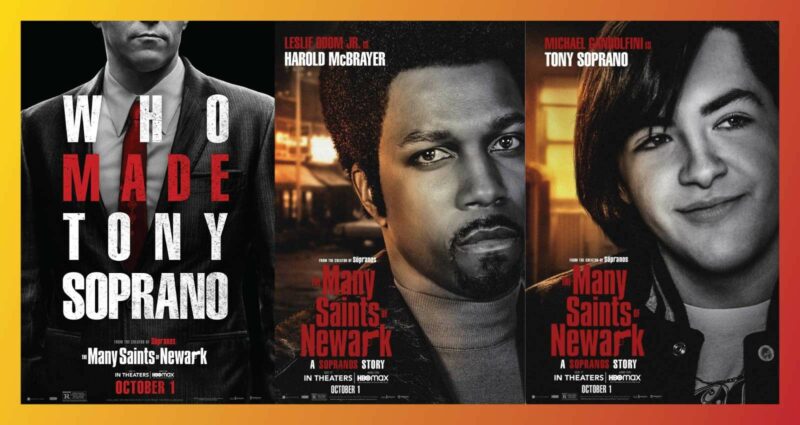 Just today, we watched The Many Saints of Newark, the prequel film, which came out very soon after we’d finished with the show. I’ve noticed that, with prequels, there are often frequent references to and foreshadowing of the material people already know. It’s not necessarily a good or a bad thing, just a thing. It can be annoying when characters who really shouldn’t have known each other are forced together, Muppet Babies style, but this didn’t have that problem as it was already well established that most of the characters had known each other for a long time. I’ve heard the movie got some bad reviews, but while I didn’t necessarily think it added a whole lot to the story, I didn’t have problems with it either. The late James Gandolfini’s son Michael plays a young Tony, but the main focus is on his mentor Dickie Moltisanti, Christopher’s father. Christopher narrates the film from beyond the grave, and the movie makes it clear that the guy Tony claimed killed Dickie had nothing to do with it; it was an inside job. The plot is tied in with the 1967 race riots in Newark, and part of the story focuses on a Black man working for Dickie who decides to start his own Black-led numbers racket, and the resulting conflict with the mob. It’s interesting that we see very little of Dickie’s wife, while his relationship with his mistress, who was originally his stepmom, gets a lot of attention. Other familiar characters have significant roles as well. A young Carmela has only a small part, but the actress they got really looks like her.