Beth had bought some tickets for an Off-Broadway production of Little Shop of Horrors at the Westside Theatre, and we saw it last night. I don’t think I actually saw the musical movie with Rick Moranis until college. I remember a kid in my class at elementary school having an Audrey II bank that you could feed coins, which was cool, but I’m not sure at the time I even realized the movie was a comedy. I also recall seeing a few episodes of the 90s cartoon Little Shop that was loosely based on the same premise but toned down for kids the same way a lot of other stuff at the time was, with Seymour, Audrey, and the sadistic dentist becoming children, and the plant just TALKING about eating people instead of actually doing it. Apparently Roger Corman was a consultant on the show. For what it’s worth, I still haven’t seen the original non-musical Corman film, although I probably should. Beth had a thing for Moranis when she was young, so she was quite familiar with his version. As is usual with such adaptations, the movie cut a few songs that weren’t as relevant to the plot, and added a different one in (“Mean Green Mother from Outer Space”). They also famously changed the ending to a less nihilistic one…that lets Seymour get away with murder. As far as I can tell, this performance stuck to the original theatrical plot and songs, including one that Orin sang while asphyxiating on nitrous oxide. Seymour was played by Jeremy Jordan, who’s been in a lot of stuff. He didn’t remind me especially of Moranis in the role, although of course he was a similar type. Some of his inflections kind of reminded me of when Bruce McCulloch plays kids. Christian Borle was Orin Scrivello, but also played several incidental characters, mostly in a hammy way with a lot of pauses for comic effect. Aaron Arnell Harrington did the voice of Audrey II, who was represented with several quite impressive puppets for her different sizes. I guess the role is sort of a drag performance, the plant technically being genderless but with feminine features and voiced by a man. I wonder what people thought of the recent Simpsons joke about Audrey II identifying as a tree because they’re a “trans-plant.” 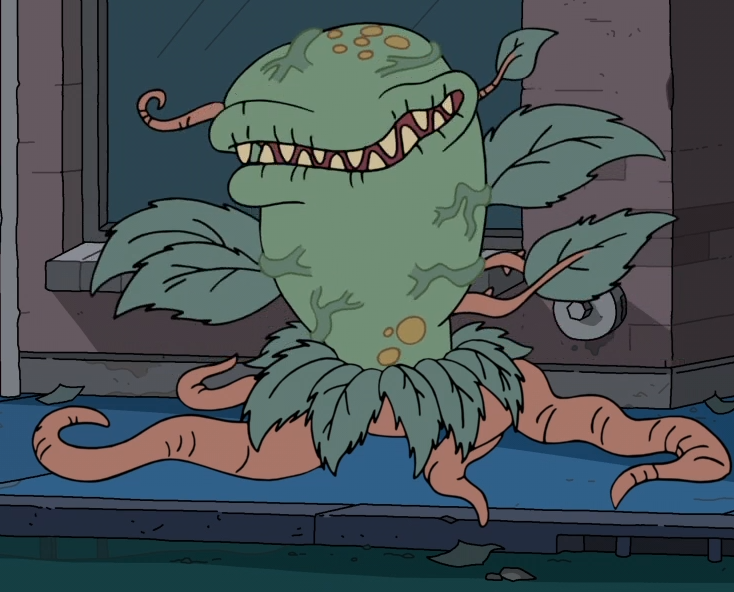 It’s probably also worth mentioning again that Levi Stubbs used pretty much the same voice he did with the plant for Mother Brain in Captain N. Anyway, the show was a good time. The theater had several alien plants as decorations.