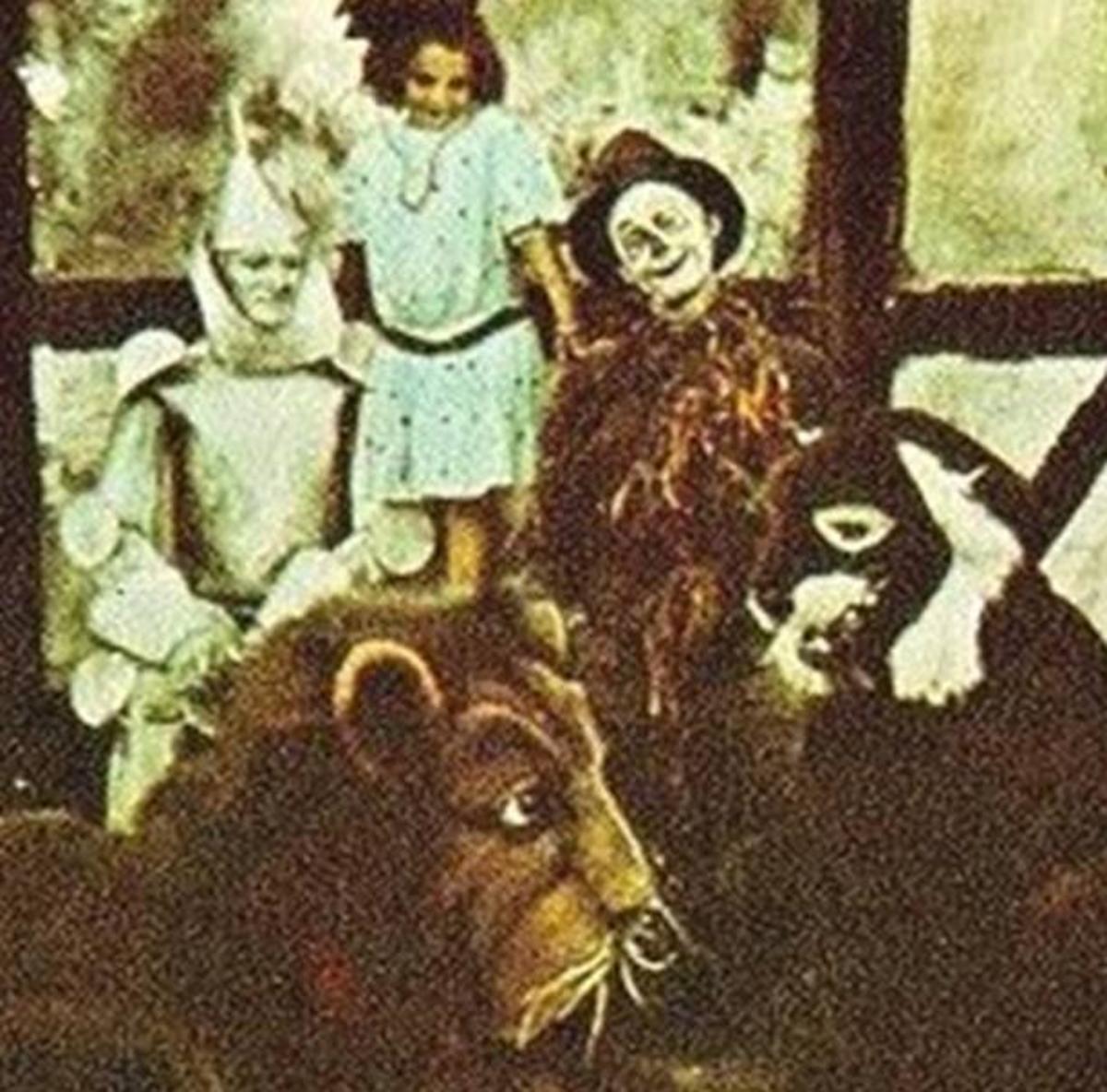 One thing I think about occasionally is the promotion that the Oz books received in their heyday. L. Frank Baum had been a salesman and a contributor to a magazine about decorating shop windows, so it’s not too surprising that he had some rather elaborate promotional concepts. I don’t know how popular the Wogglebug really was at the time of the Queer Visitors from the Marvelous Land of Oz comic pages, but it was apparently enough to inspire buttons, a card game (although from what I’ve read about it, the bug was really only on the cover and in the name), and an unlicensed ad for beer.

The Baum Bugle recently had an article about the Woozy toys made to promote the film version of The Patchwork Girl of Oz. From what I’ve heard, the Baums ended up with a lot of surplus Woozies after the movie flopped. 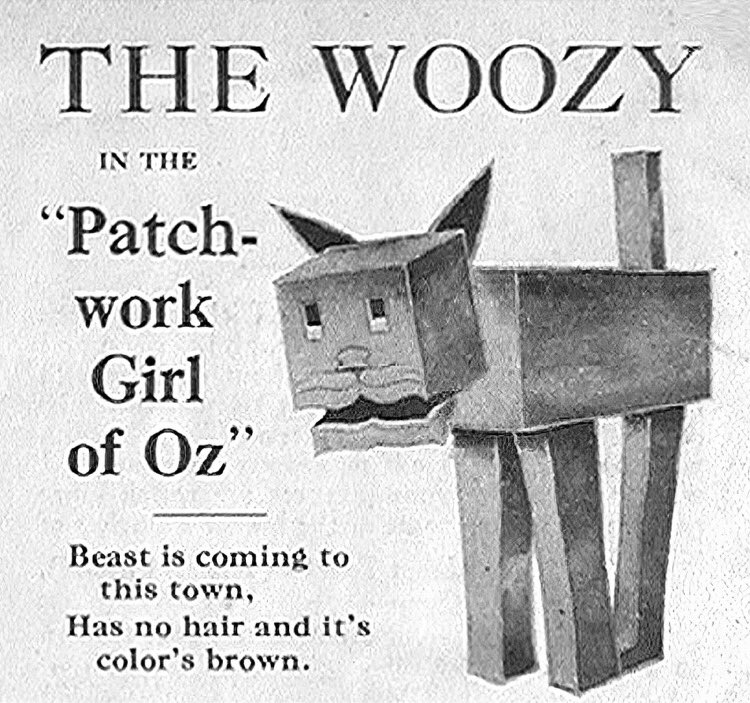 The Oz-Toy Book was released in 1915 by the publisher with John R. Neill’s illustrations but initially without Baum’s approval. The first Oz board game was released two years after Baum’s death. I’ve seen mentions of Baum claiming to have bought an island off the coast of California to build an Oz-themed amusement park. According to him, it was called Pedloe Island, but no such place existed, so it almost certainly wasn’t true. I have to wonder if he was riffing on how his former friend and collaborator W.W. Denslow really did buy an island in Bermuda, which he called Denslow’s Island. There’s a “lo” in both of them, after all. I’m not sure there was an actual Oz-themed park until 1970, when one opened at a ski resort in Beech Mountain, North Carolina.

It only ever had one ride, a ski lift modified to look like hot air balloons; and it closed in 1980. While much of it was damaged by a fire in 1975, the park still exists and some of the structures are intact, and there are annual events hosted there. When I attended my first Oz Convention in 1994, there was a presentation about a planned Oz park in Kansas City, Kansas, mostly based on the MGM movie but with some nods to the books.

I still have the concept book we received then. 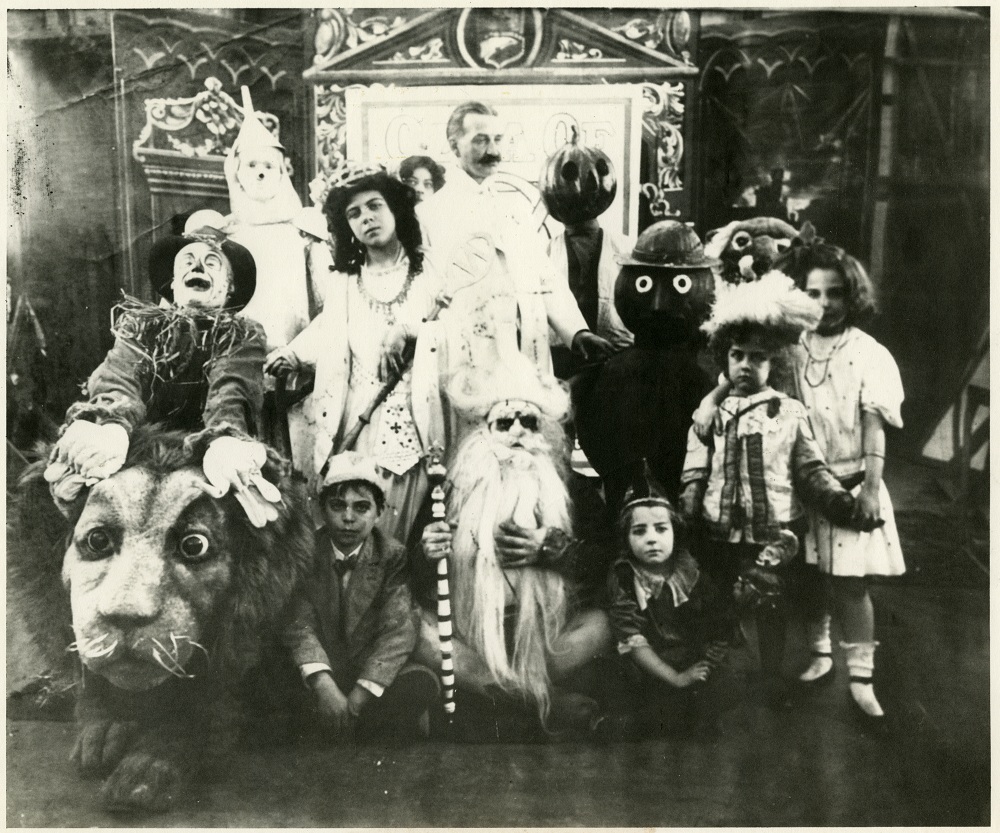 Anyway, one promotional event Baum ran himself was the Fairylogue and Radio-Plays in 1908. It was a multimedia event, hosted by Baum himself and including live actors, slides, and movies. The name was based partially on how travelogues were very popular at the time, but the “Radio” part is a little more confusing, as that wouldn’t become the preferred term for audio broadcasts for a few more years. Baum’s claim was that the slides were hand-colored using a process invented by one Michael Radio, but this was probably a joke. What I’ve seen suggests it was just something that sounded cool and futuristic at the time, despite its not making use of any radio waves. Slides previewed the upcoming book Dorothy and the Wizard in Oz, and the films, directed by Otis Turner and produced by the Selig Polyscope Company, were based on the first three Oz books and John Dough and the Cherub. It was thought at one point that the 1910 Wizard film, also directed by Turner and produced by Selig, was from this production, or at least used material from it; but such does not appear to be the case. There were apparently also two different John Dough films, both lost. According to Martin Gardner’s introduction to the Dover edition of the book, the second movie makes the prophecy that John fulfilled much more specific, referring to “an overbaked man and Cherub wee.” Also, it was given by Ozma. Dorothy in these shows was played by the young Romola Remus, who I believe was only eight years old at the time. The Fairylogue cast list includes characters from the four books, as well as several visitors to the Emerald City including a Hottentot (couldn’t they have a show back then without racism being involved?), a pirate, and Madame Tussaud. Yeah, the lady who made wax sculptures was apparently involved somehow. I hope Tanko-Mankie never found any of her museums. And while the only named Mifket in the book was Ooboo, the characters in the show include Obo, Hoko, and Joko. One of the slides was of the first known map of Oz, showing it as a square with a few locations drawn in.

I always thought it was interesting that there’s clearly a lake shown in the northern part of the Winkie Country, but it’s not there on the more detailed map from the Tik-Tok endpapers. Maybe it’s the one where Yankee’s spacecraft landed in Yankee. From what I’ve seen, the show was successful, but cost more to put on than it brought in. This was part of why Baum, who was largely funding it himself, ended up declaring bankruptcy.