You Can’t Sit at Our Table 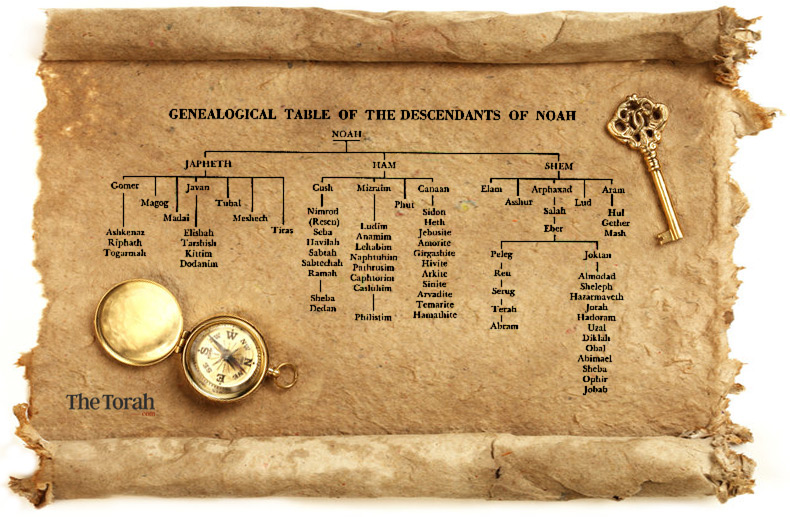 Today, I wanted to look at the Table of Nations from Genesis 10. The Hebrew word that’s usually translated “nations” is goyim, which became gentilis in the Latin Vulgate. Both words have come to mean non-Jewish people in general, and I did notice how “nations” was often used in a negative way in English translations. The context of the chapter is that, after the Flood leaves only eight survivors, they have to repopulate the entire world. Really, it’s apparently only six people doing this, as Noah and his wife aren’t said to have any other children. The descendants of the three sons, Shem, Ham, and Japheth, found all the nations of the world, or at least the ones the people writing this were familiar with.

So I guess everyone married their cousins, then got down to having children so there would be more than one person in their countries? A lot of legends refer to a single person as the founder of a place, but in reality they’d generally need some help to establish a society. A common interpretation was to associate Shem with Asia, Ham with Africa, and Japheth with Europe. This seems to have been true in a general sense, but there are some obvious exceptions, and that division of this part of the world was more of a Greek thing anyway; the early Jews wouldn’t have necessarily seen Europe as a different landmass, and the descendants of Japheth are said to have included places in Asia to the north of the Arabian Peninsula. 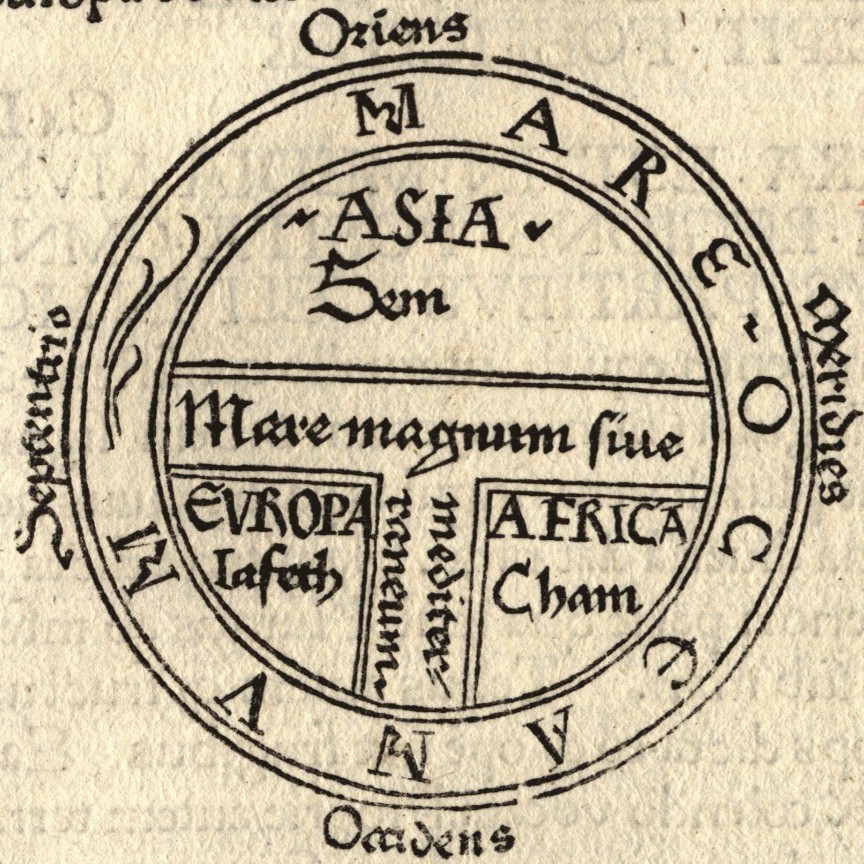 There were also attempts to tie each son to modern concepts of race, but there’s no evidence that people back then thought of things that way, and the descendants of Ham included people who wouldn’t have been Black in the current sense (or at least not mostly). Most notable is that Ham’s sons include not only names associated with Egypt, Libya, and Ethiopia; but also the Canaanites, who were cursed by Noah for reasons that aren’t entirely clear. Maybe this had something to do with Canaan being ruled by Egypt. Also, Nimrod, the son of Cush (the name of a kingdom in modern-day Ethiopia), is said to have built several cities in Mesopotamia. 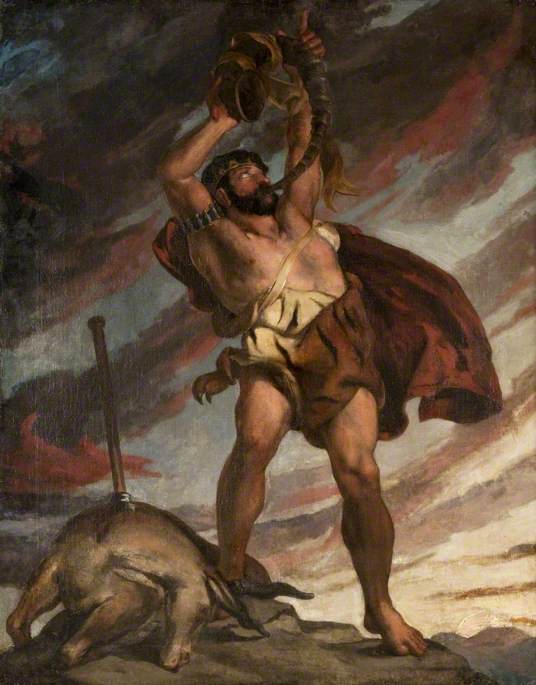 The Philistines are also said to have been descended from Mizraim, a name for Egypt.

The chapter lists seventy nations (or possibly seventy-two, but that’s another topic), which fits with the Biblical fondness for the number seven, although it’s not always clear what defines a nation in this sense. Sometimes the children of an eponymous founder would include different groups within what could roughly be considered the same nation. “Canaanites” seems to have been a catch-all for non-Jewish tribes living in the region, and one of Canaan’s sons, Heth, is generally considered to be the ancestor of the Hittites from Asia Minor. There’s apparently some argument as to whether the historical Hittites are even the same as the ones mentioned in the Bible, but the implication seems to be that the height of their empire was before Genesis had been written, so the Hittites the Jews were dealing with were remnants of the empire who had migrated into Canaan. It’s also very clear that whoever wrote this really didn’t want the Jewish people to be related to the Canaanites, despite the similarities in genetics, language, and culture. The Canaanites spoke a Semitic language, yet they aren’t a Semitic people according to this table. (By the way, “Shem” can mean “name” in Hebrew, which kind of makes it sound like Noah filled out the birth certificate incorrectly and was stuck with it.) Shem had a great-grandson named Eber, presumably associated with the Hebrews, and his descendant Abraham migrated from Ur in Mesopotamia to Canaan. So his people were the rightful owners of the land because they WEREN’T originally from there? That’s kind of confusing. Regardless, Abraham was the ancestor of the Arabs by his first son Ishmael, making them cousins of Israel. 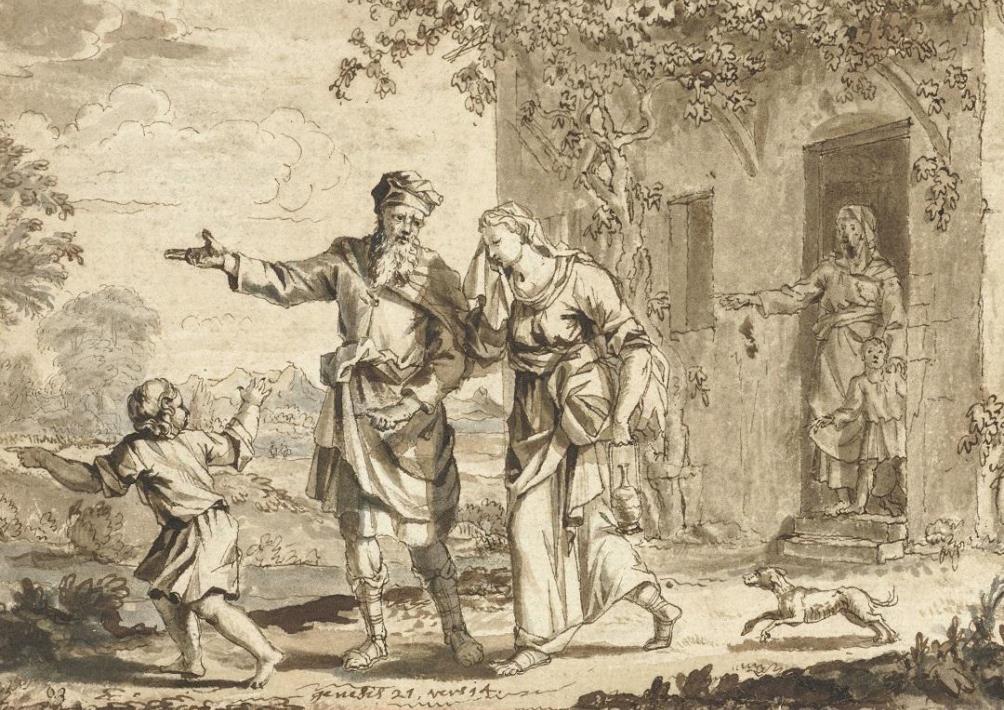 The Moabites and Ammonites were descended from Abraham’s nephew Lot through incest with his daughters, basically acknowledging that these groups were related to the Jews while still disparaging them. The Edomites were the descendants of Esau, the brother of Israel, an alternate name for Jacob. 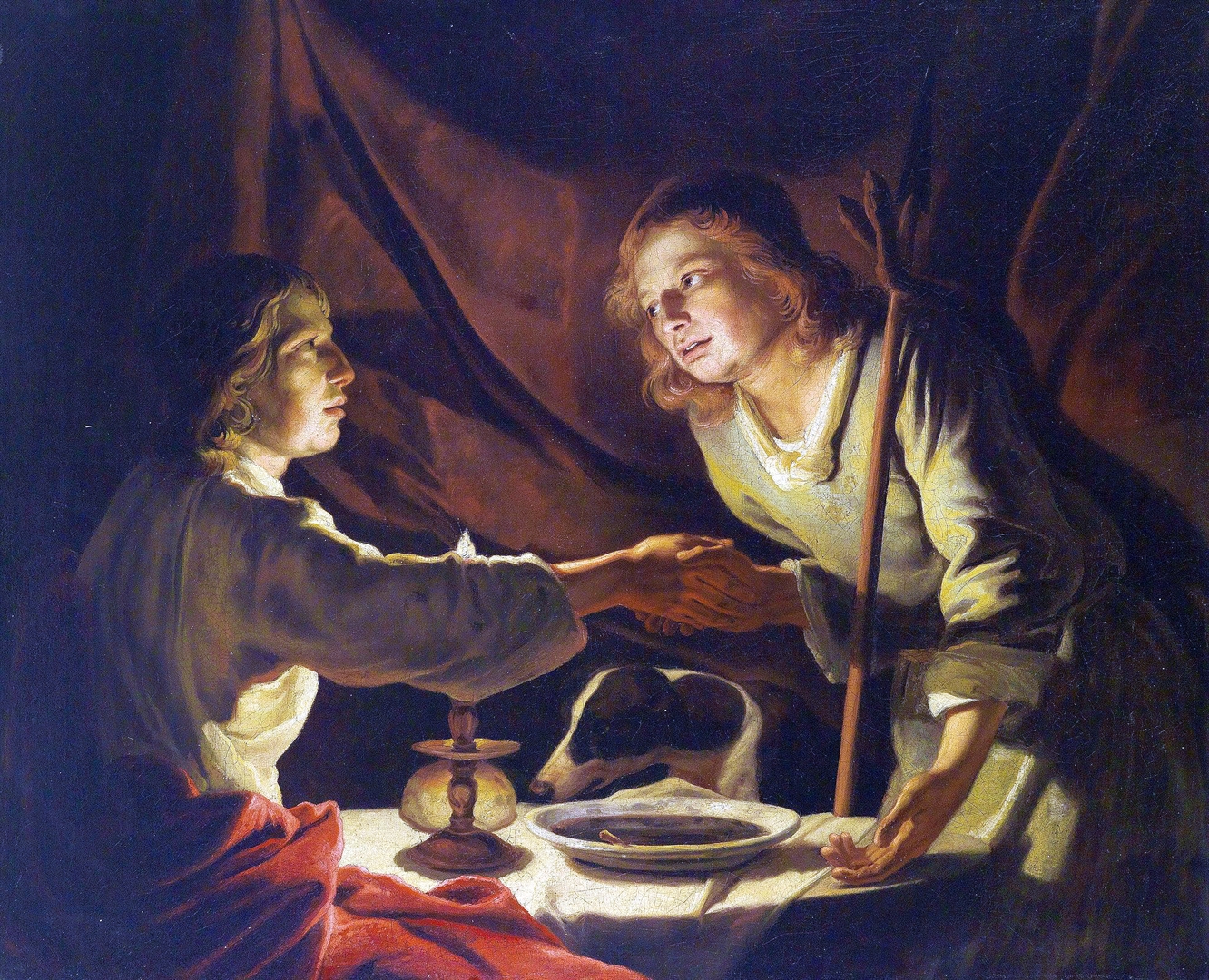 So none of these neighboring nations would have counted among the seventy. When much more of the world had been explored, Jews and Christians both tried to come up with ways to fit ethnic groups unknown to the writers of Genesis into the table. This led to the Scythians, a nomadic group thought to originate in Iran, often being considered the ancestors of pretty much all of Europe. There’s some confusion about where the Scythians themselves fall in the table, as Flavius Josephus associated them with Magog, whom I’ve elsewhere seen identified with Lydia in Asia Minor; but they’ve also been considered descendants of Ashkenaz. Either way, this is apparently related to white people being called “Caucasian,” as the pseudo-logic behind this is that these features first developed in the Caucasus before spreading northwest. I remember having a Good News Bible as a kid, and it straight-up translated “Tarshish” as “Spain,” which is possible but hardly settled. It’s sometimes identified with Tartessos, a port presumably in modern-day Spain occasionally mentioned by the ancient Greeks as a source of metals. But Josephus considered Tarshish to be the same as Tarsus, the apostle Paul’s hometown in Asia Minor; and other scholars have thought it might be another name for Carthage in modern-day Tunisia. And people still aren’t sure about what the Bible means by “Ophir,” a place elsewhere mentioned to be where King Solomon obtained gold.

I’m not sure how common this idea of modern countries and tribes having eponymous ancestors was, but it certainly appeared outside the Bible. Greek mythology has quite a few examples. Hellen, the son of the two survivors of that version of the Great Flood, was the ancestor of all the Greek tribes. The founder of Troy was named Tros, a grandson of Dardanus. In the myth of Io, she was the daughter of Inachus, a river god in Argos whose bed was usually dry because Hera was selected over Poseidon as the region’s patron deity. 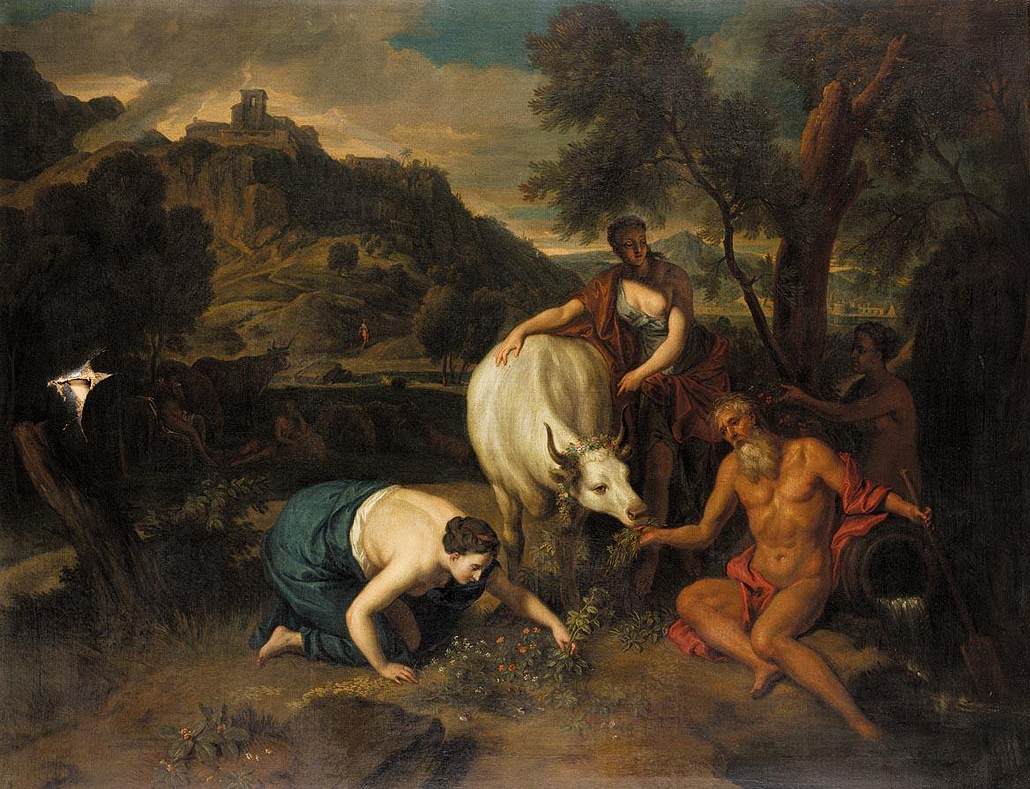 Zeus had an affair with her, then turned her into a cow so Hera wouldn’t find out, which of course she did anyway. Considering that Argos was Hera’s territory, it almost seems like he wanted to be caught. Since Hera couldn’t really do much to her husband, she instead punished Io by having her pursued by a gadfly, causing her to roam through different lands. She crossed the Bosporus between Anatolia and Thrace, hence its name meaning “cattle passage,” essentially the same as Oxford in England. William Makepeace Thackeray played on this with Bosporus University in The Rose and the Ring. Anyway, she eventually settled down in Egypt and had a son and daughter. She’s sometimes associated with the Egyptian goddess Isis, who is depicted with the horns of a cow on her head.

Io’s granddaughter Libya was the mother, with Poseidon as the father, of Belus and Agenor, and Belus the father of the twin brothers Aegyptus and Danaus. Aegyptus commanded that his fifty nieces marry his fifty sons, but Danaus fled with his daughters to his ancestor’s old homeland of Argos, then advised then to murder their cousin-husbands, only one of whom survived. 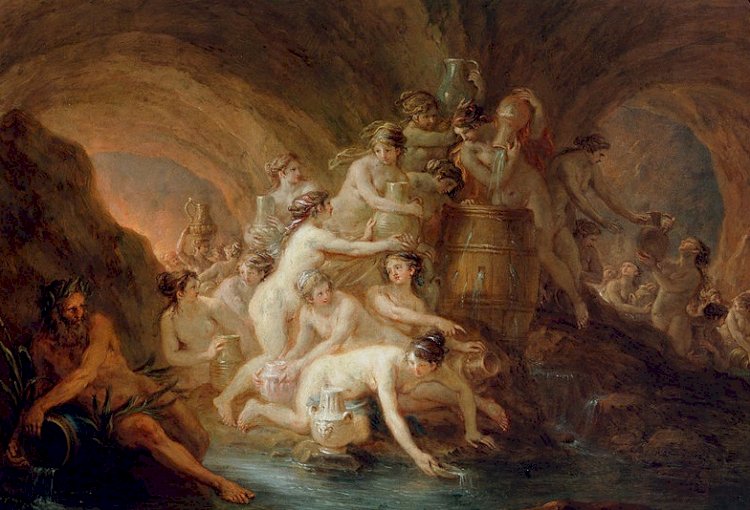 Danaus took over Argos, perhaps on the authority that his ancestor was a river there, then his daughter carried on the royal line. I’m not sure why Argos was so closely associated with Egypt, but I wouldn’t be surprised if that was used as propaganda when the Greeks conquered that country. According to mythology, it had been ruled by Greeks centuries earlier. But there are other connections between different lands as well. Belus ruled Egypt, but also founded Babylon. His brother Agenor moved to Phoenicia and ruled there, and his sons established their own kingdoms. This ties in with Agenor’s daughter Europa being abducted by Zeus and taken to Crete; her brothers went to search for her, but when they couldn’t find her, they instead settled down as rulers wherever they gave up looking. Some sources, apparently starting with Euripides, consider Cepheus to be another son of Belus. As I’ve written before, Cepheus was sometimes said to have ruled Ethiopia, but other times to have lived in Joppa in modern-day Israel. I’ve even seen it suggested that this was specifically to connect to the Bible, as Joppa is also where Jonah boarded a ship bound for Tarshish (see how this all connects?), and his story also involves a sea monster.

The Greek Septuagint even uses the same term, ketos. So there’s the same connection between Africa and the Arabian Peninsula that showed up with Nimrod. It might have had something to do with Egyptian control over the region, but who knows? Perseus, a descendant of Danaus and Prince of Argos, and Andromeda, daughter of Cepheus, had a son named Perses who was the ancestor of the Persians. According to Herodotus, King Xerxes tried to take advantage of this supposed relation to the Argive royal family by bribing them, although it didn’t work out. Perseus was also credited as the founder of Mycenae, and according to later sources of Tarsus as well. Another weird association I came across is that early historians apparently identified the Titan Iapetus, father of Prometheus and Atlas, with Japheth, even though they

1 Response to You Can’t Sit at Our Table