It’s weird how the Irish religious festival of St. Patrick’s Day became mostly a day for drinking a lot here in the States, but that’s how these things often work. I don’t drink that much, but I did wear green, even though I’ve been told my Irish ancestors were actually Scots-Irish Protestants. I don’t think I own any orange shirts except for T-shirts, though. Aside from the drinking and the color green, St. Patrick’s has also absorbed some things Americans tend to associate with Ireland, like leprechauns and corned beef, even though the latter is specifically Irish-American. But anyway, I thought it would be a good time to look at some Irish mythology, and one group that keeps showing up throughout the mythical history of the Emerald Isle is the Fomorians. What’s not entirely clear is what the Fomorians are, aside from just the formidable enemies of everybody else.

They’re often regarded as giants, and as having various deformities. One description refers to them as having one eye, one arm, and one leg each, which must have made moving around difficult. They’re also sometimes said to have human bodies and goat heads. I’ve come across some mentions that they would kill any children born without deformities, although I guess that’s a bit of a judgment call. 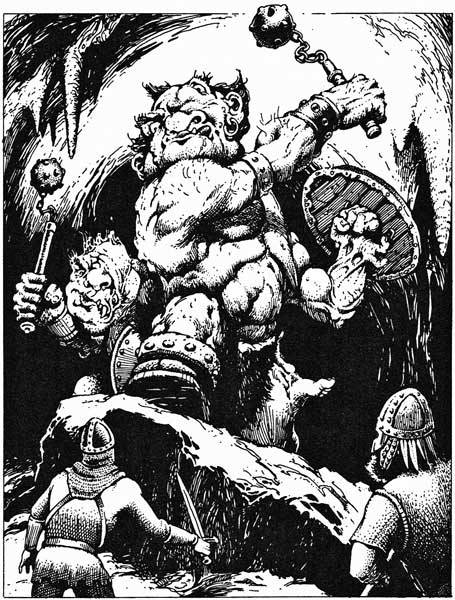 It reminds me of how Leela on Futurama is the least mutated of the sewer mutants. Their name has been interpreted as meaning that they’re either from the underworld or the sea, and they eventually became closely associated with Vikings. A seventeenth century book says that the Formorians were Canaanites who fled across the sea from the Israelites. They were shepherds who were unfamiliar with agriculture.

When other groups of people came to settle in Ireland, they usually came up against the Fomorians. There’s an book compiled in the eleventh century, the Lebor Gabala Erenn, that tells of six successive waves of colonization of the Emerald Isle, but this doesn’t include the Fomorians themselves. They might have arrived after Cessair, said to be a hitherto unknown fourth son of Noah; but were definitely around when Partholon brought settlers from the Iberian Peninsula. These settlers defeated the Formorians in battle, but were later decimated by plague. The leader of the Fomorians at that time was named Cichol Grichenos, the epithet possibly meaning he had withered feet. The next settlers were led by Nemed, who is said to have been Scythian, but also a descendant of Partholon. Nemed defeated the Fomorian rulers Gann and Sengann, but their successors, Conand and Morc, imposed a tribute of two-thirds of the Nemedians’ children, grain, and cattle. Nemed’s son, Fergus Lethderg, destroyed Conand’s tower on Tory Island, the most remote inhabited part of Ireland, but most of the Nemedians were killed either by sickness or in the ensuing battle, after which they fled the place. Their descendants, the Fir Bolg, who had been living in Greece, later came back to Ireland, with there being no record of their having any conflict with the Fomorians.

The next group of settlers are the famous Tuatha De Danann, often thought to be gods who underwent a demotion in the Christian era. They conquered all or most of the land from the Fir Bolg, but since their king, Nuada, had lost an arm, he was succeeded by a guy named Bres. He was actually half-Fomorian, the result of a tryst between the mother goddess Eriu and a Fomorian prince named Elatha, who was, strangely enough, described as beautiful.

But then, maybe Fomorian beauty standards changed over time. Bres turned out to be on his father’s side, forcing the Tuatha De into slavery to the Fomorians. He was forced off the throne and his father refused to help him, but he did receive the assistance of the most famous of the Fomorians.

This was Balor, known for his evil eye. It was incredibly difficult just to lift his eyelid, but even opening it a bit caused destruction, and the full force of it was obviously much worse.

He was defeated in battle by his grandson Lugh, who was associated with the Sun, war, and arts and crafts. Parallels have been drawn to the similarities between the struggle of the Tuatha De and Fomorians with that of the Olympians and Titans, and the Aesir and Jotnar. In both cases, the older gods were associated with chaos and primordial forces, and often but not always described as hideous giants. They were overthrown by the new gods, but there remained some amount of interaction between the two populations, and sometimes they had relationships and children together. Indeed, the Fomorians were apparently still around in the time of Cuchulainn in the first century BC, demanding the first-born son of a local king in tribute every seven years. This was early on in the hero’s career, and he killed the three Fomorian princes who came to take the prince. I suspect the Fomorians stuck around because they had a fear of missing out.