Standing Tall on the Wizard’s Dreams 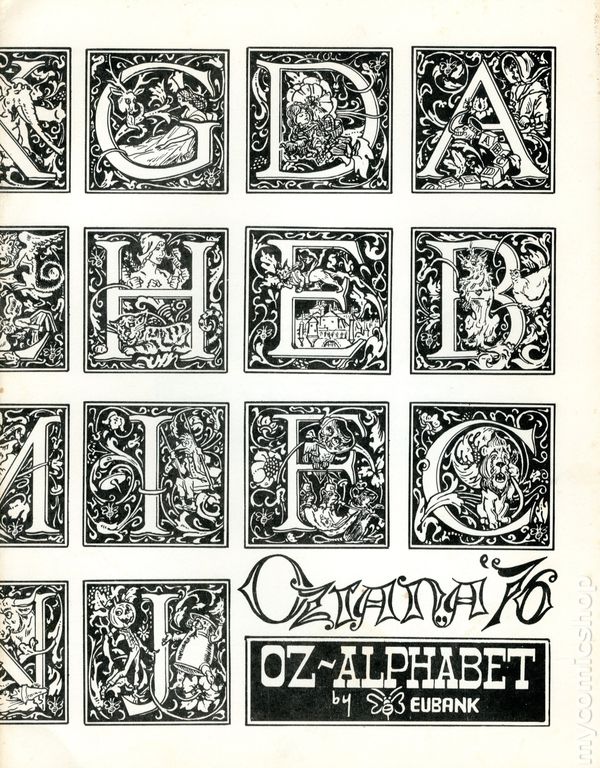 The 1976 Oziana is the first with Jay Delkin as editor. The cover has an Oz alphabet designed by Bill Eubank. I know The Baum Bugle used these to start articles for a while, and at the time I was curious about the alphabet as a whole, since a lot of letters aren’t used quite as much. Each one has one or more characters that start with the letter, except for X, which has Ozma kissing Dorothy. I guess X. Pando wasn’t a significant enough character to merit his own letter, although apparently I-wish-I-was…was.

“How the Wizard Came to Oz, and What He Did There,” by Donald Abbott – This is an early draft of a story that was later published by Books of Wonder, and more recently reworked into a comic. I briefly compared the story to the book, and there’s quite a bit that’s the same, although the book obviously goes into more detail. One thing I noticed in the Oziana story that wasn’t in the book was that the Ozites specifically thought the Wizard might be Ozmonga, an earlier ruler who had left the land in a flying machine ages earlier. The explanation for how the Wicked Witch of the West obtained the Golden Cap, found in all three versions of the tale, is different from the one given in David Hulan’s “The Gauds of Oz,” although I guess this one was first. Abbott illustrated all three versions in different styles, with the pictures in the book being an imitation of W.W. Denslow, like most of his BoW work.

“The Adventure of the Cat That Did Not Meow in the Night,” by Jay Delkin and Eric Shanower – This is the first published Oz story by Eric, who was a child at the time. From what he’s said about it, it was originally called “A Mystery for Ojo.” Ojo doesn’t even appear in the finished version, which was heavily rewritten. This is the first of the Great Detective stories, about an Ozian equivalent of Sherlock Holmes. Joe Bongiorno’s theory is that it’s actually Holmes himself, who came to Oz to live when he grew old. The mystery involves a Nome who was stuck in Oz when Ozma filled in the tunnel their King had used to invade back in The Emerald City of Oz.

Of course, the tunnel reappears in Shaggy Man, but that’s another issue. We find out from the Detective that the Emerald City has had electricity since 1880, when some filaments blew across the Deadly Desert, which fits with Michael Patrick Hearn’s suggestion that the light in the roof of the Wizard’s throne room in Wizard was electrical. Also, there’s a redwood tree in the city, which can be seen from the first branch of the Winkie River. While Eric is largely known as an illustrator, he didn’t draw the pictures for this one. That would be Melody Grandy, who went on to illustrate the other Great Detective stories as well. I remember seeing it mentioned that she intentionally drew the character with a top hat instead of a deerstalker to avoid potential copyright problems.

“The Lost Sawhorse,” by Phyllis Karr – Karr is an author who went on to write a lot of non-Oz stuff as well, although I can’t say I’ve read any of it. This story is another mystery, and one that would be pretty gruesome if it weren’t for the Sawhorse’s particular circumstances. When Dorothy and the Sawhorse find him missing, they discover in the Magic Picture that he’s at a particular Winkie cottage where the Tin Woodman had recently chopped firewood. The tale mentions that the wooden horse’s groom is named Jojee, while in Onyx Madden’s Mysterious Chronicles, he was called Bee Zum. He could certainly have had more than one, however. Nathan Flower’s pictures for this one are in a more realistic style than those for “The Threat of Civil-Oz-Ation,” but I do notice that he drew quite a few characters from the back.

Eubank contributed another Oz-E-Gag comic to this issue, crediting Richard Paul Smyers with the idea. It’s based on the drawing of Jack Pumpkinhead’s house from Road, with a guest appearance by Linus Van Pelt and Snoopy. There’s also a picture of the Magic Flower from Magic drawn by Bronson Pinchot, and yes, that’s the guy from Perfect Strangers. From what I’ve heard, he organized a few Winkie Conventions in the seventies. I recently found out that Mypos, the wacky Greek island his character on the show came from, literally means “maybe,” which itself sounds like something that could have been in an Oz book.

1 Response to Standing Tall on the Wizard’s Dreams