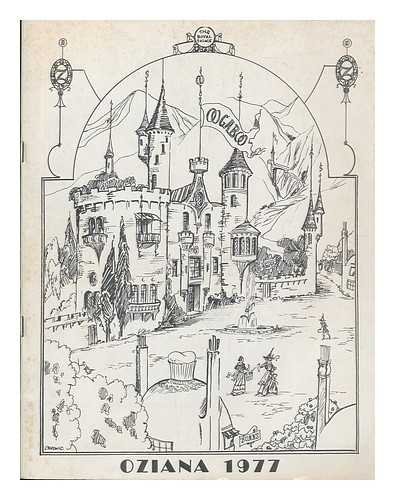 We’re now up to the Oziana from the year I was born, 1977. The front cover shows the royal palace of Oogaboo, as drawn by Albert Chronic. The introductory page has a political cartoon by Bill Eubank that isn’t really that political, just a joke on the symbols of the two major American political parties and the former occupation of the then newly-elected President.

Then there’s a seek-and-find by Dennis Anfuso, with the picture showing Tip and company meeting the Wogglebug in The Marvelous Land of Oz. And after all that, we get to the first story, which is:

“Glinda and the Red Jinn,” by Robert R. Pattrick – This tale cleverly fits together what we know of the Red Jinn to provide him with a credible origin story, that he was originally a potter and minor magician named Juggins who studied under Glinda, and how he chose his current jar-clad form. Bill Eubank provides illustrations of the character both before and after.

There’s a hint of his more sinister, unpredictable side when he admits he’d enjoy being a wicked wizard, although he decides against it. The story briefly implies that Jinnicky’s servants were magically created, making their enslavement somewhat less troublesome, but not completely as they’re presumably still conscious beings. I find it interesting that Glinda’s transformation of the wizard includes a chant mentioning “powers old and forces dread,” which seems a little out of character for her. There’s a conceit to the story that Pattrick found the manuscript inside an old Oz book at a bookstore. There are mentions of Smith and Tinker having left Ev, and of the royal family being enslaved by the Nome King, which suggests it takes place not long before Ozma. I suspect Jinnicky has been at work for much longer than that, though, and in Yankee he says he’s been practicing red magic for 200 years.

“What If They Had Taken the Other Path?”, by Jay Delkin – This is a what-if story based on Dorothy and the Wizard, in which the characters have a choice between two paths out of the Dragonettes’ cave, and end up within sight of the surface but unable to reach it. Delkin here proposes that the other path leads to the Nome Kingdom, which isn’t that unlikely. I recently realized that it’s kind of strange that L. Frank Baum wrote two Oz books in a row where Dorothy visits subterranean countries. When I first read this, I thought the mention of Rinkitink meant the events of that book would somehow come into play, but they don’t; it’s just another example of a resolution the author found unsatisfying. It would be another forty years or so before Oziana would deal with that. Incidentally, Melody Grandy’s Disenchanted Princess has Tip take the other path from the cave, and comes to the dragons’ treasure hoard and eventually to the surface of Boboland. Dave Billman provides an illustration for this story of the characters traveling through a cavern, and another one with Dorothy and the Wizard encountering a dragon appears on the back cover.

“Two Friendships,” by Stanley Worden – There are some interesting ideas in this story, but I find the writing a bit sloppy, to the point where it’s hard to remember just what happens even after having read it a few times. It involves a hyena dropped by an Ork into a glen that makes him grow to giant size, and he forms an alliance with Xew, chief of the small, bad-tempered Hotsnaps, to conquer the Emerald City with some clay that slows things down. They don’t actually get anywhere, though, as they’re soon thwarted by Button-Bright and Polychrome, presumably the second friendship from the title. There’s also a tribe of discarded mechanical parts, and a device called the Ski-Dad’l that used to belong to one of the Pops from the Lolly-Pop Village introduced in Scalawagons.

I assume Chronic’s picture of Button-Bright holding his Magic Umbrella on Red Top Mountain is artistic license, as he presumably wouldn’t have gotten lost in the first place if he’d had that.

“A Map for Ruth Plumly Thompson,” by Ruth Berman –  This short poem is a tribute to the second Royal Historian, who had died the previous year. It references the many locations Thompson visited in her books, and mentions how she brought Santa Claus on a sea voyage in The Curious Cruise of Captain Santa. The introduction says that the poem “originally appears in Loki 13,” but I can’t find any reference as to what that was. I know it was later reprinted in The Baum Bugle.