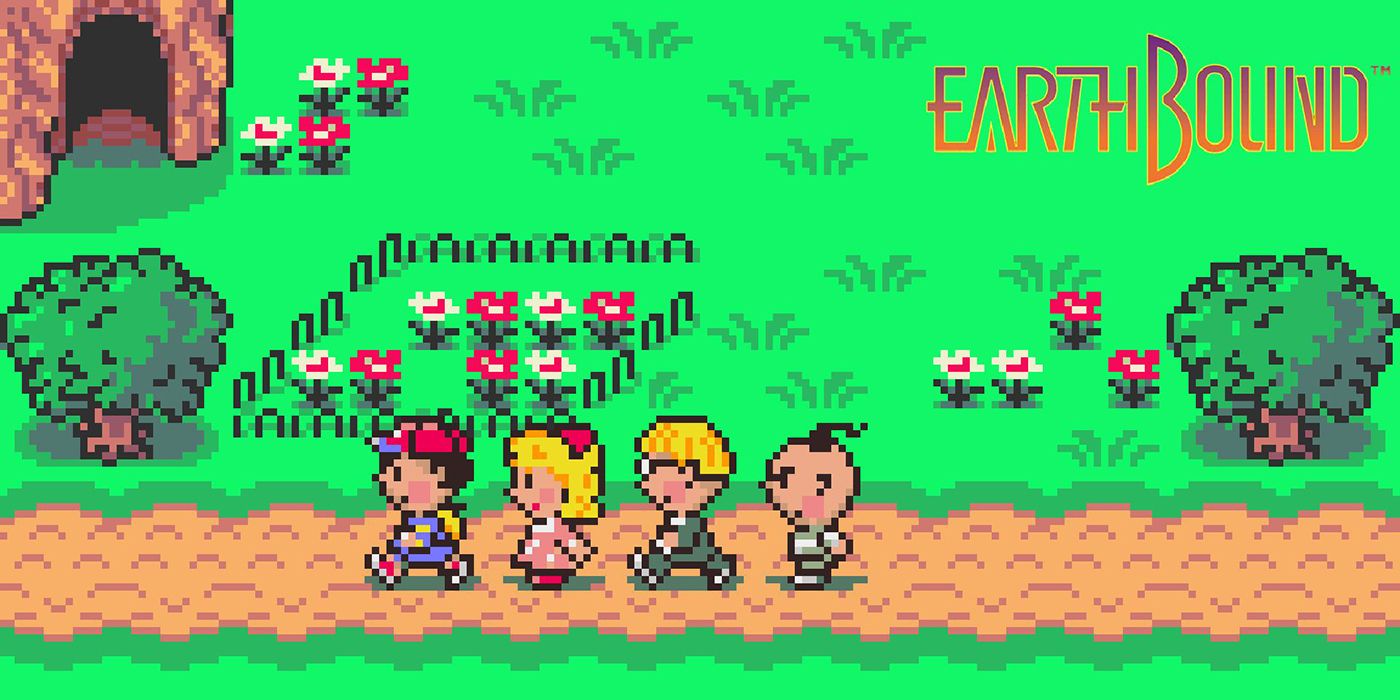 I started playing EarthBound last week when I found it on the Super NES for Switch application. It probably wasn’t the best timing as the Switch version of Chrono Cross also came out that week, but I’ve been switching back and forth, also checking in on my Animal Crossing island occasionally. I remember first being aware of the game through Nintendo Power back when it was first released in the United States, but the description didn’t really stand out enough to make me check it out back then. I know a lot of people love it, though, and I’m an RPG kind of guy, so I figured I should give it a try. It’s actually the second game in the Mother series, but the first one to be released outside Japan. There was eventually a port of the first game as EarthBound Beginnings, but the third one still hasn’t been officially translated. I think I remember EarthBound being described as an RPG set in an everyday world, which is…sort of true. It does have a modern setting instead of a high fantasy or science fiction one. There are ATMs, drugstores, telephones, cars, buses, and policemen. Weapons you can use include baseball bats, frying pans, and popguns. The previous game called the setting of the game America, but this one changes it to Eagleland, which definitely sounds much cooler. There are equivalents of other real-world places as well. Most recently, a part set in Winters refers to Stonehenge and a being similar to the Loch Ness Monster. 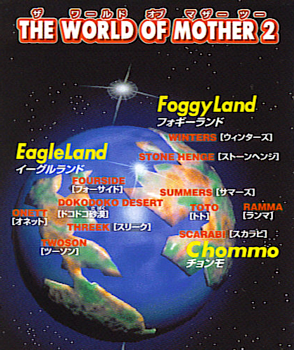 But the presence of everyday things doesn’t mean the game is in any way normal. It starts out with a meteor landing in the suburbs of Onett, hometown of the main protagonist Ness. There’s a magical bee inside who wants to guide you to fight an evil alien, but he’s soon crushed by Ness’s nasty neighbor. Soon, you have to beat up a bunch of cops, and instead of getting in trouble for it, they respect you and let you travel to the next town. 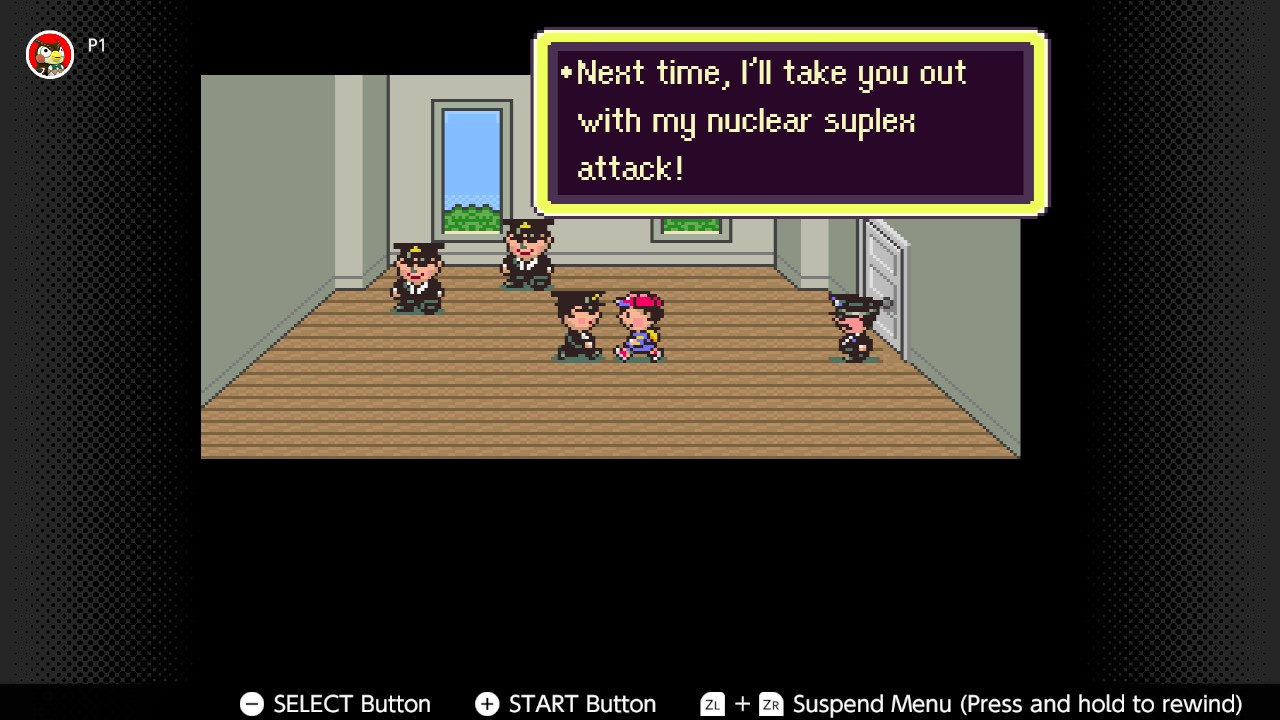 Your second party member, Paula, has been kidnapped by a cult that wants to paint everything blue. 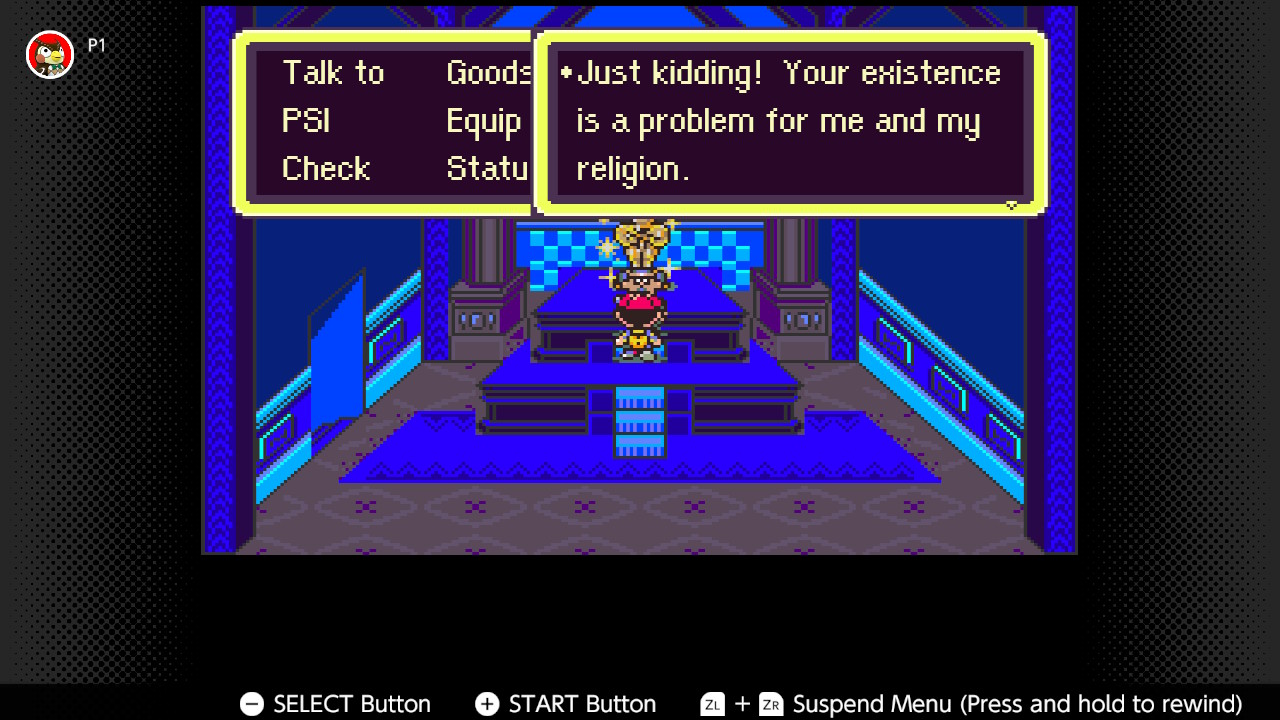 Another town, Threed, is haunted by ghosts and zombies, under the leadership of someone called Mr. Belch. I leveled up Ness quite a bit before saving Paula, so she was pretty far behind in her statistics. Most recently, my party has been locked up, and the game switched control to Jeff Andonuts, a scientist’s son who attends a boarding school, and almost immediately gets a bubblegum-loving monkey to help him out in battle. 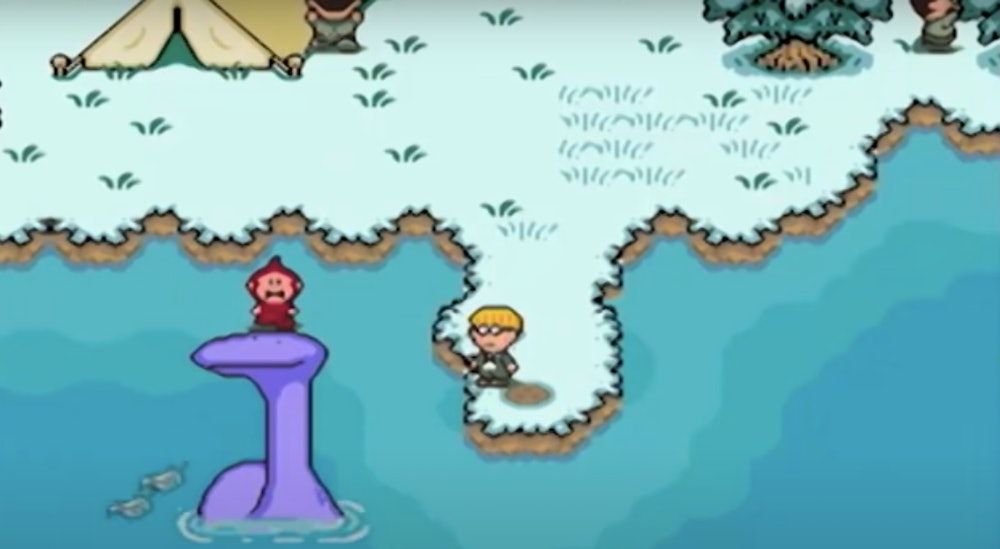 The last party member is called Poo, and I’d say that was a bad translation, but there’s a lot of gross-out humor in the game anyway. I suppose Poo could be a name in a world where Mr. Belch and Master Barf live.

You fight enemies when you run into them or them into you, and they’ll get the first strike if they come up behind you. While you keep seeing a lot of the same enemies, there is some interesting variety. I’ve encountered crows in sunglasses, gang members, mushrooms that can affect your movement with spores, hippies, businessmen, flying saucers, and ghosts. 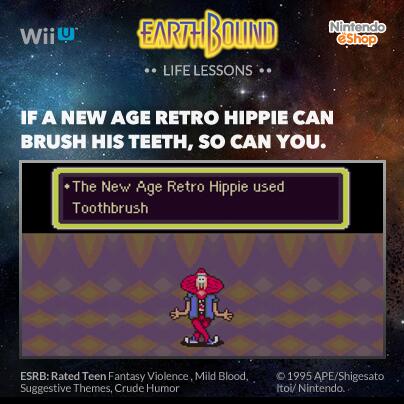 There are even a few different battle themes, a less common one using a surf riff. While the mechanics are the same regardless of what you’re fighting, there are some interesting textual differences when you win. Beating a normal animal or a human makes them “tame” or turns them “back to normal,” the indication being that they’re brainwashed, while you actually destroy aliens and robots. While battle is turn-based with a command menu, there is an unusual mechanic with a meter rolling when you gain or lose hit points. If you can heal or finish the battle before it reaches zero, you can keep a character alive even when they’ve received what would normally be a mortal blow. If you raise your level enough, you can defeat an enemy without actually fighting. Most of the characters also have psychic abilities that work like magic spells in other games. 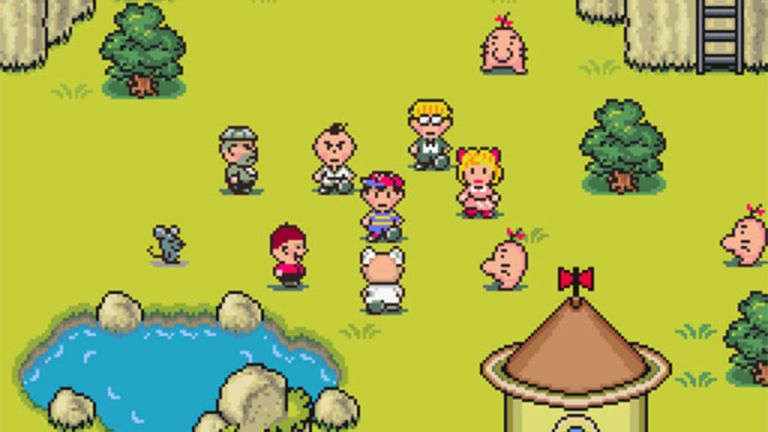 Graphically, the game shows some influence from Charles Schulz, with this hint guy being pretty obvious proof. 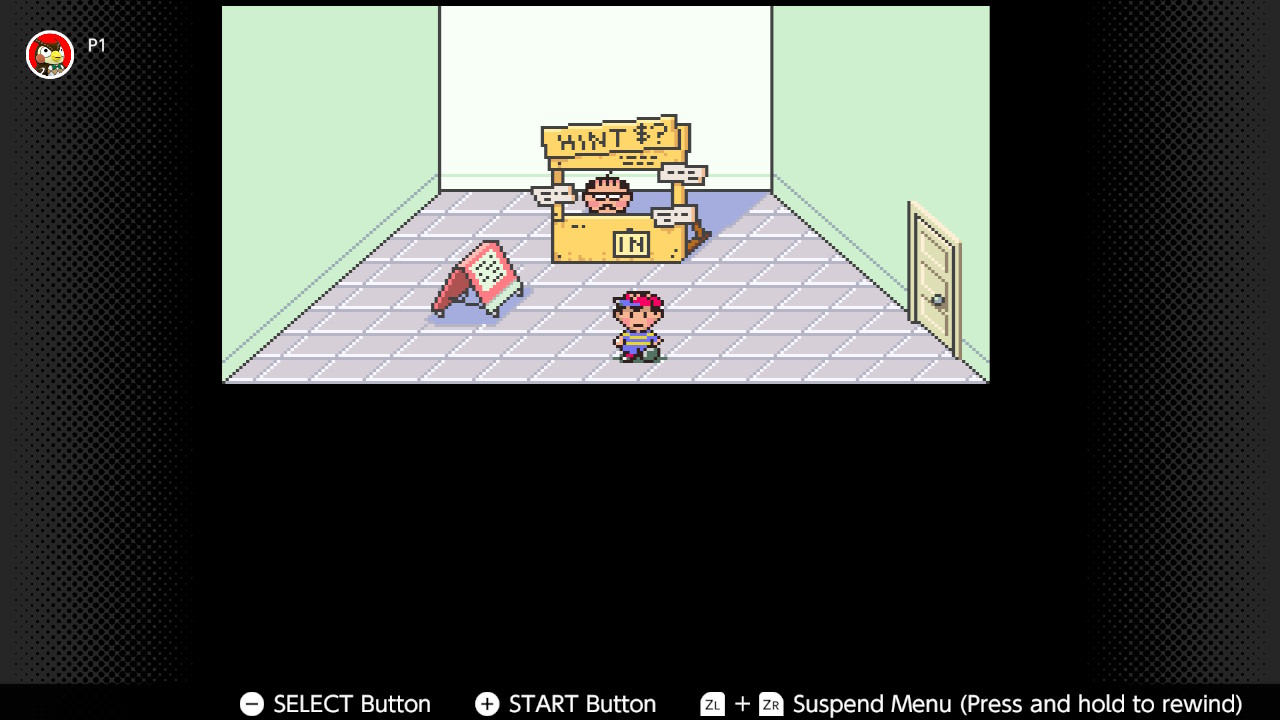 I also noticed some similarities to Maniac Mansion: ordinary kids with extraordinary abilities being thrust into a weird adventure, people being brainwashed after a meteor lands, and having to use both common and strange items in unexpected ways. They both even have a blond kid named Jeff who fixes things, although their personalities are quite different. 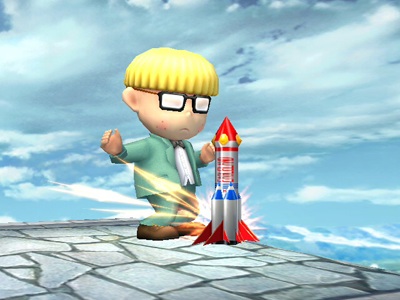