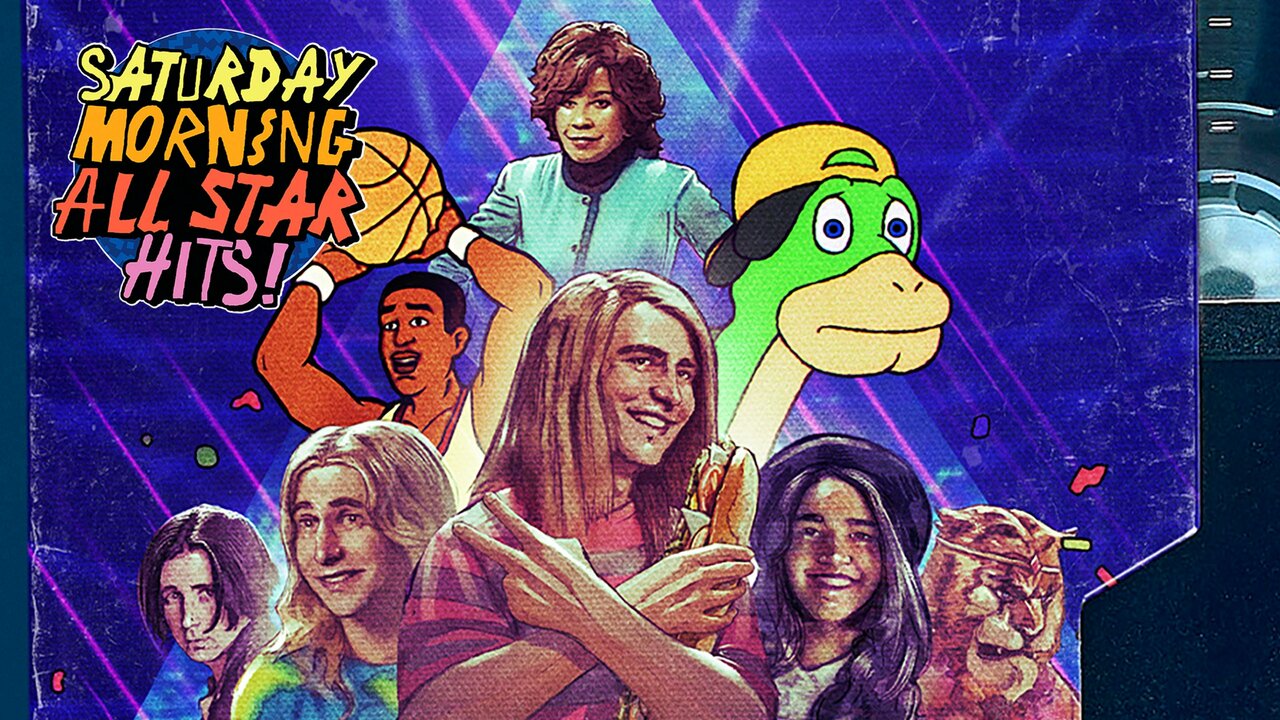 Saturday Morning All-Star Hits! – This was something Beth had heard of, an eight-episode Netflix series spoofing cartoons from the late 80s and early 90s. In addition to the cartoons themselves, there are some subplots that develop throughout the show. The two hosts, twin brothers Skip and Traybor, both played by co-creator Kyle Mooney, have a falling out when one becomes more popular than the other for no discernable reason. They’re mostly a parody of Chip and Pepper, whom I remember hosting the Saturday morning block when the Super Mario World cartoon was on the air. They weren’t the only obnoxious teenage hosts who were supposed to be cool, though; they even did that with reruns of the Super Mario Bros. Super Show cartoons. We also got bits of news about a troubled teenage star who’s accused of murder. And both themes are addressed in a cartoon about the less prominent brothers of famous pro athletes, created by the teen star’s less prominent brother. There are generally dark twists to the cartoons. A parody of Denver, the Last Dinosaur has a dinosaur who skateboards, plays guitar, and hangs around with a group of kids, but he’s also clinically depressed. An artist hangs out with magical creatures who live in his shed, but he thinks his wife will leave him if she finds out about them, and they have a drug problem. Another one has animal warriors from space who try to foster peace by beating people up, and the show is eventually taken over by Skip. A parody of Bobby’s World and similar shows is hosted by a comedian who’s too abrasive and can only imagine one thing. There are even spoofs of Bubble Tape commercials, and products like the Power Glove and Madballs. For such a short show, they really packed it full of references.

Arrested Development, Season 5 – We finally got around to watching these episodes, which premiered way back in 2018. Why the delay? I couldn’t really say. I assume this will be the last season, since Jessica Walter died and Jeffrey Tambor admitted being abusive to her on-set (and this was AFTER he was fired from Transparent for sexual assault allegations). You’d think he’d want to lie low after that, but it seems like no one ever does that. Hey, I notice they didn’t use Scott Baio or Jeff Garlin this season. Can actors just stop doing terrible things? While the fourth season was made with each episode focusing on a particular character so they wouldn’t have to all work at the same time (although I understand there was an edited version I never saw), this one returns to having most of them together and Michael being the central character. It picks up where the previous season left off, with Lucille Austero missing, the Bluths trying to build a border wall, Lindsay running for Congress, and George Michael stuck in a lie about having developed privacy software. The thing is, Lindsay is only in a few episodes, and while her subplot is resolved, it’s largely without her being there. I have to suspect they intended to devote more time to it, but couldn’t for whatever reason. I also assume they couldn’t get Liza Minelli, which is why she only appears in old footage. It takes place in 2016 (I think?), which is a quiet retcon; but it’s probably better that they just went with that instead of explaining away a time skip like they did in the fourth season. I suppose they couldn’t resist taking a few shots at Donald Trump’s campaign, all obviously made in hindsight. It did allude to how Trump pretty much took credit for the idea of building a wall even though it was pretty standard Republican rhetoric even before that, as evidenced by the show making jokes about it 2013. I also expected there to be an explanation, or at least a joke, for how Tobias, who spends this season trying to fit into the Bluth family with Lindsay no longer around, would have an illegitimate son. By the way, the son, Murphy-Brown, is played by Kyle Mooney, so both of the shows I’m writing about in this post have something in common. They also both have someone caught dumping something in the ocean in the background of something unrelated. I’ve seen some reviews that said this season made the show largely about itself, which it always was as long as it had a self to reference, due to its format. Still, it does feel a little more self-contained, with less commentary and parody on current events and media. The plots are still convoluted, but on a smaller scale. Maybe I’m not being fair, since it has been a while since I’ve seen any of the earlier episodes, but that’s kind of how it felt. Still, it was funny in basically the same way it’s always been. There were quite a few “hey, remember this?” lines, but they worked because they were usually someone reminiscing very casually about a really messed-up event. For that matter, that’s kind of what they did with the ending, too. There were a few other things I thought of, like how Dusty’s yuppie beach bums kind of connected to the Mexican Romneys in that they were both rich white guys playing at being tough, but this is probably long enough already. But I will mention that Jessica Walter was in the premiere episode of the second season of the 1970s Wonder Woman (or the third, according to HBO Max), and she even plays a character who’s underhanded and drinks a lot.