Tell Me About the Dragons, George

I had a few other things I wanted to write about, but since I found out Saturday was St. George’s Day, I thought he might be worth looking into. As someone who didn’t attend a church where saints were really a thing, I pretty much just knew him as the guy who killed a dragon. That’s basically how he’s used in popular culture. What’s weird is that the dragon thing actually wasn’t part of his story until the twelfth century, when he supposedly died near the beginning of the fourth. I also tend to associate him with England, of which he’s the patron saint, but he likely didn’t go anywhere near there in his lifetime. He’s also, as per Wikipedia, the patron of Ethiopia, Georgia, Catalonia, Aragon, and Moscow. Not only is he venerated by the Catholic, Orthodox, and Anglican Churches, but even by Muslims. He was of Greek ancestry, born in Cappadocia, in what is now Turkey. He’s said to have served in the Praetorian Guard, and was martyred on 23 April 303 for refusing Emperor Diocletian’s order to sacrifice to the Roman gods. From what I’ve found from admittedly fairly minimal research, the earliest sources say he was beheaded, but there came to be many different accounts of his death, which led to a composite tale of his dying multiple times, or at least being tortured and coming close to death a few times. It appears that he died in Nicomedia, but his body was taken to Lydda in Palestine, and his head to Rome. Or maybe he was killed in Lydda in the first place. Two of his fingers and part of his skull and heart were supposedly once kept in Windsor Castle. Everybody wanted a piece of this guy. It appears that he became particularly popular during the Crusades, and King Edward III of England dedicated the Order of the Garter to him. 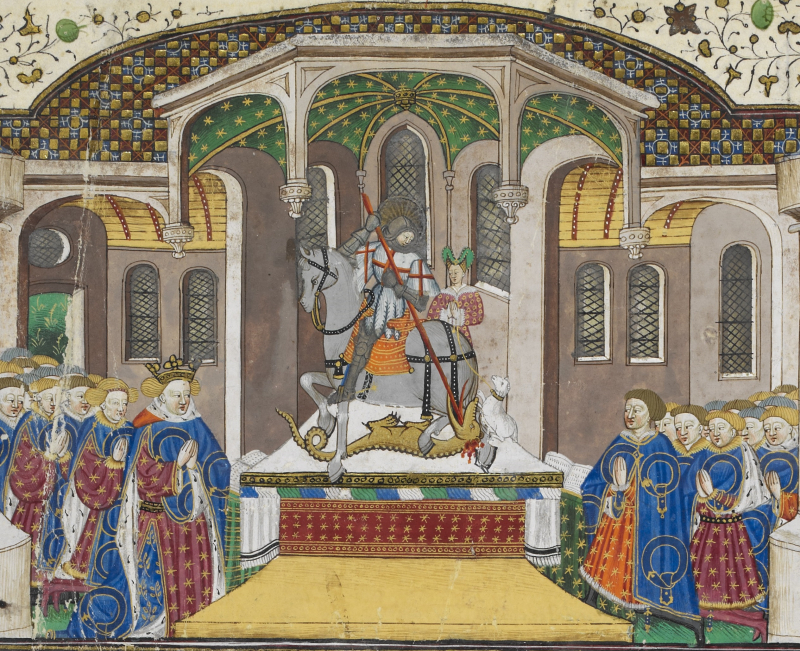 Since he’s said to have been a military man, he came to be associated with knights. 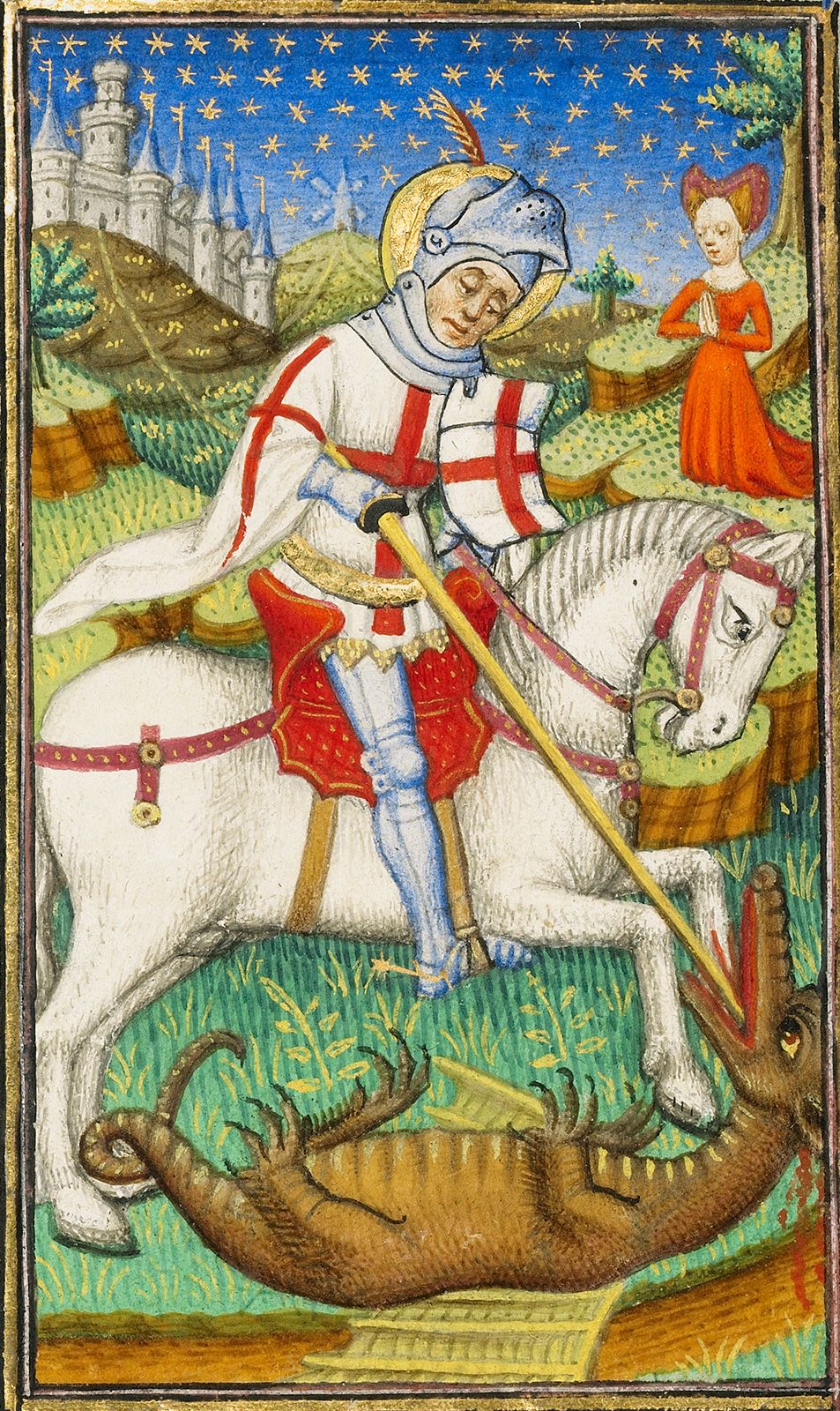 The dragon seems to have come into it around the twelfth century, the battle having taken place in Libya, where a dragon with noxious breath was polluting the local source of water. The people gave sheep to the monster to keep it at bay, but eventually had to switch to humans instead. When the king’s daughter was selected by lot as the next sacrifice, George happened to be passing by. He wounded the dragon with his lance, then had the princess tie her girdle around its neck, making it meek. Leading it back to town, he killed it in exchange for the people’s promise to convert to Christianity. 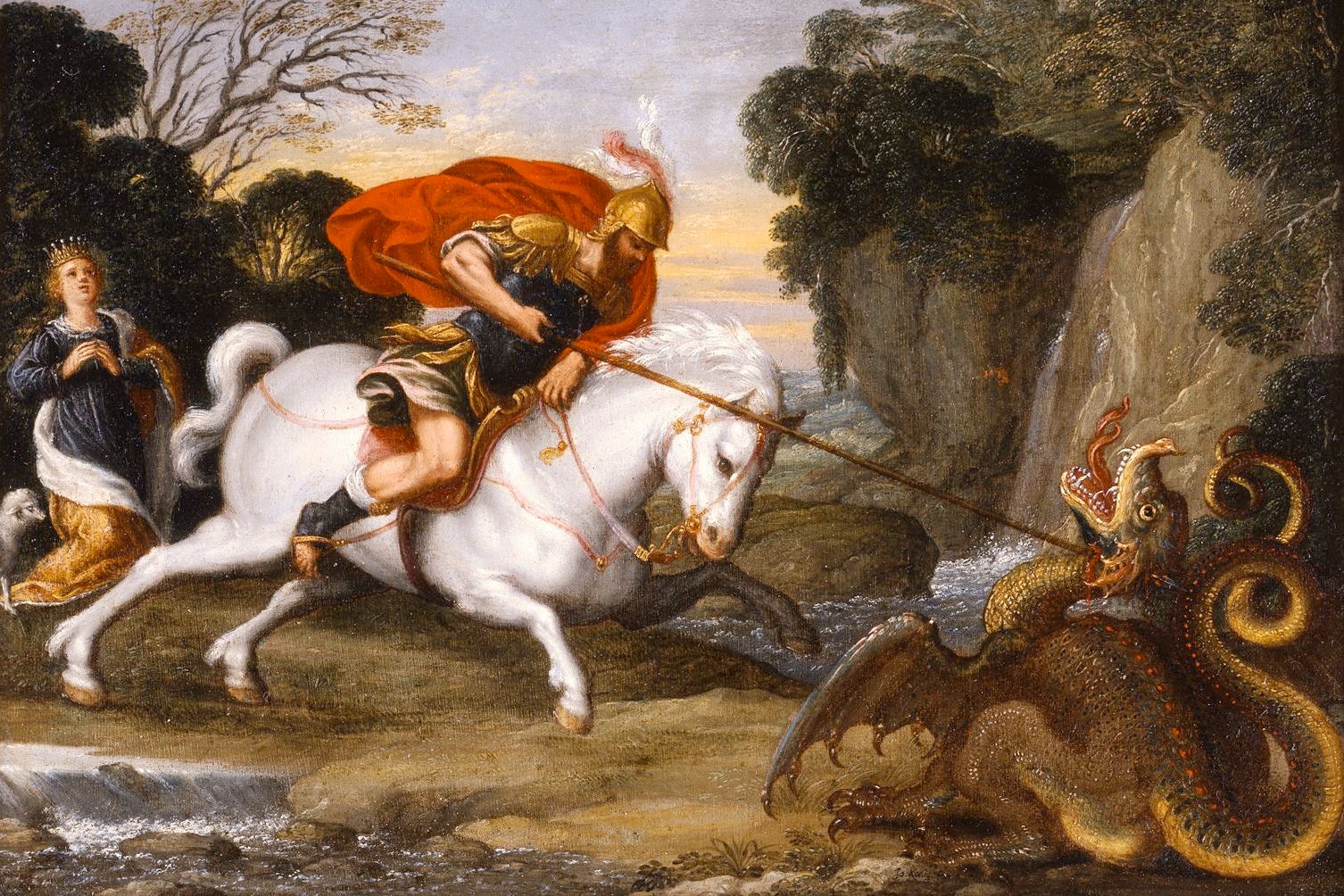 I’m not entirely sure why it was necessary to kill it after it had already been tamed, but I guess that girdle wasn’t going to hold forever. The girdle part might have been added to the story because of King Edward’s Order, although I seem to recall similar accounts of unicorns being tamed by maidens. It’s likely that the association with dragon slaying was transferred to George from another lesser known saint, Theodore Tiron, who was also a Roman soldier, so maybe their iconography was mixed up.

It does kind of seem like his killing only one dragon is an example of how Christian mythology just isn’t as impressive as the classical pagan kind. Just look at how many monsters Hercules killed! But that’s probably cherry-picking. And in at least some more recent fiction, George has been interpreted as kind of the default dragon killer, a fantastic exterminator of sorts. He isn’t the patron saint of exterminators, though; that’s St. Patrick, who’s credited with a pest control job for an entire country.

As far as what I’ve read that involves St. George, Kenneth Grahame’s The Reluctant Dragon comes to mind, where the saint is called in to slay a harmless dragon who writes poetry, but they end up faking the fight. I don’t remember Tom Holt’s take on it, Paint Your Dragon, all that well; but I know it made George an obnoxious guy who hung around with demons, while the dragon wasn’t hurting anyone. L. Frank Baum’s The Enchanted Island of Yew has an aged and ailing dragon terrified that Prince Marvel might be St. George in disguise. Edith Nesbit had “The Deliverers of Their Country,” a tale where St. George, somehow still alive and sleeping in a church with his name, helps some kids to remove a plague of dragons. Diana Wynne Jones’s Witch Week doesn’t have the dragon, but does have Chrestomanci clearly state that St. George never existed in any of the Related Worlds. And another one I read, Gordon R. Dickson’s “St. Dragon and the George” (although I later found out it wasn’t the full version), didn’t actually feature the saint, but used “George” as the term that dragons called humans. I’ve always had a bit of an inclination toward sympathizing with monsters to some degree, although I guess it depends on the monster. It seems common as of late for people to sympathize with Medusa, especially in Ovid’s version where she’s raped and then punished for it. But even in earlier tellings that don’t have that back story, she seems to have mostly been keeping to herself when Perseus showed up to kill her, not rampaging around like some kind of Minoan Bull or Caledonian Boar. But getting back to dragons, they often tend to be more eloquent and noble in modern works. Even the purely evil ones are able to carry on a conversation, like J.R.R. Tolkien’s Smaug.

I suppose George’s dragon wasn’t originally thought of as particularly intelligent or capable of reason, but that also means it was probably just doing what was in its nature.

And I suppose I would be remiss if I didn’t include this classic Stan Freberg recording. Devouring maidens out of season is punishable by a term of not less than fifty and not more than 300 years.