Chrono Cross was released about a month ago for the Switch, so I bought a copy. It’s digital, which I kind of don’t trust. I think you have to buy it from Asia if you want a physical copy. But it didn’t cost that much, and changing cartridges on the Switch is kind of a pain. Anyway, the last time I played it was probably twenty or so years ago, when it was still fairly new, and I only made it as far as Fort Dragonia. I’m past that now, so I figured it was a good time to write about it. The follow-up to Chrono Trigger (more on that later) features a boy named Serge, who lives in a small fishing village in the El Nido Archipelago. He finds himself in an alternate world, largely the same but with some significant differences, most notably that the Serge of that world died ten years ago. He joins up with a young thief called Kid, who’s after an artifact called the Frozen Flame and a cat-headed villain named Lynx.

As the game progresses, you have to switch between worlds to find things that exist in one and not the other. 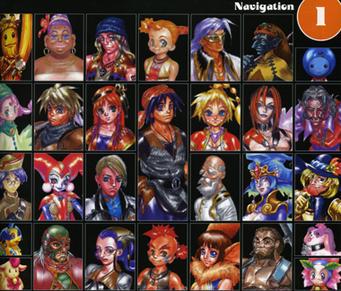 The game has a lot of playable characters, but you can only have three in your active party at a time. I think the in-game excuse for that in Trigger is that only three people can enter a time gate at a time, but I’m not sure there is one in Cross. So far, I’ve recruited a magician, a demi-human with a boat, a mad scientist, a shape-changing animal used in lab experiments, a talking pink dog, and a fairy. They all have their own ways of speaking, like Kid’s Australian accent, Luccia’s German one, and Pip and Poshul’s childish speech impediments. 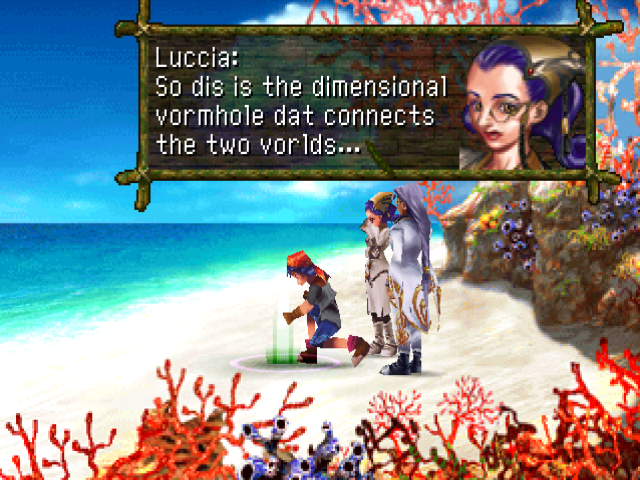 I guess this game did the corny accents and dialects before Dragon Quest started to in the English translations. I know there are some characters who will only join if you make a certain choice. While Trigger had an active time battle system, this one is entirely turn-based, but has some interesting quirks. Instead of just attacking, you get several hits per turn, and can build up to more powerful ones. Instead of the usual spells and items, you have elements of various colors, their potency depending on such factors as a character’s innate elemental color and what other colors have been used recently. 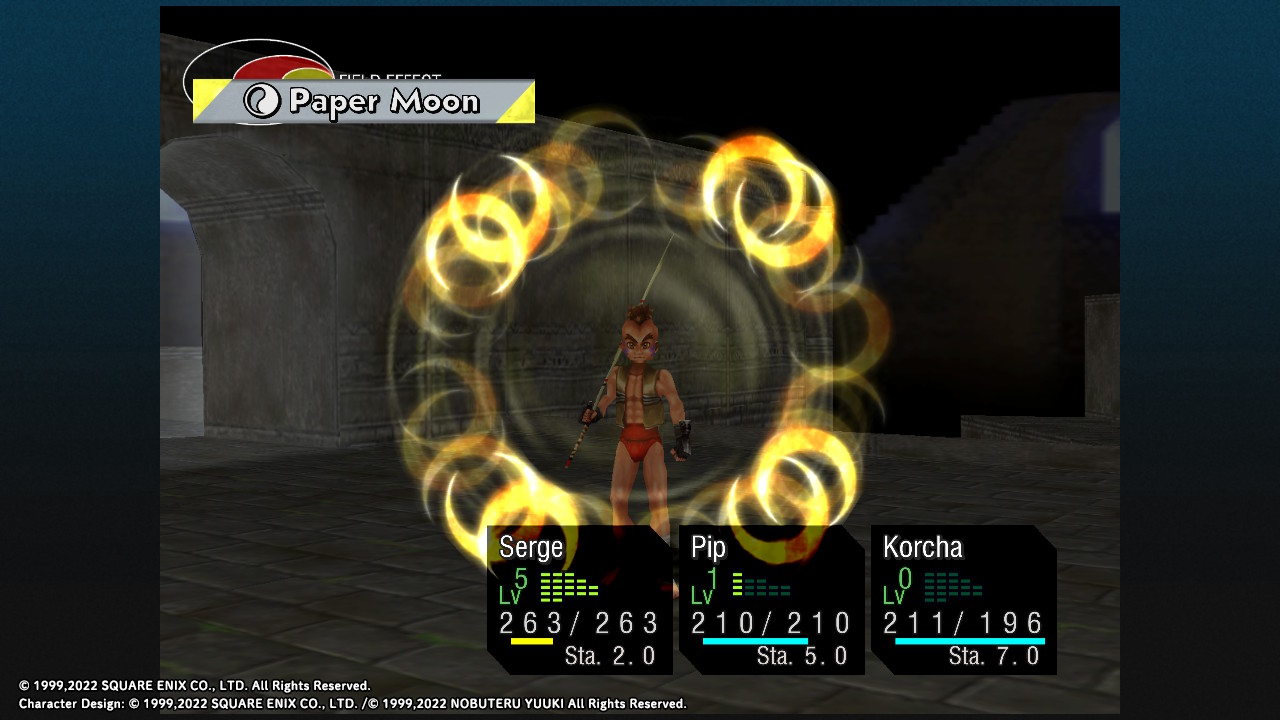 It’s kind of complicated, but I’ve generally been able to muddle through it pretty well, although bosses can require equipping more elements of a specific color. They all reset after a fight. 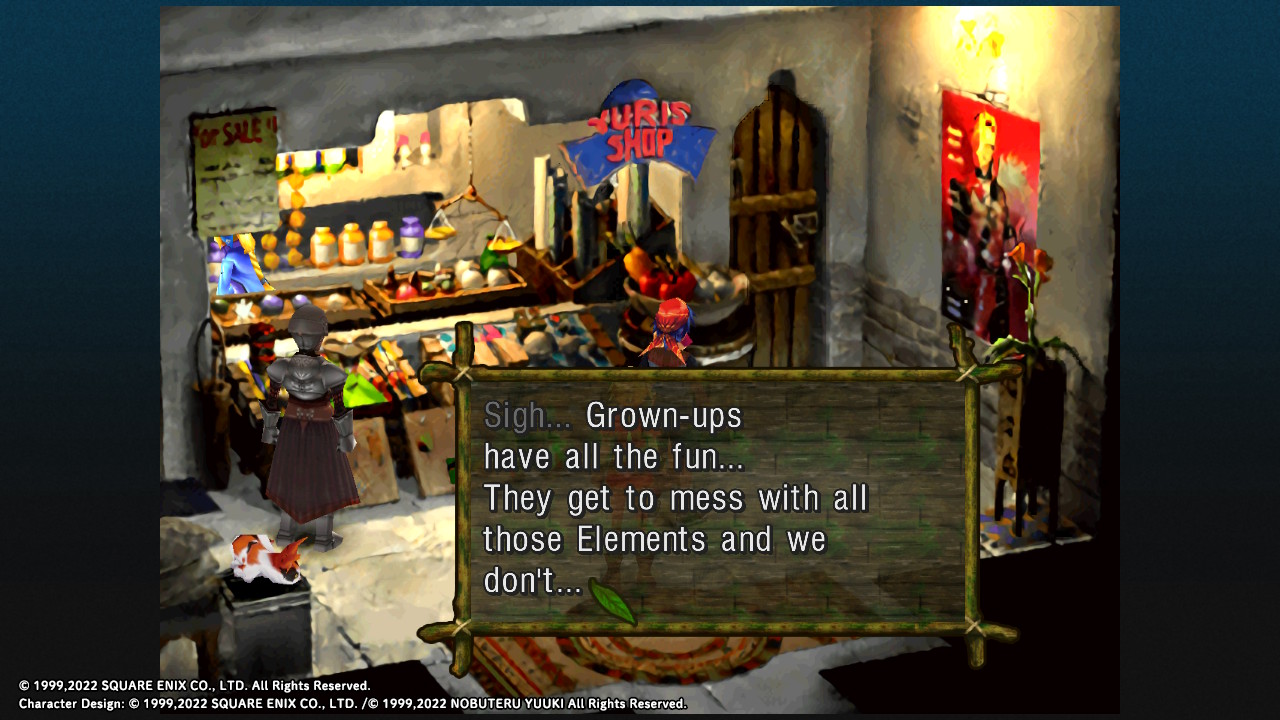 You don’t have the normal experience level system, but instead power up from some regular battles and all of the boss ones. From what I’ve seen, characters you aren’t using also power up somewhat, so you can switch between them without too much trouble. Most recently for me, Lynx exchanged forms with Serge, and banished the hero to a dimensional vortex with an impressionistic design. 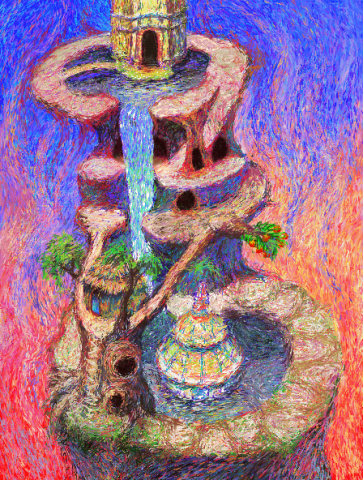 I’m subscribed to a Facebook group about the Chrono games, and there are so many posts there about whether or not Cross counts as a sequel to Trigger. Why there are so many with the same topic, I couldn’t say. Check before you post, people! Some people have quoted an interview where writer Masato Kato says it isn’t actually a sequel, but from context it seems like he means in terms of gameplay. The story definitely results from the events of Trigger, but it features mostly new characters and locations. But I think it does try to split the difference between being a direct and spiritual sequel. None of the main series Final Fantasy games take place on the same world, but they have a lot of recurring monsters, items, and such. Every game has a character named Cid, and he’s usually an engineer, but he’s clearly not the same guy. Cross does a little of that kind of thing, in that some of the characters are very similar in name, appearance, and/or personality to ones from Trigger: Guile and Magus, Luccia and Lucca, Glenn and Frog; and even the delusional Pierre is somewhat based on Tata, the kid who thinks he’s a hero. But at least some of the original Trigger characters are mentioned in Cross, and Luccia is said to have been an associate of Lucca. And there have been some hints that Guile could be Magus, but without his memory so it doesn’t actually affect the plot. I’m sure I’ll have more to say on this topic when I’ve played more of Cross.