Lions Are a Beast’s Best King 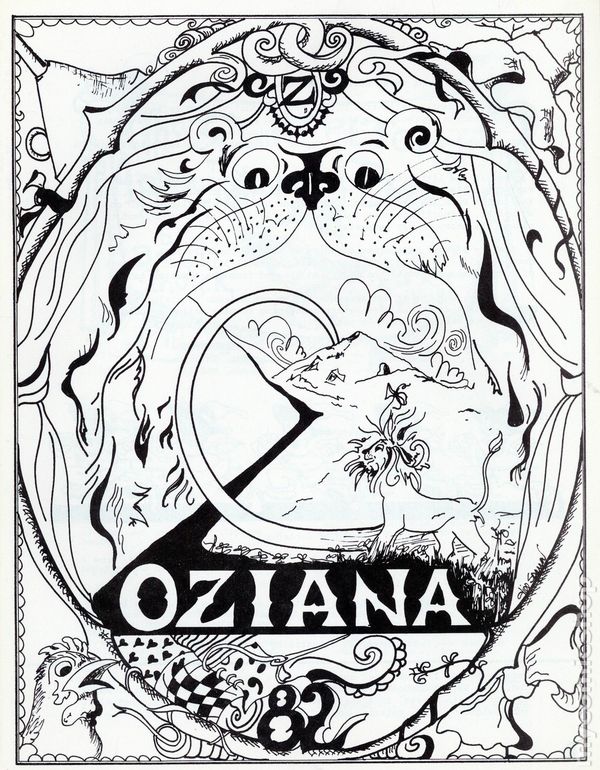 I might as well move on with my Oziana reread to the 1982 issue, which has a rather more abstract and stylized cover than earlier ones. It has a picture of the Cowardly Lion and a mountain inside a larger Lion’s head, and the Scarecrow, Tin Woodman, and Billina incorporated into the border. The artist is Jill Sparrow.

“The Scarecrow’s Appreciation Day,” by Ben P. Indick – We start out with a short play, but still pretty long for this magazine, as per the introduction. That’s probably why the issue has small text set in two columns throughout. The play is much like Ruth Plumly Thompson’s A Day in Oz, with a few Oz characters hanging around talking to each other, interacting with the audience, and making a lot of jokes. It’s mostly just Dorothy, Ozma, the Patchwork Girl, the Wizard of Oz, and of course the Scarecrow. They also reminisce about and reenact past events, including the Scarecrow and Scraps’s first meeting in The Patchwork Girl of Oz, Nick Chopper’s first appearance in Land, and Dorothy’s meeting with the straw man in Wizard, although the last one is in the style of the original stage play. Because of the limited cast, some of the lines from these scenes are spoken by different characters. Everyone is planning a celebration for the Scarecrow, who’s still depressed about not having a family. His experiences in Royal Book are mentioned, but he says he never feels like Chang Wang Woe’s family was his own. The Wizard then uses parts of the Scarecrow and Scraps to create three scarecrow children. Kim McFarland did something similar years later with her “Labor of Love.” I have to wonder if this play was ever performed, or just printed. Rob Roy MacVeigh provided the illustrations.

“The Change Made by the Magic Turnstyle,” by Edith Ellen Reuwer and Jay Delkin – This was written by a young author and punched up a bit by Delkin, but obviously without changing all that much. I guess I have mixed feelings on this, as I’m sure it’s exciting for a kid to see their own work published essentially as-is, but I also think there were a few minor alterations that could have been made to resolve contradictions. The basic idea is that Dorothy uses Jenny Jump‘s Turn-Style (which is spoken of as if no one has used it in over thirty years), and an unseen temperament button turns her into a tyrant. Maybe this is where the idea for Dorothy Must Die came from. (Okay, probably not.) After Dorothy is changed back, the button is destroyed. It’s not entirely clear whether anyone was aware of the temperament button before this, as it’s said that it “could not be seen by human eyes,” but Jenny seems to know about it later on. I suppose Jenny could have seen it with her fairy eyeglass, but when? The story also uses the idea from Wishing Horse of the Soldier with Green Whiskers’ beard turning red when danger is near.

“The Cowardly Lion and the Courage Pills,” by Glenn Ingersoll – Glenn, who wrote this when he was sixteen, has said that this one was largely inspired by Thompson, which is likely why it includes Herby the Medicine Man and the Magic Fan from Royal Book. Thompson was also known to sometimes make the Lion way more fearful than he ever was in Baum, and that’s the case here. The Wogglebug, with assistance from Herby and the Wizard, tries to find a cure for the Lion’s cowardice.

While the pills they make don’t actually improve the cat’s courage, they do help to keep him awake during an invasion by the Blorgens, evil creatures who look like tiny rose arrangements and can put flesh-and-blood beings to sleep.

Illustrator David Ingersoll offered his take on their appearance. The Wizard explains that they had been put to sleep for 1000 years by Nelebel, the fairy from Baum’s short story “Nelebel’s Fairyland.” And it ends with a gag.

Next issue, we have giants, big noses, and small vignettes.