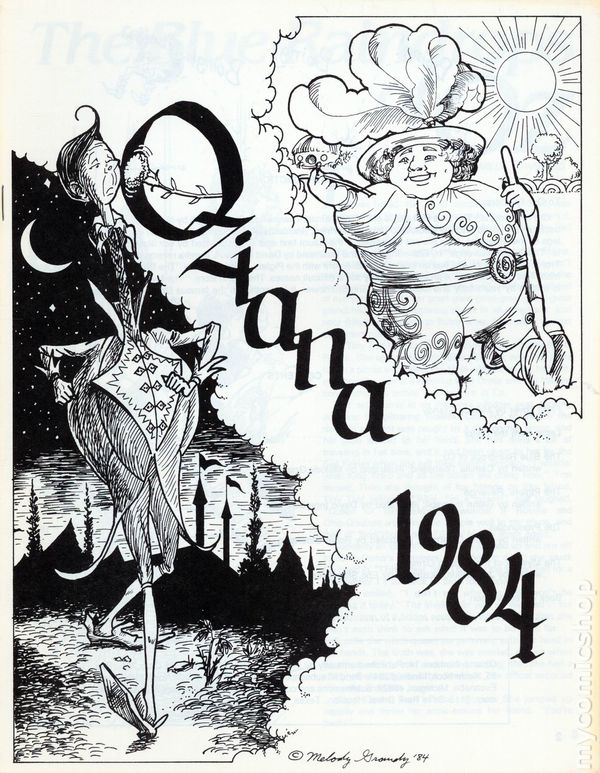 I guess it’s time for Oziana 1984. The cover by Melody Grandy shows a typical inhabitant of the Pink and Blue Countries of Sky Island, which is relevant to the first story. The introduction explains that, since L. Frank Baum’s text didn’t mention the curled arms and legs that John R. Neill gave the Blues, she didn’t draw them. Maybe Neill meant them to go with the winding cords that the Blues use as weapons.

“The Blue Raindrops of Oz,” by Camilla Townsend – This is largely a sequel to Sky Island, with Trot’s return to the place she conquered and the former Boolooroo of the Blues still causing trouble. He comes across a chest of magic and a statue of a brownie, which he brings to life.

With his newfound powers, the villain turns people in the Pink County into statues, but the brownie comes to realize that his master is doing something wrong. The brownie turns out to be the Rain King‘s daughter Sapphrisse, enchanted by a magician named Thorgose who was bent on world domination.

The character Thorgose, who doesn’t actually appear here, intrigued me, so I used him in a short story I wrote, although I don’t know that I’ll ever do anything with it. It also includes characters from The Laughing Dragon of Oz. The author, who wrote this as a teenager, is apparently now a professor specializing in Native American history, which is pretty cool. She read the story for YouTube.

“The Piglets’ Revenge, or How Eureka Became Pink,” by Glenn Ingersoll – There have been a few different attempts to explain the mystery of how Eureka, originally a white kitten who looked pink under the light of one of the Mangaboo suns when introduced in Dorothy and the Wizard, actually is pink in later books. It’s said to be the result of light manipulation in Gili Bar-Hillel’s “Pigmentation,” a magic amulet in Chris Dulabone’s Colorful Kitten, and a color-affecting insect in David Hulan’s Eureka. In this tale, she’s confined to a room in Ozma’s palace and blames the Nine Tiny Piglets, even though she was the one who caused trouble in the first place. When she escapes from her room, she chases the Piglets with the intent to eat one of them, but falls into a tub of the Wizard’s permanent pink dye. Then, true to her character, she tries to turn her pinkness into a point of pride. Ingersoll gives names to all of the Piglets in this story. David Ingersoll was again the illustrator for this one.

“The Pronunciad,” by Robin Olderman – Playing on Alexander Pope’s Dunciad, these three verses are about names in the Oz books that are often mispronounced, or for which there is no official pronunciation: Ev, General Guph, and Kalidahs. I’ve never thought of Ev as being pronounced with anything other than a short E, but I have heard it said “eve” on occasion. For Guph, as Eric Shanower pointed out, he’s not a goof, and he has plenty of guff. “Kalidah” is trickier, but I say it like the beginning of “kaleidoscope.”

“The Mystery of the Missing Ozma,” by Jay Delkin – I believe this is the last of the Great Detective stories, and even though Melody was involved in this issue, the only one she didn’t illustrate. Instead, Shanower, who co-wrote the first of these tales, did the pictures for this one. While every one of these Detective stories has an element of parody, here it’s very much brought to the forefront.

When Ozma goes missing in a situation remarkably similar to that in Lost Princess, the Detective and his unidentified biographer (an illustration suggests it might be Baum himself) goes searching for clues, and finds out that the culprit is Ugu the Shoemaker‘s twin brother, also named Ugu. The Wogglebug solves the problem by using a wishing pill to wish the whole thing had never happened. Another amusing moment is when Dorothy volunteers to be “a member of the successful search party.” While “A Study in Orange” had Ozma turning Toto into a bloodhound, here the Detective is assisted by a dog named Ozzy. Dr. Nikidik appears here as an assistant of the Wizard’s and brother of Dr. Pipt‘s, a very different portrayal than in John Philip Lewin’s books; but in line with the reformed Nikidik of Hugh Pendexter’s Wooglet. It’s pretty silly that Ugu’s brother would be almost exactly like him, but it is an intriguing idea. The only specific difference we’re given is that his castle is made of grass instead of wicker. Maybe this means he worked as a landscaper or groundskeeper, but then, the other Ugu made shoes, not baskets.

The back cover artist is anonymous in the issue’s credits, but maybe somebody knows who it is. They provided a drawing of the Queen of Corabia with the dog Confido. This canine ended up living with Marygolden in Yellow Knight, but it’s presumably her mother in this picture.

Next time, we’ll find out about the origin of Jack Pumpkinhead’s clothes, a chaotic situation in the palace kitchen, and how ice cream can come to life.

1 Response to The New Ugu