Radical Dreamer, Wake Unto Me 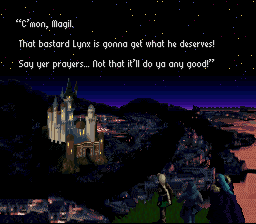 Since the version of Chrono Cross for the Switch is the Radical Dreamers edition, and I’d played through the main game, I figured the obvious thing to do was to check out Radical Dreamers itself. It’s a quite interesting novelty, sort of a prototype to Cross. It was released in 1996, the year after Chrono Trigger, with Masato Kato, the script writer for both Trigger and Cross, doing the honors there as well. It was only released in Japan for the Satellaview, a system that broadcast games online, which I’d heard of as the medium for the version of Super Mario Bros. 2 where you meet the King of Subcon. In 2003, there was a fan translation into English, which included a timely reference to Zero Wing and “all your base are belong to us.” It’s timely in that it’s one of those weird things that somehow becomes popular on the Internet well after its initial release; the game and its notoriously bad translation were over ten years old at the time. And hey, CATS, Lynx–it kind of makes sense. I believe the recent release of RD had the first official translation, keeping some elements from the English version of Cross, including Kid’s Australian dialect.It’s actually a visual novel, kind of old-fashioned for 1996, but they remain popular in Japan even today. It’s a lot like a Choose Your Own Adventure book, or an early text-based computer game. It’s mostly text, with limited graphics and even more limited animation. At various moments in the narrative, you can make one of a few given choices, moving the story in a different way. The plot and characters will be familiar to anyone who’s played Cross, but with some key differences. WARNING! SPOILERS for Radical Dreamers ahead, and a few for Chrono Trigger and Cross as well! Kid has led her band of thieves to a manor to steal the Frozen Flame and kill Lynx. The protagonist and narrator is Serge, but he’s a wandering musician instead of a fisherman, and he fights with a knife. And while there are some hints of attraction between Serge and Kid in Cross, here he’s practically drooling over her, while she makes an effort to remain aloof and act tough. The third member of the group is Magil, a powerful wizard with a lot of secrets. These are the titular Radical Dreamers in this game. While the name is used in Cross, there it seems to just be Kid herself.

The game is quite short to play, but there’s a lot of reading. It wasn’t originally advertised as a sequel to Trigger, and indeed it isn’t until you’re some way through that it references the earlier game, mentioning Porre, Heckrans, the Masamune (although that name isn’t unique to the Chrono series), and eventually Lucca. 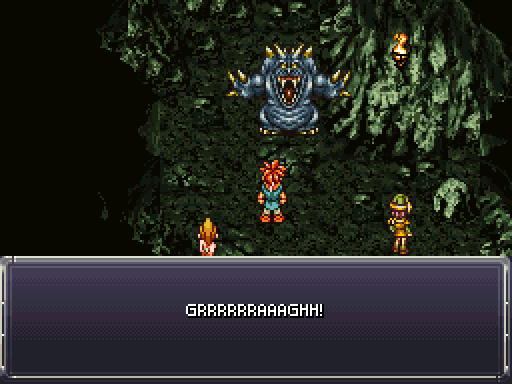 Even then, it seems to remain intentionally vague on some things. Lavos, the Kingdom of Zeal, and Schala are all discussed, but I don’t recall them being named. 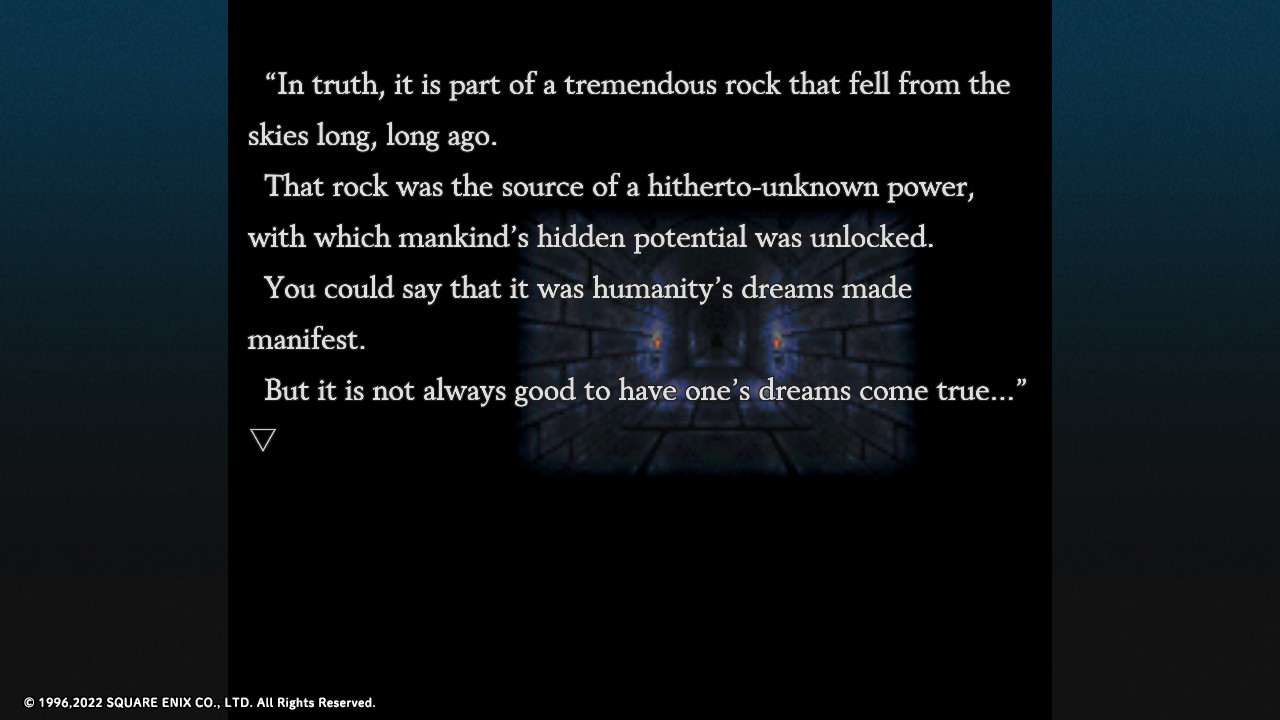 The manor actually belongs to Lynx, who isn’t as cat-like as he would later become in Cross, although the text describes him as having some feline features. 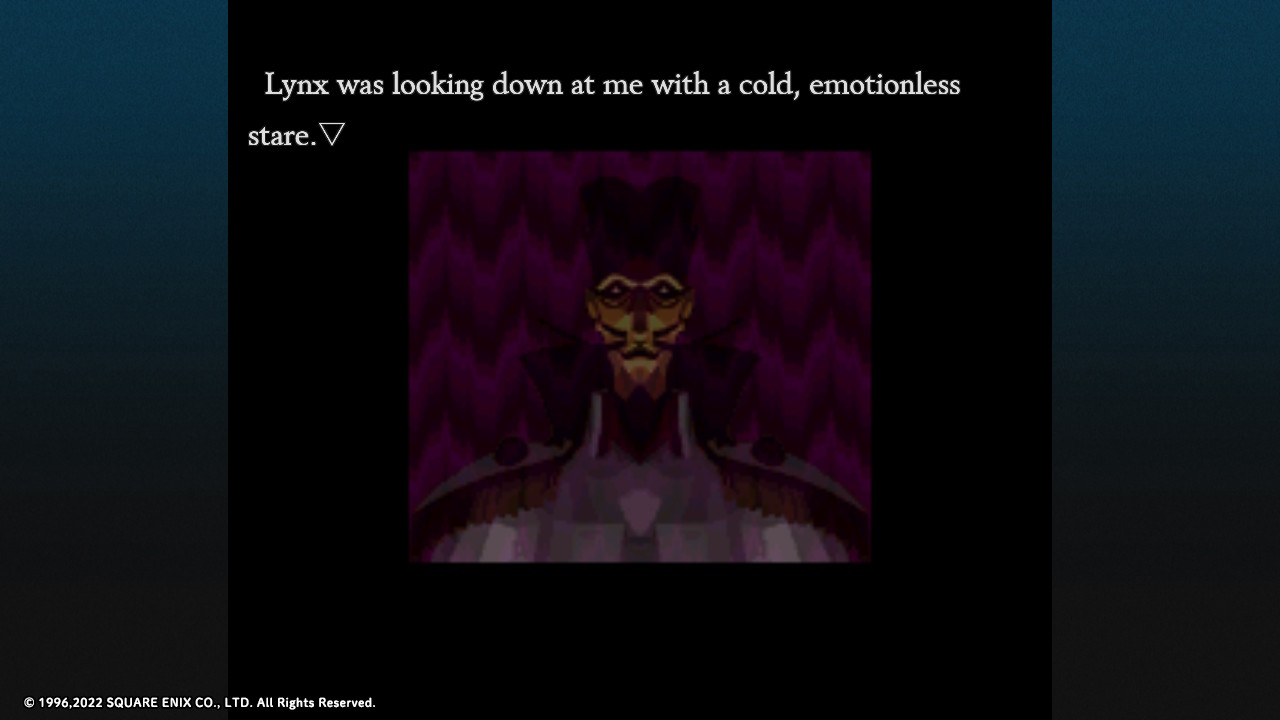 He’s actually the lord of the manor, having taken it over after murdering General Viper and adopting his daughter Riddel. 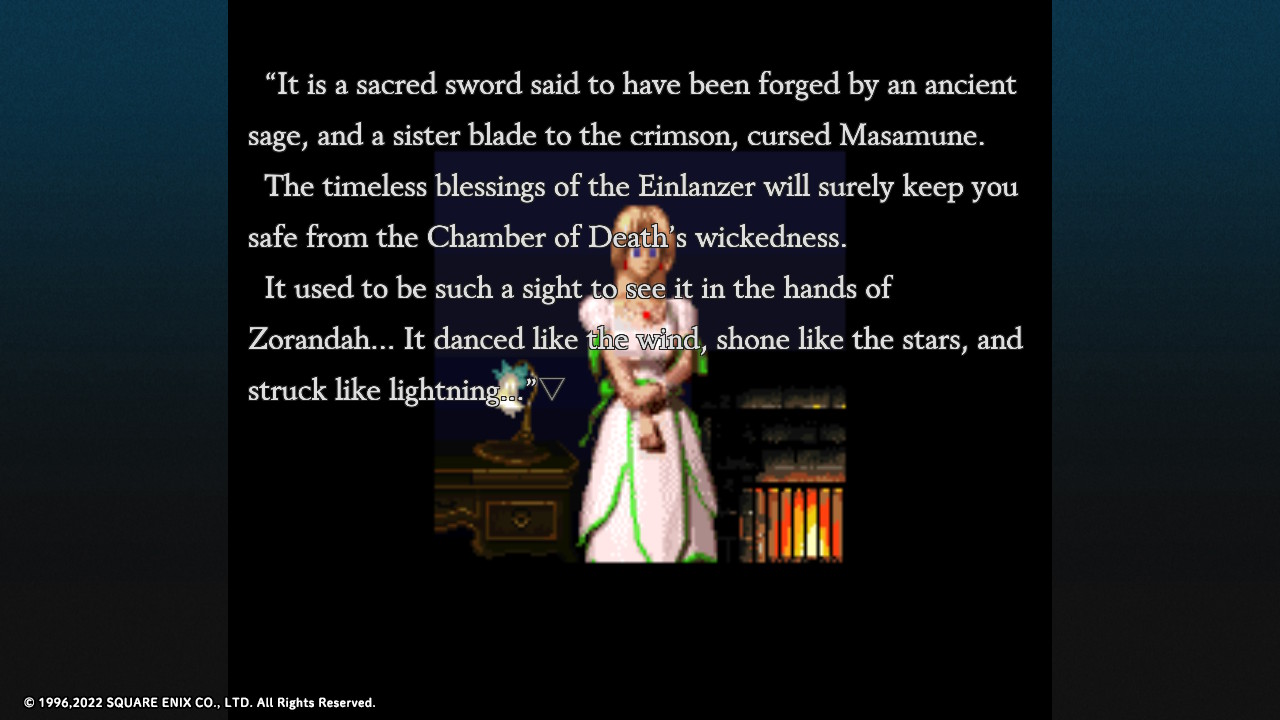 Yeah, she’s blonde here. And I guess Zoah’s name was inspired by Zorandah.
Their territory is in a place called Reggiora, and there are mentions of places called Gailsbourgh and Lake Stoic, none of which made it into Cross. The Acacia Dragoons are part of the back story, and Radius is locked in the dungeon, although no one calls him by name. Magil is obviously intended to be Magus, there to support his reborn sister, but even that is never spelled out. The Cross character Guile, who wears a mask and is one of the choices to infiltrate the manor with Serge and Kid, was inspired by Magil, but whether he’s also Magus is a question on which the developers seem to have changed their mind. He was originally supposed to be, but they made him a separate character. Then, years later, they said he might be the same guy but with his memory gone, so it doesn’t affect the plot at all. 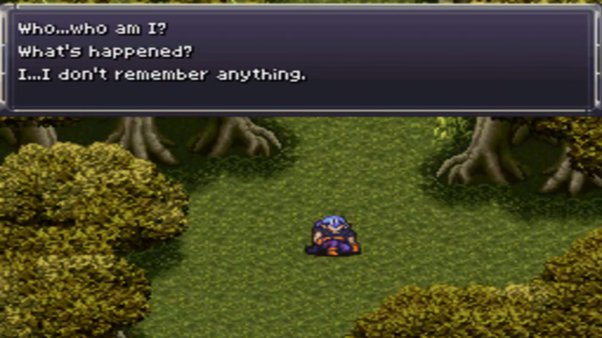 The monsters you run into in the mansion are more generic fantasy types than anything specific to the Chrono world: goblins, griffins, skeletons, and demons. 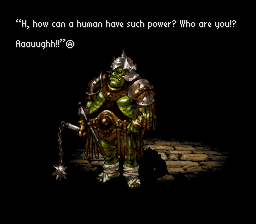 Battles seem fairly random, in that you’re given the choice of a few things to do, but you can’t tell what’s going to work ahead of time. There’s a meter keeping track of your hit points, but you can’t access it or see how much damage you’re taking, so death can come as a surprise. There’s also one for how much Kid likes you, but you pretty much have to always choose the worst options for it to get dangerously low. There are a few ways to heal yourself found throughout the manor. The frame story for the game is that Serge’s grandson of the same name is reading an account of the adventure that the earlier Serge wrote, and at the end he’s said to have a friend who’s basically the same as Kid. Once you’ve finished, you can access a few alternate endings, some of which contradict the main narrative. I haven’t seen all of them yet, but I DID watch the comedic one where Magil is a space cop and Lynx an alien octopus. What’s weird is that, while Cross expanded on a lot of what originated in RD, some of the main mysteries, like how Porre became a major military power, the Masamune became evil, and Schala chose this particular time to reincarnate/clone herself into, still remain largely unexplained in the later game. 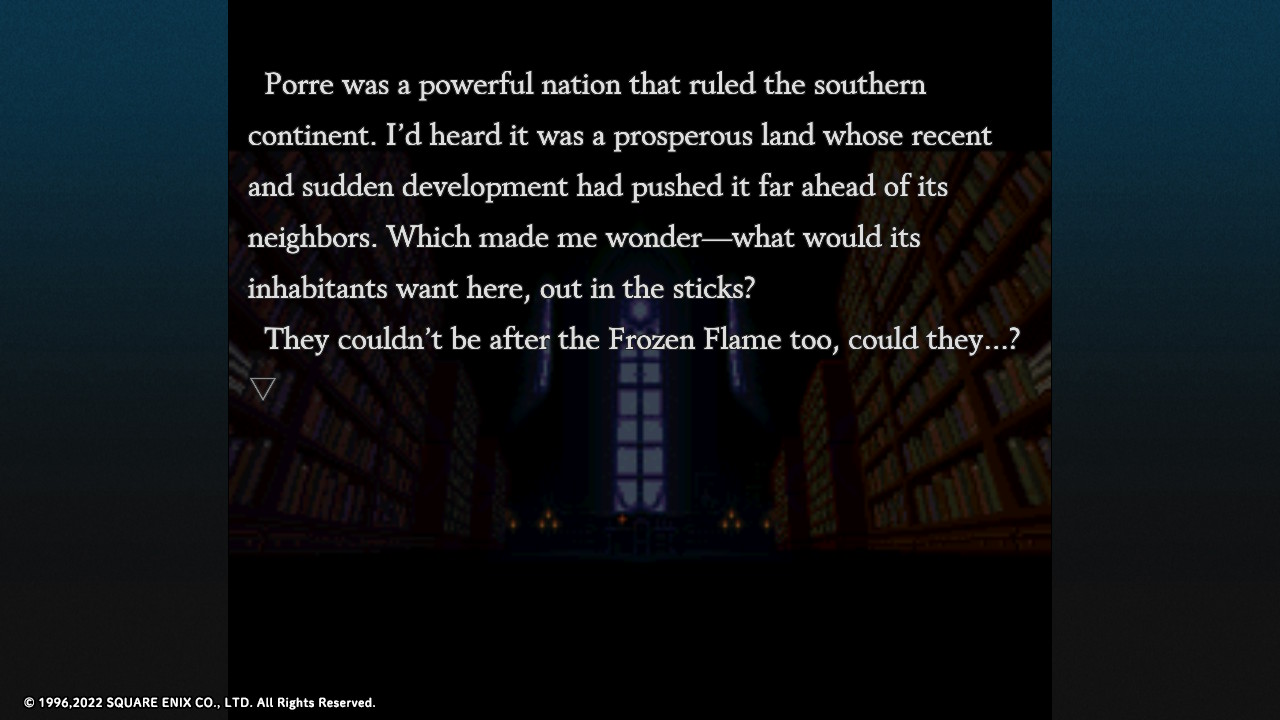 At some point, the developers claimed that it was Dalton who took over Porre and advanced its development, and that the Masamune was corrupted when used in the invasion of Guardia. References to these elements were worked into re-releases of Trigger, but they really seem like something that should have been explained in the first place. 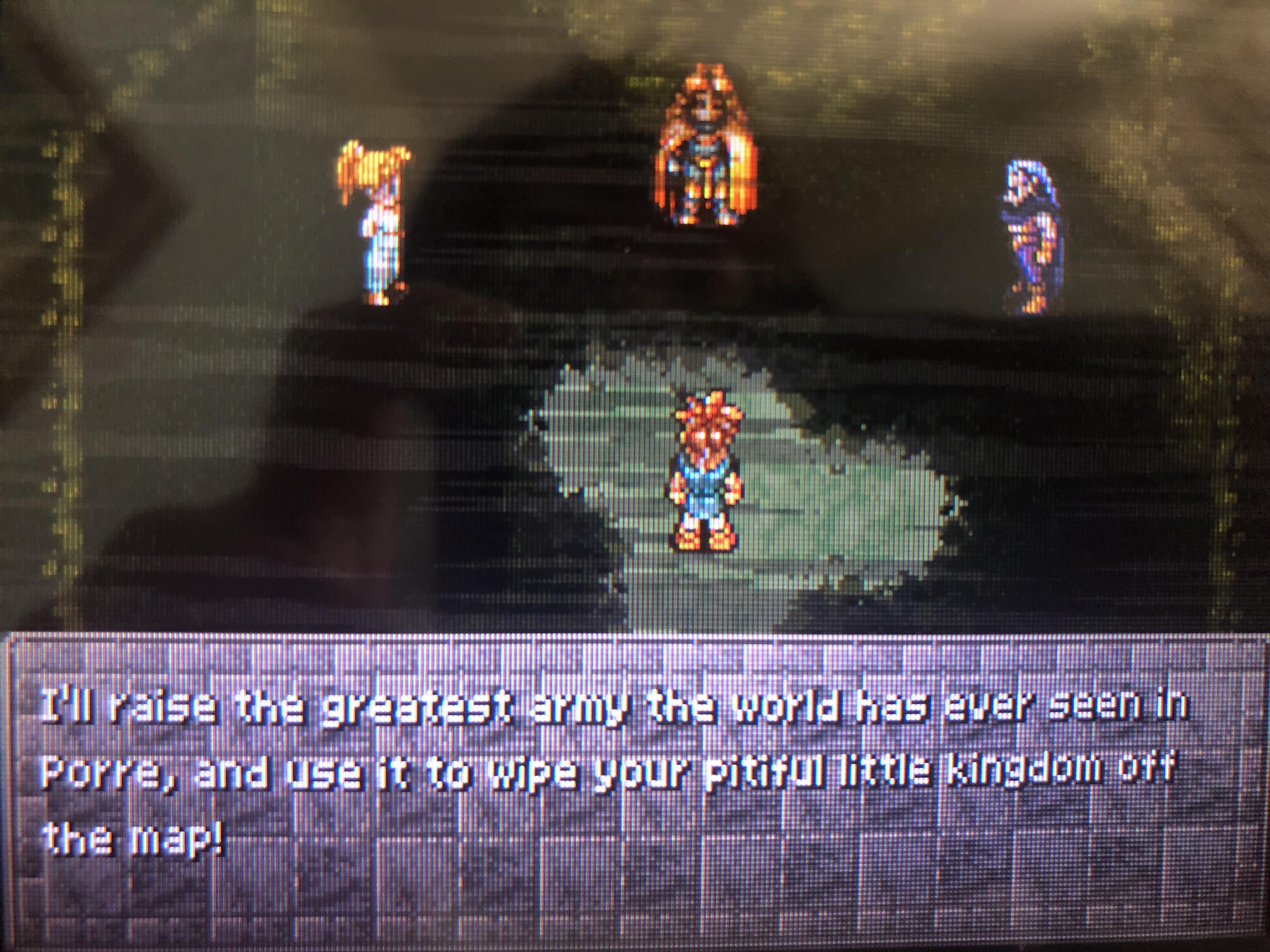 This would probably work better without the advance warning, dude.
A computer in Chronopolis includes a bit of text from RD, with the characters’ conclusion being that it happened in an alternate timeline.

I guess you could say that CT, RD, and CC are the Chrono series, and there’s no indication that anything else is in the works. Back in 2001, there was talk of a new entry called Chrono Break, but nothing ever came of it. I have heard that Another Eden is a role-playing game that has some pretty direct CT references and did a full-fledged crossover with CC. That was originally just a cell phone game, and while I use my phone a lot, I’m not entirely sure about playing through an entire RPG that way. There’s apparently a Switch port in the works, but I wouldn’t be totally adverse to playing the phone version if it comes down to it. I understand it does have in-app purchases, but they’re not necessary to play. I also know Xenogears has some references to CT, as it started out as a sequel, although that’s not how it ended up. 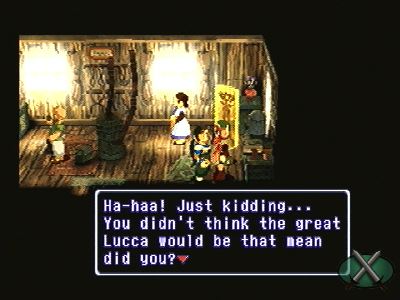 As far as I know, that remains a PlayStation exclusive.